Revisit a vintage, crisp snack that both Jedi and Sith endorsed.

By 1983 Star Wars had pretty much invaded every section of popular culture, media and merchandising. You could buy Star Wars everything -- pajamas, underoos, stationary, toothbrushes, erasers, remote-controlled cars, costumes -- you name it, somewhere in the world, be it licensed or produced by the then numerous and unlicensed cottage industries, it was out there. And kids wanted their snacks to be fuelled by the awesomeness of the galaxy far, far away. We had already seen Lyons Maid release Star Wars ice cream, and Dairy Lee had their cheese squares, while a number of snack companies had brought us a variety of other tasty treats but one thing was missing: biscuits.

Thankfully, here in the UK, we had Burton’s Biscuits on hand to remedy that missing link. Established by George Burton in 1874 in Leek, Staffordshire, by 1935 his descendant Joseph Burton began Burton’s Gold Medal Biscuits as a company. Burton’s developed a reputation for quality biscuits throughout the 1900s and the company established itself in the marketplace, innovating with new methods of baking and sleeker manufacturing processes. Known these days for producing Maryland Cookies, Jammy Dodgers and Cadbury’s Fingers by 1983 they felt the lure of the Force and launched into hyperspace a brand new range. Star Wars biscuits.

Many Star Wars kids in the UK age 35 and over will have fond first-hand memories of these snacktastic biscuits. A dry biscuit sprinkled with mint sugar, they were released back when Burton’s were still known as Burton’s Gold Medal Biscuits and came in a trio of wrappers. 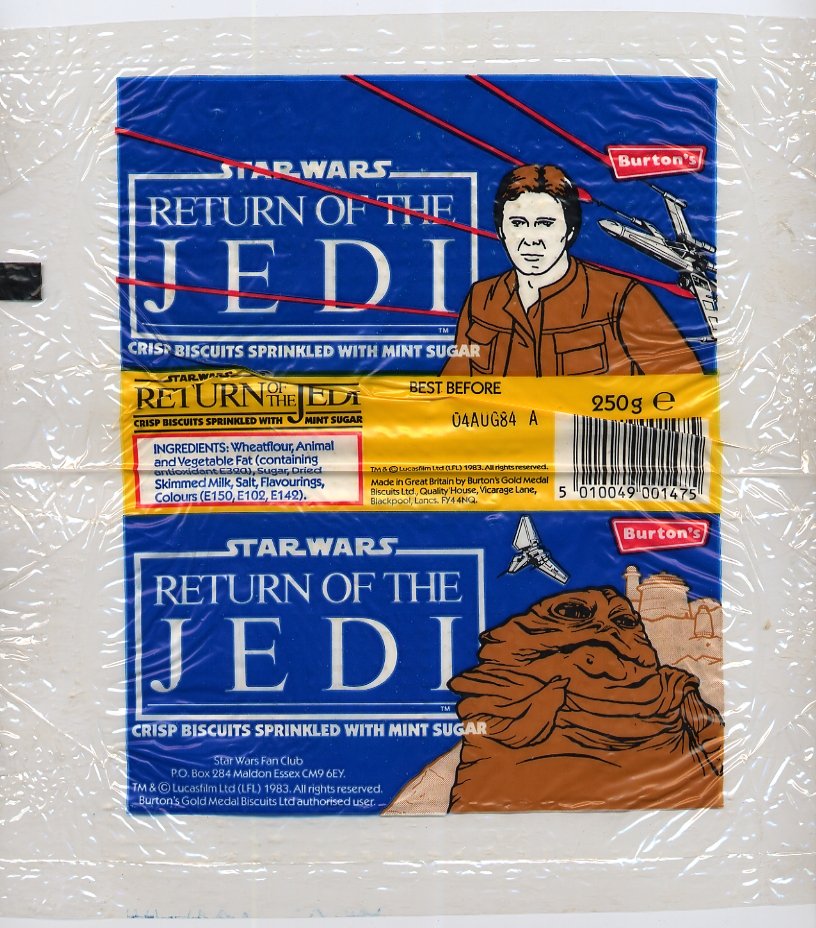 Using clear line art, something which was very prevalent at the time, we see Han Solo in what appears to be his Empire Strikes Back jacket while being strafed by an X-wing fighter. Using just six colors -- brown, beige, black, yellow, blue and red -- the options for correct colors was limited, hence Han’s incorrectly colored jacket. And note the long Return of the Jedi logo on the side of the packet while the oblong logo is used on the front. Both were used in equal measure on most products released during the time of the film while Palitoy used their own version of the logo.

On the other side of the wrapper was Han’s nemesis, Jabba the Hutt. The bloated crime lord sits in front of his beige desert palace while an Imperial Lambda Class shuttle flies high overhead. Thinking logically, the artwork was likely supplied to Burton’s without any context, so having the shuttle sit in a Tatooine setting wouldn’t have been a concern. And hey, as a 12-year-old kid at the time I didn’t care, these were Return of the Jedi biscuits! 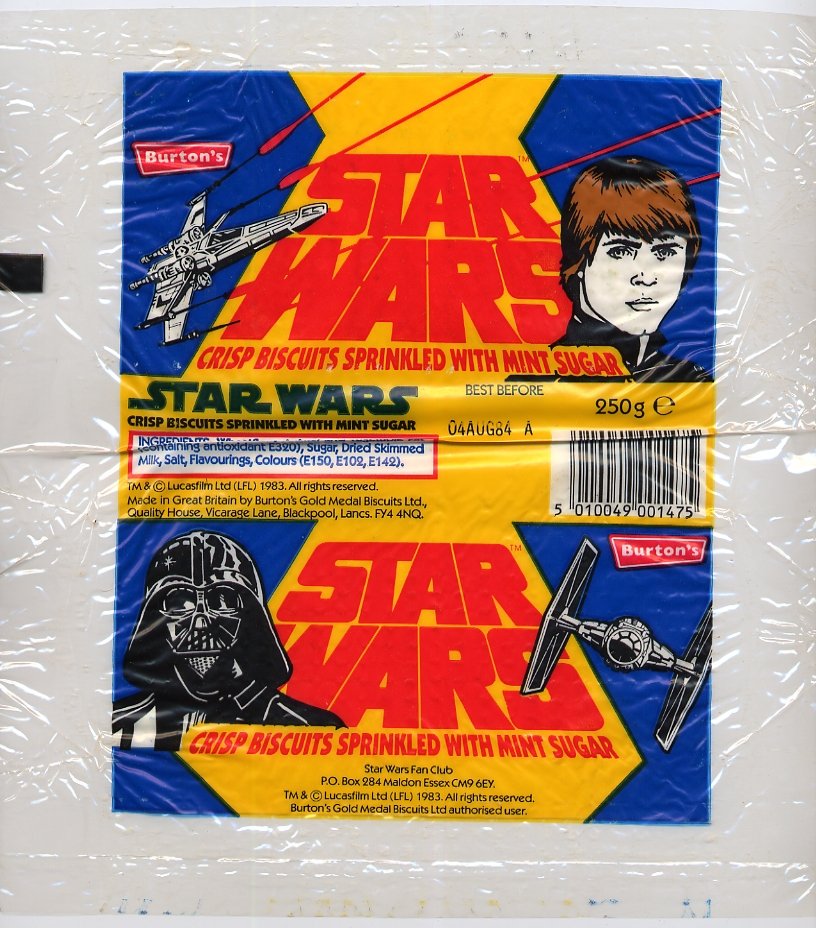 Once again using line art, this shows Luke Skywalker clearly wearing his black Jedi tunic from Return of the Jedi while another X-wing dive-bombs in against a blue background with the classic slanted Star Wars logo behind. Similar to the Solo/Jabba cover, the edge of the packet uses the familiar long Star Wars logo, which is better suited to the side of a packet or package. On the reverse sits Darth Vader against the blue backdrop and slanted logo while on the other side of the pack swoops in a TIE fighter. And here we have the same layout of images -- Luke, X-wing, Vader and TIE -- but this time fully-painted. In the same size 250g packet, we also have images of the biscuits themselves which ingeniously had images of the characters burnt into them.

And a really cool touch is the inclusion of the address for fans to join the Official Star Wars Fan Club. Here in the UK, the club was run from an address in Maldon, Essex, and so UK fans who were fortunate enough to be a fan club member at the time received many letters with this address on it. Another small but evocative element of being a Star Wars fan in the UK in the '80s. Leap forward 14 years and Burton’s came back with a fresh release, housed in a very attractive metal tin to celebrate the release of the Star Wars Trilogy Special Edition. Holding 12 wrappers with individual character wrappers (mixtures of Artoo, Yoda, Luke, Vader, Threepio), the hexagonal tin featured the "20 years" logo surrounded by images of a TIE fighter, an X-wing, the Falcon, and the first Death Star.

On the front of the tin we have a painted image of Luke and Leia in their A New Hope accoutrements with Lord Vader in the background and TIEs and X-wings bussing about. Turning clockwise on the side of the tin, we have a rundown of the story of Star Wars with images of the two droids, the cockpit scene with Han, Chewie, Ben, Luke, and an image of Solo and Jabba from the Special Edition.

Moving to the reverse of the tin unlike the previous releases, The Empire Strikes Back gets a little love as we run through the events of the film along with images of the Hoth battle, Luke and Yoda, and the key scene of Vader and Luke on the gantry of Cloud City. Finally to Return of the Jedi and images of Rystáll, Greeata, and Lyn Me from the Special Edition, Leia, Jabba, Bib Fortuna, and Threepio, and finally Luke and Leia about to swing off the sail barge. Unlike their '80s predecessors, these weren’t covered in mint sugar but were instead mini chocolate chip cookies. Perfect for kids who were always thinking with their stomach.

So there you have it, a brief but tasty trip into the world of Star Wars biscuits. While Admiral Ackbar may shout, “It’s a snack!” and Red Leader may order you to “Lock S-Foils in a snack position,” I’d urge you go hunt these down and add them to your collection. But don’t eat them. Unlike Star Wars itself, they might be just a little bit past their sell by date.

Mark has contributed to Star Wars Insider for almost a decade, is the owner of Jedi News, writes for DeAgostini's Build The Millennium Falcon partwork magazine, the UK’s largest free newspaper The Metro and co-hosts RADIO 1138. He's a Rebel Legion UK supporter, an honorary member of the UK Garrison, and a friend of the Rebel Legion. When he’s not talking, tweeting, or writing about Star Wars, he can usually be found sleeping, where he’ll most likely be dreaming about Star Wars.