StarWars.com speaks with the Toronto Blue Jays pitcher about The Empire Strikes Back, waiting in line to see The Phantom Menace, and more! 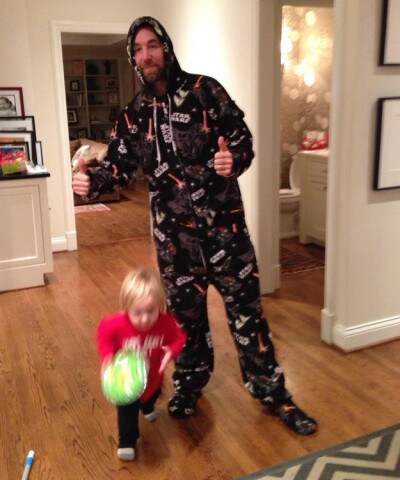 Launching in celebration of Star Wars Day, Star Fans is a new feature in which StarWars.com interviews celebrity aficionados about their love of a galaxy far, far away.

R.A. Dickey, pitcher for the Toronto Blue Jays, is a man of many accomplishments. He's a master of the knuckleball, a Cy Young Award winner, and a New York Times bestselling author. In addition to all this, he's the only player in baseball history to tweet a photo of himself in Star Wars pajamas. StarWars.com recently caught up with Dickey, a Star Wars nerd of the highest degree, to discuss how he discovered the saga, the agony and benefit of waiting for The Empire Strikes Back, and whether he's a little bit Sith.

StarWars.com: Do you remember the first time you saw Star Wars, and the impact it had on you?

R.A. Dickey: Yeah, I can recall, actually. I saw it on VHS, and it had just come out in 1982. I didn't know anything about it, and I popped it in our machine and watched it. At the time I was eight years old, and I was just mesmerized. I think over the course of the next two months, I would get home from school and the first thing I would do was pop it in. I was kind of a latchkey kid, both my parents worked, so there were a couple of hours before they'd get home and I'd just pop Star Wars: A New Hope in. The first two months I had it, I probably watched it 40 times. It was an everyday affair for me.

StarWars.com: So that was '82. The Empire Strikes Back came out in '80. How did you catch up with Empire?

R.A. Dickey: I think 1984 was when Empire came out on VHS, and I had to wait for it. Going to movies wasn't a luxury we necessarily had, and I couldn't wait to rent it. At the time there was a little rental store around the corner, back when you could rent movies on VHS tape.

StarWars.com: I remember those days.

R.A. Dickey: Yeah, man! So like, I would have to go in there and put my name on a list, and I'll never forget bringing home Empire Strikes Back. I'll never forget how just overwhelmed I was when Luke's out there dangling with one hand, and Vader admits that he's his father.

Empire Strikes Back is my favorite. I thought it was so climactic, and I was so impressionable when I watched it. With the first one, it was great. I'm eight years old, I'm watching it, it's incredible. But I had so much time to concentrate on what Empire was going to be like, and to be able to dream up the things I did as a nine- and 10-year-old boy, and to have those things superseded by the movie was pretty fantastic. The only one I saw on the big screen was Return of the Jedi. As I got older, Star Wars has just become woven into my personal culture. StarWars.com: What is it about the films that struck a chord with you, do you think? Is it the imagery, or the characters, or the teachings from it?

R.A. Dickey: The thing that's so beautiful about the movies is, I think there's a very organic growth process that occurs as far as what I loved about it. Originally, when I was eight years old, I didn't really know what metaphor was, you know? I didn't know what certain things represented, or what they could represent in my life. But I was captivated because it was the first movie I ever saw about outer space. The thought of being able to go to alien lands, fly a spaceship, and meet different beings -- it was such a new thing for me. That's really what hooked me in the beginning. And then as I grew, I really started to appreciate the whole dichotomy of good and evil and how it's present in everything. Just the whole metaphor of human nature and giving in to the dark side. [Laughs] And how many moments in my life have I done that? You know, it's incredible to me as I've grown with the movies, how many times I've been Darth Vader and how many times I've been Luke Skywalker. I'm both, I'm both.

StarWars.com: Well, I think you're more Luke than Darth.

R.A. Dickey: [Laughs] I currently relate more to Darth Vader because of my own personal story, and he's such a redeemable character.

StarWars.com: As a character you identify with, what did you think of his turn in Revenge of the Sith? Was it satisfying for you?

R.A. Dickey: Yeah. I really appreciate closure to story, and being an author myself I think it's necessary. I'm not a critic, but I will say that as I've gotten older, I've definitely watched the movies with much more of a "trying to figure it out" mentality. Like, "George Lucas, how are you going to piece this all together for me?" There were only a couple of characters that I didn't really identify with [in the prequels]. So, I was satisfied, and it makes me excited to see what [J.J.] Abrams is going to do with the new ones.

StarWars.com: How did you feel when you heard there would be a sequel trilogy?

R.A. Dickey: You know, initially I was kind of torn. At the same time, I want to see the story keep living on. I'm very excited. I think it'll add a unique new chapter to the franchise.

StarWars.com: What does Star Wars mean to you today? How has it changed for you?

R.A. Dickey: It's something for me to share now. I think, for so long, it was something for me to consume. I wanted everything that had to do with Star Wars for the longest time. I'm almost 40 years old. Part of the coming of age for my boys is getting to watch it on their eighth birthday. They'll watch A New Hope, then on their ninth birthday they get to watch Empire Strikes Back. Every year we get to kind of come full circle and watch a new episode. So it's been a real neat thing to get to share with my eldest son now, and I'll get to watch it with my youngest son when he turns eight years old.

It's become something that I can really bond with my son over and it sparks great conversation. My son just got to watch the first one, and he had all types of great questions about Darth Vader and evil. It's been the genesis of a lot of good conversation that we can have as father and son.

StarWars.com: I can't imagine not wanting to put the next movie on for him right away!

R.A. Dickey: Yeah, I know, I do so badly. I've always thought about that. Of course, we make decisions in our life based on our own experiences. My own experience with the movie was that I had to wait, and it was incredible to see it after waiting two years.

I'll never forget waiting in line. I was a minor league baseball player in Double-A, and I waited in line an hour and a half when Episode I came out. I was with a couple of teammates who were kind of Star Wars nerds, too, and I think it's valuable to marinate in it for a little while.

StarWars.com: Right. I definitely think there's something rewarding about having to wait for the next chapter.

R.A. Dickey: Yeah. It also gives your imagination a chance to really [get creative]. And do you know how valuable that is at that age? I can ask [my son] Eli, "How do you think it turns out between Luke and Leia? How do you think it turns out between Darth and Luke? What do you think about the Millennium Falcon and Han Solo? What do you think happens down the road?" You don't just pop the next one in and get immediate gratification. You really get a chance to imagine it out when you wait. And it's healthy. I think that's a healthy way to watch them. Not that the other way's unhealthy, it's just that for me, that works.

StarWars.com: Finally, your knuckleball. Is that more a light side or dark side power?

R.A. Dickey: I know. I'm not an Empire guy, necessarily, but I feel like that is an Empire pitch. If you remember the scene in A New Hope when they're going down the trench and the TIE fighters rub wings, and Darth Vader's fighter gets catapulted into the black night of space, he's kind of moving like a knuckleball. You know what I mean? And then he regains control. From an imagery standpoint, that always resonated. So I'll lean dark side.