A Duel Changes Anakin’s Fate in Skywalker: A Family At War - Exclusive Excerpt

In the first look inside the upcoming biography, we find a young boy embarking on the adventure of a lifetime among the Jedi.

When I started writing Skywalker: A Family At War, we had already been in lockdown for about 105 days. The COVID-19 pandemic had suddenly and irrevocably thrust the world into a strange new era of isolated uncertainty, as the virus ravaged millions of people. During such a grim period in human history, you can imagine how eager I was to step away from the blaring news headlines and immerse myself in the Skywalker saga.

As Qui-Gon Jinn tells his would-be protégé, “Your focus determines your reality.” The days seemed indistinguishable from one another, but evenings and weekends were reserved for rewatching every piece of Star Wars film and animation that involved the family at the center of the story and rereading every book and comic that touched upon their fictional lives. I was eager to take on the role of space scholar and biographer in the same way I had tackled countless profiles over my years as a hard news journalist. In those days, in each story I aimed to provide a glimpse into someone’s private world so that we might all understand ourselves a little better.

In a similar fashion, the story of the Skywalker clan, our modern mythology, resonates because it serves as a mirror to reflect back our humanity, showing our deepest fears, our darkest impulses, and our staggering capacity for love, forgiveness, and hope in the face of seemingly insurmountable odds. 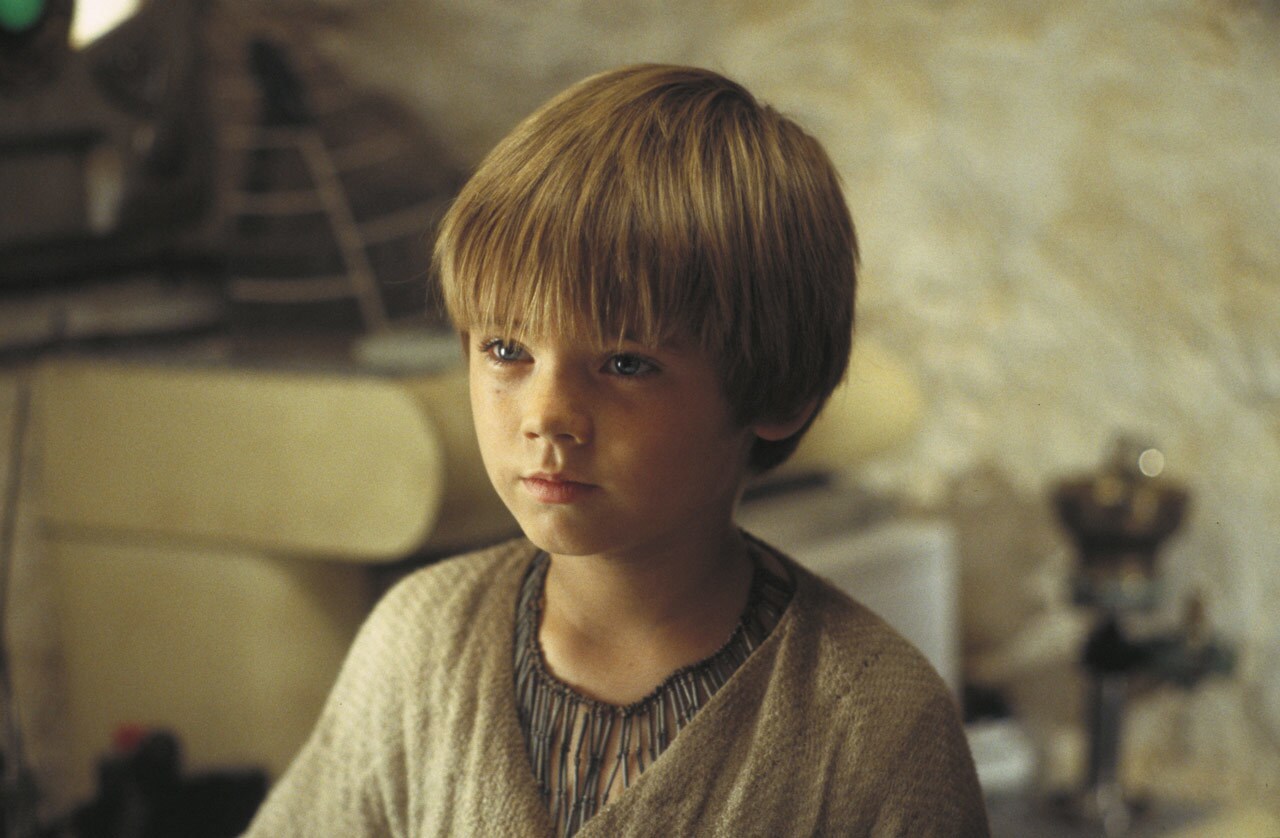 I write this now more than a year after that lockdown. And I can tell you with absolute certainty that my journey alongside the Skywalkers made me feel less alone at a time of great uncertainty. In the first official excerpt from the book, we find Anakin Skywalker on the cusp of his own journey into the unknown. His abilities will change the world around him. His self-discovery will bring elation and tragedy. He will bear the burden of the prophecy of the "Chosen One” and thrust the galaxy as he knows it into darkness.

But at the outset, Anakin Skywalker is simply a nine-year-old boy who had suddenly lost his connection to his normal life and was just as quickly to be cut off from the future Qui-Gon promised him... 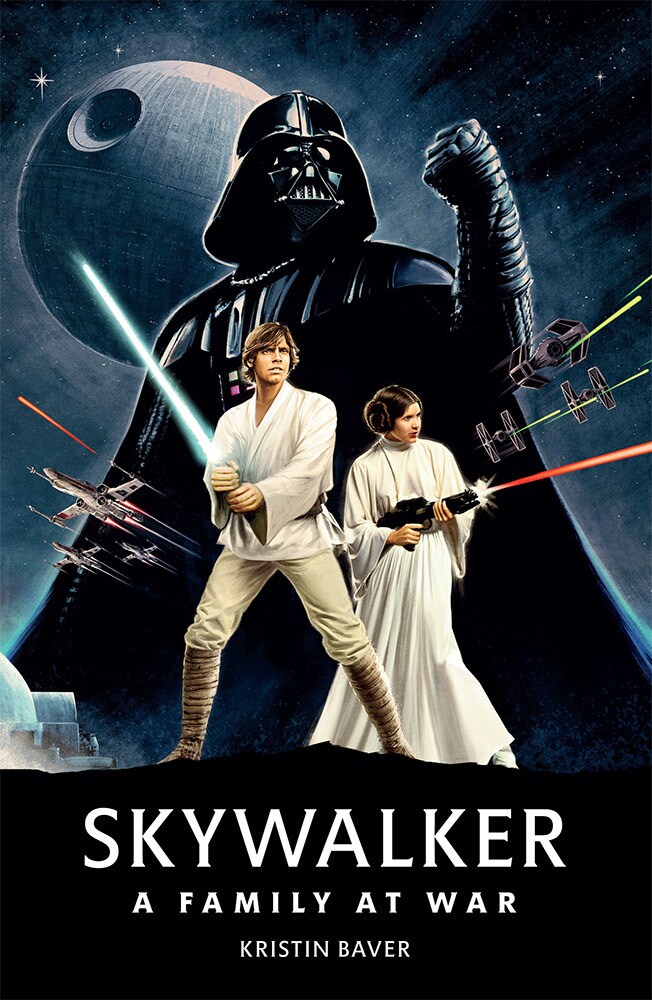 As the Jedi Council gazed upon Anakin for the first time, wise, diminutive Master Yoda sensed that Anakin was gripped by fear. And fear was a dangerous ally. For the Jedi, fear was a path to the dark side of the Force, an entry point to misgivings that could be nursed into anger and hate. Nevertheless, Anakin’s emotional response to his situation, including his fears, was a very human reaction to the sudden upheaval he had experienced in his life; Qui-Gon believed that, with the proper guidance, Anakin’s natural anxieties would subside and be replaced by a Jedi’s clarity of vision. If Jinn was correct, the boy would bring balance to the Force, defeating the creeping darkness that was already beginning to cloud both the Force itself and the Jedi Order’s abilities to perceive the threat to it.

However, where Qui-Gon saw promise, Obi-Wan Kenobi and many on the Jedi Council sensed trouble. Obi-Wan did not hide his concern, even from Anakin himself. The boy’s raw power in the Force was something to be wary of. He was malleable, and in the wrong hands, such explosive potential could be turned to evil.

Few were surprised that Qui-Gon defied the Council’s initial adverse reaction to his request to make good on his promise and train the child. With Obi-Wan almost ready to become a Jedi Knight himself, Qui-Gon was free to take on a new Padawan, and he was determined that Padawan should be Anakin—once the Council came around to the idea, at least.

Qui-Gon began to gently coax Anakin toward a greater understanding in the ways of the Force. If questioned, Qui-Gon would have argued that he was not training the boy, merely providing guidance as a mentor and guardian in his absent mother’s stead. Just as he had done while helping Anakin into his podracer before the Boonta Eve Classic, Qui-Gon offered the boy the benefit of his wisdom: “Always remember, your focus determines your reality,” he told him. “Stay close to me and you’ll be safe.” Those words would resound in Anakin’s subconscious for years to come, an echo of wisdom—and false hope—forming the basis of his doubts that anyone could truly protect him. And if no one could, his young mind reasoned, he would have to become the strongest Jedi who had ever lived in order to protect those around him instead. If he focused hard enough, he could make it come true.

At this time, the unscrupulous Trade Federation was implementing a blockade on the planet of Naboo, stopping all shipments to the peaceful planet in protest over the taxation of trade routes. However, this boycott was merely a clever cover for a plot to invade. While the Galactic Senate sat idly by, Qui-Gon, Anakin, Obi-Wan Kenobi, and the faithful astromech droid R2-D2 embarked upon a mission to protect Queen Amidala and disrupt the Trade Federation’s invasion of her planet. Once on Naboo, Padmé revealed herself to be Queen Amidala and forged an alliance with the Gungan army to mount a counterattack against the Trade Federation invaders. In the midst of their success, Qui-Gon and Obi-Wan once more encountered the beastly Darth Maul. 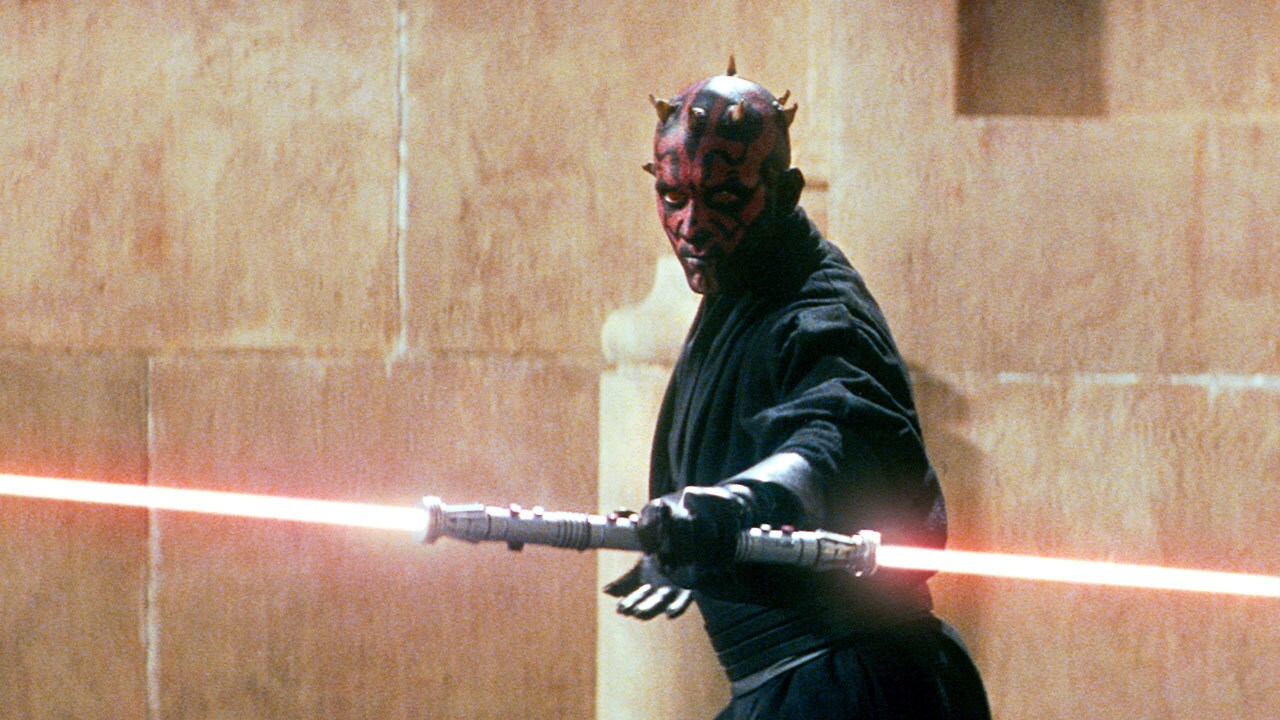 This warrior was strong in the Force and carried a double-bladed lightsaber that burned blood red, betraying his allegiance to the dark side. With his appearance, came irrefutable proof: the Sith, an ancient order of Force-wielders devoted to the dark side, deception, and greed, long thought defeated and destroyed, had returned. Beneath a cloak of secrecy, a new Sith Lord, Darth Sidious, and his apprentice Darth Maul, had risen up, secretly orchestrating the Trade Federation’s invasion of Naboo as their first act in a scheme that would ultimately lead to the last days of the Republic and give rise to the Galactic Empire. In a duel that pitted the light against the darkness, Qui-Gon and Obi-Wan fought Darth Maul, unaware of the true malignant deceit of the Sith at work inside the Galactic Senate. As the Jedi would learn too late, Darth Sidious was really Sheev Palpatine, a placid-looking senator from Naboo who was willing to sacrifice his homeworld to push the peaceful Republic to the brink of war.

As the battle raged, Qui-Gon was pierced by Darth Maul’s blade. Determined to avenge his master, Obi-Wan attacked Maul, but in his anger and despair lost his own lightsaber and nearly his life. Summoning the last of his strength, and empowered by the Force, Obi-Wan called Qui-Gon’s lightsaber to his hand to cleave Maul in two. Thus the apprentice and the sacred weapon came together to avenge the fallen Jinn.

It was too late for medical intervention; no amount of bacta could heal Qui-Gon’s mortal wound. All Obi-Wan could do was cradle his master’s head and heed the Jedi’s dying wish: To train Anakin Skywalker, despite his own deep misgivings.

Had Anakin been more attuned to the Force, he might have felt the tremor as Master Jinn’s life was extinguished. As it was, the boy was doing what he did best: flying. Finding himself thrust into the battle, Anakin and R2-D2 sought shelter inside a Naboo starfighter. Through a combination of smashing buttons and switches to override the autopilot and R2-D2’s navigational skill, the pair managed to take off. Whether by luck or the will of the Force, Anakin piloted his fighter toward the Trade Federation’s Droid Control Ship, which was commanding a legion of mechanical troops on the ground. Landing right inside the vessel, Anakin fired his laser cannons at a handful of B1 battle droids. Just as Qui-Gon had advised, Anakin relied upon his instincts and lightning reflexes—and a lucky shot ignited the enemy ship’s main reactor, effectively ending the battle on the planet’s surface below. To Anakin, the experience of battle was more intense and exhilarating, more thrilling and terrifying than any podrace.

Once back on the ground, Anakin’s thrill of victory was immediately tempered by the crushing news of Qui-Gon’s death. In a few short days, Anakin’s life was completely altered and reimagined by the guidance and teachings of this mysterious Jedi. With his swift demise, all Anakin could think was: “What will happen to me now?” In the darkest corners of his mind, fear sent him spiralling into hypothetical scenarios where he was forced back into servitude, never to see his mother again.

Although no one realized what was at stake at the time, Anakin’s very future hung in the balance. Had Qui-Gon survived and Maul been vanquished, Anakin would have been raised under the watchful, calm tutelage of a seasoned teacher. Although the two would likely have had their disagreements, Qui-Gon’s compassion for the former slave might well have brought about a very different outcome. Perhaps Qui-Gon himself would have helped his Padawan return to Tatooine and free the slaves. At the very least, he would have empathized with Anakin’s restlessness with the strict Jedi Code, offering solutions beyond the scope of Obi-Wan Kenobi’s regulation-driven mind. Perhaps Shmi Skywalker would have been saved. In either case, the predatory Sith Master Darth Sidious may well have had a more difficult time manipulating young Anakin’s future and twisting his many natural gifts into perverse, unrecognizable versions of themselves.

As it was, almost as quickly as he’d found it, Anakin lost the closest thing he had ever had to a paternal presence, a willing guide with an unshakable belief in his abilities. For those precious few days, Qui-Gon was a calm advisor, a much-needed buoy for the stormy passions of the young, Force-sensitive boy. Qui-Gon had perfected the art of meditation in combat, focusing his energy for the most skilled defense in his quest to maintain peace in the galaxy. According to the Jedi Code, even in conflict, a Jedi could stay true to the Order’s teachings by accessing its connection to knowledge, serenity, and harmony instead of giving into emotion, passion, and chaos, using the Force and even their lightsabers only for defense.

The specter of Qui-Gon would loom large in Anakin’s thoughts as he embarked on his quest to become a Jedi and the trauma of losing his master would haunt Anakin in a very different way than the separation from his mother. While Shmi held the assurance of the comforts he knew, Qui-Gon had given him the promise of a meaningful future. The patient Jedi represented a bridge between Anakin’s former enslaved self and the vast unknown, a future of infinite possibilities the boy was only beginning to grasp.

The sole remaining constant in Anakin’s life was the Force itself. The soon-to-be Jedi Padawan could feel the thrum of energy binding the galaxy together. Watching the Jedi Master’s body turn to ash on a sacred funeral pyre, Anakin felt a profound sense of loss. In light of the prophecy, Anakin wondered if his very existence had somehow brought danger upon his kind friend. With Obi-Wan’s help, Anakin hoped to prove Qui-Gon Jinn’s most earnest and heartfelt belief—that he was, truly, the Chosen One.

Pre-order your copy of Skywalker: A Family At War now, available April 6, 2021, wherever books are sold.