Check out new books and covers along with insights from some of the biggest Star Wars authors.

Today at San Diego Comic-Con, fans were treated to something akin to a Jedi Council of Star Wars authors. Lucasfilm creative director Michael Siglain hosted a mega-panel featuring 13 (!) Star Wars writers, whose talents span novels, comics, and children's literature. They discussed projects past and present -- and also revealed some major new titles in the works. See below for some of our favorite insights and anecdotes from the panel, along with covers and details for many freshly-revealed titles. Tom Angleberger on watching the films and writing out Chewie's growls and grunts: "I felt like I started to understand Chewbacca. Like, 'I know exactly how he's going to growl in this situation.' And the fact that he was playing off against Kaytoo who was going to just babble on about everything, that just made it so much fun."

Rae Carson on getting into Qi'ra's head for Most Wanted without having seen Solo: A Star Wars Story: "I did get to read the screenplay, which I loved, and I connected with Qi'ra instantly. I know what it's like to be an ambitious woman in an occasionally hostile world, so I was like, 'Girl, I gotcha. We can do this.' The cool thing about working with Lucasfilm and Star Wars is you have this well of creative talent at your disposal. And I used that. I asked a thousand questions about Qi'ra. I wanted to nail that character." 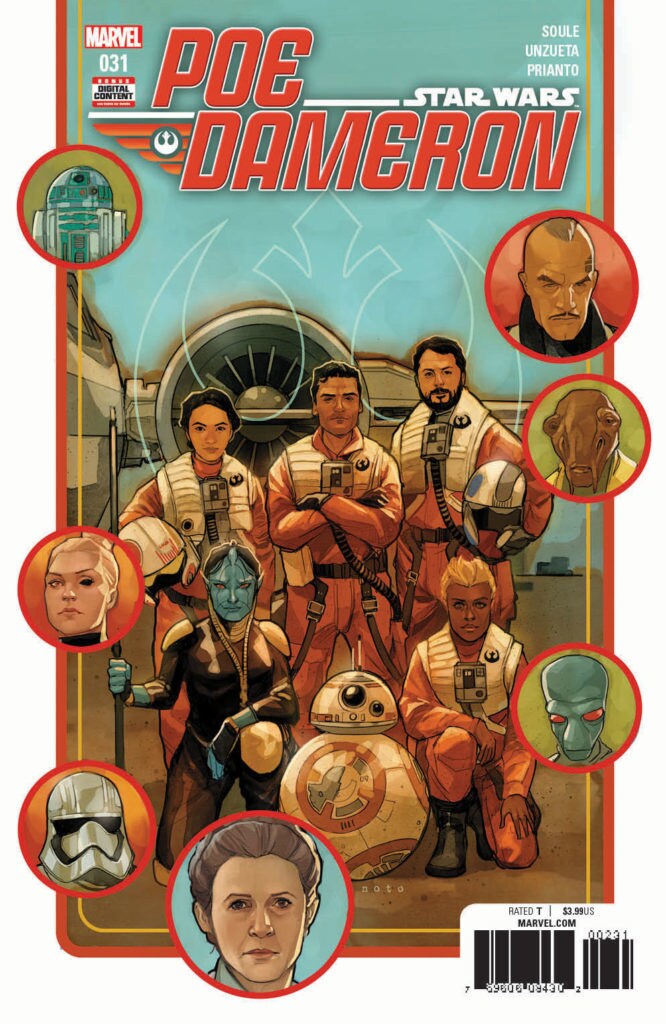 Charles Soule on wrapping up his Poe Dameron comic series with issue #31: “The original publishing plan was for it to stop much earlier, and then it got an extension, and then it got another extension. We were like, 'People really sort of dig this book.'...The reason that we’re going so far as we are with it is because of you guys. You guys embraced it, you like it, you talk about it, you tell your friends about it. So, thank you very much. I loved writing Poe, it's been a blast.”

Charles Soule on the state of the galaxy at the end of Poe Dameron, which is set after The Last Jedi: "The galaxy is devoid of help for the Resistance, and they're just four starships. They're in a tough spot. So that's where we are when the series wraps up. I won't say it's not a happy ending, but it's a tough ol' galaxy out there. It really is."

Daniel José Older on capturing Han in his 20s: "All I had to do was think back on my own mid-20s and the terrible mistakes I made and give them to Han. There we are, literature." 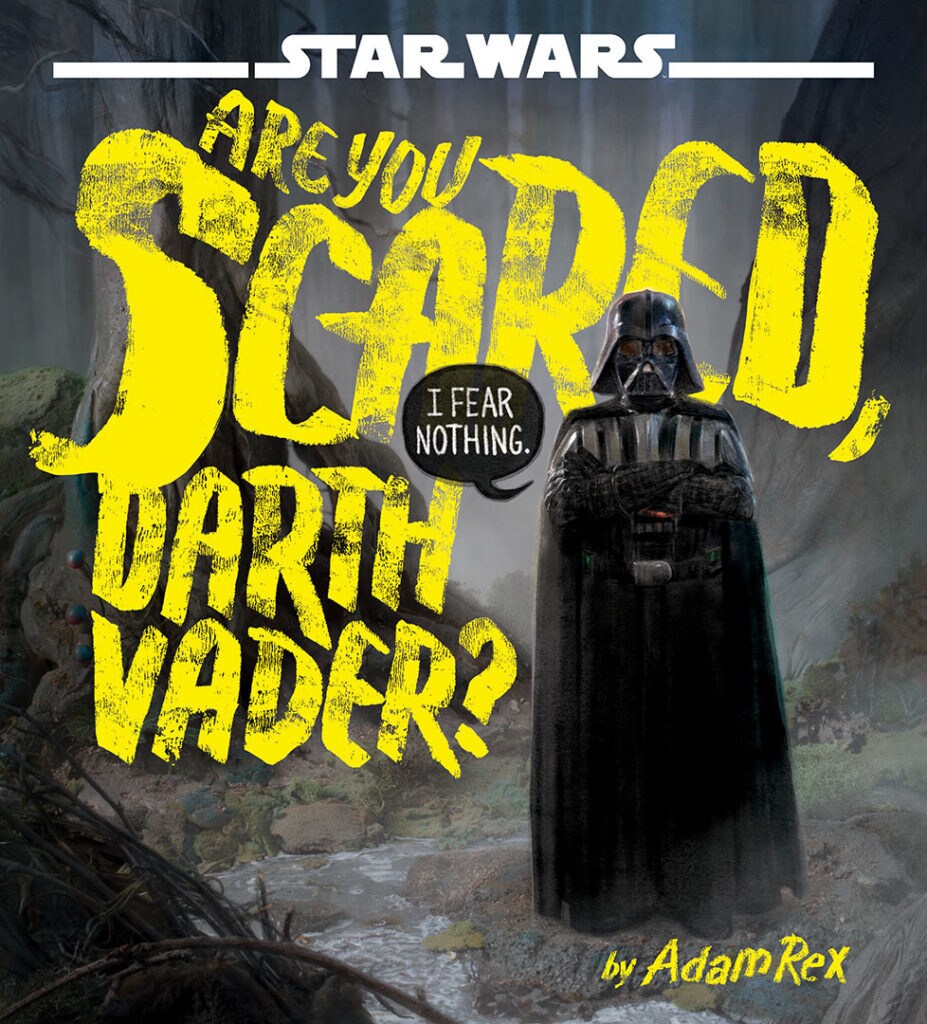 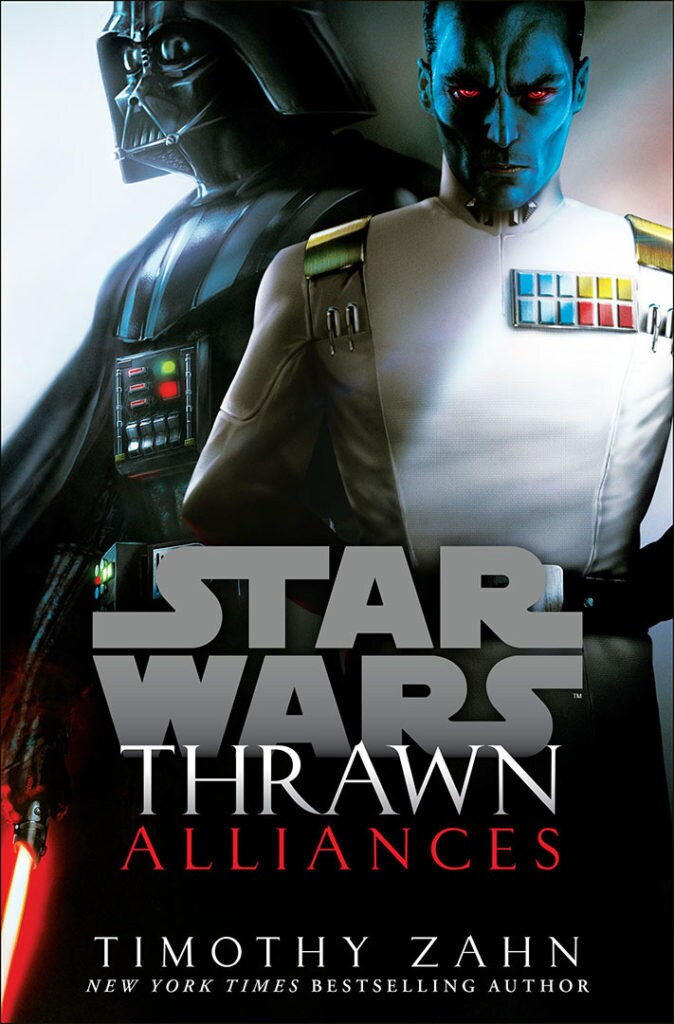 Timothy Zahn on Thrawn facing his future and Vader facing his past in Thrawn: Alliances: "Palpatine tends to have ulterior motives under his ulterior motives. Part of it in this is one is a question of whether Thrawn is completely loyal to him, a question Darth Vader also has. But also a question of, Vader has a past, as we all know, and has Vader completely disassociated himself from Anakin Skywalker and the Jedi."

Timothy Zahn on an essential part of writing Anakin Skywalker: "You can't do a good Anakin story without Padmé."

Katie Cook on the character she enjoys most: “My favorite character to draw is probably Chewbacca. Because he’s so lovable…and will rip your arms off.”

Jody Houser on adapting Thrawn for Marvel: "It's just been fantastic. And I'm glad [Timothy Zahn] liked what we did!"

See below for new covers and details on upcoming Star Wars books! 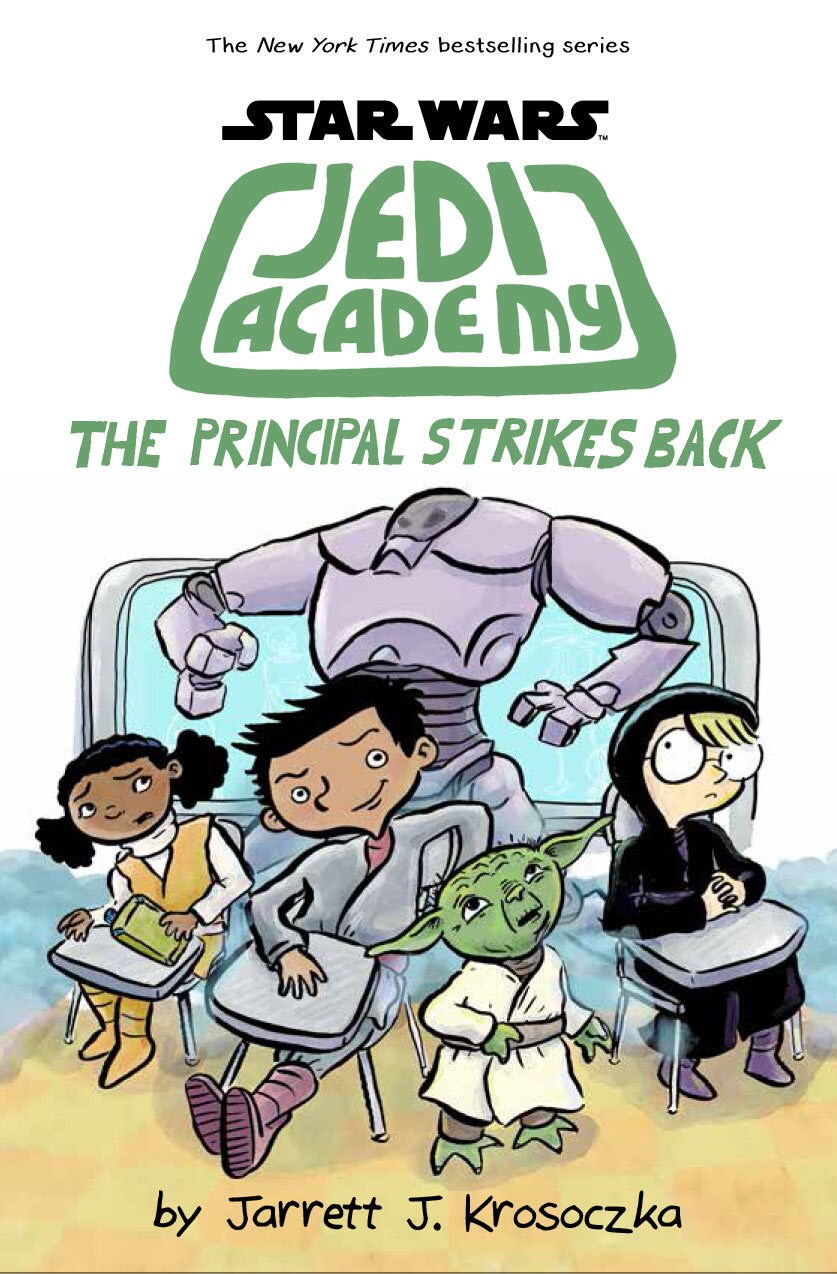 Star Wars: Search Your Feelings
Publisher: Disney Lucasfilm Press
Authors: Calliope Glass & Caitlin Kennedy
Artist: Katie Cook
On-Sale: 10/2/18
Description:
Happy, hopeful, lonely, sad,
Excited, anxious, guilty, mad.
The galaxy is an emotional place.
Feelings are still felt way out there in space.
You are not alone, so don't be blue.
Just search your feelings. You know it to be true!

Katie Cook on what's different about Search Your Feelings: “It was fun because almost everything is a double-page spread in this one. I got to take really iconic moments from the movies and have an entire page to play with.” Star Wars: Lando’s Luck
Publisher: Disney Lucasfilm Press
Author: Justina Ireland
Artist: Annie Wu
On-Sale: 10/2/18
Description: An all-new adventure starring Lando Calrissian and L3-37 onboard the Millennium Falcon. When a smuggling scheme goes wrong, Lando faces an opportunity to do what's right--or do what's best for Lando. If he's lucky, he can do both! A “Flight of the Falcon” tie-in!

Justina Ireland on the story of Lando's Luck: "This is Lando back when he is captain of the Millennium Falcon....He and L3 go on some adventures and they get into some shenanigans, because it wouldn't be a Lando book without shenanigans. It's for younger readers, so it's going to be a more fun Lando. And there's going to be some pew pew pew in there!" Star Wars: Choose Your Destiny (Book 2): A Luke & Leia Adventure
Publisher: Disney Lucasfilm Press
Author: Cavan Scott
Artist: Elsa Charretier
On-Sale: 10/2/18
Description: Join Luke, Leia, and R2-D2 as they attempt to steal the Millennium Falcon and sneak past Mon Mothma to go on a rogue mission for the Rebellion after the destruction of the first Death Star. With over twenty possible outcomes, you’ll have to think like a real rebel to keep Luke and Leia safe from pirates, Imperials, and so much more! A “Flight of the Falcon” tie-in!

Star Wars: Millennium Falcon: A 3D Owner’s Guide
Publisher: becker&mayer!
Authors: Ryder Windham and Cole Horton
Artists: Chris Trevas and Chris Reiff
On-Sale: 11/6/18
Description: This 3D Owner's Guide provides a pilot's insight into every facet of the infamous Millennium Falcon. Each page details the technology and provides notes and commentary from the many crew members who have piloted the Falcon. Each page of this owner’s manual is die-cut so they fit together to create a three-dimensional model of the fastest ship in the galaxy embedded within the book. And now, it has been updated to include material from The Force Awakens and The Last Jedi, making this is the ultimate interactive guide to the ultimate Star Wars ship! A “Flight of the Falcon” tie-in! 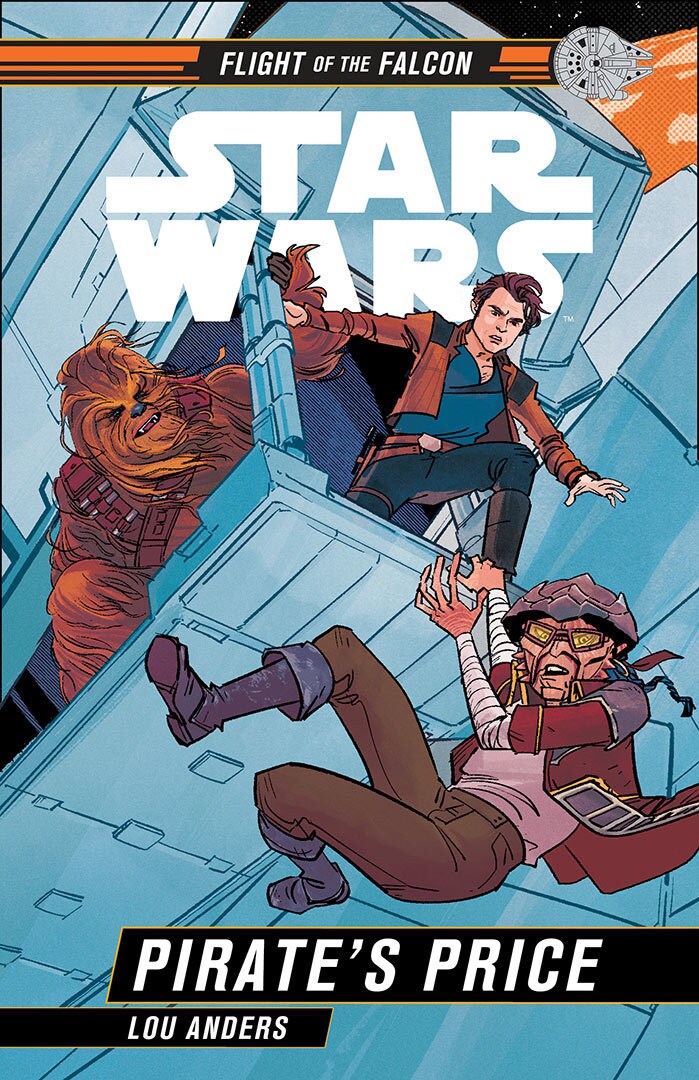 Amy Ratcliffe on the rich variety of characters in Women of the Galaxy: "Something that's wonderful about this book too is, it's heroes, it's Imperials, it's everybody....It's just so cool to me to see them depicted in individual artists' styles."

Star Wars: Queen’s Shadow
Publisher: Disney Lucasfilm Press
Author: E.K. Johnston
On-Sale: 3/5/19
Description: Padmé Amidala served Naboo well as its queen, but now she is ready to begin a new chapter in her life. Then the newly-elected queen asks Padmé to serve Naboo in a new capacity--as its senator. With the help of her devoted handmaidens, Padmé must figure out how to navigate the treacherous waters of politics and forge a new identity beyond the queen's shadow.

E.K. Johnston on Queen's Shadow: "It's the story of Padmé changing from a queen to senator and the person right behind her and all the other handmaidens behind Padmé."

Cavan Scott on the setup of his spooky mini-series Tales from Vader's Castle: "You know how you get those spooky Halloween stories where a car breaks down and there's a creepy castle on a hill. Well, imagine a spaceship landing on a lava planet and the only place is a castle on a hill." Charles Soule on his comic's trip to Vader's castle: "It's all been building to this. From the very beginning of the series, this was always going to be the big huge arc we were building to, which is where does he get that castle?" Solo: A Star Wars Story Novelization
Publisher: Del Rey
Author: Mur Lafferty
On-Sale: 9/4/18
Description: The story of the film, expanded to include scenes from alternate versions of the script and additional content, giving deeper insights into Han’s years in the Imperial Navy, Qi’ra’s past, and the beginnings of the Rebellion.

Michael Siglain on what to expect from the Solo: A Star Wars Story novelization: "Much like what we did with The Last Jedi novelization, this expands the story that you've seen. There are additional scenes, deleted scenes, all these scenes, and we're really happy with it."

Solo: A Star Wars Story Comic Mini-series
Publisher: Marvel
Author: Robbie Thompson
Artist: Will Sliney, cover art by Phil Noto & Leonard Kirk
On-Sale: October 2018
Description: A new five-issue mini-series featuring backstory and scenes not shown in the film! After leaving the Imperial Navy, a young Han Solo seeks adventure by joining a gang of galactic mercenaries—including a 196-year-old Wookiee named Chewbacca and a notorious gambler named Lando Calrissian. But there’s more to the story of the galaxy’s most beloved scoundrel than what you saw in theaters. What happened when Han was an Imperial cadet? Why does Beckett trust him? And what is the connection between the woman who stole Han’s heart and one of Han’s closest friends?

Michael Siglain on why Marvel's comic adaption is a must-read: "Read this one closely, because you don't know where this one is going to head to and connect to in the future." Jody Houser on the Age of Republic series, which focuses on iconic heroes and villains of the prequel era: "It's going to be four months, eight issues, and each month is going to have a hero story and a villain story." Release order: Qui-Gon Jinn and Darth Maul; Obi-Wan Kenobi and Jango Fett; Anakin Skywalker and Count Dooku; and Padmé Amidala and General Grievous.