Meet the Women Working Behind the Scenes of Star Wars

In a special roundtable discussion at the Porsche Experience Center in Los Angeles, the Alliance of Women Directors learned what drives Kathleen Kennedy, president of Lucasfilm, and many more.

Victoria Mahoney was waiting for Star Wars to come find her. As a child, she distinctly remembers sitting in her backyard gazing up at the night sky, a backpack packed for adventure and a sleeping bag unfurled while she waited, watching “looking for someone from Star Wars to come and get me,” she said. “No joke, I thought a ship was going to come down -- preferably Han Solo -- and they were going to land in the tree tops because there were too many trees to land on the ground. And I sat out there. My parents were so wonderful and they let me, you know, until an appropriate bed time.” 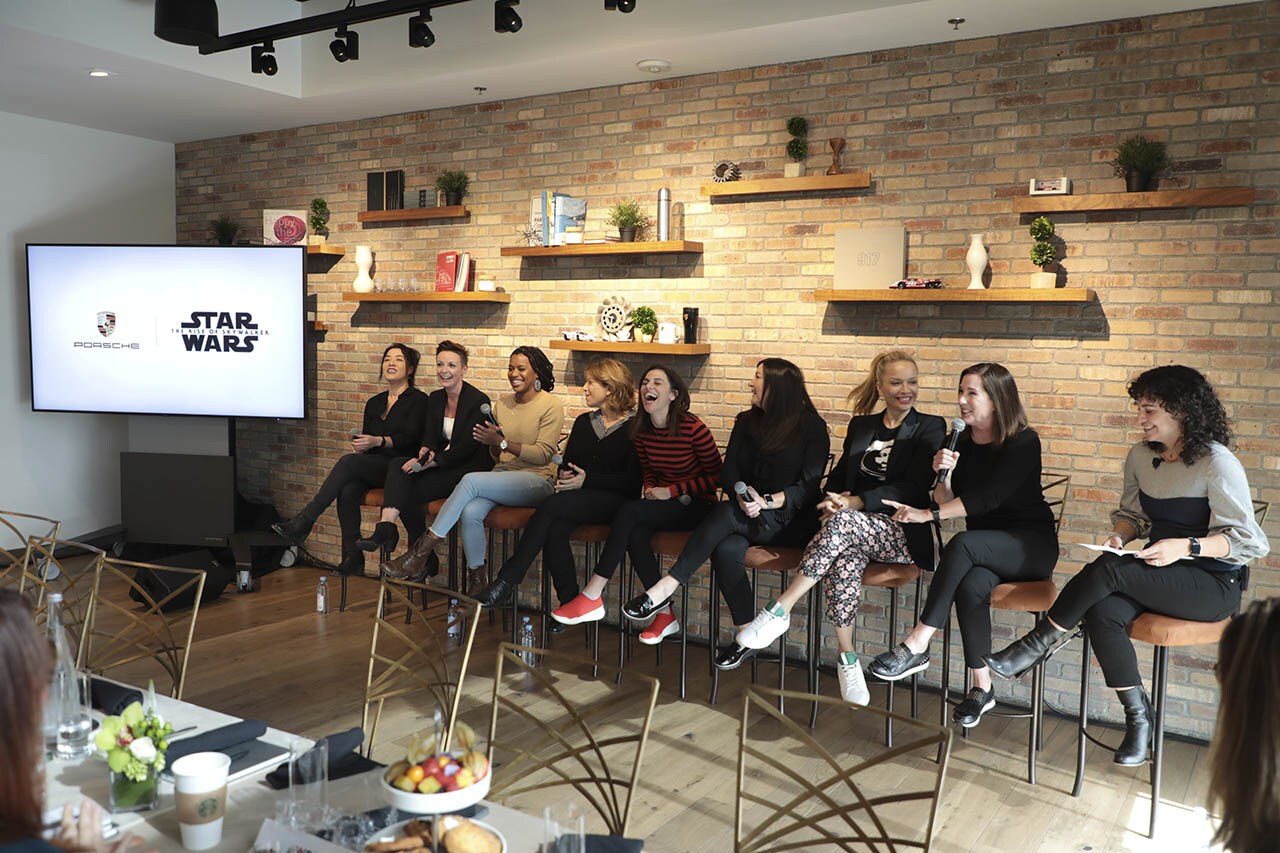 The Millennium Falcon never touched down as she had hoped, but the second unit director for Star Wars: The Rise of Skywalker found a different path into the saga that had enraptured her as a child. Recently, on a panel moderated by The Star Wars Show’s Andi Gutierrez, Mahoney was joined by President of Lucasfilm, Kathleen Kennedy; EVP and General Manager, Lynwen Brennan; SVP of Live Action and Development and Production, Michelle Rejwan; The Rise of Skywalker Editor, Maryann Brandon; Lucasfilm Director of Development, Rayne Roberts; Episodic Director for The Mandalorian and Director of the upcoming untitled Obi-Wan Kenobi series, Deborah Chow; and Skywalker Sound Effects Editor, Bonnie Wild to discuss their inspirations and influences in their own careers, and the evolution of Star Wars storytelling.

For many on the panel, Star Wars was something they loved growing up, and it’s been surreal to step into the larger world as a creative caretaker of the galactic lore. 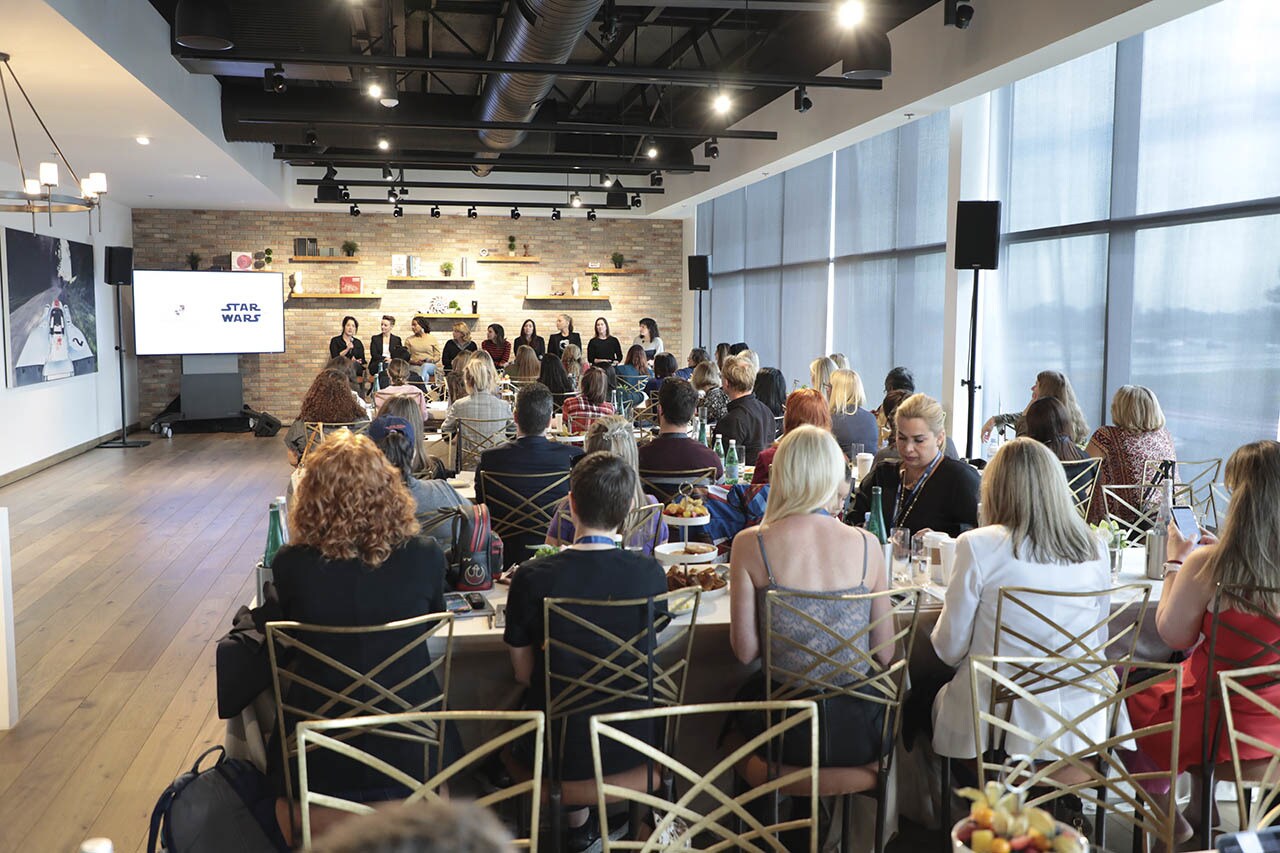 “For us, it’s really interesting to inherit a legacy like George Lucas’s, which so many people love and has so much meaning baked into it from a 40-year history,” Roberts said. “As we develop new stories and develop new characters, it’s important for us to maintain the kind of emotional legacy of what George created, but add more that speaks to the filmmakers’ own interests and experiences and what they want to say inside of Star Wars.” Contemporary voices and new ideas help keep Star Wars fresh and of its time. For example, when Roberts and other creatives first met to solidify the vision for Star Wars: The Force Awakens, Rey was a product of the times and director J. J. Abrams’ storytelling. “Rey, she’s so comfortable being in her power and I feel like she’s a real reflection of where we were at seven years ago,” Roberts said. They asked themselves, “What do we want to see in a new hero? And we wanted to see this woman,” a self-sufficient and scrappy fighter who didn’t need her hand held and was just as capable at the helm of a ship as she was handling a blaster.

But it’s just as important not to stray too far from what makes Star Wars, well, Star Wars. As VP and Creative Executive Director Doug Chiang told Roberts, “George Lucas always said you want to add 20 percent more to what exists. That’s like the sweet spot. For design…and it’s also very helpful for story as well.” 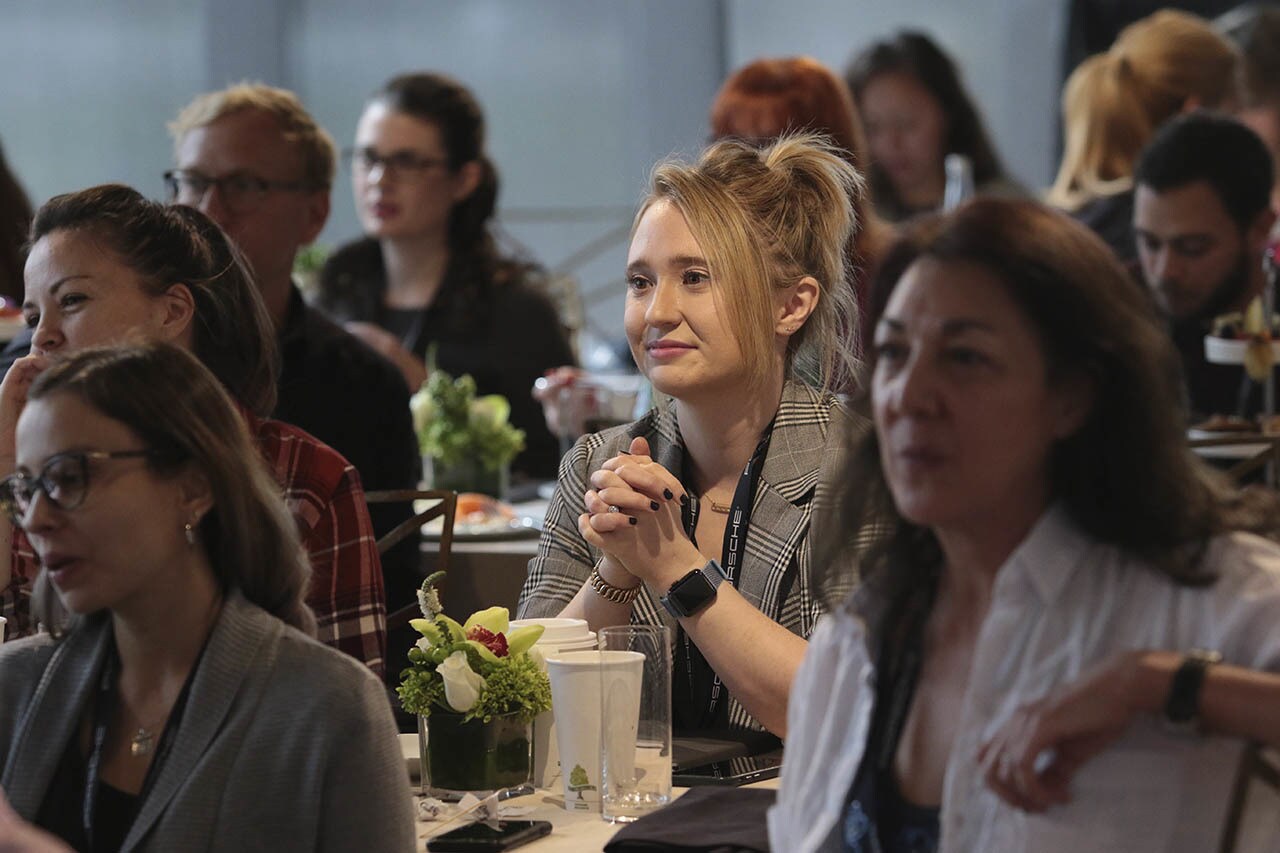 For the audience, new Star Wars stories must resonate in an emotionally impactful way but strike the right balance with the world they know and love. “We talk a lot about ‘How do you want to feel?’ when we’re talking about story…and that can be very abstract,” Kennedy said. Adding 20 percent, “I think that feels about right. Because if you go too far, you lose the very thing that everybody loves. So it’s finding what that balance is.” For every new Star Wars project, there’s no source material or novel to adapt. “And so our conversations begin in that place often of just people sitting around like you saying, ‘What do you love about Star Wars? What does it make you feel?  What do you want to repeat in that feeling?’ It doesn’t mean you want to repeat the story, but you want to repeat that feeling.”

And maintaining the recognizable visual storytelling is an essential part of the connective tissue of the Star Wars galaxy, a difficult to quantify look and feel that continues to evolve while staying true to its iconic roots. “It’s meant something to the audience. It’s been shared across generations. And I think that authenticity is what fueled the iconography of it,” Kennedy said. “And maintaining a classic design. Ralph McQuarrie is an artist who was very, very instrumental to the look and style of Star Wars and still we reference it in everything we do. With every movie, every television show, every game. Whatever it is, we reference that over and over again.” 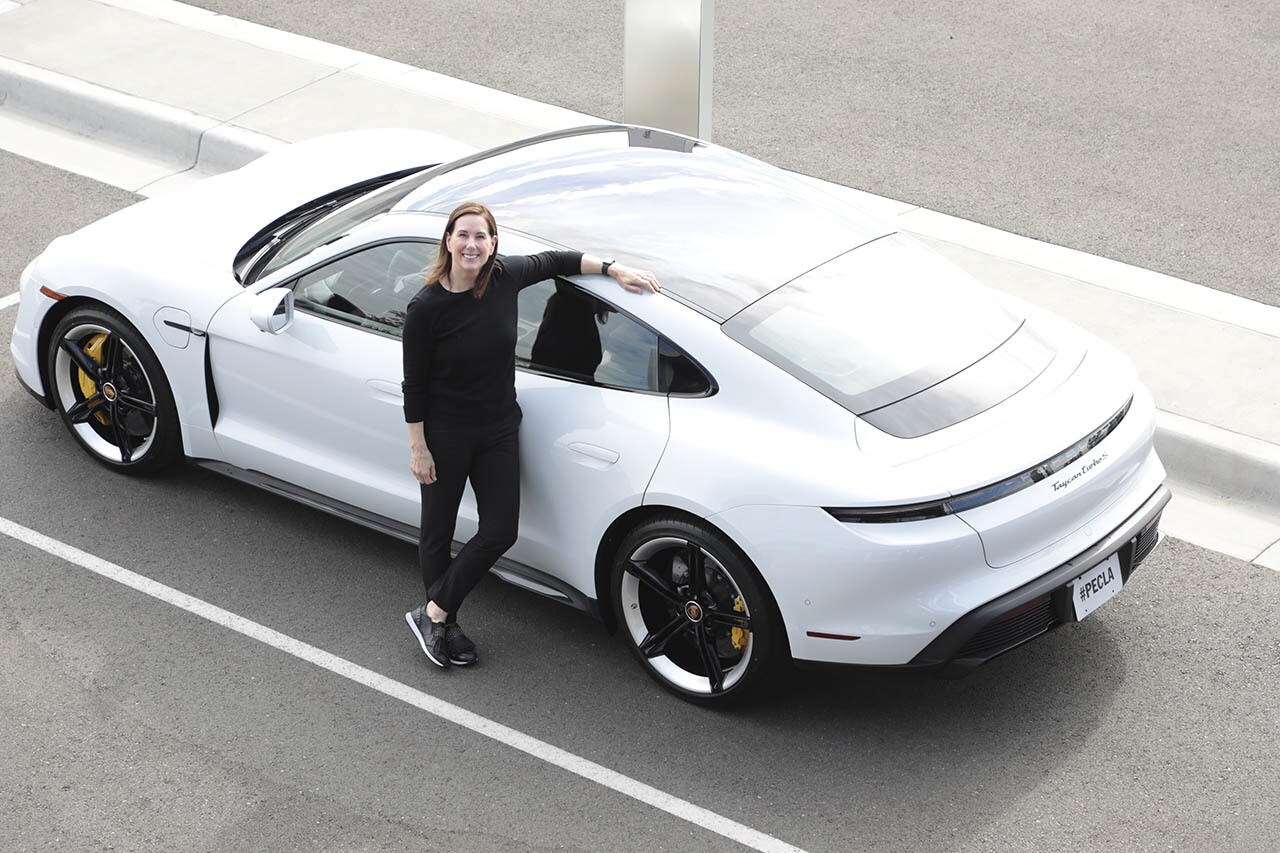 Like a Jedi Master leading the way for a new class of Padawans, many of the panelists named Kennedy herself as a mentor and inspiration. “It always feels like you’re on a cliff’s edge,” Rejwan said of working in production. “It’s Star Wars. It’s quite inspiring because it means so much to so many people, so there’s not one detail that we don’t talk about tirelessly and weigh.”

Brandon and her fellow collaborators on the new film have worked for years to end the Skywalker saga just right. “For two months, we haven’t had a day off or a night off or a morning off or anytime off,” she said. “Just when you think, ‘I don’t have the answer there,’ yes I do. And you shift something around and the film starts to sing, and you get there when you never thought you would, and that is one of the elements that is movie magic.”

“I love being scared, which is probably why I came into visual effects because we’re constantly terrified,” Brennan agreed. “If you’re not terrified, you’re not pushing the envelope.”

And as the Skywalker saga comes to a close, Star Wars will soldier on, breaking new barriers and pushing new boundaries. It already has. LED screens that were used for lighting effects on real actors, sets, and props for Rogue One: A Star Wars Story gave rise to high-end laser projections on Solo: A Star Wars Story. Now, with The Mandalorian, in order to bring Jon Favreau's vision for the series to fruition, ILM and its technology partners collaborated with Favreau to develop Stagecraft technology, projecting high-quality images on screens to transport actors to places only previously accessible by costly and arduous location shoots. “We did a lot of really sort of groundbreaking technology on Mandalorian,” Chow said. “I’m a total genre nerd…so Star Wars was sort of the pinnacle of that actually.” But even with the game-changing technology, another hallmark of the Star Wars legacy, it only worked because it had the foundation of a brilliant screenplay, “something you’re grounded with,” Kennedy said. “And then you can push the technology.”

“Even when you have all the bells and whistles and you have all the technology…at the end of the day, it does always just come back to character and story,” Chow added. “It allows you to tell the story in a really visual way, but you still really need a basic, great story.” 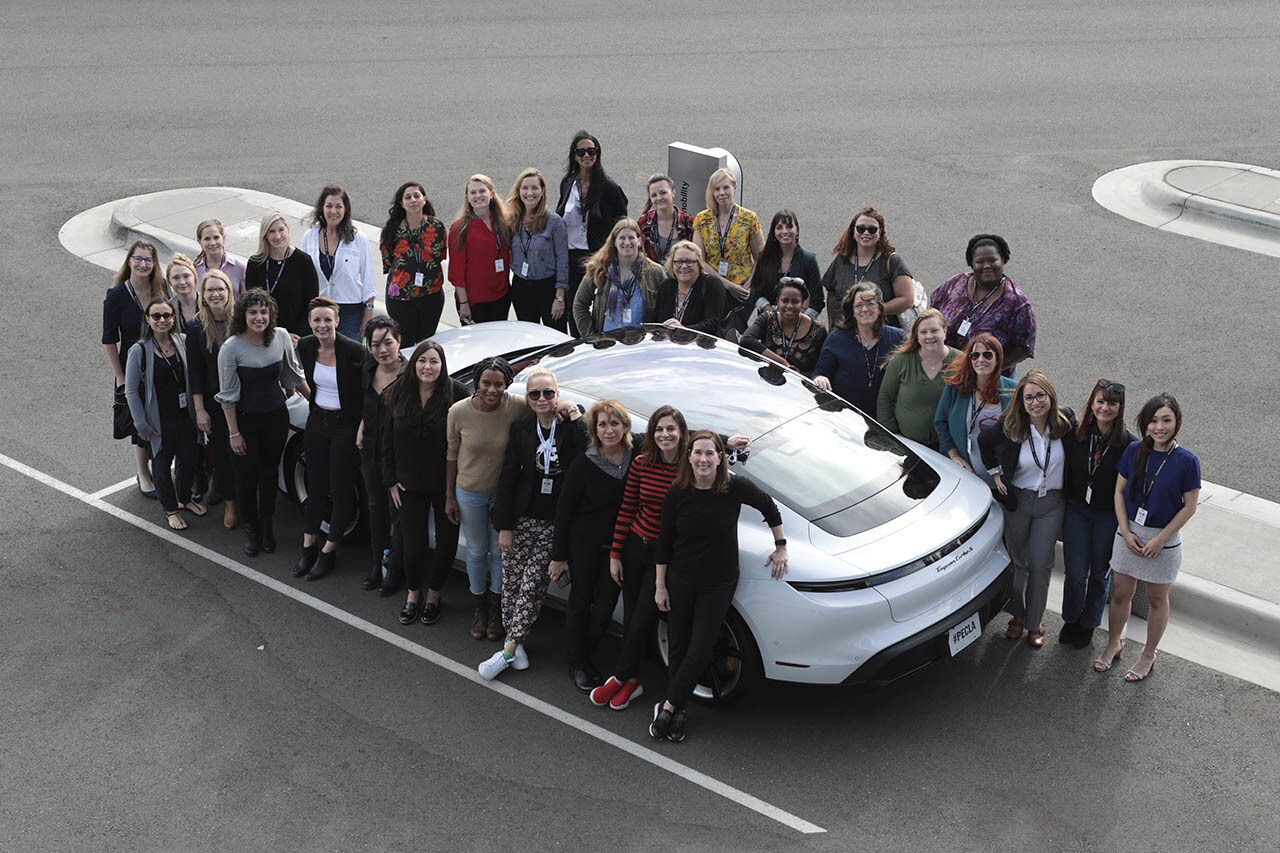 And, of course, it also comes down to putting together a crew of hardworking people, driven by ambition and a love for the Star Wars galaxy. “Two to three years seems like a long time to work on a movie,” Rejwan said. “Having the curiosity and the humility and wisdom to see around you and who makes you better and what makes the project stronger. It really all comes down to people. And if you have surrounded yourself with the right people then truly you can solve any problem.”

Porsche is celebrating the release of Star Wars: The Rise of Skywalker by highlighting the timeless designs and co-designing a new starship that honor their common design philosophies. For more information on the design collaboration visit www.thedesigneralliance.com.

Tickets for Star Wars: The Rise of Skywalker are available now.