In a Snap: Greg Grunberg Talks The Force Awakens (on VHS), Working with Star Wars Icons, and Much More

StarWars.com speaks with Snap Wexley himself about his love of Star Wars and becoming part of the saga in The Force Awakens.

Greg Grunberg is the man behind Temmin "Snap" Wexley -- the best recon flier in the Resistance's Starfighter Corps, who along with Poe Dameron and his fellow X-wing pilots, helped bring down Starkiller Base in the thrilling finale to The Force Awakens.

Greg is not only an actor, but also a producer, a philanthropist, and soon-to-be a graphic novelist with the release of his debut work, Dream Jumper, this June. StarWars.com recently had a quick chat with the man himself about his love of Star Wars, why he's geeking out with Kevin Smith, and what he said to Abrams after witnessing THAT Force Awakens Han Solo moment.

Greg Grunberg: When it all began! I turned 50 this year, so I was 11 in 1977 and my best friend in the world was J.J. Abrams. We were both just so excited to see this whole new world and to discover these new characters. I can totally get how the movie executives would have been like, "What is this garbage?!" But it was sold to us immediately!

And you know they always use a fake name for a production, because they don't want people to know that we're shooting Star Wars, so for The Force Awakens they used AVCO, and it was after the Avco theatre in Westwood, California, where J.J. and I both went to see the original film all those years ago! It's just so amazing that it came full circle like it did.

StarWars.com: It really is! Okay, so who was your favorite character back then?

Greg Grunberg: Han Solo! It was almost like he was begrudgingly going through the movie. It's just a very relatable character; the guy who doesn't want to do things by the book and who kind of just always gets them wrong but gets them right, you know, doing it his way. I just think Harrison Ford as Han Solo is brilliant and I immediately gravitated towards him.

StarWars.com: Now Greg, let’s fast forward to the not-so-distant time of 2013, and you hear the news that your old buddy J.J. Abrams is to direct a new Star Wars film. How long was it until you picked up the phone and begged him for a part -- are we talking seconds or milliseconds?

Greg Grunberg: [Laughs] I didn't know that my autodial worked with my brain! I didn't even have to dial the phone, man! First of all, he was undecided. It was a huge undertaking, so Kathleen Kennedy sealed the deal and when he told me, I was just so excited for him. Seriously! Usually it goes to a selfish place immediately, like “I'VE GOT TO BE IN THIS,” but I just couldn't believe that he was being given the keys to the crowning jewel of all films. It blew me away.

And then, of course, I hung up the phone and I was like, “Wait a minute!” And I called him back and said, "Listen, there's GOT to be something for me!" 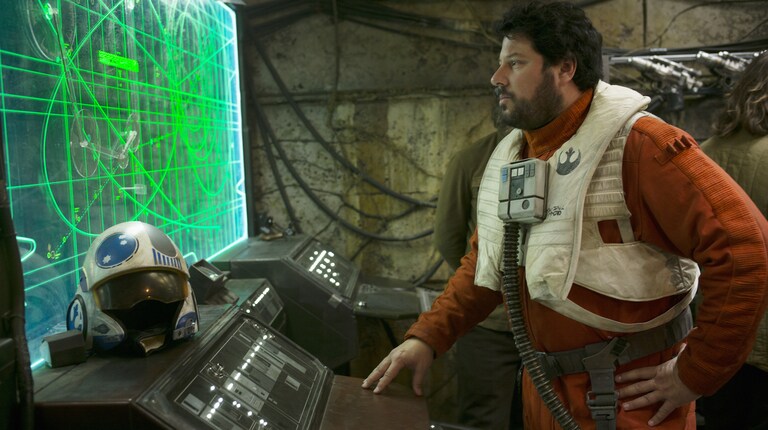 StarWars.com: Was your lifelong friendship on the line depending on his response?

Greg Grunberg: No, there's nothing J.J. could do that would ruin my friendship with him and, I think, vice versa… Trust me, I've tried!

I mean, he had so much on his mind but he never forgot me. For the two of us, the big prize is when we get to hang out and work together. We're so busy with our families and our work individually, so when we get an opportunity to hang out, it's the best. So when he saw an opportunity to create a role for me and know that we're going to be over in London, which is like our favorite city in the world, it was just amazing. I would have gone over anyway just to hang out with him. I really was the luckiest friend and actor in the world to be given the role of Snap Wexley. Which is just the coolest name, by the way.

StarWars.com: You've been acting for years and you're recognizable for a number of roles, but has being in Star Wars changed your life in any way?

Greg Grunberg: Yes. It's amazing. Everybody that recognizes me now, it's for Star Wars. I mean, Heroes, it's been a while and I'll get the obscure Big Ass Spider [mention]. But usually if I walk into a room and I see somebody that recognizes me, then I can think, "Oh, she was a fan of Felicity," or they might have been Alias fans, or, if they're younger, then it's Baby Daddy. But Star Wars doesn't discriminate -- everybody watches Star Wars! So it absolutely has changed my life. I mean, Heroes changed my life in a big way but this goes way beyond it, like a 100 times. And I don't even have a huge role in the movie, so I can't imagine what's happening to the stars.

StarWars.com: Being in Star Wars and being such a big fan from the very beginning, do you actually ever reach a point where it feels real? I mean, you see yourself in comic books and in action figure form, do you ever fear that it all might be a big elaborate prank?

Greg Grunberg: Yeah, it's weird, I've had films available on planes before that I've done, but I was recently flying back to L.A. from London and they're showing Star Wars, and I actually tweeted about this because they were showing a VHS copy of The Force Awakens! 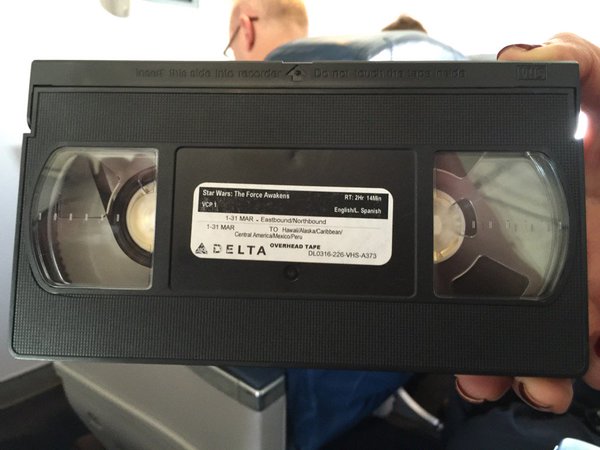 Greg Grunberg: Yes! . . . But I couldn't believe it, so I text J.J. a picture of it and said, "Do you judge an airline by the technology they use? And if not, maybe you should." But anyway, I have a picture on my Twitter stream and it’s with my face on the screens in the background as Snap Wexley! And that's when it really hit me that, wow, this is real. And again, I'm not a star of the movie, but to get an action figure, a Pop! toy, to be in the comic book series, it's just so cool. StarWars.com: You mentioned Big Ass Spider. If there was a sequel, then what Star Wars monster or alien would you pick to be the antagonist?

Greg Grunberg: Oh, it has to be the rancor, absolutely!

StarWars.com: That would be an epic battle! Imagine if it was Greedo, then it would be like the shortest film ever! Or maybe if he was the protagonist it'd be the longest. He'd just keep missing.

StarWars.com: Right, so you've basically been giving the same answer since 1977. You're consistent at least!

Greg Grunberg: You can't teach an old dog new tricks! I just think it was the best performance that Harrison Ford has given in any Star Wars. I turned to J.J. when I first saw THAT moment happen, and I said, "Man, you are not [messing] around," and he smiled, but I did not smile. I was so bummed!

StarWars.com: So you didn't know at all that it was going to happen?

Greg Grunberg: We didn't get the scripts. I would ask him all the time how it was going and he was always very secretive, he's all about secrets, but he would say, "Oh, there's some really cool moments," but that was it. We usually share a lot of ideas and secrets, but this one was totally top secret.

StarWars.com: You've talked before about how excited you were to be around classic characters such as C-3PO, R2-D2, and Chewie, but who did you most enjoy working with on set? Was there anyone in particular who surprised you?

Greg Grunberg: The ones that you hear the most lore or the most stories about are usually the ones that are so awesome, and just immediately break all the walls between you and them, and here that was Carrie Fisher. She is the greatest, she's the most fun, and there's just no pretense. But Harrison Ford is the most professional actor I've worked with.

StarWars.com: Now Greg, incase you didn't know, as well as being an actor you're also a producer, a writer, an X-Wing pilot, a dad, a philanthropist, a police officer who reads minds, and if that's not enough, you're now a graphic novelist. I thought that us human men aren't supposed to be able to multi-task but clearly you're the exception to that rule! So tell me about your debut graphic novel Dream Jumper.

Greg Grunberg: Dream Jumper came about because my son Ben had a dream, and I heard him wake up so distraught. So I went to his room and was trying to help him and put him back to sleep. I said, "Ben what is it, why was it so scary?" And he said, "It was just so vivid, I was able to jump in and out of my friends’ dreams and save them from their worst nightmares. I was like a superhero." And it hit me so hard, I was like, "Don't go back to sleep, daddy's going to go and get his laptop!"

Greg Grunberg: So out of his nightmare came the idea for Dream Jumper. It's a way to get into the dream world. It's very dark and funny at times, and there's a lot of wishfulness 'cause that’s what happens in our dreams -- we pretend we can fly and save people. This character Ben realizes he's got this gift for a reason, and that he's part of a lineage of people who have had it before him. It all hit me so powerfully, so, of course, I called my friend J.J. and I said, “I've got a great idea for a TV show or a movie,” and he thought it was phenomenal, but said it was a book. So I wrote the book, and partnered with Lucas Turnbloom, who is an award-winning cartoonist and illustrator, and Scholastic are putting it out through their graphics division. So it's going to be in every school and book fair around the world. It's already on Amazon preorder but comes out June 27, right around J.J.'s birthday, which is both ironic and wonderful.

StarWars.com: Well, we all know what you'll be getting him for his birthday then!

Greg Grunberg: Yep. I'm getting him a case of books.

Greg Grunberg: Yes, we're doing Geeking Out on AMC, we've partnered with the Weinstein Company. It's us totally geeking out on the things we love on a peer-to-peer basis. We'll be using our friends, who are makers of the things that we all know and love, and watch a million times over. Yes, I was in Star Wars, but I'm just as much a fan as anyone else. Oh, and I should mention LEGO Star Wars; I voiced my character Snap Wexley for it! That's coming out at the end of June.

Greg Grunberg is the chairman of the Talk About It! foundation which helps raise awareness on epilepsy and seizures.