Happy Rancor: The Charming Wit and Wisdom of Luke Skywalker and the Treasure of the Dragonsnakes

Revisiting a powerful comic book about Luke's training with Yoda on Dagobah.

Happy Rancor explores hidden gems in and around the orbit of Star Wars — from old video games to comics to underrated novels — that have maybe been forgotten, but deserve a little more consideration. In this installment, we take a look at a comic book featuring a lost tale of a Jedi-to-be learning from one of the greatest Masters ever.

There's a distinct difference between the Yoda we meet in The Empire Strikes Back and the Yoda of the prequels, particularly The Phantom Menace and Attack of the Clones. Prequel Yoda isn't quite as warm. He takes things more seriously. He takes himself more seriously.

This is by design. When I interviewed Dave Filoni about Star Wars: The Clone Wars and the Yoda arc from The Lost Missions, he explained that the Yoda of the prequels hadn't yet achieved a greater understanding of himself, of what it really means to be a Jedi, and had not yet been humbled by the Clone Wars. It's his experience in the Clone Wars and the trials he goes on in The Lost Missions that start to change who he is, and leads him to become the Yoda we originally knew. The one who is wise but compassionate, the one who can playfully mock Luke ("Aw, cannot get your ship out?") one minute and then teach him profound life lessons the next, the one who accepts his death with grace. 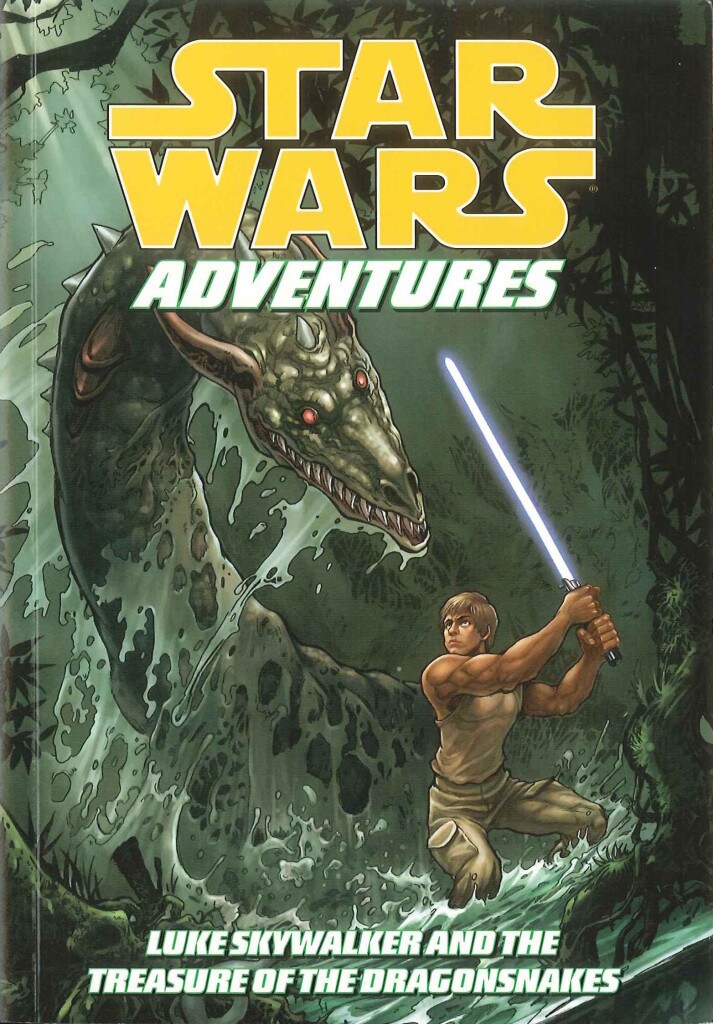 Luke Skywalker and the Treasure of the Dragonsnakes is a short graphic novel written by Tom Taylor and illustrated by Daxiong, set during Luke's training with Yoda. It centers around that training as well as the king of the dragonsnakes -- the creature that gobbles up Artoo when Luke crashes his X-wing in Empire -- who rules the swamp. All of the other dragonsnakes live in fear of this monster, who is determined to destroy anything that challenges him. Finally, Yoda sends Luke on a quest to retrieve an object from the king's lair. It's a mission that tests Luke's will, courage, and faith in the Force.

I love this book. While it's not canon, the story is so well written and told that I find it an essential companion piece to The Empire Strikes Back. It's also essential Yoda; a book that accounts for Yoda's entire story -- both in the prequels and the original trilogy. It works as both smart fable (the young knight must travel into the dragon's lair for treasure, a tale that's been told across cultures for generations, but with a Star Wars twist) and as an exciting, thoughtful Star Wars story. It has a sense of danger and it has a sense of mystery, just like the Dagobah sequences in Empire. It has lessons about the Force and about life. It has sadness and it has positivity.

But it's Taylor's wonderful Yoda that impresses me the most. He captures Yoda's voice in an authentic way that never feels like imitation, and it's a joy from beginning to end. This is Yoda as we first knew him: playful, hopeful, wise. 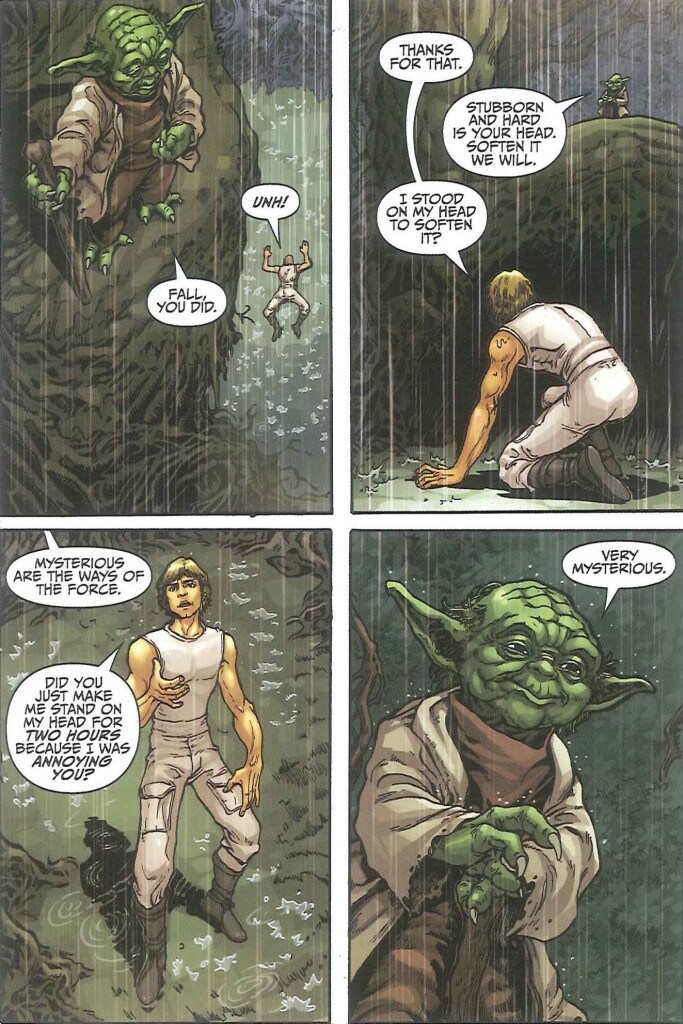 This is a fun and warm scene, but it also pays off later. When Yoda sends Luke on his journey to seek out the king of the dragonsnakes, the young Jedi takes his lumps and has to exercise patience. Like all of Yoda's best lessons, it's something we can all learn from.

The book is filled with great moments between Master and apprentice. There are more serious bits of training, including a terrific sequence where Yoda duels Luke with just his walking stick. But the quiet moments are equally powerful. 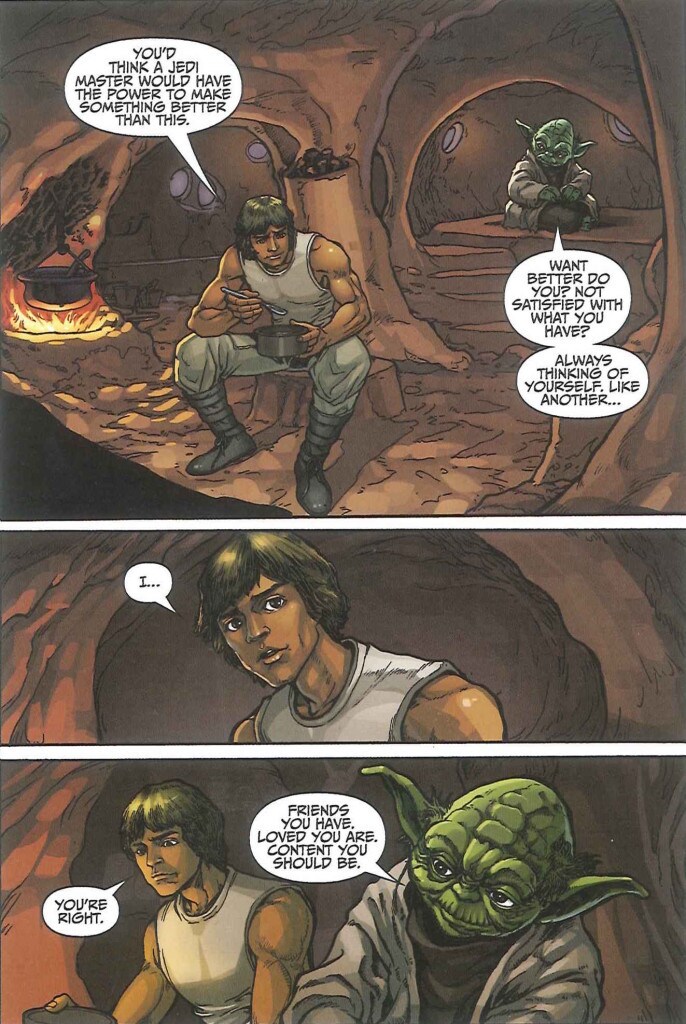 Luke complains, as he did at that time. Yoda instantly focuses him as to what's truly important. I find this scene to be really beautiful in its quietness and honesty. Another great life lesson, but it also hints at Yoda's past, and how he came to this understanding. Yoda had friends once, too. Now they're gone.

We get all of that in three panels.

In another creative stroke, Taylor further acknowledges Yoda's history. There's that one scene in Empire while Luke is in the cave, and Yoda and Artoo wait for him. They give each other a knowing look. It's strengthened by the prequels, and deepened here. 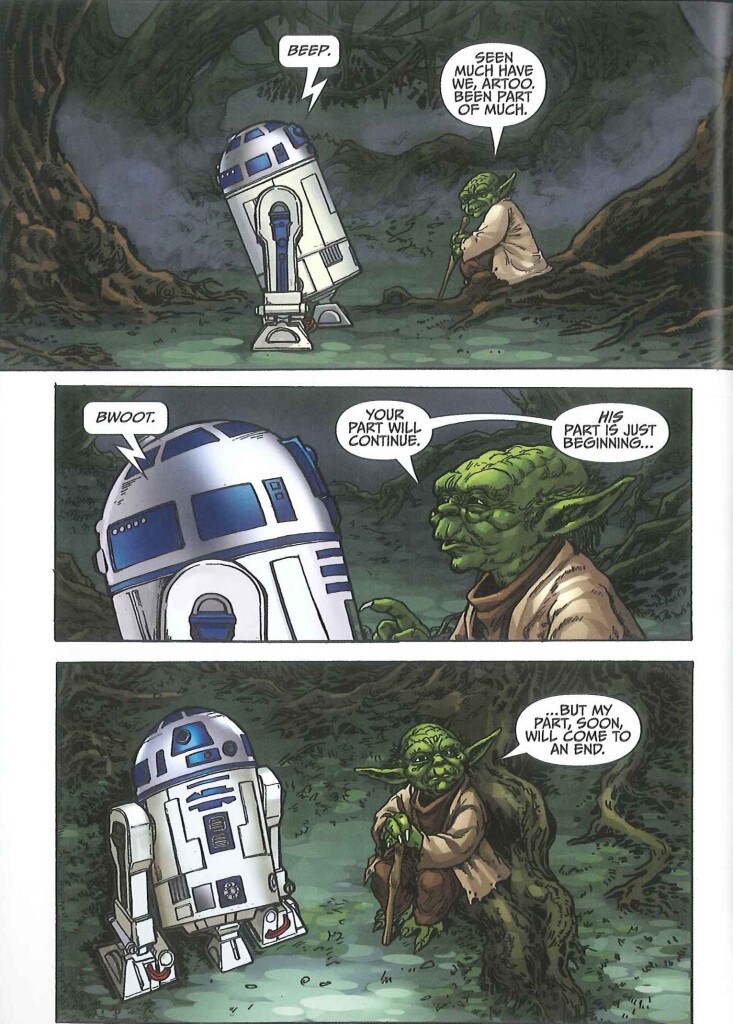 This one page encapsulates the past, the present, and the future. It's calm, it's accepting, it's hopeful. It's Yoda. And is this how Yoda and Artoo interacted when Luke was off training on his own? I think it was.

I won't ruin what happens in the king's lair, and whether Luke finds the object Yoda wants. Luke Skywalker and the Treasure of the Dragonsnakes is a rewarding journey for readers of all ages, a beautiful take on Yoda -- and a charming trip back to a moment in time on Dagobah.