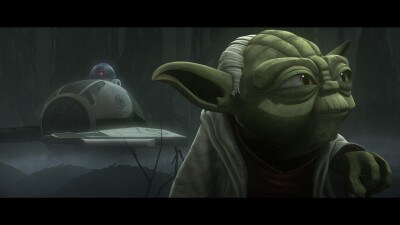 Back when I interviewed Dave Filoni about Star Wars: The Clone Wars, we spoke for a long time regarding the series' themes, its final broadcast season, and its legacy. I included almost everything we discussed in the final three-part piece...except for one brief exchange that had to remain on the cutting room floor: our talk about the Lost Missions' Yoda arc, which at the time, was a little too spoilery to publish. Now that the episodes are out on Netflix for everyone to enjoy, I'm really happy to share his thoughts on this essential story.

StarWars.com: Of all the characters, George Lucas seems to be very protective of Yoda, especially putting him out there alone. Can you talk about how this story came to be, and what it was like working with George on the Yoda arc?

Dave Filoni: We tried to do a story with Yoda almost every year, but it didn’t happen. Yoda is such an important character that we would be evolving the story and go, “You know, Yoda being in this, it just doesn’t make sense. It’s not a big enough obstacle for him. If he’s there, I don’t believe this is as much of a problem.” So that’s why he’s relegated to the Council a lot, unfortunately.

We finally landed on this big story, which in some ways is connected to the Mortis trilogy that we did. It’s kind of the other side of that coin, where Yoda gets directly involved in the bigger questions about the Force. George and I would discuss this story all the time, because it’s Yoda, and it’s very important to him, and I wanted to make sure we got it right. So I was always asking George things about Yoda, how he would behave, what he would do and what he would question.

What you get out of this story arc is that you understand, finally, that Yoda in the Clone Wars period is not at all the same person that he is in The Empire Strikes Back. People, I think, have always wondered, "Why [in The Clone Wars] isn't he like he was in Empire? He's not as odd, and he's not as quizzical. Why is he so much more serious in the Clone War and where's the fun little Yoda who was wise?" Well, he's not there yet, you see. The story that we tell goes a very long way toward explaining who Yoda is prior to the Clone War and who he becomes after the Clone War.

He basically reaches a certain point of enlightenment and it ties into Qui-Gon and what Yoda talks about in Revenge of the Sith. It makes all those things come together. And then when you look at it, and you hear what he says at the end of this arc versus what he was saying at the beginning, you realize he's come to a different understanding. In Empire he says things like, "Wars not make one great." Well, he fought a war. You have to fight through the war, and you have to get through that, and see other people that do that, to have any understanding of that truth. So he can't be that way [during The Clone Wars]. "A Jedi uses the Force for knowledge and defense. Never attack." Well, the Clone Wars-era Jedi don't seem to think that way. Maybe that was a long-lost governing principle, but they're certainly not behaving that way in the Clone War. So you understand that, fundamentally, what a Jedi is during the Clone Wars and the prequel era is different than what Yoda, Qui-Gon, and eventually, Obi-Wan, understand is the truth of being completely selfless. Certain things in life you cannot defeat through conflict. You can only defeat them through being selfless and giving of yourself for others. Inspiration, enlightenment, teaching. I mean, that's all in The Empire Strikes Back.

They never tell Luke to actively go out and save his father. In fact, they say he's probably going to have to destroy his father. But it's mainly because they can't tell him that which he needs to understand -- the true enlightenment of "I have to save my father." They can't just say it. That makes it easy. Faith isn't about knowing.

StarWars.com: And how would you have a road map of how to do that?

Dave Filoni: Yeah. It's not about seeing. It's about believing.

That's all in the Yoda arc. It's a very, very big one, as far as what the Force is all about. And I think that we were very lucky to have George answer our questions before he was gone. But he’s not gone entirely! He's more like a Force spirit that I can communicate with from time to time! [Laughs]

The Clone Wars Rewatch: The War Ends in "Victory and Death"

Celebrate St. Patrick’s Day and Beyond with the Star Wars Green Gift Guide