With Luke Skywalker and Wedge Antilles battling it out last week in This Is Madness: The Star Wars Character Tournament, I was reminded of Star Wars: Rogue Squadron II -- Rogue Leader, a video game that stars them both.

I couldn't believe early images of Rogue Leader. It was one of the few third party titles developed for the September 2001 launch of the Nintendo GameCube, and previews began popping up in gaming magazines and online well in advance of the system's release. Exclusive Star Wars games on Nintendo systems had become something of a tradition at that point: Star Wars and The Empire Strikes Back on NES, the Super Star Wars trilogy on Super Nintendo, and Shadows of the Empire, Star Wars: Episode I -- Racer, and the first Rogue Squadron on Nintendo 64. I loved them all, but the advance screenshots from Rogue Leader looked more detailed than any previous Star Wars game. It was clear that there was something special about Rogue Leader -- and when it finally came out, it actually lived up to expectations, garnering critical acclaim and becoming a hit with fans. Years later, it's still a dazzling Star Wars experience. 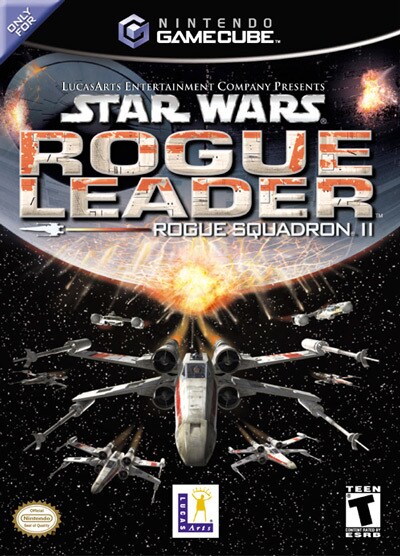 Rogue Leader is an arcade-style shooter, sequel to the aforementioned Rogue Squadron (a great game itself, notable for featuring full voice acting, a rarity on a cartridge, and for being one of the first games to make use of the Nintendo 64's Expansion Pak, which boosted the game's resolution to 640 x 480). In Rogue Leader, players control either Luke or Wedge and journey through the original Star Wars trilogy, piloting several classic ships: the X-wing, A-wing, Y-wing, B-wing, snowspeeder, along with several unlockable craft (more on that later).

Rogue Leader's opening level is the Death Star attack from A New Hope, and it's astonishing. Players control Luke, piloting his X-wing in a surface battle, where you have to destroy deflection towers while gunning down TIEs, and finally, make the iconic trench run and destroy the Empire's "technological terror." It's a brilliant way to open a Star Wars game. For the most part, Death Star levels were always the climax of Star Wars shooters, the big payoff after hours of gameplay. Using such a huge, historic battle to open Rogue Leader flipped that dynamic on its head and raised the stakes for the game immediately, throwing the player right into a key moment of the saga. While revisiting the level for this piece, I was amazed at how well it holds up. You can give your wingmen (limited) orders on a plan of attack; the in-game radar is easy to read and adds a level of strategy to the game; and it captures the feeling of the original scene, from pacing to lighting to sound cues. It all still looks great -- which is more than can be said for most titles from that time period -- from the detail on the Death Star to the first-person cockpit view, which is probably the closest any developer has come to making you feel like you're actually in an X-wing. Overall, it may be the best game adaptation of the Death Star attack ever made. Rogue Leader ends with the attack on the Death Star II from Return of the Jedi. The danger here would have been for this level to be a repeat of the opening level, but in an example of smart game design, they're actually completely different experiences. In this final level, when Admiral Ackbar says his classic line, "It's a trap," you swing your ship around and face an armada of Star Destroyers and countless TIEs. The number of TIE fighters, Bombers, and Interceptors buzzing around is incredible; they're everywhere, and it's much more intense than the opening Death Star level, which was really on a much smaller scale. Here, the half-completed Death Star looms in the background, Endor is below, and giant warships battle around you. After surviving the initial swarm of TIEs, players engage with Star Destroyers, then move onto the surface of the Death Star and follow the Millennium Falcon inside to destroy the main reactor. It's a wonderful bookend to the opening level, and it feels like Return of the Jedi and nothing else. Return of the Jedi often gets criticized for duplicating the finale of A New Hope, but Rogue Leader proves how they're actually very different, from scope to speed. Amazing work.

Throughout the main campaign, Rogue Leader takes players through a mix of missions not in the movies, from escorting Rebel convoys to dogfighting in asteroid fields to rescue operations. Much like the Star Wars films themselves, these levels all feature different settings and terrain and climates -- it's a subtle nod that honors an aesthetic tradition of the saga, but also just makes it more interesting for fans. A particular favorite is "Vengeance on Kothlis," in which players engage with Imperial fighters above the shores of a tropical world, while a team of Rebels raids a downed Star Destroyer. There wasn't really anything like that in the films up until that point, and playing it again now, it still feels new. And the sight of the crashed Star Destroyer is still pretty jaw-dropping. 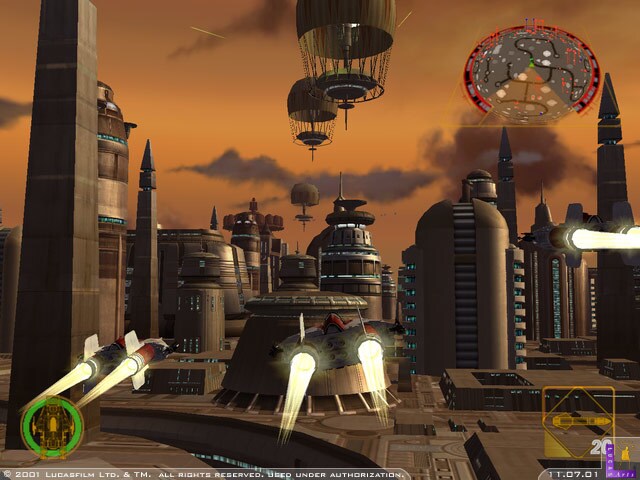 The game's third level, the Battle of Hoth from The Empire Strikes Back, is one of its landmark stages. It might not seem like it now, but Hoth levels had become an almost tired trope in Star Wars games by 2001; Super Empire Strikes Back, Shadows of the Empire, Rebel Assault, and Rogue Squadron all featured Hoth levels, but were often hampered by technology constraints. In Super Empire Strikes Back, the walkers didn't walk. In Rebel Assault, you shot them down as opposed to tying up their legs. But Rogue Leader truly got it right and warranted a return trip to the ice planet. Snowtroopers are on the ground, probe droids buzz in the distance, and AT-STs and AT-ATs march toward the Rebel base. Much like the film, the drama comes from the fact that the AT-ATs are imposing, towering weapons of destruction, and it's amplified by the stark, snowy white background -- there's nowhere to hide, and there's something maybe more isolating about a snowy nothingness over the vastness of space. Using harpoons and tow cables to down AT-ATs is immensely satisfying, and the controls and camera angles used to do this are seamless transitions from normal piloting. The level follows the movie perfectly, right down to Dak dying and Luke crash landing, but the nice spin here is that players control Wedge, not Luke -- you engage with more AT-ATs, protect Rebel transports from TIE bombers, and continue the mission by escorting the transports into space. It's a faithful recreation of the famous scene, but also an extension in a way not that's really possible in any other medium. 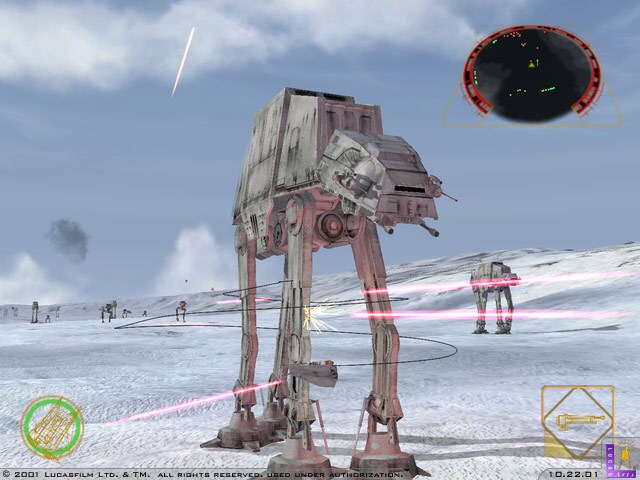 Aside from level design and overall creativity, there's also just lots of plain fun stuff in Rogue Leader that the developers did not have to include but thankfully did. The hidden extras -- unlocked through performance goals or passwords for the lazy (like me) -- are a treasure trove for fans. Bonus ships include the Millennium Falcon, the Naboo Starfighter, Darth Vader's TIE Advanced, an Imperial Shuttle, Boba Fett's Slave I, and, yes, a car. The extra levels are a real surprise. In "Triumph of the Empire," players control Darth Vader, fighting for the Empire in the original Death Star attack and blasting away X-wings. And it's a real level -- there's voice acting for Vader and the Imperials, the TIE Advanced controls uniquely from all the other ships, and there are new in-game cutscenes. From a game perspective it's a great added value. But the idea of fighting for the Empire after hours of trying to free the galaxy from them is a really clever reversal. 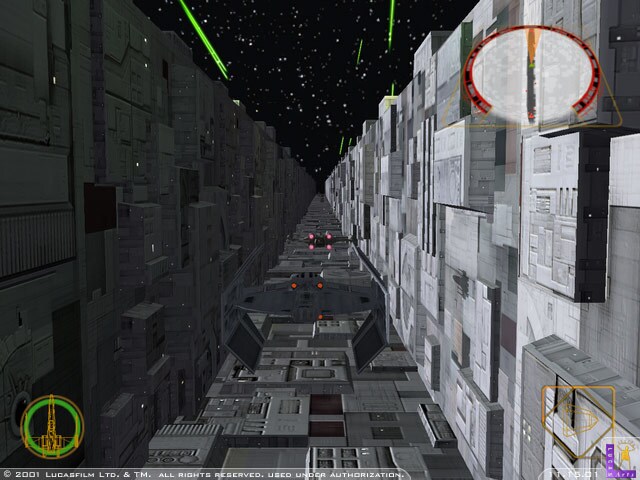 The shelf life of a video game is a strange thing. We get so excited about game releases, read the reviews, play them for hours, talk about them with friends, and then after we beat them, games get sold or put away in a box. Part of that is the nature of the art form; a new game comes out with an innovative control scheme or graphical effects, and it's hard to go back to even the most beloved titles, which become dated as a result. But dust off Rogue Leader. It's a wonderful love letter to classic Star Wars and a great video game, period.

Availability: Currently out of print. Playable on GameCube and Wii.

Dan Brooks is Lucasfilm's online copywriter and editor. He spends his days writing stuff for and around StarWars.com, and making sure "Millennium Falcon" is always in italics. He loves Star Wars, ELO, and the New York Rangers. Follow him on Twitter @dan_brooks where he rants about all these things.