Happy Rancor explores hidden gems in and around the orbit of Star Wars. In this installment, we look at Matthew Stover's adaptation of Revenge of the Sith.

Happy Rancor explores hidden gems in and around the orbit of Star Wars -- from old video games to comics to underrated novels -- that have maybe been forgotten, but deserve a little more consideration. In this installment, we look at the book adaptation of the last (for now) Star Wars film.

Star Wars novelizations are almost a genre unto themselves. They offer fans a slightly alternate, and often times, deeper look into the Star Wars films with extra dialogue and scenes that expand the scope of what's in the finished film. At the same time, they have their work cut out for them: they're competing with the film on which they're based as well as original Star Wars novels, which can make it difficult for readers to know exactly how to view them. Among all the Star Wars novelizations, Matthew Stover's adaptation of Revenge of the Sith is a particular favorite. It delves into characters and their motivations more than one would expect, it's beautifully written, and it enriches the experience of watching the movie in surprising ways.

The film Revenge of the Sith is successful on many levels: it both wraps the prequel trilogy up and segues into the classic trilogy in fine fashion, it has genuine thrills, it raises the emotional stakes of the prequels and adds some more mystery to Star Wars. I still remember the sick feeling I had in my stomach when Anakin chops off Mace Windu's arm to save Palpatine, being mesmerized by the comic-book-like opening rescue of the Chancellor, and a finale that had the momentum of a runaway train. But then, what makes the novelization so successful, especially for someone who is satisfied by the big screen version?

Stover is an artful, exceptional writer, through and through. He captures the spiritual and mystical sides of Star Wars effortlessly, even in the action scenes. His description of Jedi is particularly beautiful -- note this scene from Revenge of the Sith's opening setpiece, in which Anakin, Palpatine, and Obi-Wan are captured on the Invisible Hand and taken to the bridge, where General Grievous awaits.

This is Obi-Wan Kenobi in the light:

As he is prodded onto the bridge along with Anakin and Chancellor Palpatine, he has no need to look around to see the banks of control consoles tended by terrified Neimoidians. He doesn't have to turn his head to count the droidekas and super battle droids, or to gauge the positions of the brutal droid bodyguards. He doesn't bother to raise his eyes to meet the cold yellow stare fixed on him through a skull-mask of armorplast.

He doesn't even need to reach into the Force.

He has already let the Force reach into him.

The Force flows over him and around him as though he has stepped into a crystal-pure waterfall lost in the green coils of a forgotten rain forest; when he opens himself to that sparkling stream it flows into him and through him and out again without the slightest interference from his conscious will. The part of him that calls itself Obi-Wan Kenobi is no more than a ripple, an eddy in the pool into which he endlessly pours.

There are other parts of him here, as well; there is nothing here that is not a part of him, from the scuff mark on R2-D2's dome to the tattered hem of Palpatine's robe, from the spidering crack in one transparisteel panel of the curving view wall above to the great starships that still battle beyond it.

Because this is all part of the Force.


By just describing the act of Obi-Wan walking onto the bridge, Stover is able to convey the magic of the Force, how attuned Kenobi is to it, and the gentleness of his soul. (The "This is [character name]" technique is used to great effect throughout, for everyone from Mace Windu to Padmé.) This is powerful stuff and not conveyed on screen in this scene. 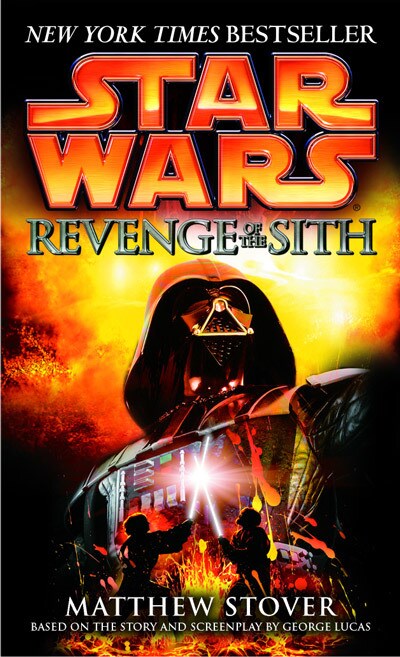 During the lightsaber duel between Anakin and Count Dooku, Stover's style seems to change as Anakin takes control -- and begins to tap into his aggressive feelings. Sentences are shorter, punchier. They're almost more arrogant. It matches what's happening on page, but at the same time, clearly conveys what's happening inside Anakin: he is going to a place he should not.

A starburst of clarity blossoms within Anakin Skywalker's mind, when he says to himself Oh. I get it, now and discovers that the fear within his heart can be a weapon, too.

It is that simple, and that complex.

And it is final.

Dooku is dead already. The rest is mere detail.

The play is still on; the comedy of lightsabers flashes and snaps and hisses. Dooku & Skywalker, a one-time-only command performance, for an audience of one. Jedi and Sith and Sith and Jedi, spinning, whirling, crashing together, slashing and chopping, parrying, binding, slipping and whipping and ripping the air around them with snarls of power.

And all for nothing, because a nuclear flame has consumed Anakin Skywalker's Jedi restraint, and fear becomes fury without effort, and fury is a blade that makes his lightsaber into a toy.


I love how this calls back to Yoda's Episode I warning, "Fear leads to anger, anger leads to hate, hate leads to suffering," while at the same time, "starburst of clarity" foreshadows what Palpatine later tells Anakin about his anger: "It gives you focus. Makes you stronger." Opposite ends of the Force spectrum, illustrated perfectly.

In other places, Stover takes the film and magnifies it. Some felt that the movie could have done a better job at explaining why Anakin would so quickly make a choice to become a Sith. In the novelization, Anakin's confusion and temptation are brought front and center, expanded upon and teased throughout. The Jedi are his family and pulling him one direction; his father figure, Palpatine, though, seems to listen to him where they do not, and is quick to undercut them. Additionally, Palpatine doesn't just offer to teach Anakin dark side powers that could save his wife, but he punctures the core of the Jedi ways, and subtly lures Anakin with material and political power, as well. Note this conversation, led by Palpatine:

Anakin squinted up at him. "I don't understand."

"Of course you don't." The last of the sunset haloed his ice-white hair and threw his face into shadow. "You've been trained to never think about that. The Jedi never ask what you want. They simply tell you what you're supposed to want. They never give you a choice at all. That's why they take their students -- their victims -- at an age so young that choice is meaningless...I ask you again: what do you want?"

"I am offering you...anything," Palpatine said. "Ask, and it is yours. A glass of water? It's yours. A bag full of Corusca gems? Yours. Look out the window behind me, Anakin. Pick something, and it's yours."


Anakin entertains Palpatine's question, which escalates from the Chancellor agreeing to give Anakin anything from a speeder up to an entire planet. The greed Anakin shows during the climax of the film was birthed here.

The book is filled with other great details of the Revenge of the Sith story: the Jedi had tracked Darth Sidious to a Coruscant tunnel leading to residences for the galaxy's wealthiest beings -- including the Chancellor -- making Mace Windu especially distrusting of Palpatine and his influence on Anakin; the reasons Count Dooku had really turned Sith and what he hoped to achieve with Darth Sidious; and insight into Anakin's mindset and feelings after his duel with Obi-Wan. For fans of the world of Star Wars, there's lots here to enjoy.

The fall of Anakin Skywalker is an endlessly compelling story -- it's the backbone of Star Wars, after all. Revenge of the Sith by Matthew Stover is a completely satisfying take on the film, and it's an enthralling read. If you loved Revenge of the Sith or if you wanted to explore its characters and worlds just a little more, you won't be disappointed.

Availability: Hardcover, paperback, audiobook, and e-book. Is also included in the Dark Lord Trilogy collection, along with Labyrinth of Evil and Dark Lord: The Rise of Darth Vader.

Dan Brooks is Lucasfilm's online copywriter and editor, spending his days writing stuff for and around StarWars.com. He loves Star Wars, his PS3, ELO, and the New York Rangers. Follow him on Twitter @dan_brooks where he rants about all these things.