Welcome to the first installment of Happy Rancor, my new column here on the Star Wars Blog. My goal with Happy Rancor is to explore some hidden gems in and around the orbit of Star Wars -- from innovative levels of old video games to underrated novels -- that have maybe been forgotten, but deserve a little more consideration. Today, I'm going to take a look at the manga adaptation of Return of the Jedi, a beautiful interpretation of the classic film, and one of my favorite Star Wars comics. 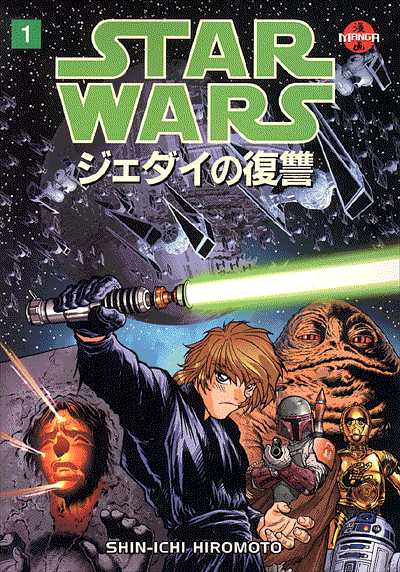 With the recent release of Dark Horse Comics' Star Wars #1, writer Brian Wood achieved a critical and commercial success by drilling down to the basics. Setting his series right after A New Hope, he makes it safe for people to jump on board who only know the original films; at the same time, you're seeing a new take on the classic characters of Star Wars, making it exciting and fresh. This holds true for Star Wars: Return of the Jedi -- Manga, even though it's not a new story.

Star Wars: Return of the Jedi -- Manga, a four-volume series originally released in Japan, then localized and published in the United States by Dark Horse, expertly walks the adaptation-line between literal translation and artistic reinterpretation. For starters, all the dialogue is taken directly from the screenplay by Lawrence Kasdan and George Lucas. There is little alteration of the original lines or scenes, and if you've seen the film many times, you can essentially predict what's coming. There is no added narration, which may be jarring for those used to reading traditional comic books: you get the words the characters speak and nothing else. But this also makes for an intuitive read -- you're seeing the characters you know, reciting the dialogue you know -- and a successful tribute to Return of the Jedi. Where the book gets truly inventive is with the art and visual storytelling.

The visual hallmarks of manga -- overly-expressive faces, dynamic perspectives to illustrate fast movement, an interplay between super-detail and a more sparse presentation -- fit squarely with Star Wars' blurring speed, spikes of emotion, and swashbuckling action. Combining the two is a no-brainer. Illustrated masterfully by Shin-Ichi Hiromoto, Star Wars: Return of the Jedi -- Manga features a stoic Luke, a Han with a constant smirk, and a menacing, towering Darth Vader. They don't look anything close to photorealistic, and that's the point; Hiromoto is going for the essence of the characters. When Vader first arrives on the Death Star II, he's a massive figure of scratchy blacks and harsh inks -- intimidating, hateful, nightmarish. 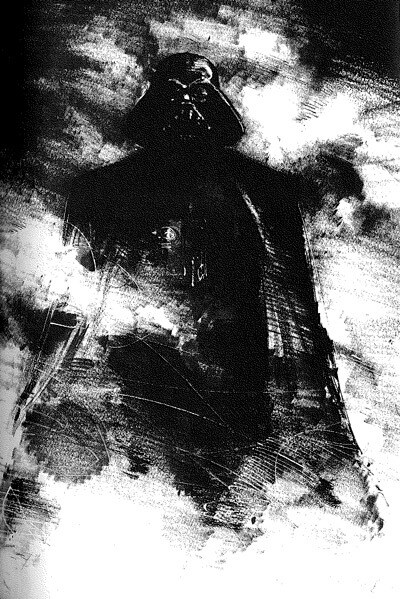 In the attack on Jabba's Sail Barge, Luke seems to move lightning-quick, his proportions awesomely exaggerated, solid lines whizzing all around him. You're looking at static images on a page, but the sense of movement and speed feels very real. It's stunning work, conveying the excitement of the original scene, but not adhering to what was shown on-screen. 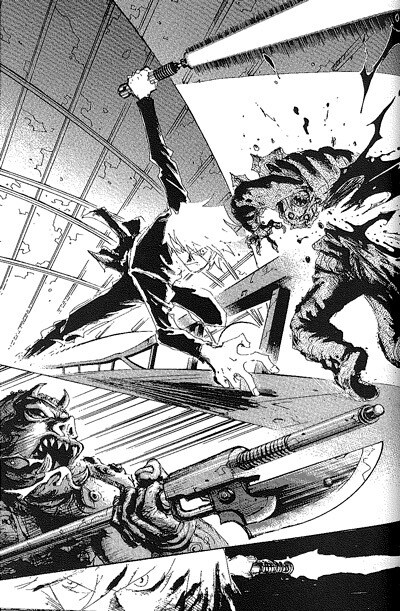 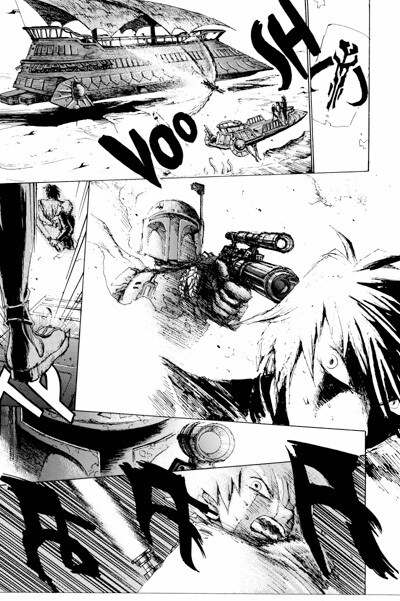 Hiromoto also takes other chances that help tell the story of Jedi in a way that takes specific advantage of the manga/comic form. He plays with the format of comic book panels, stretching them here, bending them there. Or, presenting them in a completely new style, as he does below when depicting the death of Boba Fett. 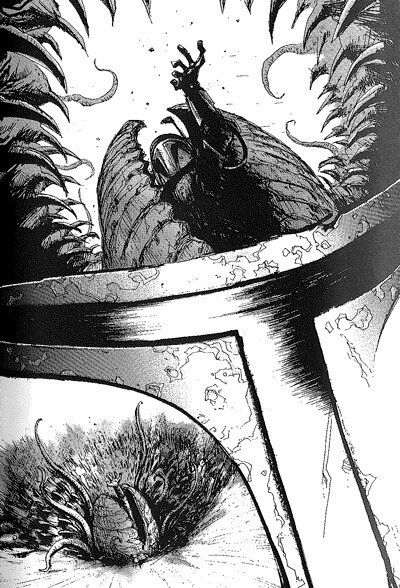 Hiromoto's art doesn't just serve action, however; the quiet moments of Jedi are just as strong. There's a serenity to these scenes that I find really impressive, especially in contrast to how intense the fights are. Note this page, where Luke presses Yoda for the truth about Darth Vader: 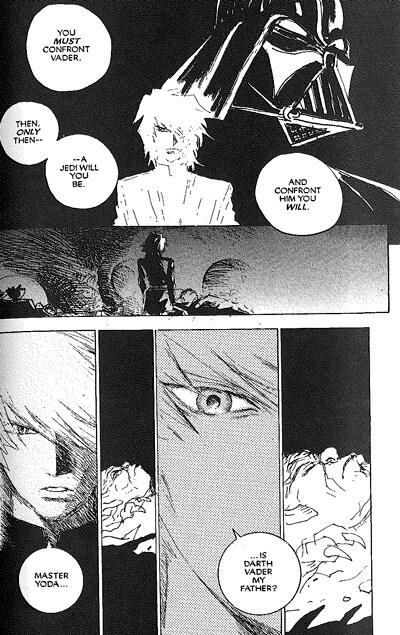 Here, the scene is re-imagined to focus on the dialogue and emotions of the characters. Backgrounds disappear into a stark black, Yoda fades into a whiteness, uncomfortable with what Luke is asking, and the panels steadily zoom into the young Jedi's eye. Vader looms large in Luke's mind, and all that matters is the truth. For one page to convey all of that is a great, great feat.

There are manga adaptations of A New Hope and The Empire Strikes Back, but I rank this version of Jedi higher -- even if it's not my favorite Star Wars film. Return of the Jedi, with all its weird aliens, lightsaber action, and speeder bikes, is maybe the most comic book-esque of all Star Wars films; Hiromoto, by taking Jedi and putting it through a manga filter, celebrates that quality of the film and plays to its strengths. As an artist, he captures all the heart and all the action of the movie and presents it faithfully, but makes it unique at the same time. On those grounds, this adaptation is successful as a Star Wars comic and as sequential storytelling in its own right. And that is the brilliance of Star Wars: Return of the Jedi -- Manga: give it to a Star Wars fan, give it to a manga fan, or give it to a fan of American comics. They'll all find something to love.

Availability: Print editions of volumes 1-4, priced at $9.95 each, can be found in comic shops and most online book stores.

Dan Brooks is Lucasfilm's online copywriter and editor. He spends his days writing stuff for and around StarWars.com, and making sure "Millennium Falcon" is always in italics. He loves Star Wars, ELO, and the New York Rangers. Follow him on Twitter @dan_brooks where he rants about all these things.