Plus, watch a new Funko animation featuring stylized versions of the Mandalorian and the Child from the live-action series streaming now on Disney+.

The Mandalorian's brows are knit in concern. As the Child, Grogu, looks up at his friend and protector, we know it's time for him to go.

A new wave of Star Wars Funko Pop! bobbleheads translates this momentous scene from the season two finale of The Mandalorian into collectible form, tweaking the body language of the hero and his foundling for optimal appeal. But just like on the bridge of Moff Gideon's ship, Mando is not alone. New additions include Boba Fett, his armor bleached and scuffed by the natural conditions on Tatooine; Bo-Katan with and without her helmet; Ahsoka Tano, hood pulled over her montrals and striking the pose of a warrior who's ready for battle; three new versions of Grogu on his own, including mid-snack with a roll of blue space cookies; and the fierce dark troopers, the nearly unbeatable droid soldiers.

StarWars.com recently sat down with Reis O'Brien, Funko's art director, to talk about the latest sculpts to hit the beloved Pop! line and why we just want to clean the crumbs right off Grogu's collar.

StarWars.com: The Mandalorian Season 2 wrapped up in December. How quickly can you and the team turn around a design for a character once you see them on screen? Or did you get a sneak peek at some of these newcomers ahead of their episodes?

Reis O'Brien: Most characters we get to see several months ahead of schedule, like the Gamorrean pit fighters [from an earlier line], so we have plenty of time to work on them, which is of course the ideal situation. But there's always a character or two that are kept ultra-super top secret until the episode airs. That's the point when we've got to get all hands on deck to get the character designed, sculpted, approved and into production as fast as we possibly can. Usually, I'm biting my fingernails on the Friday morning of the last episode waiting to see which surprise character is going to have us running around that afternoon like 'This is not a drill, people!'

StarWars.com: I know I always ask you this difficult question, but can you pick a favorite from these 10?

Reis O'Brien: Oh jeez! Why do you do this to me? It would be nearly impossible to choose a favorite single one from this series. I think we have an extremely strong grasp on the subtle expressions of Grogu's little baby face, so he's always fun to work on. The Ahsoka Pop! also turned out to be utterly sublime. Her pose, with the slight twist of her torso and the way her robes flow around her body is just to die for.

I may be biased, but I felt like our designers and sculptors on the Funko Star Wars team really dug deep and upped their already impressive game for this series. The show itself really inspired everyone to just kill it on these Pop!s. And I think it shows.

StarWars.com: I’d love to just go through each new Pop! with you and talk through the design and details. The Dark Trooper is brilliantly terrifying even in adorable Pop! form, and Ahsoka with her hood up is *chef’s kiss*. But you also let the cute ones get REAL cute -- like, can I just wipe those cookie crumbs off Grogu’s chin? 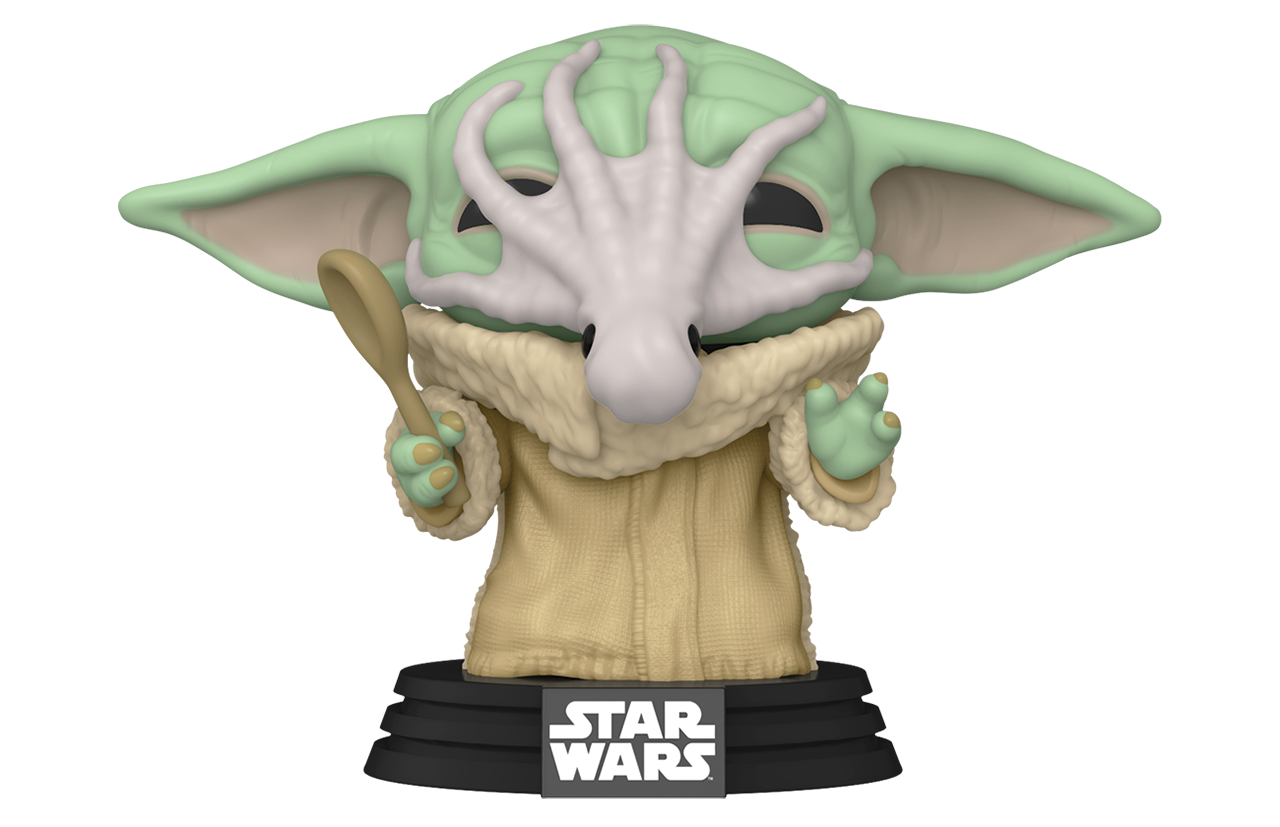 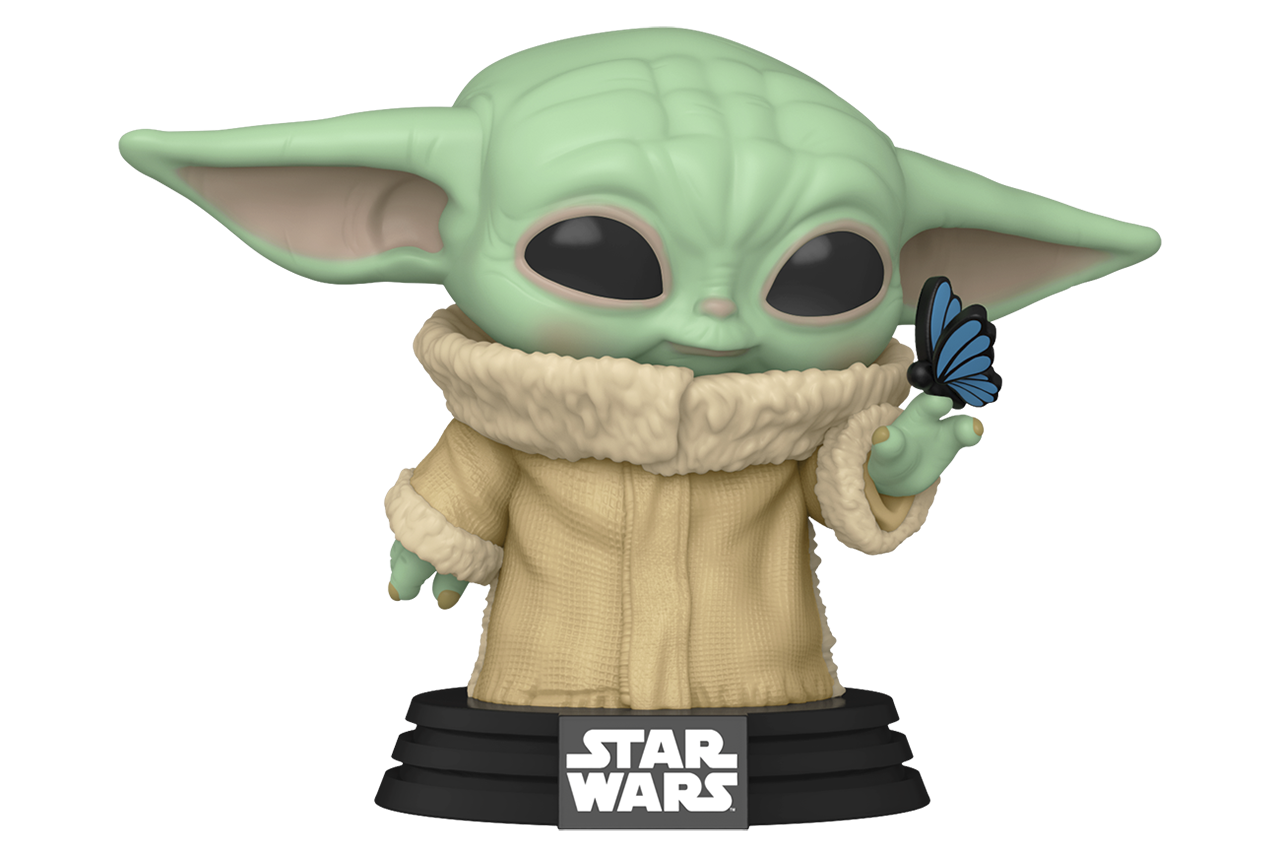 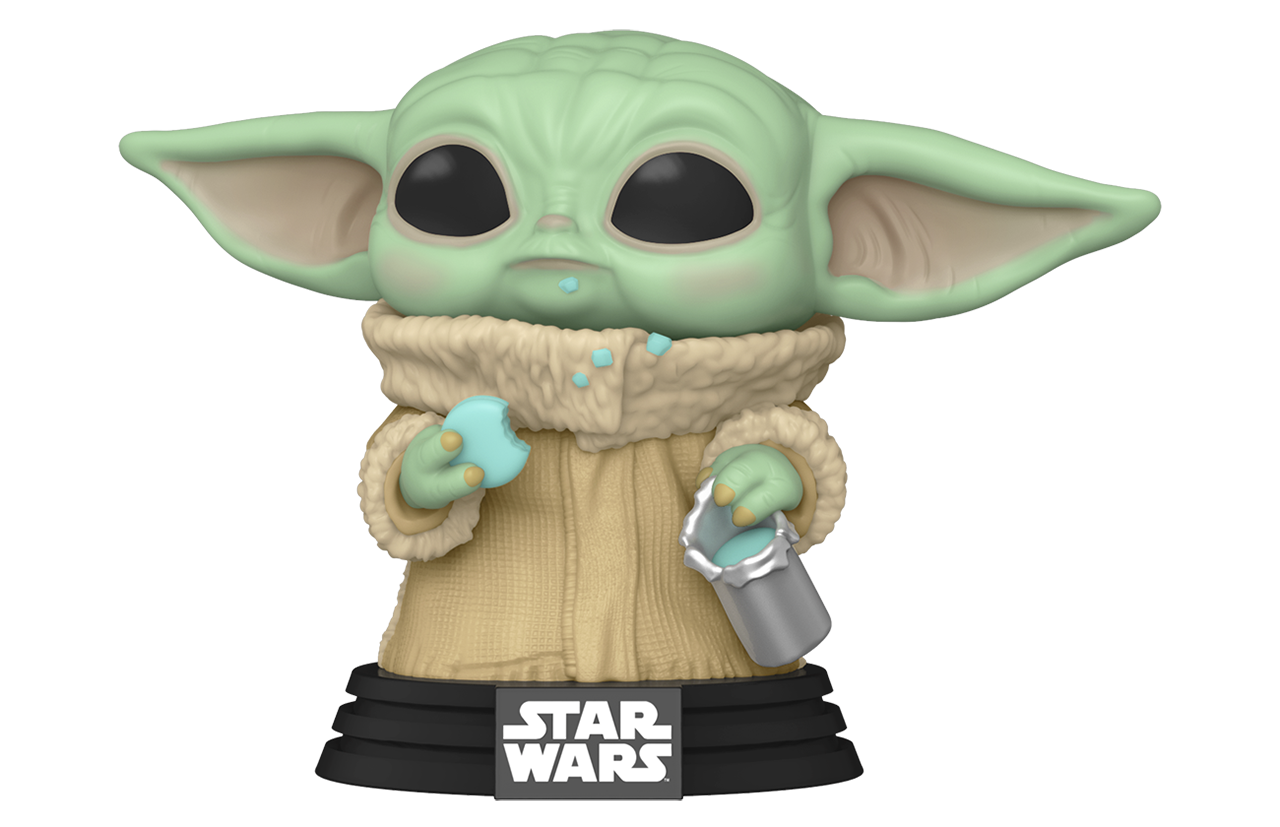 Reis O'Brien: Right?! I just want to brush the crumbs off his little robe and go, 'Who's a messy little Jedi?' 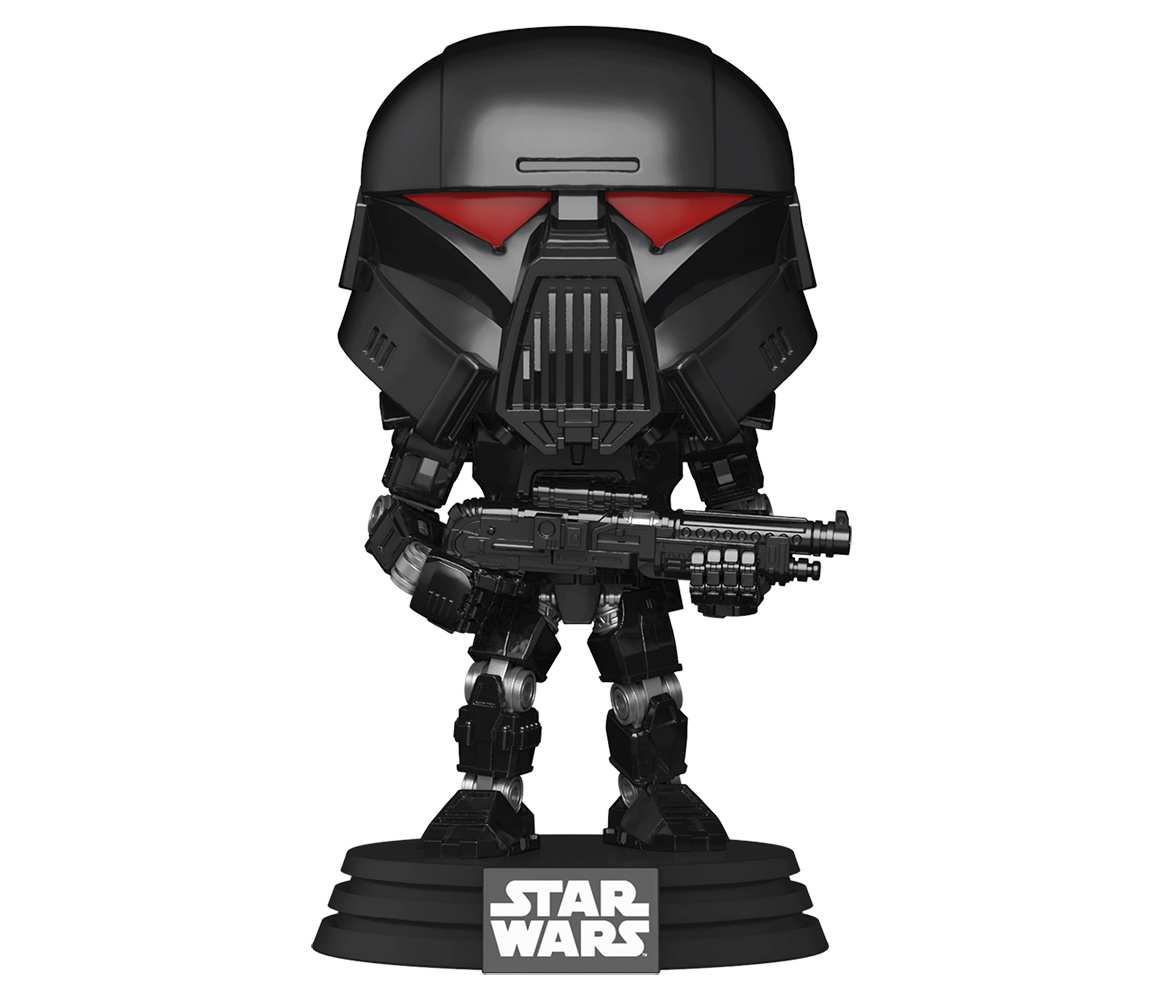 The best part of the Funko Star Wars team is that, over time, everyone has sort of found their specialty. We have one sculptor, Phil Branesky, who is our go-to guy for droids and other mechanical objects. He did an excellent job of capturing that innate cold menace of the Dark Troopers. 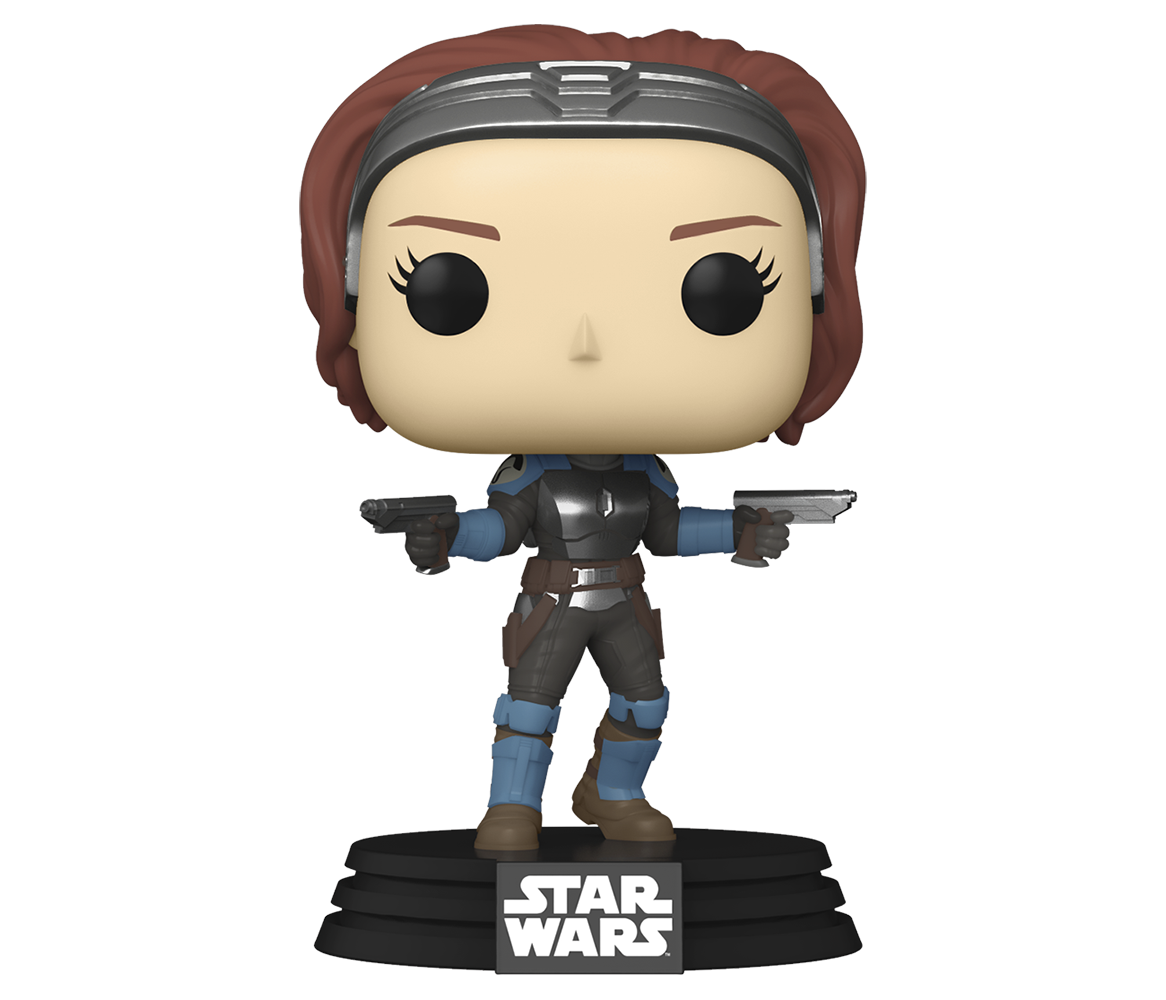 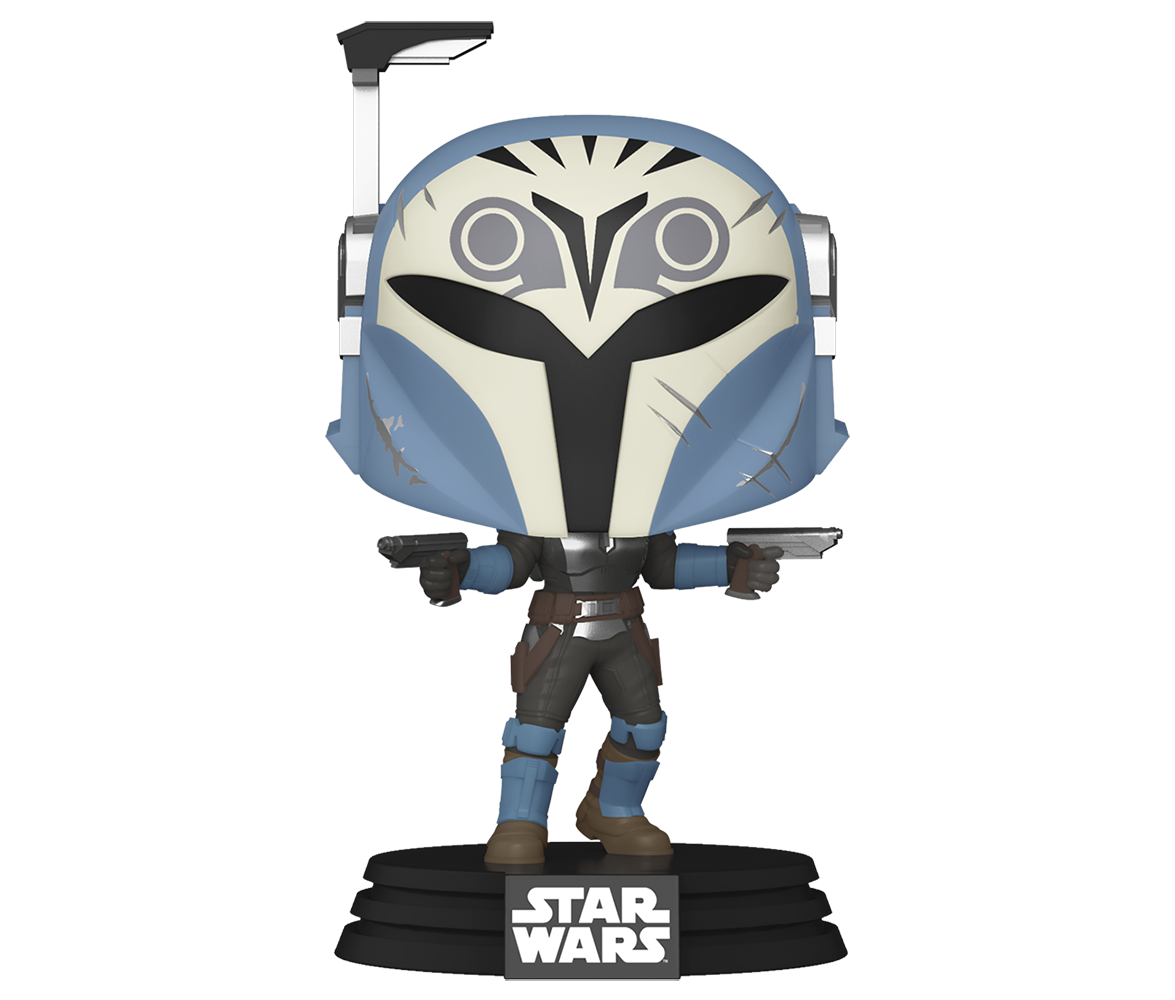 Our lead sculptor on the team, Amanda Brock, has Mandalorian armor and helmets dialed in, so she really got to sink her teeth into a lot of Pops in this series with the addition of other Mandalorians [like Bo-Katan] and Boba Fett in the show. With those characters, you really have to try and capture something as elusive as 'coolness' in something as traditionally cute as a Pop! It's a tricky thing to do.

And Bo-Katan was a fun challenge because we had already made a version of her in our Star Wars: The Clone Wars series. So we had to be very careful that each version maintained the proper feel since one is the animated version and the other was live action. Most of that was achieved in sculpt, aiming for a more organic, realistic look over the previous version that was more angular and sleek. Another tactic we used was to stick to a slightly more muted, realistic color palette for the paints and pad prints. Animation is innately more vibrant by its very nature, so calming down the colors on the live-action version helped seal the idea that this is a character that was seen on film. So it was a lot of fun to see the two versions side by side, and although they are both clearly the same character, you can immediately tell the source material for each. Also, we got to make an unhelmeted version of her, which is a fun bonus. 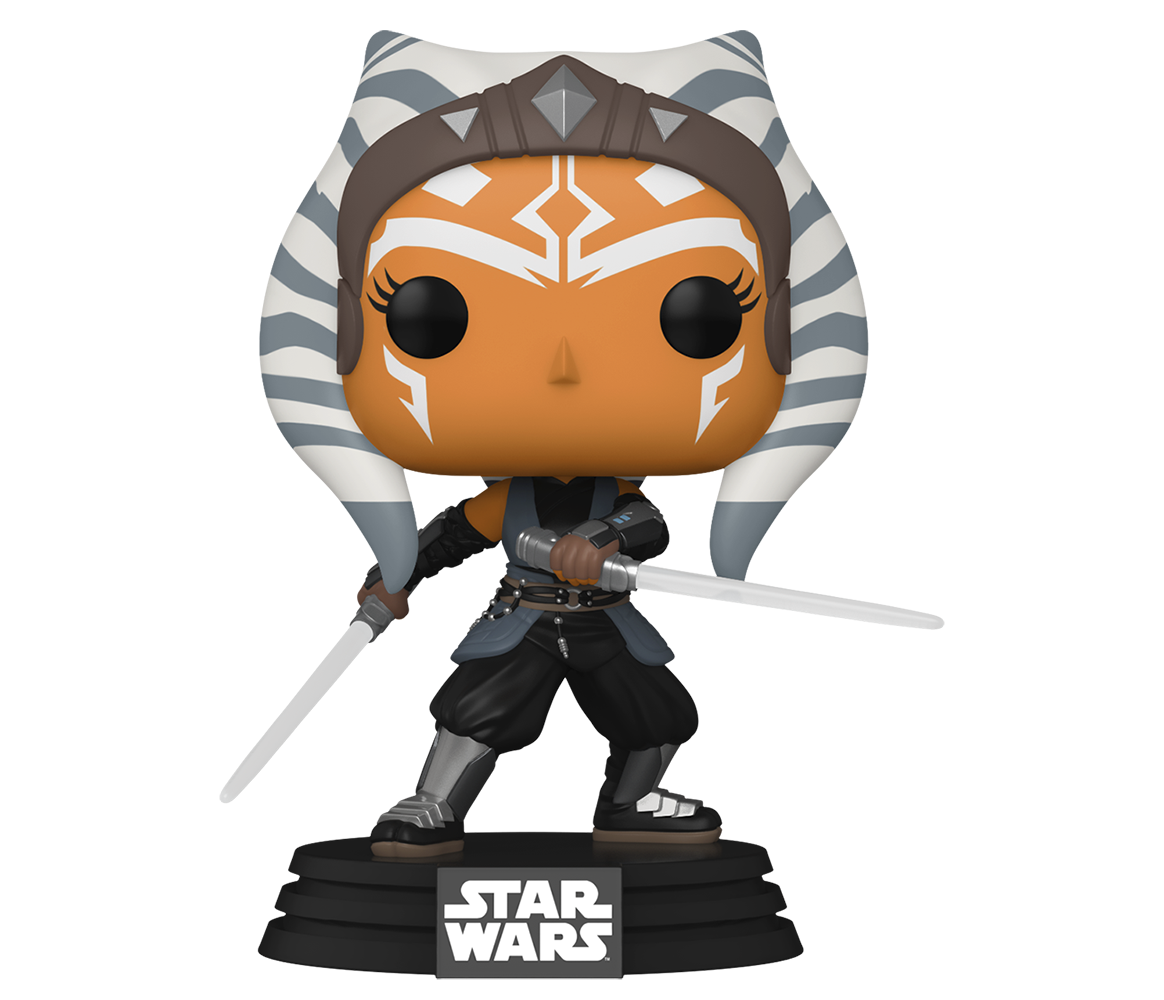 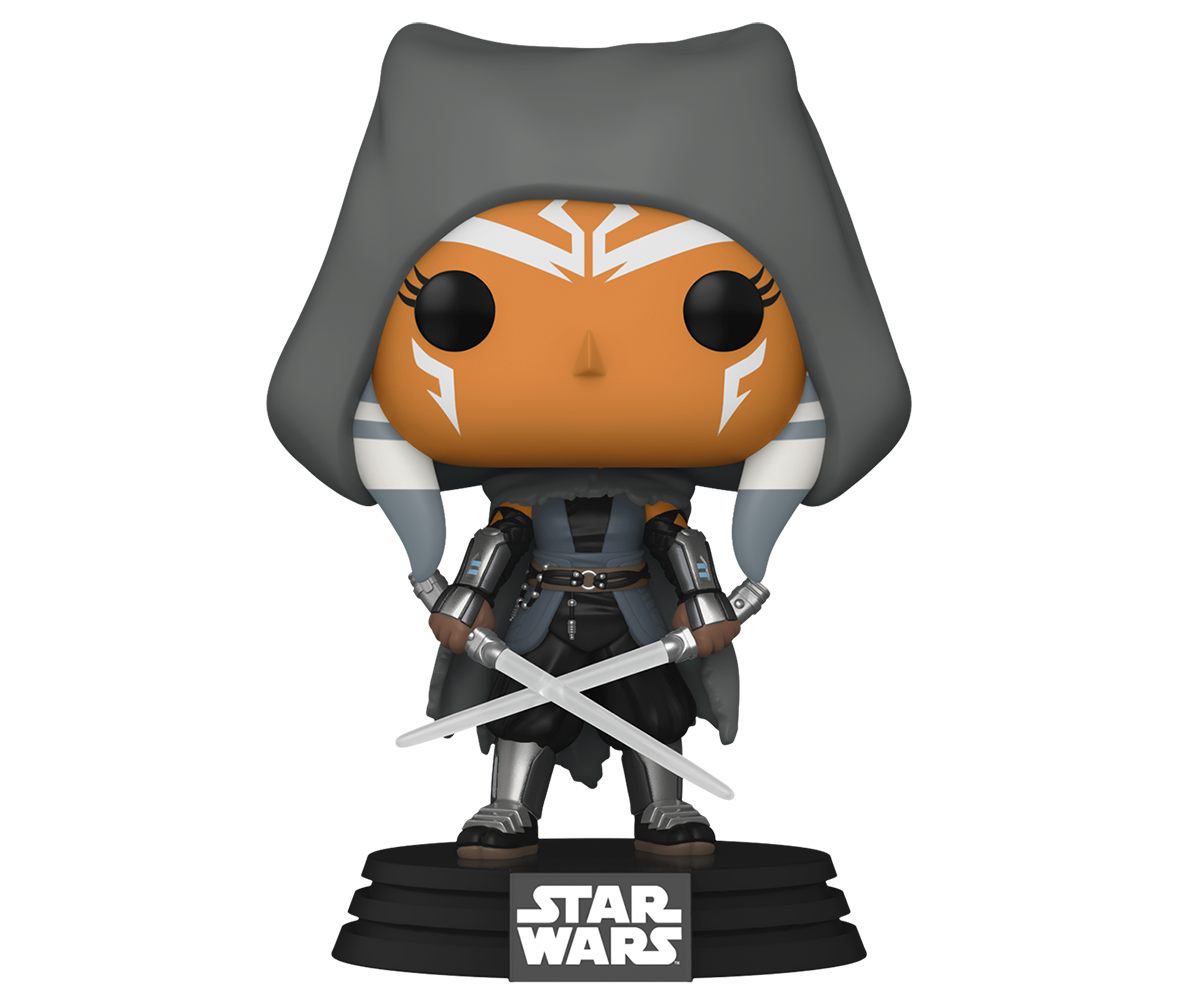 Amanda worked alongside our concept artist, Meg Dunn to nail down that confident but dangerous feel for our Ahsoka Pop! Her character is very peaceful, but you can tell that she has a hidden reserve of dangerous energy at her disposal. I loved how we ended up showing that inner strength while maintaining that Pop! cuteness without them contradicting each other. 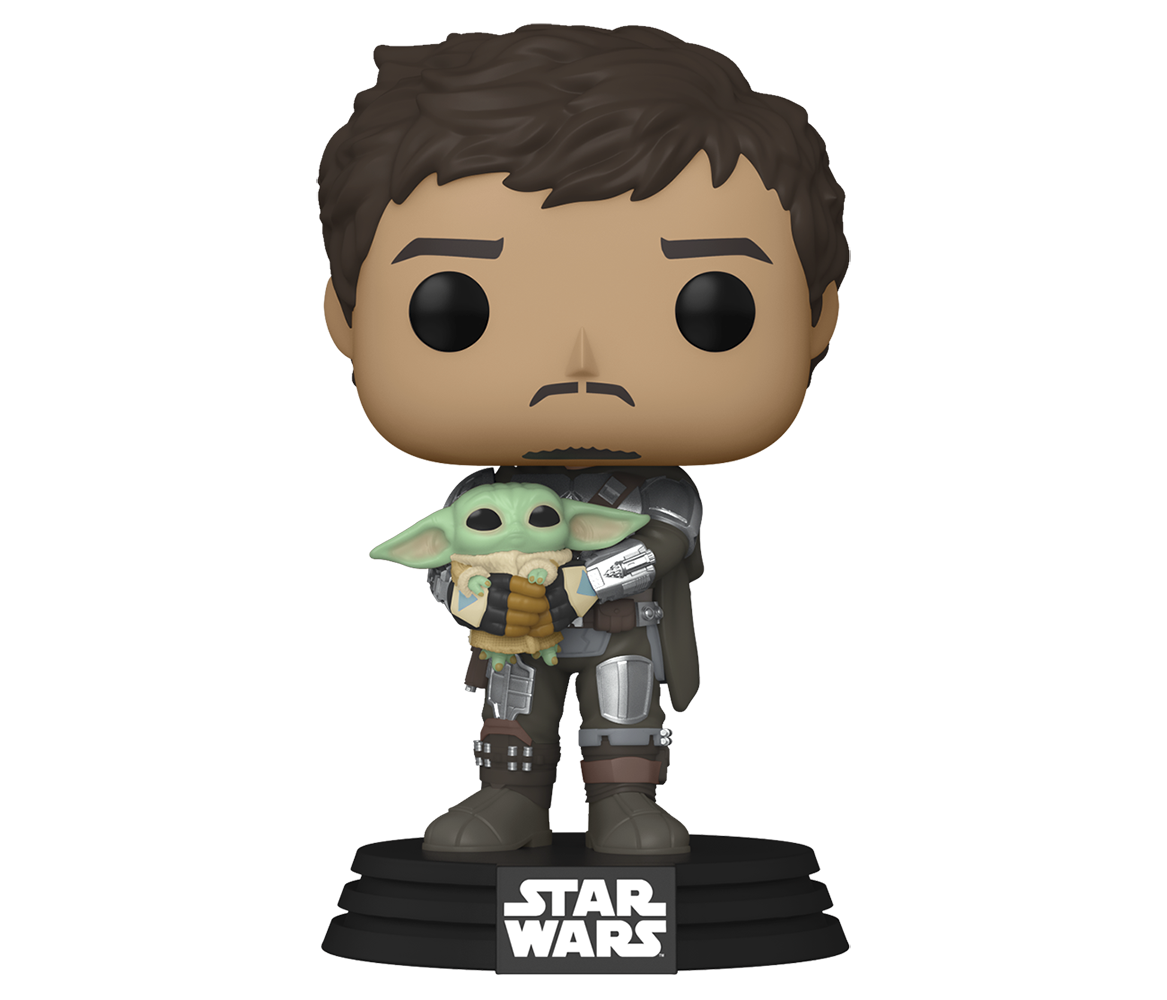 StarWars.com: There’s a lot to love but Mando WITHOUT helmet holding the child is probably my favorite. How did you arrive at the pose for this one?

Reis O'Brien: This particular pose came out of necessity. In the episode, I believe he's holding the little guy facing toward him, but that wouldn't really make for a great Pop if you were just looking at the back of a Grogu. So we made the choice to have Mando holding him facing outwards, as if watching the newcomer who is walking through the bay doors. My favorite detail on that one is the slightest little upturn of Mando's eyebrows that our designer Meg added. It such a small adjustment but it really pushed the expression into that 'reluctant sadness' realm. I know it sounds funny to talk that way about a Pop, but you can really get a lot of emotion out of them with just the smallest nudge of a pad print. 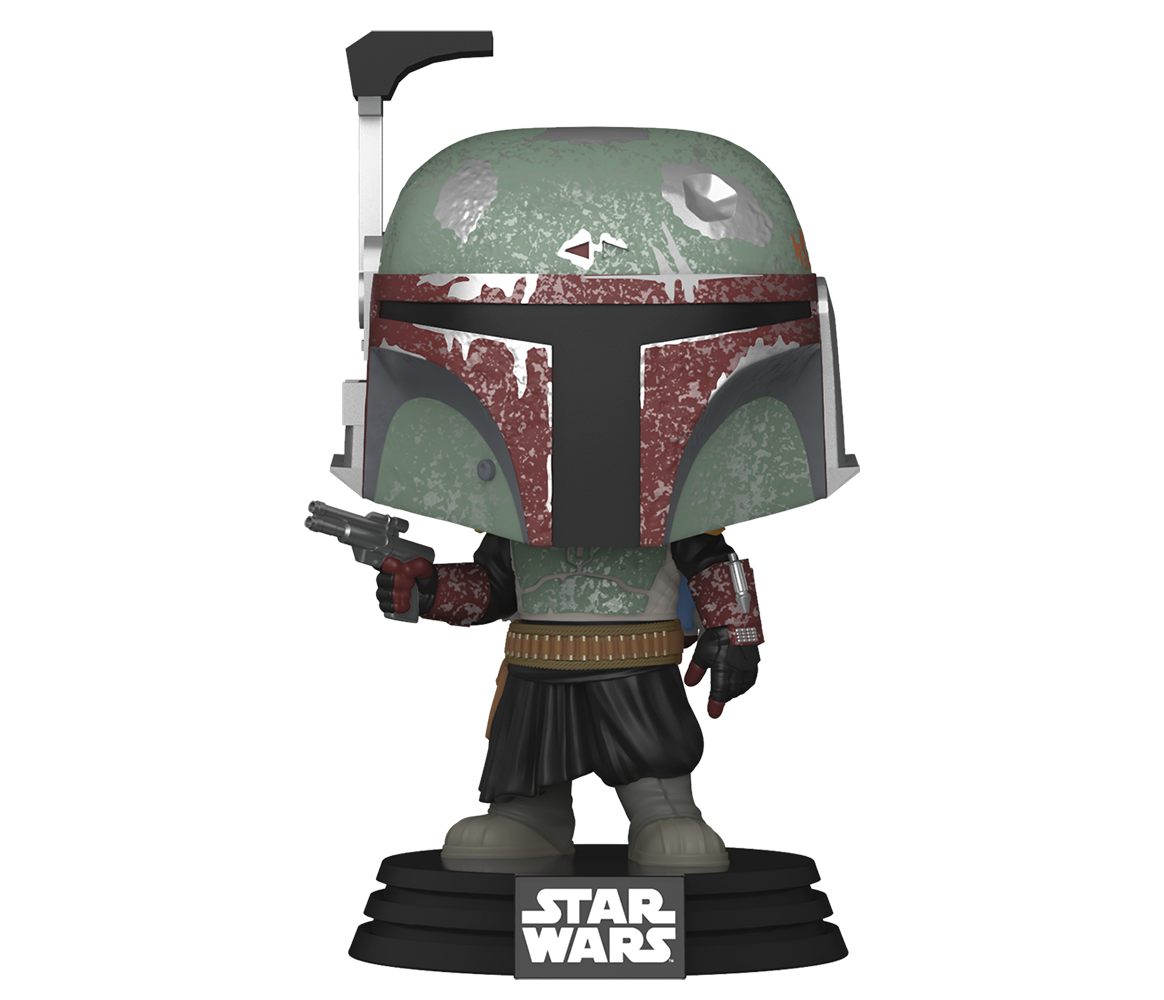 StarWars.com: The weathering on Boba Fett looks so great but I imagine it’s deceptively hard to get it just right! Which bobblehead in this line was the biggest challenge?

Reis O'Brien: We took one look at the reference for a Boba Fett, pre-new paint job, of course, and thought, "Oh man... how are we going to pull off this weathering?" Weathering and textures are notoriously tricky in toy design, and can come out looking all wrong very easily. Boba Fett's armor had been basically getting slowly sand blasted on the dunes of Tatooine for five years or so, which makes for a very specific texture.

But there's only one way to work something like this out, just come up with an idea, send it to the factory and hope for the best. Then you can adjust from there. We fully expected a series of back and forth changes to get it just right. I worked with our designer to come up with a combination of dry brush techniques and something called sponging, where you basically repeatedly dab a very tiny amount of metallic silver over the base color with a textured soft object like a sponge or the end of a paint brush. And all of this has to be done by hand. No machine is going to give you this effect, at least not well.

So we sent off the instructions, and when the first paint turns came back, we were stunned. It looked absolutely perfect on the first try! I couldn't believe it! The designer and I high-fived over a Zoom call on that one. Sometimes you've just got to count your lucky stars in toy design. Victories like that don't come around often.

StarWars.com: What’s next for Funko and Star Wars?

Reis O'Brien: You could threaten me with carbon freezing and I wouldn't tell! But trust me, you won't be disappointed.

Watch a new Funko Pop! animation featuring the Mandalorian and Grogu to celebrate the release of this new wave of collectibles.