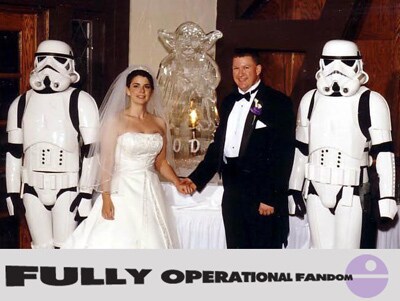 Hello and welcome to my first edition of Fully Operational Fandom! I'm excited about my new column because it's going to be all about the fans. Star Wars enthusiasts make up the most passionate fan community I've ever experienced, and I'm continually impressed with how people channel their love for the galaxy far, far away. A common appreciation for Star Wars has been known to bring people together and for some, it's meant romance.

Though some believe opposites attract (and that can definitely work), it can be fun to share your love about a given topic with your significant other. Especially when the topic is a major part of your life. It makes for fun debates over dinner, it leads to possible couple-themed cosplay, and it means you always have someone to call when Episode VII news is announced. Even if you have a Hoth-like heart, you'll appreciate these stories about couples who bonded over their excitement for Star Wars. Some even incorporated the saga into their wedding.


Paul DePaola (member of the 501st Legion) and his wife began their relationship with a Star Wars movie: “My first date with my now wife was to the premiere of Episode I in 1999. We had some Star Wars in our wedding, but it was just small things like the music and we named the tables at the reception after Star Wars planets. Even going so far as to put her family at Naboo and my family at Tatooine.”

What I want to know is who got stuck at Mustafar? 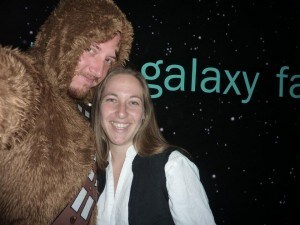 Some people don't meet their significant others because of the movies, but it still becomes part of their lives together. Aurora Long and her boyfriend go to Star Wars events, and she got him to be her Chewbacca: “I didn't necessarily meet my boyfriend through Star Wars but it has definitely been a big part of our relationship. I dress up as Hannah Solo for conventions, so he made sure to get a furry Chewbacca sweater to wear with me.”

In this case, it's good to kiss a Wookiee. 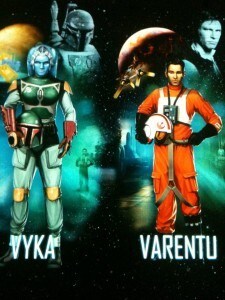 Star Wars brought Justus and Geneviève Bowman together but in a different way than I've heard before. They fell in love while playing Star Wars: The Old Republic. Justus played a Sith warrior and Geneviève was a Chiss bounty hunter -- it was a match made in cyberspace. The couple later wrote a thank you letter to BioWare:

“Atop the snow-covered peaks of Hoth, contrary to our mild expectations, a bounty hunter and Sith warrior fell madly in love. And that love was as deep as the valleys we dove headlong into time and time again (my fault); while we burned our virtual enemies to the ground, we spoke of family, finances, and the true meaning of love and life. The Force was with us!”

Always, two there are. They had their first in person date at the Star Wars Identities Exhibit in Montreal.

Always, two there are. They had their first in person date at the Star Wars Identities Exhibit in Montreal. They tied their wedding back to their time in-game on Hoth: their cake featured Han and Leia on the ice planet. Awww! 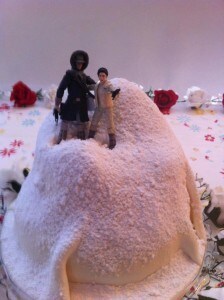 Having a Star Wars-themed cake isn't the only way you can add the Force to your wedding. Cheyenne Milner (also a member of the 501st legion) and her husband Michael were married by Darth Vader and a Stormtrooper. Naturally. Milner met her husband online and realized they had a mutual friend who was also in the 501st. “It was during that date we discovered we were both huge geeks that loved sci-fi. I think he fell in love when he found out I was an Imperial Guard in the 501st. The Force was with us.” 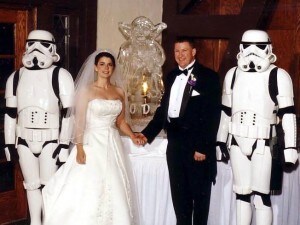 Finally, you can fully commit to the theme throughout the entire wedding. That's just what Jon and Susie Leopold did, and it looks like it was quite the event. They had a Yoda ice sculpture, a 15” R2-D2 toy sporting a bow tie who greeted guests, a gorgeous white cake featuring Han and Leia with the Imperial and Rebel symbols on the side, themed music, and more. It all started because they met in TheForce.Net fan forums. They've both loved Star Wars since they were kids so it was a given it would be included in their wedding. Jon pointed out it's possible to make a themed wedding classy:

“While the wedding was Star Wars-themed, we made sure it was still elegant. We did have some "aggressive negotiations" with our parents to include the Stormtroopers for wedding party honor guards. Afterwards, they agreed it was a great addition. My cousins particularly loved dancing with them. Many guests said it was the best wedding they'd ever been to.” 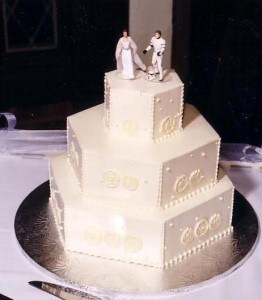 Why don't I ever get invited to weddings that have an astromech? One of these days.