We hope you can attend when the new book by Beth Revis arrives this summer.

This Valentine's Day, StarWars.com is thrilled to reveal Star Wars: The Princess and the Scoundrel, a new novel from author Beth Revis arriving this summer. Set just after the events of Star Wars: Return of the Jedi, the story begins on the forest moon of Endor, where Han proposes in the elation of the rebel victory against the Empire. After a ceremony at the site of the victory celebration at the end of the film, the newlyweds depart for a honeymoon aboard the Halcyon starcruiser, the luxury vessel at the heart of the new Star Wars: Galactic Starcruiser experience at Disney World Resort. In their most desperate hour, with the war still raging but the Empire nearing its last gasp, the couple must outwit the Imperial remnants clinging to power.

StarWars.com recently sat down with Revis to talk about her love for Leia, how her husband helped refine the dialogue for Han Solo, and the power of love amid the chaos of a galaxy at war.

StarWars.com: First things first: congratulations on your new book! You've written some amazing Star Wars heroines including Padmé, Ahsoka, and Jyn. What was your reaction to learning you would get to write Leia -- and fresh off the rebel victory at Endor no less?

Beth Revis: I have often said that my two favorite Star Wars movies are Return of the Jedi and Rogue One. Getting to write Jyn Erso was a dream come true, and my first journey into writing for Star Wars. But Leia has been my hero for as long as I remember -- I grew my hair long to be like her, and I even had a brother named Luke! She was my princess when I was a child, and she became my general when I became an adult. I can only hope that I’ve done her justice in this story.

StarWars.com: How did you approach this story?

Beth Revis: The first thing I did was watch all three of the original movies again (how am I lucky enough that this is my job?!). My initial instinct was to focus on Return of the Jedi since this book picks up right after it, but as I dug into the story, I found myself watching The Empire Strikes Back on repeat. The emotional beats of Han and Leia’s relationship start to spin out in Empire -- it’s not just the famous “I know,” line, but it’s the way Leia relates how she doesn’t trust Lando and Han responds with seriousness, the way their trust builds, all the moments that lead up to their confession of love. By the time Return of the Jedi picks up the story, Leia’s been left with that confession long enough to get comfortable with the idea of it. It’s one reason why the relationship between the two works -- Leia was always going to be someone who had to think about something like love, and Han was always going to be someone who just followed his gut. The time lapse between those two movies helped them both evolve so that they’re on the same page by the time Han is unfrozen.

I took pages and pages of notes on their dialogue, their mannerisms, the subtle ways they interacted. Carrie Fisher and Harrison Ford are simply brilliant actors, and they gave me a lot to work with! I wanted this to be a story where the past was still present, but they were moving forward into new territory. It’s an emotional journey -- the aftermath of war always is, but so is the new foundling steps of love. 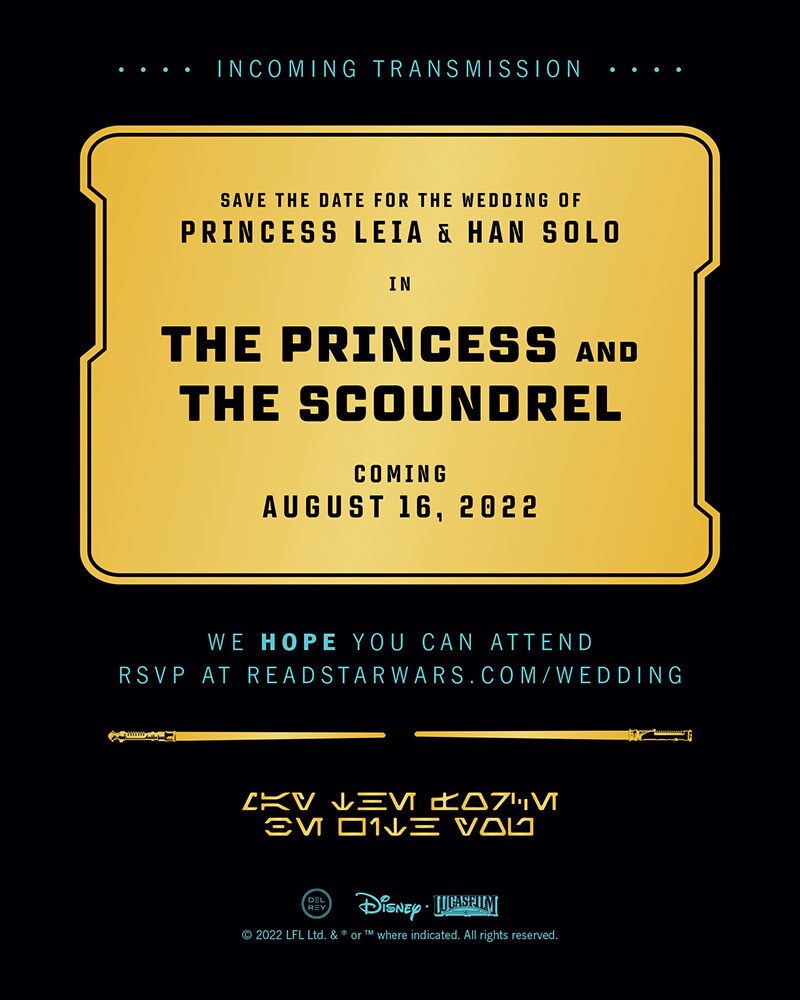 StarWars.com: Of course, there's plenty of time to explore my favorite scruffy-looking nerf herder. What did you find most challenging about writing Han and Leia as individuals and as a couple?

Beth Revis: I tested every single line of banter out loud as I wrote it! Thankfully, I married my own scruffy-looking nerf herder, so I’d corner him while I was writing and we’d go back and forth with the dialogue to make sure it sounded correct. Bickering is Han and Leia’s love language, after all! I can happily blow up ships in space, but finding the right balance between funny and romantic in their dialogue was perhaps the most difficult thing of the whole book.

For Han, I wanted to make sure the emotion was still true behind his bravado. No one has ever accused Han of being in touch with his feelings, but he’s a smart guy with strong instincts, and he knows what he’s doing, whether that’s kissing a girl or shooting a blaster. So he is aware that his relationship with Leia can never truly be uncomplicated, but he still has enough confidence to think that it’s worth the try.

On the flip side, I needed to ensure that Leia’s leap of faith in her personal life rang true. I’ve always seen her as someone who can lead troops better than her own heart, someone who’s compartmentalized herself for her own survival. Unwinding that became crucial, and I found the most helpful resources for those feelings in the comics, particularly the Star Wars comics that bridged The Empire Strikes Back and Return of the Jedi, but also in [Marvel’s comic book series] Shattered Empire.

StarWars.com: Hope was an important undercurrent in your book Rebel Rising, which explored Jyn Erso's life before the main events in Rogue One. What are some of the recurring themes readers can expect in this tale?

Beth Revis: One thing that I love about the new movies is that Leia and Han don’t actually end up in the idyllic perfect family life that we like to think of as a “happily ever after.” Instead, they have to work -- for decades -- to remain in love, and they consistently choose to make that happen. Even if they’re apart, they’re still in love, not because of fate, but because they choose to be. And that’s stunning. That was what I wanted to show about them as a couple -- that they had a choice to make, and they chose each other.

It’s a variation of hope, in a way, which is the founding principle of all things Star Wars. The idea that every day, we have a choice. And we just have to continue to choose love and hope. At any point, we can walk away when things get hard. But choosing not to -- that’s what real love is about.

StarWars.com: We've already seen Han and Leia cleaned up for the Medal of Yavin ceremony. What can you tell us about their wedding as you've envisioned it?

Beth Revis: I don’t want to spoil anything as the wedding is possibly my favorite scene of the whole book, but I will say that when Ewoks are involved, nothing ever goes to plan!

In all seriousness, though, what makes the wedding scene my favorite is the ring ceremony. The rings become an important symbol throughout the book -- I’m being vague on purpose so I don’t spoil anything, but I think it’s true of all societies, whether they be on Earth or in a galaxy far, far away, that ceremonies become a necessary component of culture. We ascribe value to specific moments, and we bring up importance to symbols from those moments, including wedding rings. A wedding is like a bright star in a person’s life -- a fixed point of light. And that’s true for Han and Leia as well.

Star Wars: The Princess and the Scoundrel arrives August 16 and is available for pre-order now.