Get a sneak peek at some new items arriving in our galaxy on Force Friday II!

New Star Wars products -- including many inspired by Star Wars: The Last Jedi -- hit stores on Force Friday II. And if you're wondering what you might find, fear not: StarWars.com has the intel you need. Check out the guide below to see some of the toys, clothing, and other Force-powered items arriving in our galaxy tomorrow! 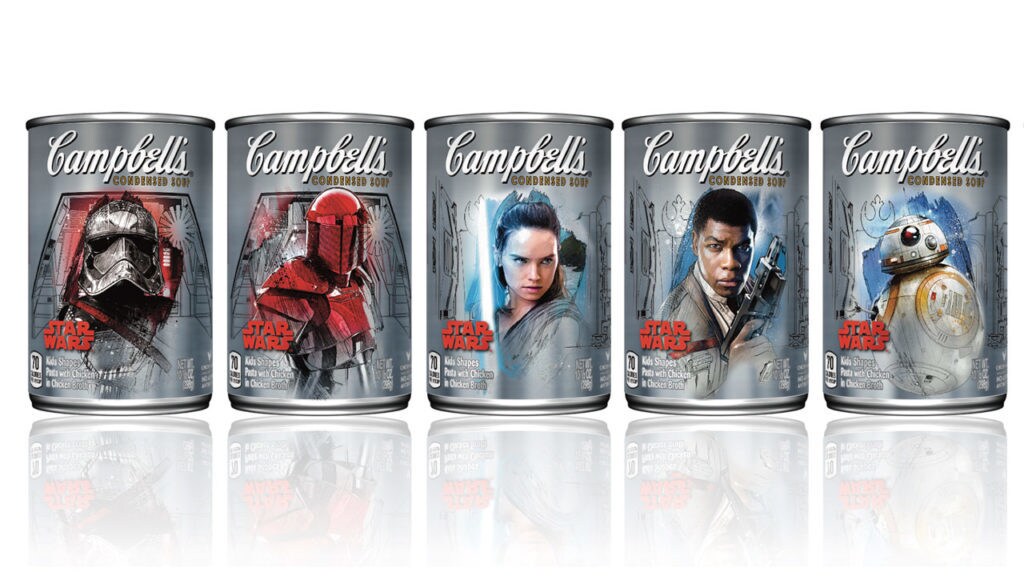 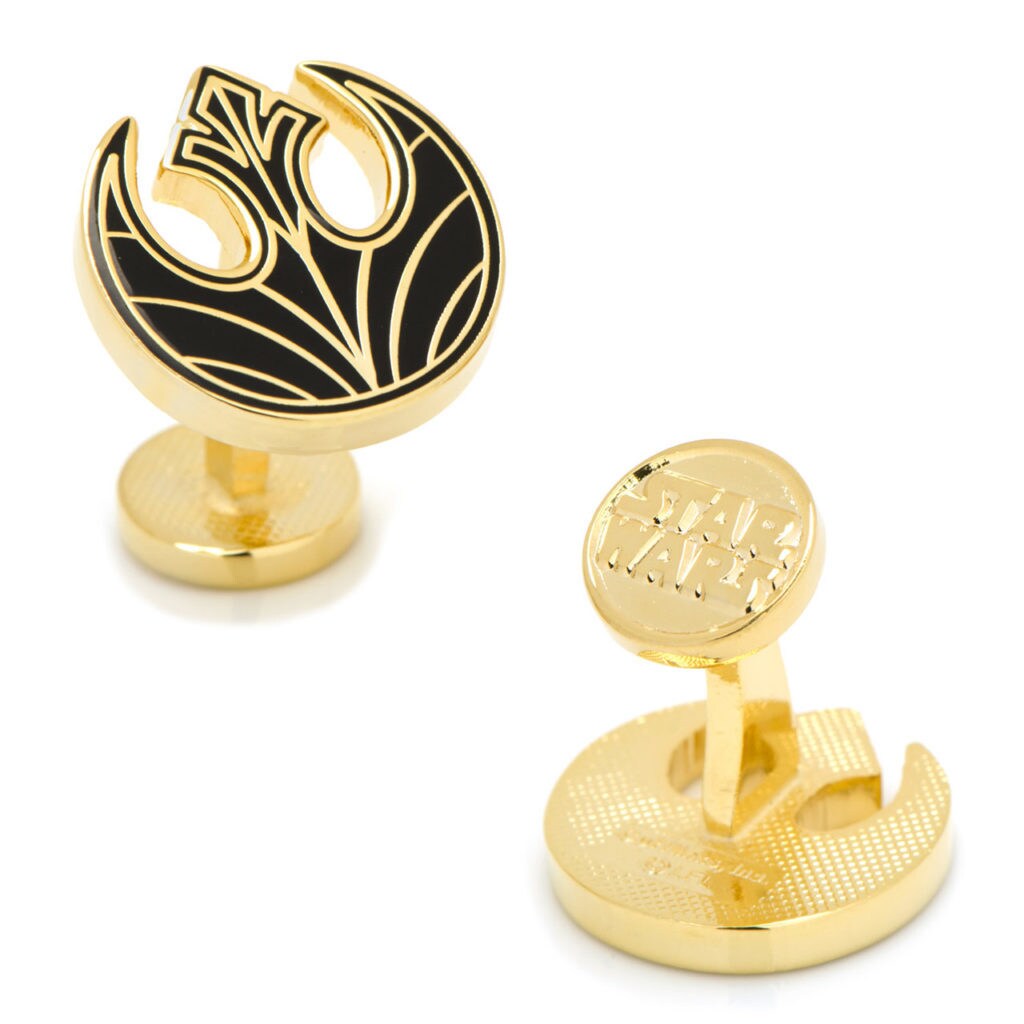 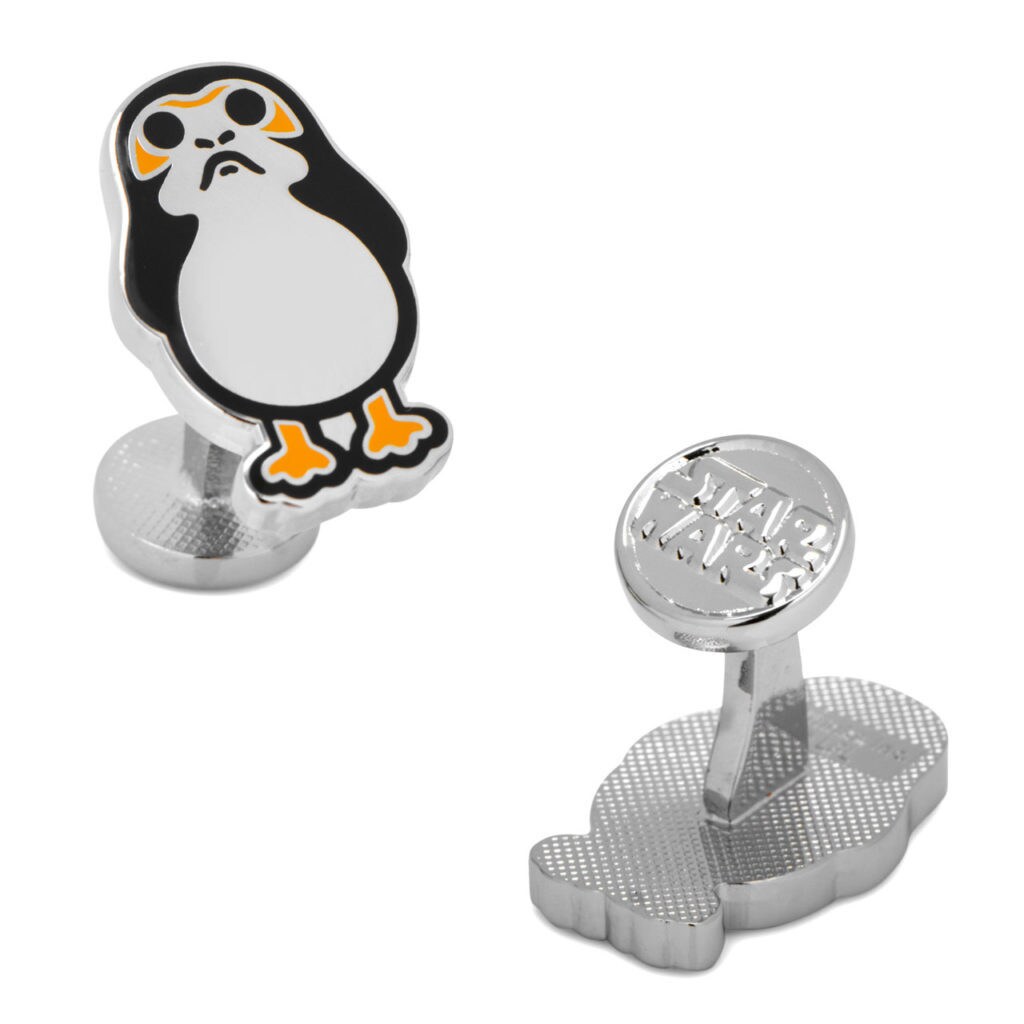 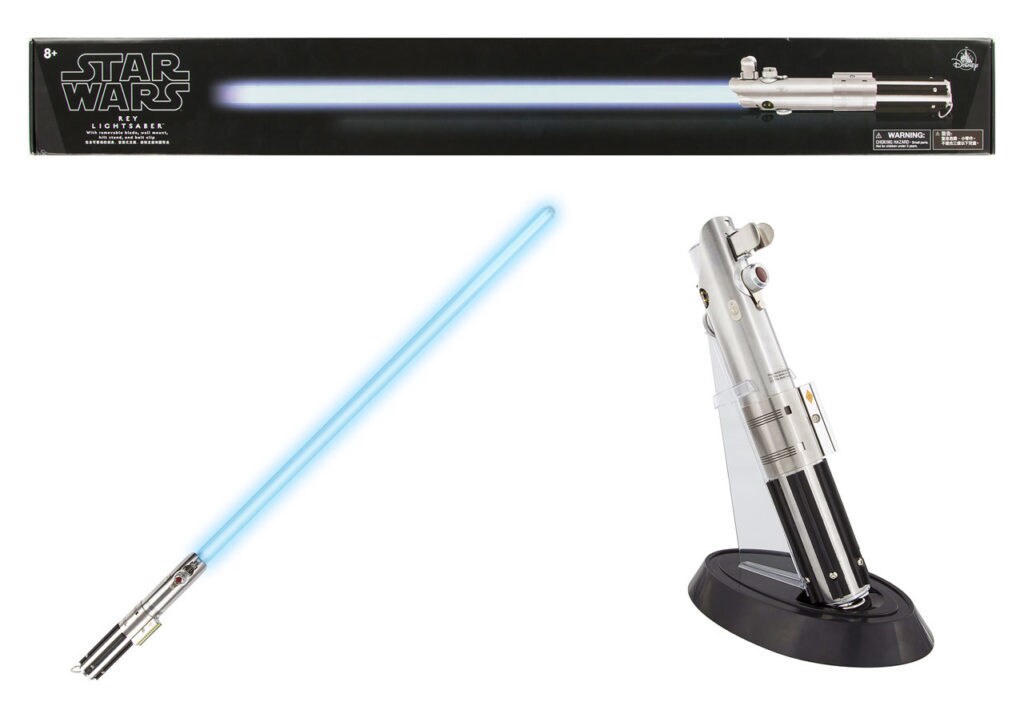 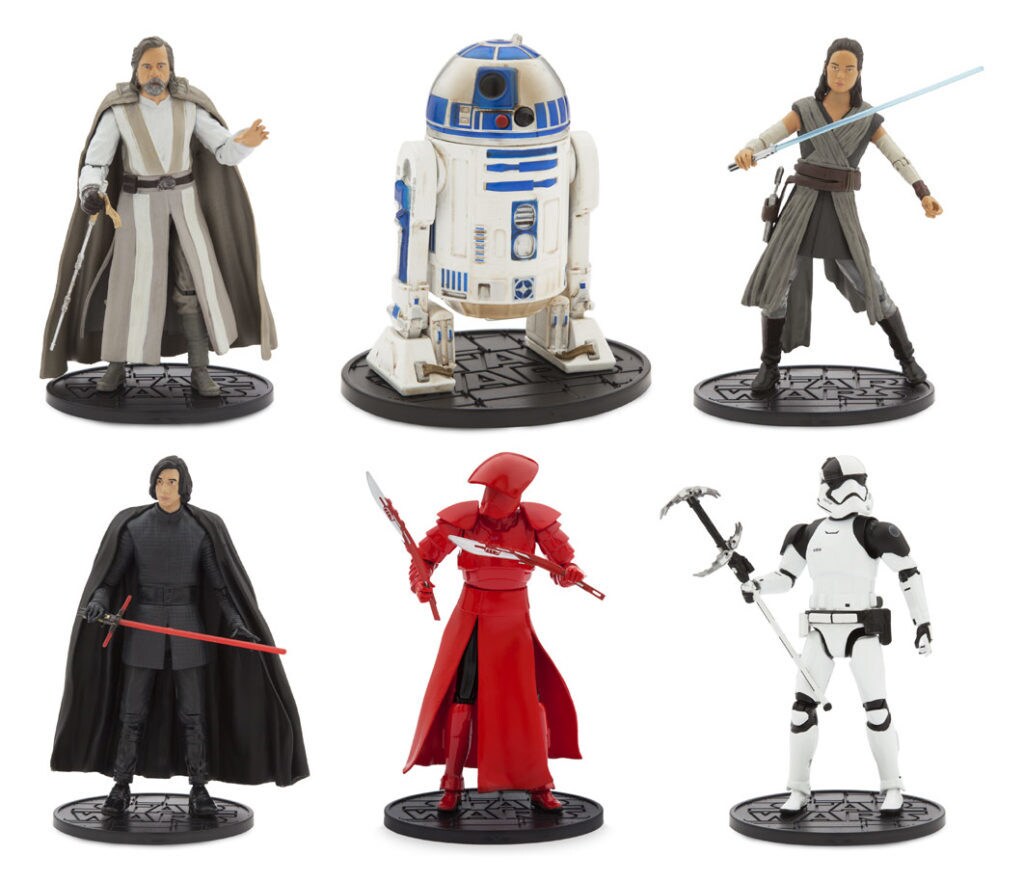 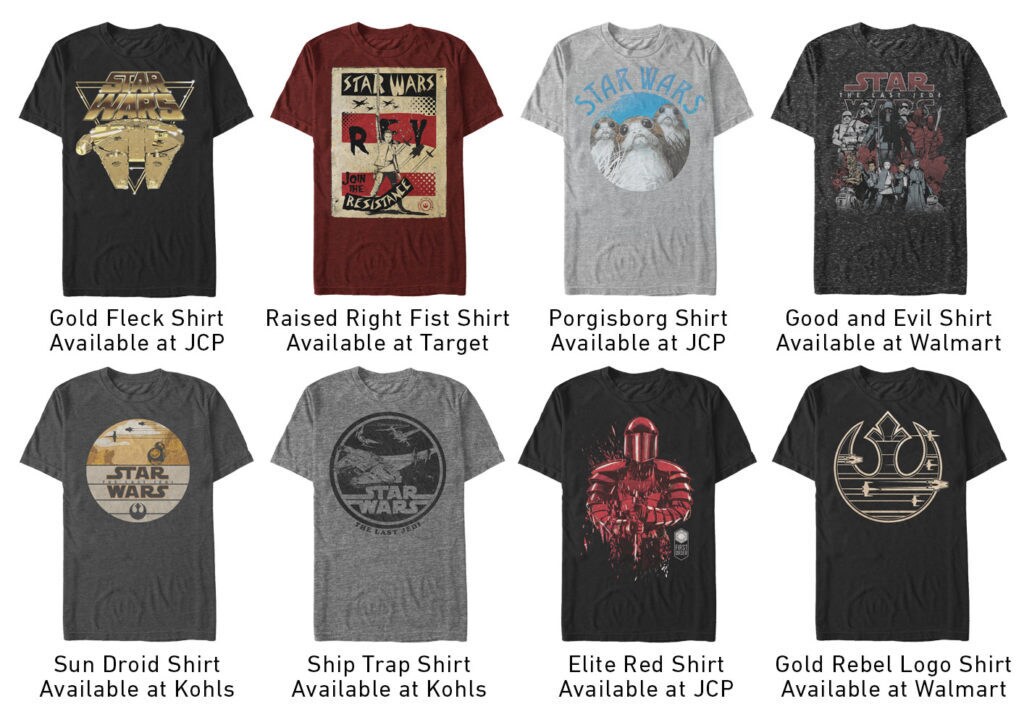 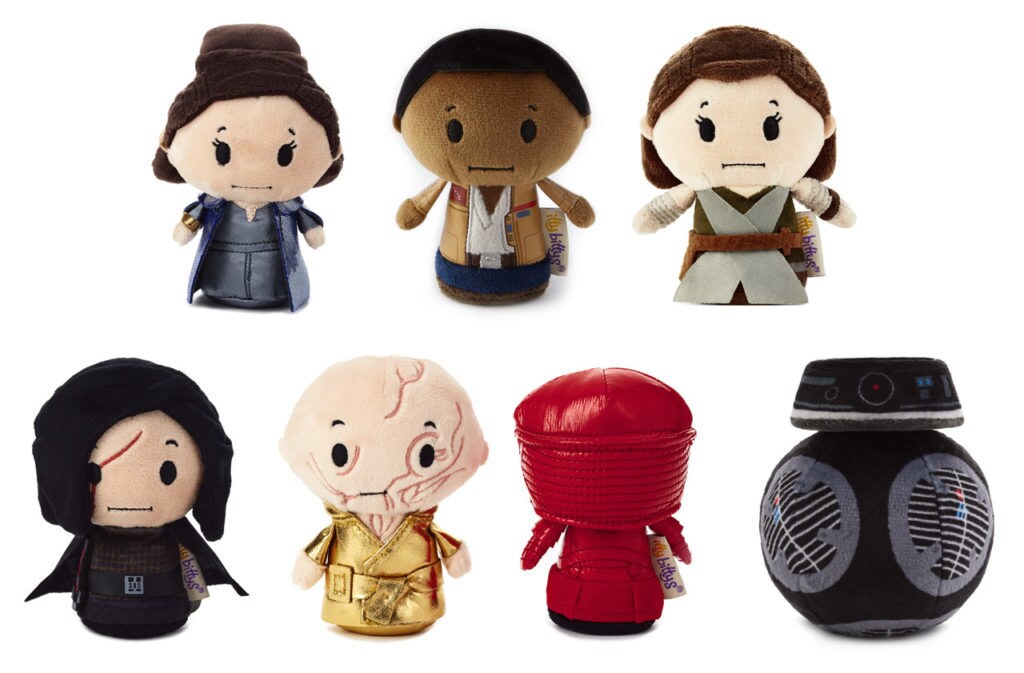 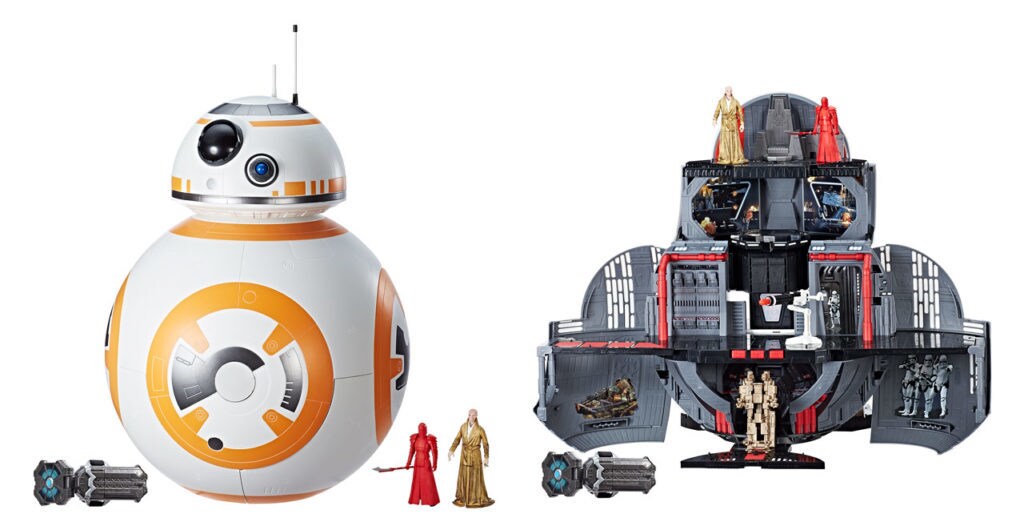 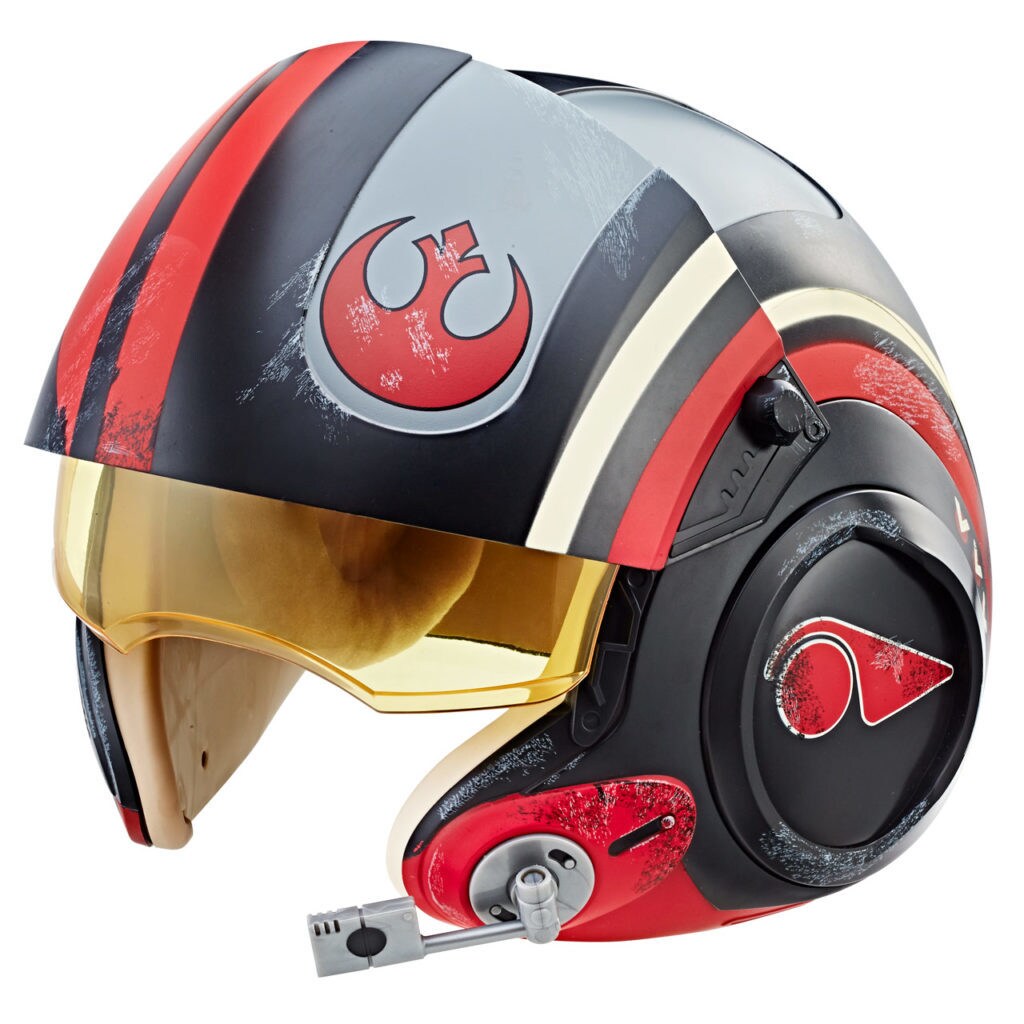 Star Wars The Black Series Poe Dameron Electronic X-Wing Pilot Helmet: Kids and fans alike can imagine the biggest battles and missions in the Star Wars saga with helmets from The Black Series! With exquisite features and decoration, this series embodies the quality and realism that Star Wars devotees love. An ace X-wing fighter pilot, Poe Dameron is a leader in the Resistance’s fight against the evil First Order. Imagine soaring into battle alongside the Resistance with this Poe Dameron Electronic X-Wing Pilot helmet that features an internal microphone that activates battle sounds and interaction with Poe’s right-hand droid, BB-8! Helmet also features a retractable polarizing visor and speech projector, so kids can imagine gearing up like Poe Dameron and blasting into the fight against the First Order. 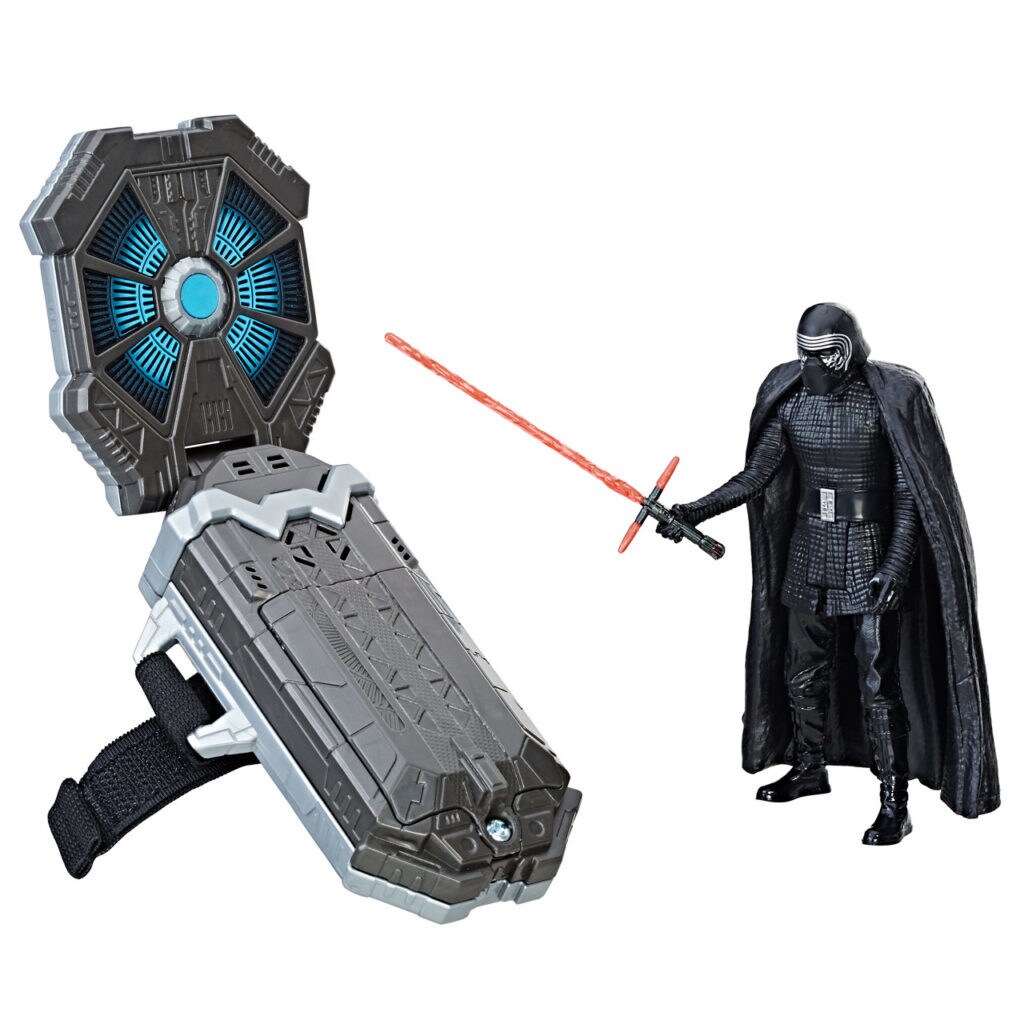 Star Wars Force Link Starter Set: Bring the galaxy to life with Force Link! Recreate the adventures of a galaxy far, far away with Force Link, a new interactive play system from Hasbro that gives kids the sound effects and phrases from the Star Wars movies right in the palms of their hands! Wear Force Link wearable technology to activate lights, sounds, and phrases in Force Link-activated figures, accessories, vehicles, and playsets! With Force Link, kids can bring some of their favorite Star Wars adventures to life! When kids wear the included Force Link wearable technology and pick up the included 3.75-inch scale Kylo Ren figure, they can activate authentic sounds and phrases! Kids can imagine sending Kylo Ren into fiery battle with the included Lightsaber accessory, and imagine recreating their favorite scenes and adventures from Star Wars. 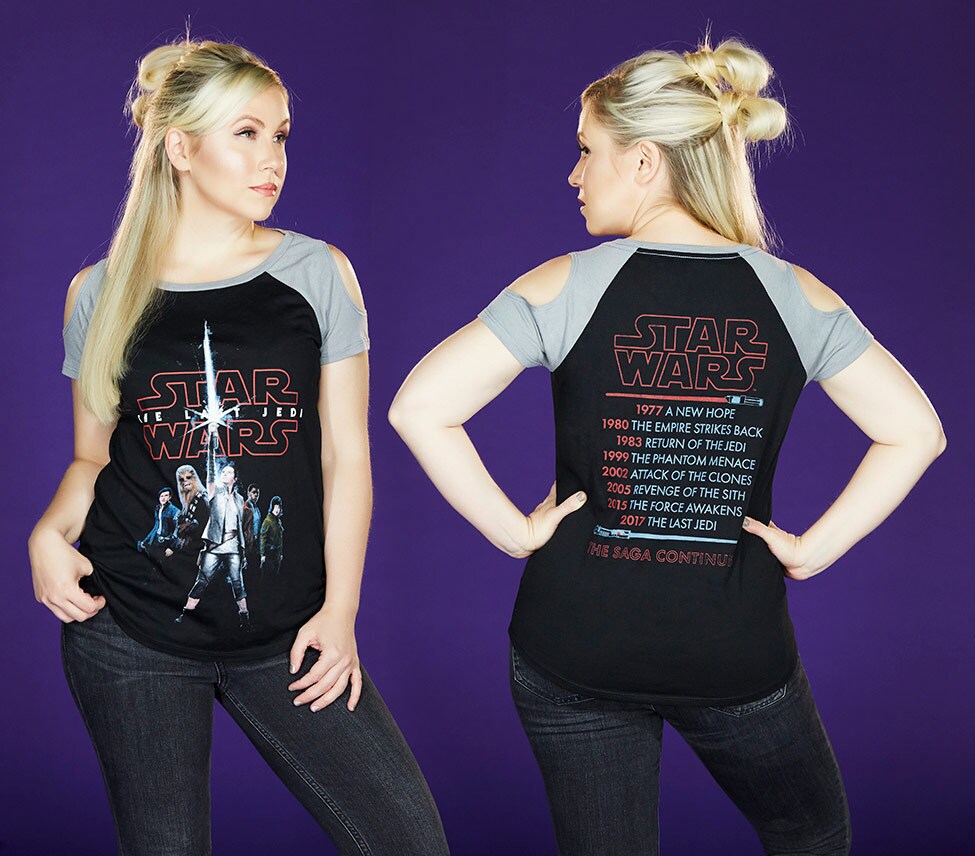 Star Wars: The Last Jedi Tour Tee: Cold shoulder raglan style tee with The Last Jedi artwork on the front and a "tour" style list of each Star Wars film in chronological order on the back.

Star Wars Forces of Destiny May The Force Be With Us Twin/Full Comforter: Features artwork and designs from the hit animated series. 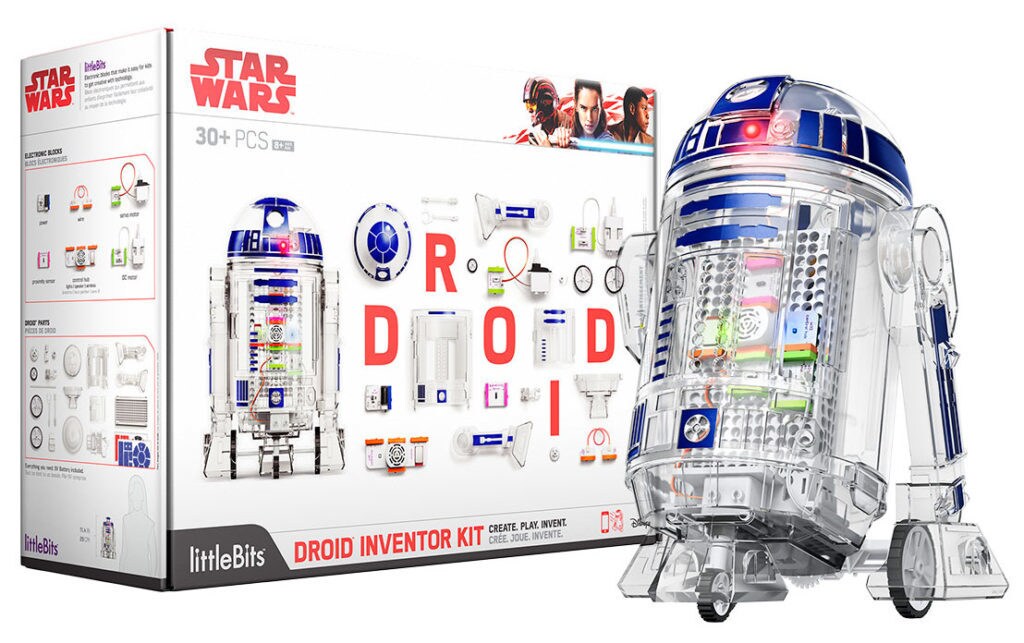 Droid Inventor Kit: Kids can create their own droid and bring it to life using littleBits electronic Bits! With the Droid Inventor app, they’ll give their droid new abilities and take it on 17+ missions. Then they’ll level-up their inventor skills, reconfiguring parts to design any droid they can dream up. 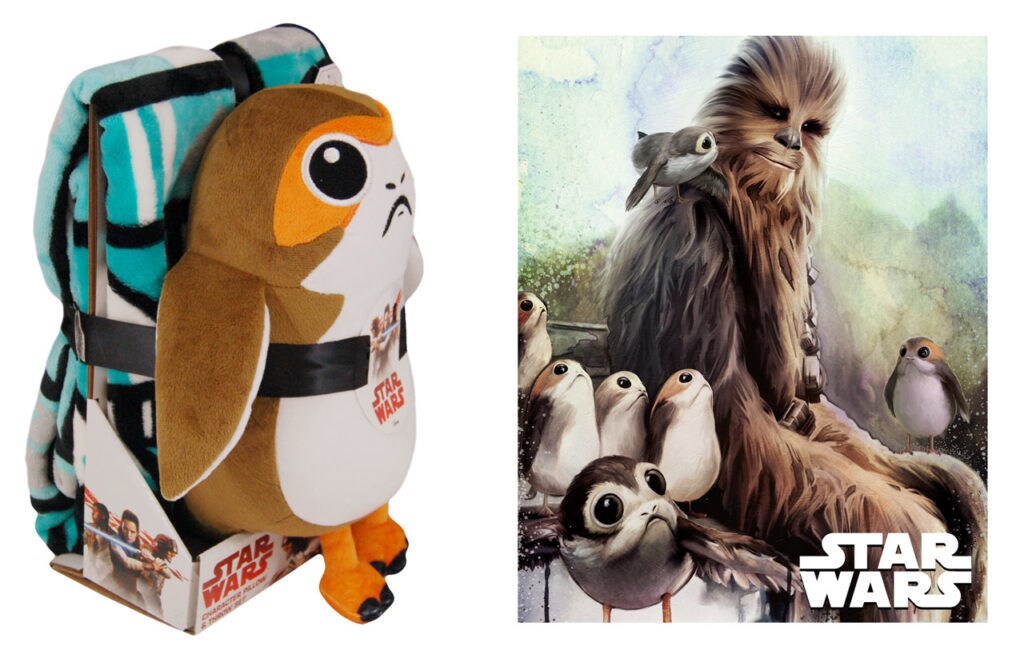 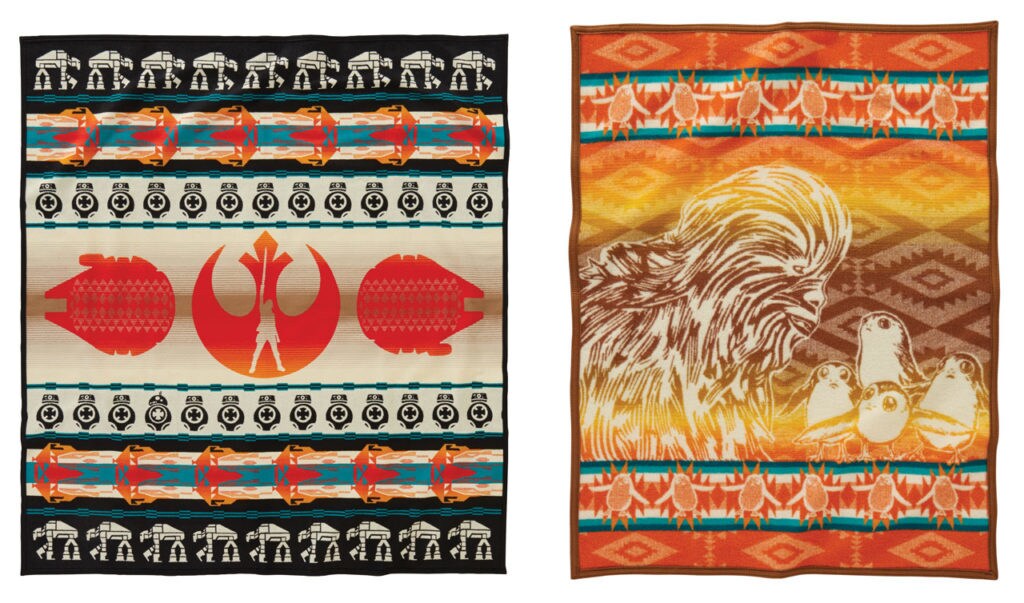 Star Wars: The Last Jedi Blanket: Flanked by the Millennium Falcon, Rey stands at the center, raising her lightsaber in a gesture of defiance against the First Order... This exclusive Pendleton design is available in a hand-numbered edition of 1,977 with a custom Star Wars label and Certificate of Authenticity.

Star Wars A New Alliance Blanket: The perfect gift for your favorite young Padawan: a child-sized blanket featuring Chewbacca and his new friends, the porgs.

Petco strikes again with their The Last Jedi collection of pet toys! There’s vehicles to tug on, BB-9E and the Praetorian Guard to fetch, even a Chewie and porg set to snuggle with!

Star Wars: The Last Jedi Bedding: Make the jump to hyperspace with our a new epic space battle quilt, a sheet set featuring The Last Jedi characters with a fresh color palette with pops of yellow, sweet decorative pillows, and the Millennium Falcon makes a stop in your kids bedroom as a floor pillow! Bedtime has never been more thrilling!

Propel Star Wars Battle Drones: Bring the magic of flight to a whole new dimension with the Propel T64 X-wing starfighter, TIE Advanced X1 and the 74Z Speeder Bike quadcopter. You can fly these drones at top speeds up to 35 miles per hour and engage friends and family in exciting multiplayer battles! Now comes with a companion app. 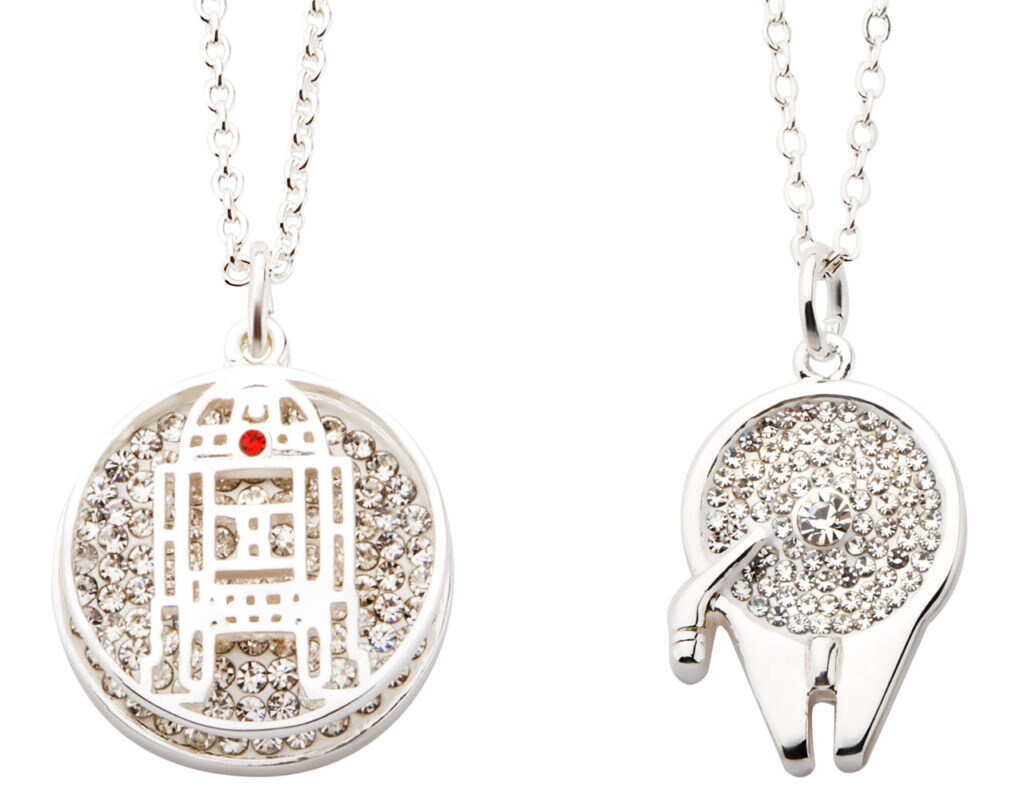 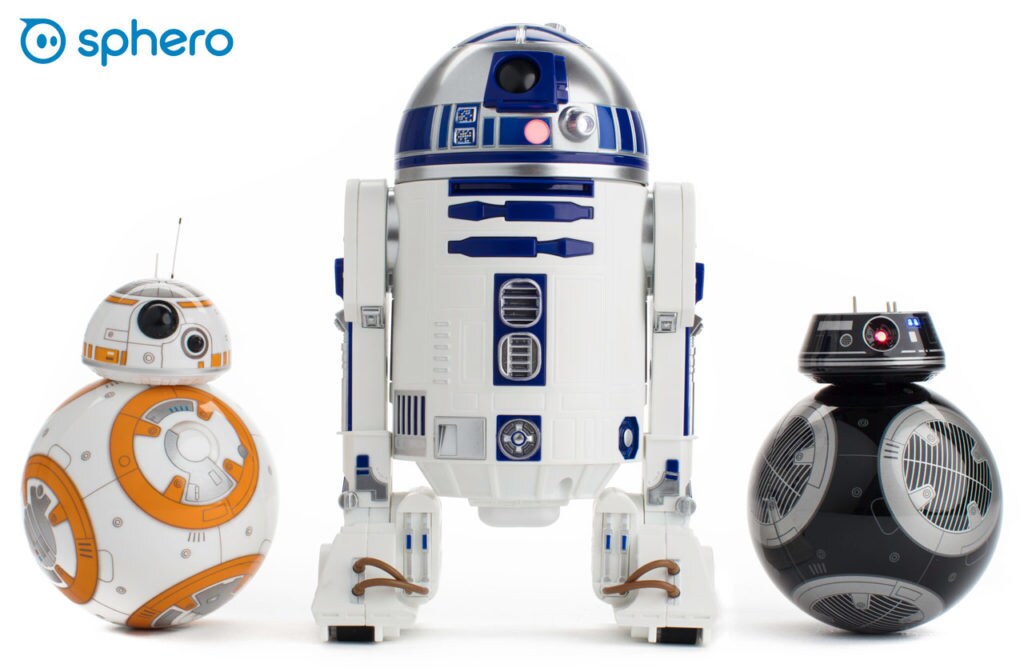 BB-8 App-Enabled Droid, R2-D2 App-Enabled Droid, and BB-9E App-Enabled Droid: BB-8, BB-9E, and R2-D2 are astromech droids from a galaxy far, far away.... Powered by the new Sphero App-Enabled Droids app, drive your droids, send them on patrol together, and more. Roam iconic ship interiors and memorable locations from the Star Wars saga through augmented reality and the Droid Trainer accessory. Each droid has different holographic environments to explore. These droids span decades of adventure from Star Wars saga – iconic R2-D2 is a veteran of the Rebel Alliance, BB-8 is a trusty astromech droid of the Resistance, and BB-9E is the First Order’s rolling menace. The specialized tech in these droids make them unlike any other. Watch them interact together and view films from the Star Wars saga with BB-8, BB-9E, and R2-D2 reacting by your side. Immerse yourself in the Star Wars galaxy. These are the droids you’re looking for.

Hero Droid BB-8: Bring home a beloved and iconic Star Wars character with Hero Droid BB-8! This interactive droid stands at a lifelike scale of 16 inches tall (19 inches with antenna). It moves smoothly and is capable of realistic interactions – just like in the film! Set Hero Droid BB-8 to Follow Me mode and it will roll beside you just as loyally as it would follow Rey or Poe! With voice recognition and remote control capabilities, it is fully interactive and ready to spin into action.