When 900-years-old you reach, look as good as the new Black Series Yoda you will not. Hmmm?

It’s been five years since Hasbro’s Star Wars: The Black Series, the exquisitely detailed and highly-articulated 6-inch line of action figures, first hit store shelves. While the sculpts have largely remained the same, recent advancements in painting technology, inflated after-market pricing, and the exuberance of fans looking to play and display some of the earliest figures in the line has resulted in a special edition: the all-new Archive collection.

Launching in the spring of 2019, today StarWars.com has the first look at the second wave in the greatest hits series that celebrates some of the most sought-after figures, including Anakin Skywalker from Revenge of the Sith, the wrinkled and wise Yoda, and even a biker scout trooper who seems to have fallen victim to a wily Ewok and will debut sans speeder bike.

We recently spoke with Patrick Schneider, senior brand manager, and Steve Evans, design director, to talk about updating some of the earliest Black Series figures, their personal favorites from the latest additions, and why it’s so important to get Yoda’s eyes just right.

Although the line itself is relatively new in the more than 40-year history of Star Wars toys, the Archive collection will take a page from the classic 40th anniversary Black Series collection of last year and release figures on blister cards instead of the standard box packaging. “The blister card is kind of immortal,” Schneider says.

The Archive line has been two years in the making, due in large part to the fans who talk directly to the Hasbro executives on the convention circuit. “We’ve actually been discussing this in one form or another for literally the past two years,” Schneider says. “And it was just based on this idea: Fans would say, ‘It’s great that you’re releasing 4-LOM. I want 4-LOM. But for 4-LOM to make sense, I also need Boba Fett and Bossk and IG-88.” Boba Fett was, after all, the very first Black Series figure to be in fan’s hands with a San Diego Comic-Con exclusive released ahead of the full line in 2013. 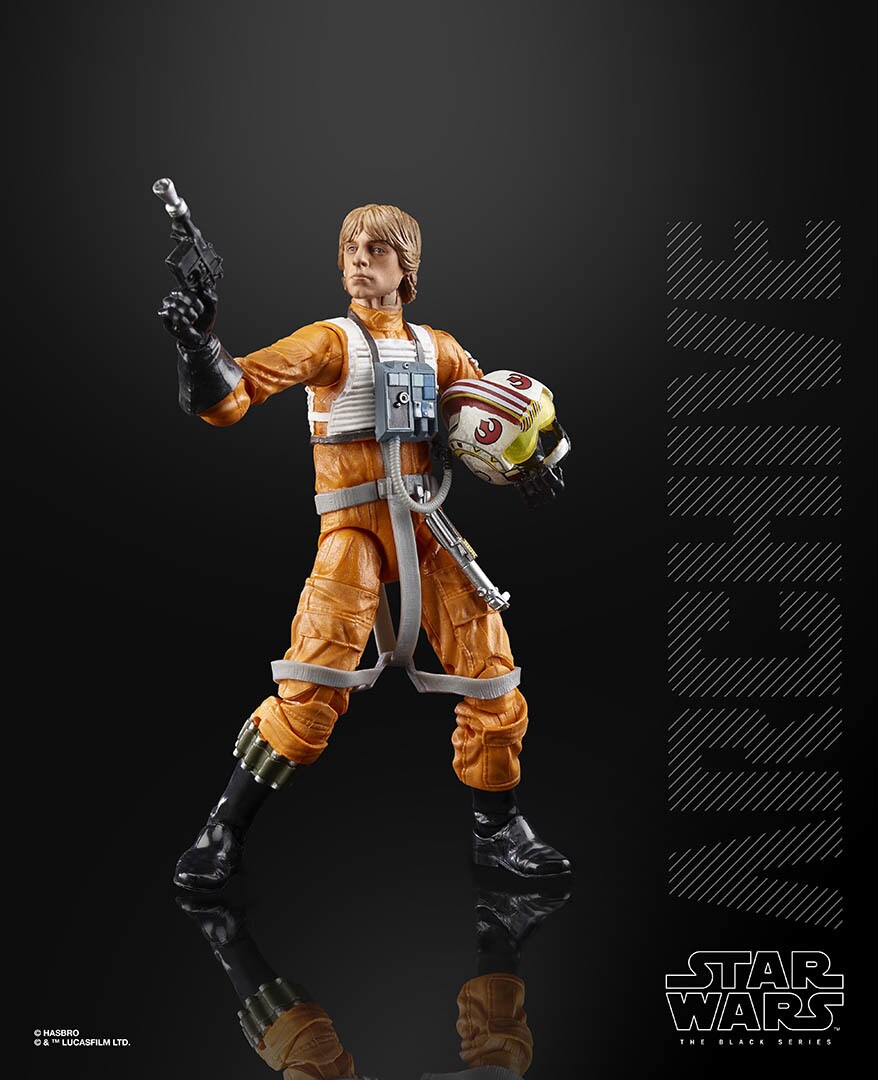 And last year, as more characters from A New Hope joined the Black Series ranks, collectors began clamoring for Luke Skywalker in X-wing gear, the coveted first figure in the original Black Series release. “There’s a reason that we released those figures first,” Schneider says. “And now that we’re five years out from the launch of Black Series, we kind of need to bring them back.”

Beyond fan demands, executives also noticed that the excitement over collecting those figures that were no longer in production was causing the prices to skyrocket on third-party sites. “The after-market prices were crazy,” Schneider says. “These [normally $20] figures are selling for over $100.”

They knew they had to respond to the demand by supplying store shelves, but they didn’t want to devalue the earlier versions either. “We wanted to do two things: we want to bring new collectors into the Black Series and we want to respect and be honest with the collectors we already have,” Evans says. “We didn’t want to devalue the collections people have spent a lot of time and a lot of effort and a lot of money on…on an emotional level, let alone a business level.”

By packing the Archive line on the blaster cards, shown for the first time at New York Comic Con, the newer figures are set apart from their predecessors at a glance.

The newer versions also benefit from newer Photo Real technology that has made recent figures look even more like tiny plastic doppelgängers to their on-screen counterparts.

“The figures themselves are essentially the same,” Evans says. “We’re using the same molds and using the same kind of tooling.” But the newer paint application process adds depth and nuance to facial features, bringing new life to the older figures. “Yoda in particular is a perfect example of where Photo Real really comes into play,” Evans says, noting the figure is his personal favorite from the new line. “I wasn’t satisfied with the deco previously. It’s Yoda! You have to deliver Yoda really well…. When you look at the puppet or the CG character, there’s a lot more soul in those eyes. I think with Photo Real we can take those images and apply them directly onto the sculpt and therefore give a much more sophisticated palette for the eyes, which as everyone knows are the windows to the soul. For Yoda, that’s really, really important.”

The new paint also adds a depth to the shading, especially in the crinkles and wrinkles of the wise Jedi Master’s nearly 900-year-old face. “We can really get a very expressive and emotional image on that figure, far and above how we did it originally the first time around,” Evans says.

Revenge of the Sith

Schneider favors Anakin Skywalker, complete with two interchangeable heads to symbolize the moment he ceases to be Luke’s father and becomes an instrument of evil. “Obviously we’ve all been fans of Star Wars, just seeing how Joseph Campbell’s hero’s journey was really Anakin’s’ journey throughout all six movies. So just the fact that it is Anakin’s story and that figure is really that pivotal moment….I think just that pivotal moment of his fall, that just gives me shivers.”

The Photo Real technology gives designers more control over the range of shading while printing onto Anakin’s face, adding both sharper detail and a more chilling effect. “This one allows a lot more shading so you can shade around the eyes, especially on Anakin,” Evans adds. “If you look at when he’s got his Darth Vader/Sith expression, we can get a bit more red around the eyes and get a subtle gradient away from red into the skin tone. Yoda can benefit from having a darker green or sort of a brown in amongst the creases and folds to just make it pop.”

The deco was inspired in part by fan artists who painstakingly repainted their Black Series figures with minuscule detail and posted the results on Instagram and other social media sites.  “The artists that we see take our existing figures and paint them are amazing,” Evans says. “And literally within the studio, we put up a load of those pictures from these artists that do this and the challenge to the team was, how do we replicate that? How do we give that to our collector without handpainting every single one?” he asks. “That is the essential very simple but very difficult challenge to the team.”

By bringing out the nuances of the sculpted features, Evans hopes the new figures pay respect to the sculptors and designers, “because they do such an incredible job.”

And rereleasing some of the hard-to-find figures gives the next generation of collectors the chance to get their hands on figures they’ve been coveting for year to complete a collection or even just get a spare. “One in pack, one out of pack, and one just in case,” Schneider jokes.

“The idea of generations for Star Wars is obviously intrinsic to the story itself, it’s intrinsic to the sequel trilogies and it’s noticeable in our collectors,” he adds. “It was really important to get these figures back out to them.”

Of the more than 160 Black Series figures already released or announced, Evans says the Archive line will be limited to a select few, with just seven being released in 2019. “We want to make sure that we only bring back the figures that are really wanted, really needed and will benefit from this,” he says.

As for picking the next round to join the elite “best of” collection? The team at Hasbro will just have to trust their instincts. “It’s definitely more of an art rather than a science, I would say,” Schneider adds.

Check out this story and more on The Star Wars Show below!


Associate Editor Kristin Baver is a writer and all-around sci-fi nerd who always has just one more question in an inexhaustible list of curiosities. Sometimes she blurts out “It’s a trap!” even when it’s not. Do you know a fan who’s most impressive? Hop on Twitter and tell @KristinBaver all about them!
Hasbro Toys Action Figures star wars toys Star Wars: The Black Series Photo Real SWS