Creature Feature: 5 Truths You Might Not Know About Bor Gullet

Now, the tentacles are turned: you will know the secrets of Saw Gerrera's lie-detecting creature.

Creature Feature explores the ins and outs of monsters and beasts in the Star Wars universe.

"Bor Gullet will know the truth."

Rogue One: A Star Wars Story is the first Star Wars standalone, but it continued the grand tradition of introducing different and imaginative creatures to the universe. I'm talking about Bor Gullet. Saw Gerrera kept the octopus-like blob on hand for interrogations. If you're an extremist like Saw, a creature such as Bor Gullet is ideal for keeping paranoia at bay. Why wonder whether someone's being honest when you can take a trip inside that person's mind instead?

Saw explained Bor Gullet can feel thoughts; he told Bodhi, "No lie is safe." Of course, gaining information comes at a price: the person who finds him/herself in the Bor Gullet's grasp is likely to lose his mind. It's risky, and I don't know about you, but I didn't get the impression Saw used Bor Gullet sparingly. We haven't learned a ton about the creature yet, but here are five facts we do know about Bor Gullet:


1. Bor Gullet always had a purpose.

Bor Gullet delved into Bodhi's mind for answers, but initially it was invented to get inside Jyn's head. Writer Chris Weitz explained in The Art of Rogue One: A Star Wars Story, "He's an empath; he can understand exactly what you're thinking, but he also feeds off emotions." Bor Gullet's not limited to only enjoying sadness or negative feelings; he likes joy, too. Weitz found the "weird metaphysical, psychological" aspects of the creature intriguing.

2. Behind the scenes, everyone loved the creepy concept.

They decided on an octopod look for the creature because, as Weitz said, "... tentacles could go around people's necks and heads and into their ears." Eww. Special creature effects supervisor Neal Scanlan's team was excited by the monstrous nature of the creature and jumped into the design. At first, the character was envisioned as having limited mobility, but that idea didn't stick.

Scanlan said, "Bor Gullet was designed in a moment of inspiration." Creature concept designer and senior sculptor Ivan Manzella had an image in his head as soon as director Gareth Edwards described Bor Gullet. Manzella put the image he saw down on paper, and though it was abstract, Scanlan said, "It was all there from the start." 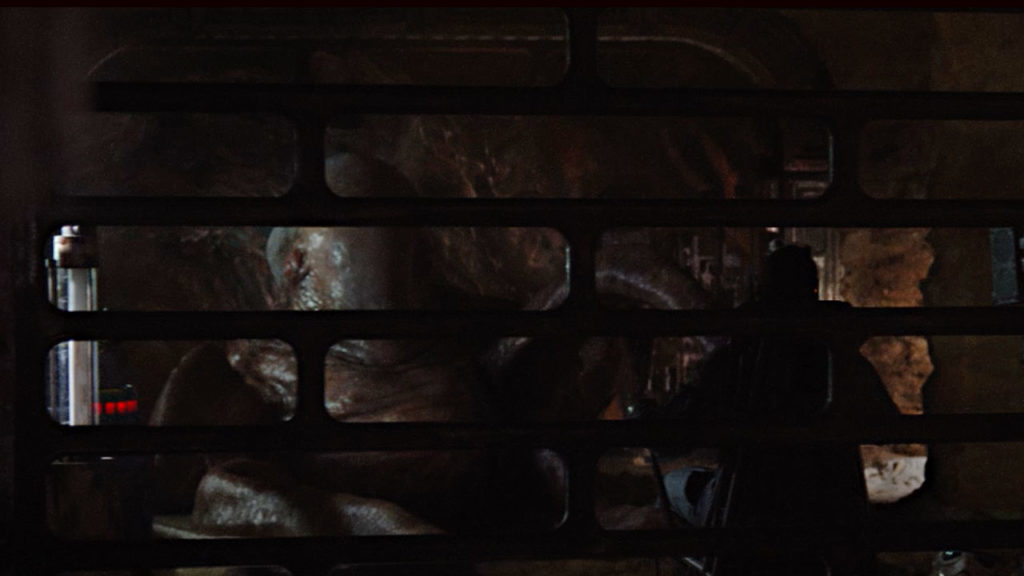 4. The creature is a mix of practical and CG effects.

Like pretty much all designs, Bor Gullet went through changes. ILM animation supervisor Hal Hickel told Art of VFX that Bor Gullet was initially going to be a mostly practical creation. It started as an animatronic and they planned to add a single digital tentacle. However, Hickel said, "Then the scene changed quite a bit, and we needed the ability to move him, and to have much larger, and more extensive tentacles. Our London studio, under VFX supervisor Mohen Leo, and animation lead Gang Trinh, added movement to the body, and grafted on large tentacles that helped Bor Gullet pull itself forward, and also restrained and 'interrogated' Bodhi Rook. He ended up being a really great mix of Neal Scanlan’s practical work, and ILM’s CG work."

5. Bor Gullet's sounds come from many things -- including a yoga mat.

Every Star Wars film contributes new sound effects to the library, and Rogue One delivered them in spades. Sound editor Christopher Scarabosio told StarWars.com about coming up with the creature's sound: "Bor Gullet can read minds, so it was an intelligent creature. Sea mammals are intelligent creatures and have an interesting communication sound, so I started there. I wanted there to be some degree of menace, but only to get less resistance from its victim. The finished vocalization was a combination of pitched down Beluga whale and Orca recordings, with a touch of dolphin. There is also some walrus chuffs for the low-frequency element. The other feature of Bor Gullet was its tentacles. That is a combination of pitched down squid movement, a yoga mat, and suction cups."

Now that you know a bit about Bor Gullet, check out 6 things you might not know about wampas!

Sources: The Art of Rogue One: A Star Wars Story; Art of VFX