Creature Feature: 8 Things You Might Not Know About the Dianoga

With Halloween closing in, we look back at one of Star Wars' first creatures.

Creature Feature explores the ins and outs of monsters and beasts in the Star Wars universe, from in-universe facts to behind-the-scenes secrets. While you’ll learn a lot here, we still suggest caution when checking out meteorites on ice planets or landing on large asteroids.

It's not a pleasant day when you find yourself wading in a putrid pool filled with garbage. Your situation is even worse if you're on the run from trigger happy stormtroopers, aboard a massive space station/weapon, and the walls around said pool of garbage are starting to close in on you. This is one of the best examples of a "things can't get any worse, right?" situations in Star Wars. But it did get worse for Luke. The sneaky dianoga attacked and almost pulled the Tatooine farm boy under the murky liquid in the Death Star garbage masher.

The dianoga's screen time was brief, but the creepy creature and its eyestalk have not been forgotten. With Halloween right around the corner, we thought it time to spotlight one of the first creatures seen in Star Wars. Here are eight things you might not know about dianogas, both in-universe and behind the scenes:

1. Dianogas are a delicious delicacy.

Dianoga is a species of squid, and I don't know about you, but that makes me think of calamari. As it turns out, dianogas could indeed be cooked and served to humans. In "A Recipe for Death" from Landry Q. Walker's Tales From a Galaxy Far, Far Away Volume I: Aliens, a chef turns a dianoga into a breakfast dish. Meat from the upper back of dianogas are apparently flavorful but have to be cooked carefully as to not activate the blood parasites in the fatty tissue. I'm not sure that's a risk worth taking.

2. For sound, there was a devilish inspiration.

Music initially played a part in the dianoga sequence, but George Lucas decided to eliminate the score. Removing the music let the creature's noises and movement in the water be heard, and that gave the scenes a more ominous tone. Sound designer Ben Burtt turned to The Exorcist's devil for inspiration for the dianoga's on screen moans. "I ring modulated some vocals and added echo because the trash masher was a hollow metal chamber," Burtt said in The Sounds of Star Wars. Ring modulation usually sounds sort of robotic; a ring modulator takes two signals and multiples them to create two new frequencies.

The dianoga appeared in the Death Star's trash because it was one of the places on the ship where it could feel like it was at home. According to The Ultimate Star Wars, the creatures like to make their way into the bilges of starships and stow away in the garbage. At an average size of 23 feet long, it's amazing they don't get noticed.

A dianoga puppet used for second unit filming at ILM recently went on the auction block. It was accompanied by details on the materials used in construction: A puppeteering rod allowed the creature to be turned from side to side so it could look around the trash compactor. The dianoga was made from latex over foam and featured hand-punched hair and a mechanism that allowed it to blink.

One day during the filming of A New Hope, Mark Hamill noticed that Lucas looked a little blue. They were working on the trash compactor scene, and Hamill was waiting for everything to be set up for another take -- another take meaning a scuba diver was going to play the part of the dianoga and pull him under the water -- when he caught Lucas' eye and tried to cheer him up. In a story recounted at Star Wars Weekends, Hamill said, "I hadn't planned this, it was just out of desperation that this idea came into my head what with the monster being called a dianoga and everything. I picked up one of the little bits of green pieces of styrofoam floating on the water and, to the tune of 'Chattanooga Choo Choo,' I started to sing, 'Pardon me, George, could this be dianoga poo-poo?'" He said Lucas responded by putting his foot on Hamill's chest and pushing him into the water.

6. It was in it from the beginning.

The dianoga was a fearsome creature in early drafts of Star Wars. Called the Dai Noga and Dia Nogu, the vicious beast appeared in varying locations -- once in the bowels of Alderaan. The Dia Noga eventually found its way to an underground dungeon in the Death Star before getting put in the garbage masher. 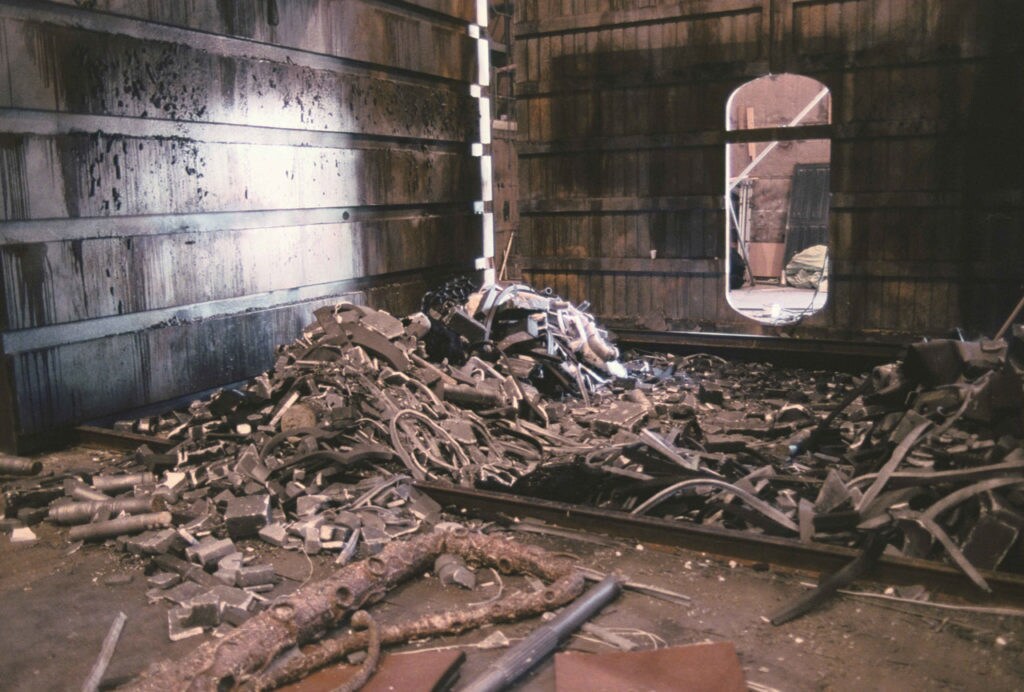 7. The dianoga was eventually downplayed.

Lucas scaled down the part the dianoga would play. Special production and mechanical effects supervisor John Stears said they crafted a bigger monster but only used the tentacle as Lucas decided to combine the original, bigger dianoga encounter with the trash compactor scene. That meant Stears' monster got cut down from a full body to a single tentacle. The iconic head was added in the eleventh hour. Phil Tippett and Jon Berg sculpted the dianoga's eyestalk as fast as they could and filmed it on a stage at ILM. The debris in their model puddle of garbage included pieces from the exploded Death Star and X-wings.

The dianoga on the Death Star was a female named Omi, captured from her home and brought to the Death Star. During her first attempt at escaping her new home, Omi killed a couple of stormtroopers and was eventually moved from her enclosed space into the trash compactor, where she memorized the routine of the closing walls and found a safe place to hide.

What do you think of the dianoga? Let us know in the comments below!