Creature Feature: 7 Things You Might Not Know About Nightwatcher Worms

Creature Feature explores the ins and outs of monsters and beasts in the Star Wars universe, from in-universe facts to behind-the-scenes secrets. While you’ll learn a lot here, we still suggest caution when checking out meteorites on ice planets or landing on large asteroids.

For a somewhat desolate planet, Jakku has a lot happening on its scalding surface. Life has found a way in the form of humanoid residents and creatures such as happabores, steelpeckers, and nightwatcher worms. The latter, also known as sandborers or Arconan night terrors, roam beneath the sand in search of sustenance. The nightwatcher's head stalk with threatening-looking red eyes first appeared in The Force Awakens; recently, Forces of Destiny showed us the mass of the full worm hiding out of view.

From the design to the creature's hunting tendencies, here are seven things you might not know about the nightwatcher worm -- with exclusive insights from Brad Rau, Forces of Destiny director. 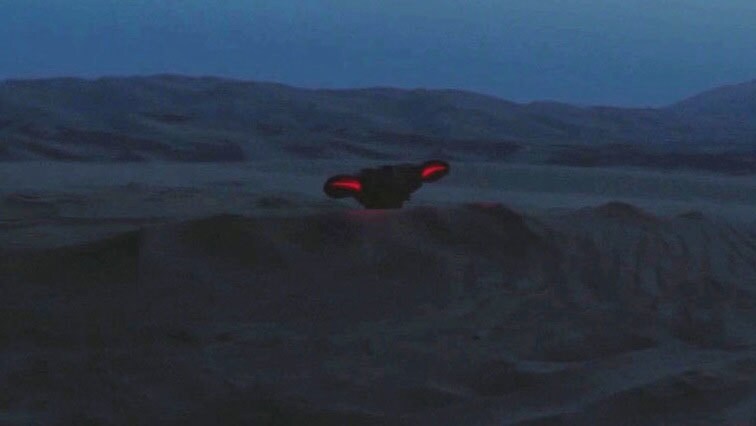 Only the head stalk of the nightwatcher worm appears in The Force Awakens -- though at one point the worm was going to be responsible for swallowing Poe and Finn's stolen TIE fighter in the Sinking Fields -- so they needed a simple solution. Creature effects creative supervisor Neal Scanlan talked about the creation of the nightwatcher worm fabrication at The Creatures, Droids and Aliens of Star Wars: The Force Awakens panel at Celebration Europe in 2016. The worm's head stalk was essentially a hand puppet that Scanlan operated from underneath the sand. Creature concept designer Ivan Manzella constructed the worm puppet over the span of a single lunch period for about 50 quid. 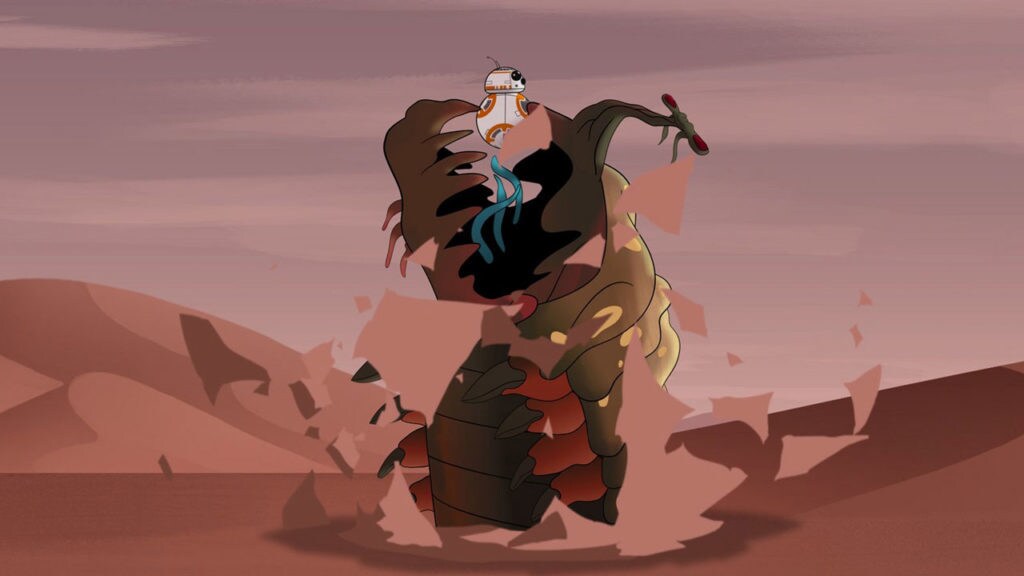 Forces of Destiny revealed the nightwatcher worm's complete, gigantic form, so Ghostbot animation studio, the animators of the shorts, was tasked with designing the rest of the unique creature -- it's much bigger than the head stalk we saw in The Force Awakens! We know from Rey's Survival Guide the worms could measure around 20 meters long, with some specimens growing much larger.

Ghostbot co-founder and Forces of Destiny director Brad Rau tells StarWars.com they worked with Dave Filoni to find a look for the nightwatcher: "Filoni wanted it to appear as though it could believably survive the harsh desert environment of Jakku, and at the same time feel true to the diverse creature aesthetic of the Star Wars universe. And of course, it needed to match the cool eye stalk design from The Force Awakens. Since the worm eats junk and metal, it needed to have huge teeth. Also, it needed to have a big enough mouth to eat a speeder bike and yet a small enough mouth that Rey could use her staff to pry its maw open."

3. Slugs and bugs were research.

To give the nightwatcher worm a memorable look, Rau teamed up with Ghostbot co-founders Alan Lau and Roque Ballesteros to research possibilities for the design. Ballesteros took point on the project, which is especially amusing because Rau said Ballesteros has a serious phobia of slugs, snails, and worms. "We talked about balancing existing Star Wars creature motifs with real-world creepy crawlies. Roque found some appropriately gross reference for a variety of worms and slugs, microscopic photography of bugs, like the infamous water bear, and combined those with a close eye on lots of creature designs by Ralph McQuarrie and Terryl Whitlatch," Rau explains.

With the design complete, the animation director was tasked with making the worm move. "In the animation phase of the project, our animation director Tatyana Drewry Carvin worked hard to balance the worm's weight and mass with his ability to move under and through the sand," Rau says. "He's pretty quick for his size, like a gigantic sand shark. We referenced a lot of footage of the sandworms in Dune. Because they are awesome." 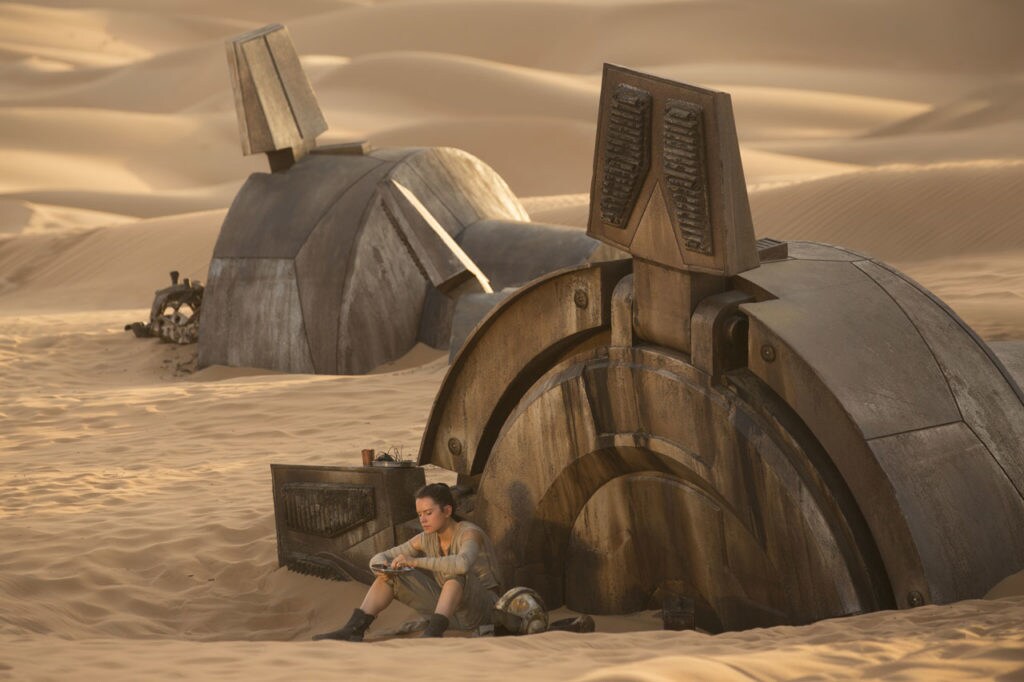 Living and thriving on Jakku means being resourceful and maximizing the use of the limited flora and fauna on the desert planet. Case in point: artists use shed nightwatcher worm casings for practical purposes. Rey has a lamp made from such casings in her improvised AT-AT home, and it was made by an artisan in Tuanul village.

The nightwatcher worms uttered the same sound/word in both The Force Awakens and Forces of Destiny: "Kojima." 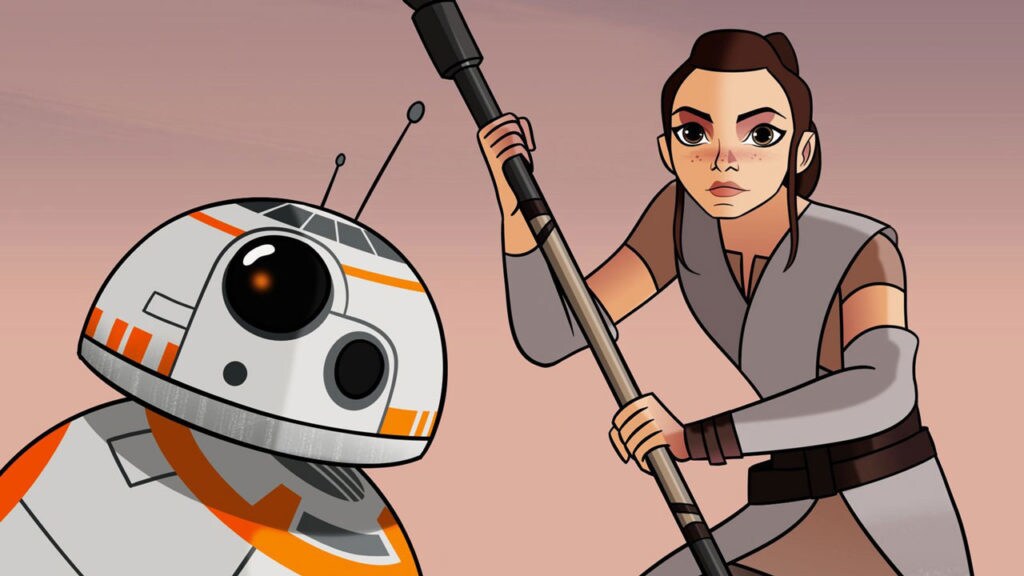 Like every other creature and being on the planet, nightwatcher worms are focused on getting by, surviving on junk and scrap metal. They have mouthparts capable of processing metal and making it into scrap. If the pieces don't get sufficiently broken down through the mouth, the worm's stomach can generate acid to dissolve everything else. Word has it nightwatcher worms hunt by sensing vibrations in the sand above them.

In Forces of Destiny, the worm was depicted as hungry rather than malicious. "In 'Sands of Jakku' and 'BB-8 Bandits,' we treated him like a big dog just looking for a bite to eat," Rau says. He goes on to add that, in the shorts, the worm really appreciates when Rey takes a moment to feed him valuable scrap metal.