StarWars.com looks at highlights from Darth Vader #22, previews this week's comics, and examines how the Han Solo series is capturing our favorite smuggler.

It’s Wednesday, and that can only mean one thing: new comics! As such, Comic Book Galaxy returns to look at everything happening in the comic-book world of Star Wars. This week, we run down the highlights of Darth Vader #22, jump to lightspeed for a preview of Han Solo #2 and Poe Dameron #4, and examine how Marvel's Han Solo #1 gave us a great Han Solo. 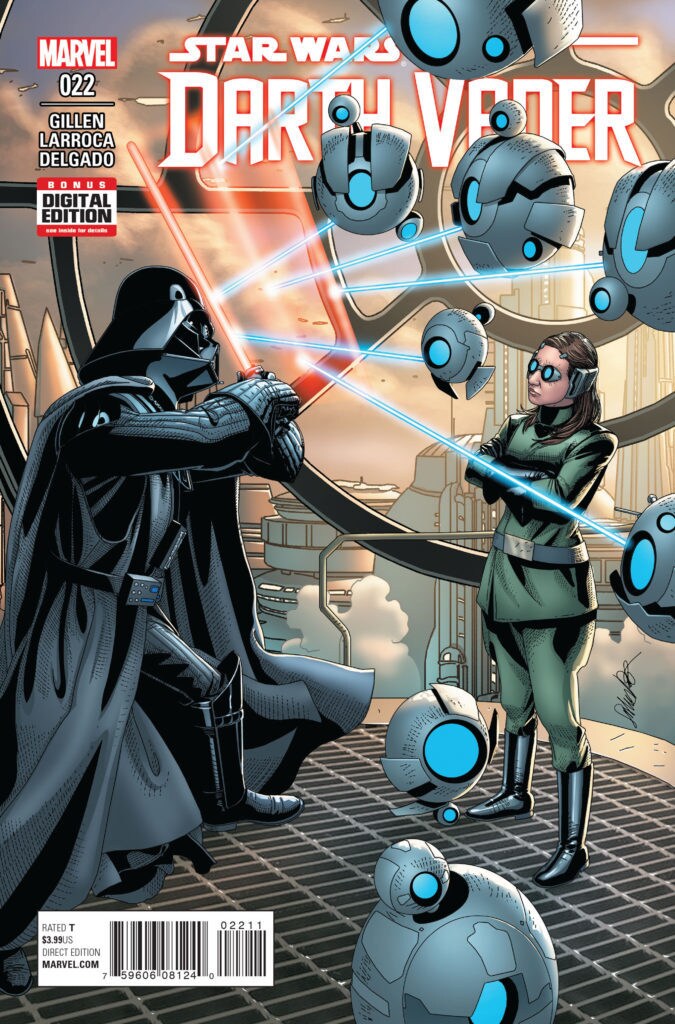 Han Solo #2
This week features the return of the latest Star Wars miniseries, Han Solo, with #2. Issue #1 gave us Solo’s recruitment via a certain Alderaanian princess; she asks him to participate in the Dragon Void Run, a dangerous intergalactic race, in the hopes of rescuing three surviving Rebel operatives (their colleagues have all been murdered). Solo not only wants to retrieve the operatives, but win the race as well, especially since the best pilots in the galaxy are participants; to make things even more enticing for Han, his racing peers doubt a smuggler could win. This may prove to be difficult for everyone, however, as he and Chewbacca come out of hyperspace to find that the racers are under attack. Here goes nothing...

Poe Dameron #4
Poe and Black Squadron continue their mission to find Lor San Tekka while evading Agent Terex and the First Order. After a harrowing escape that featured the wit and fighting prowess of Poe, as well as a larger than life battle between two Zillo Beast-sized creatures, Poe and Black Squadron head to Megalox prison as they get closer and closer to the whereabouts of the legendary explorer. Grakkus the Hutt awaits them, and it’s unlikely he’ll be any more gracious to Poe than he was to Luke Skywalker in the pages of Star Wars.

One of the challenges facing any Star Wars creator is capturing the voice and overall character of the saga's big-screen icons. In a comic book scene, without the benefit of an actor’s performance, it comes down to one panel of art. Maybe two or three word balloons. And that’s it. No music, no vocal inflection or affectation, and no changing facial expressions. It can make presenting an authentic voice a real trick.

Perhaps this is why the new Han Solo mini-series by Marjorie Liu and Mark Brooks has created a buzz among many comic book readers. Liu and Brooks have crafted a quintessential Han Solo that is every bit as snarky, arrogant, and strident as Harrison Ford on screen. In the premiere issue, Liu and Brooks present scenarios and moments for Han Solo to be the scoundrel we know and love. It’s not just about these situations, however, but how the character of Han Solo is present in these moments. His posture and bemused expression when he’s talking with Leia’s messengers, and his strut as he meets the other racers, could come from no one else but Han Solo. When Han says, “No one pilots the Falcon but me and Chewie,” it’s easy to hear Ford’s cadence.

Brooks even draws Ford’s famous finger point when Solo is trying to punctuate a moment. Think back to The Empire Strikes Back, when C-3PO is trying to tell Han that the hyperdrive is deactivated: Solo raises his pointer finger to tell the fussy protocol droid to keep his opinions to himself. It also happens in Han Solo #1 when he yells “Gladly!” at Leia, after she demands he leave the Rebel base. It's a combination of Solo's bravado and impatience and even his heart. Liu nails it. But there's lots more great and authentic Solo and Star Wars here.

Han Solo #1 features a skirmish in a cantina-type setting, Han bickering with his future spouse, and showcases the smuggler's I'm-The-Greatest bravado that, when it comes to piloting the Falcon, he can back up. It’s 100% classic Han Solo, and is a kind of greatest hits of the beloved character. If you're looking for genuine Solo, you'll find it in Marvel's series.

What are some essential aspects of Han Solo’s voice? What makes a good Han Solo story, and what are some of your favorites? Let us know in the comments section below!