Often dismissed in favor of flashier craft, these vessels deserve another look.

The X-wing. The Imperial Star Destroyer. The AT-AT. The Naboo Royal Starship. The TIE fighter. The speeder bike. And of course, the Millennium Falcon. Nearly all Star Wars fans have a favorite spaceship or vehicle that brings a smile to their faces when they see it on the screen. Whether it’s the iconic shape and sound of the craft, or the connections to their favorite characters, these vessels hold a warm place in our hearts. While the ones listed above may get the rancor’s share of the love, there are a lot of other vehicles from the films that are the favorites of some fans, though they may be underappreciated by many. Let’s take a look at some of these gems that could use more time in the spotlight. 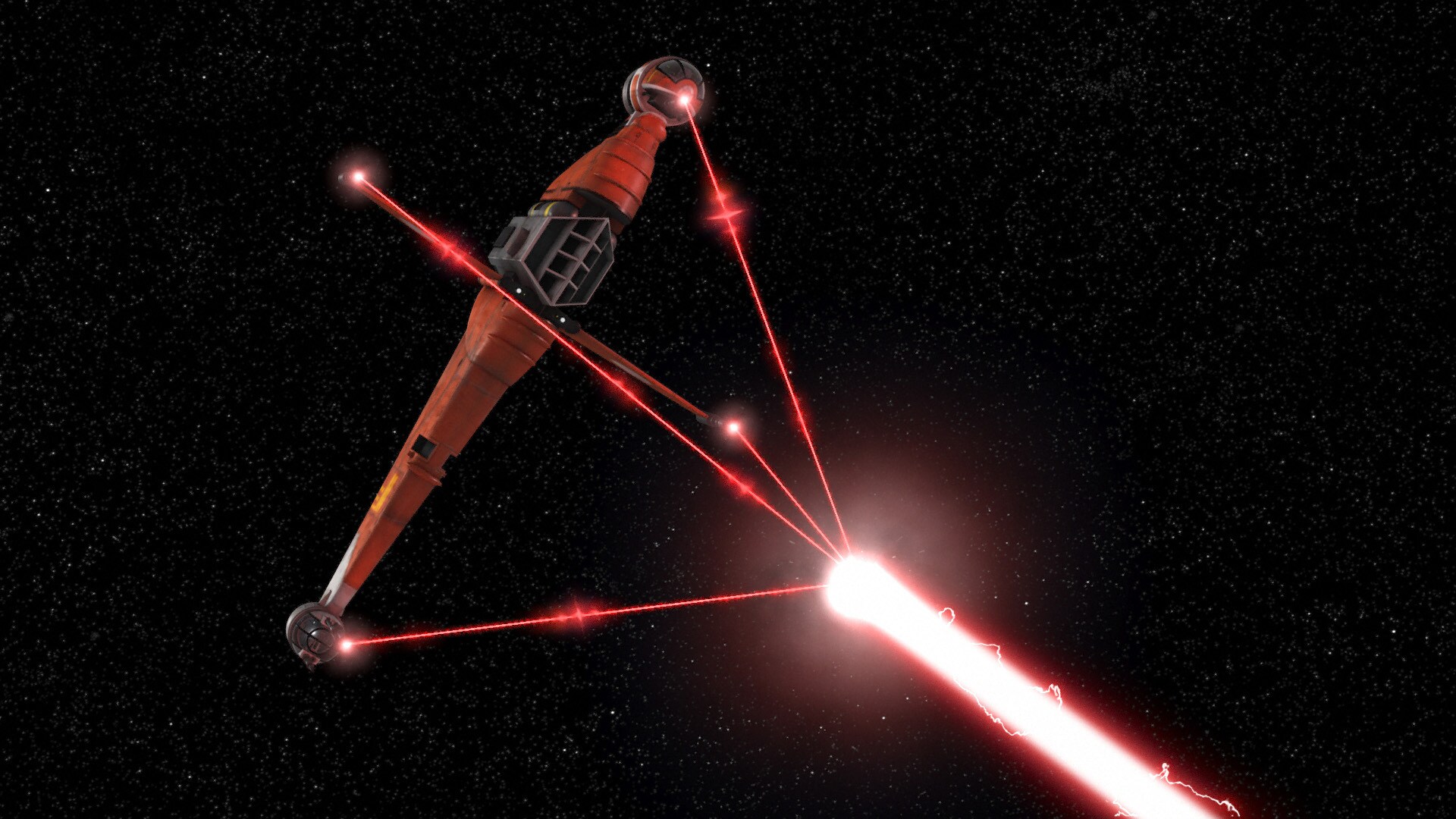 First seen in Star Wars: Return of the Jedi, the B-wing is a heavy fighter and bomber used by the Rebel Alliance. Named for its blade-shaped profile, this fighter packs quite a punch -- its armaments package is normally the amount carried by small capital ships, allowing it to take on larger Imperial vessels, where other starfighters make barely a dent. With laser and ion cannons on its wingtips, and proton torpedo tubes or bomb bays at its center, the B-wing can deal out punishment, though suffers a bit in maneuverability and speed. Its gyroscopic cockpit keeps the pilot from spinning while rolling, helping to keep the pilot focused on its target ahead. As seen in Star Wars Rebels, the B-wing was originally designed by the Mon Calamari shipwright Quarrie in his base on the planet Shantipole, and was first tested by Hera Syndulla before being delivered to the Rebellion and put into manufacturing.

While the nimble, triangular-shaped Delta-7 Jedi Starfighter is great as a weapon for Jedi pilots with their lightning reflexes, the Clone Wars demanded a new generation of fighters with a bit more firepower. Smaller in design than the Delta-7, the Eta-2 Jedi Starfighter answers the call with stronger weapons while not sacrificing the maneuverability that only Force users can truly exploit. Plus the new configuration of cockpit and wings eliminates a blind spot for pilots beneath the ship -- and this cockpit design and feature eventually carried over to the Empire’s TIE fighters. The only real drawback of this ship is the lack of an on-board hyperdrive, requiring the use of a separate hyperdrive-equipped ring, which has to be separated before going into battle. Making their debut in Star Wars: Revenge of the Sith, the Eta-2s are seen being piloted by Obi-Wan Kenobi and Anakin Skywalker during their attempt to rescue Chancellor Palpatine at the Battle of Coruscant.

While TIE fighters and their variants often get all the glory, the First Order relies heavily on their transports to bring ground forces to battle. This transport and landing craft, first appearing in the opening scenes of Star Wars: The Force Awakens, is a beast when it comes to ferrying stormtroopers like FN-2187 into a hot zone. While it has some weapons, its real strength is well, strength -- the First Order needs solid armor to protect its cargo of troops into battle. With a cockpit on top and slightly offset, the design is reminiscent of the Allied landing craft used in D-Day. 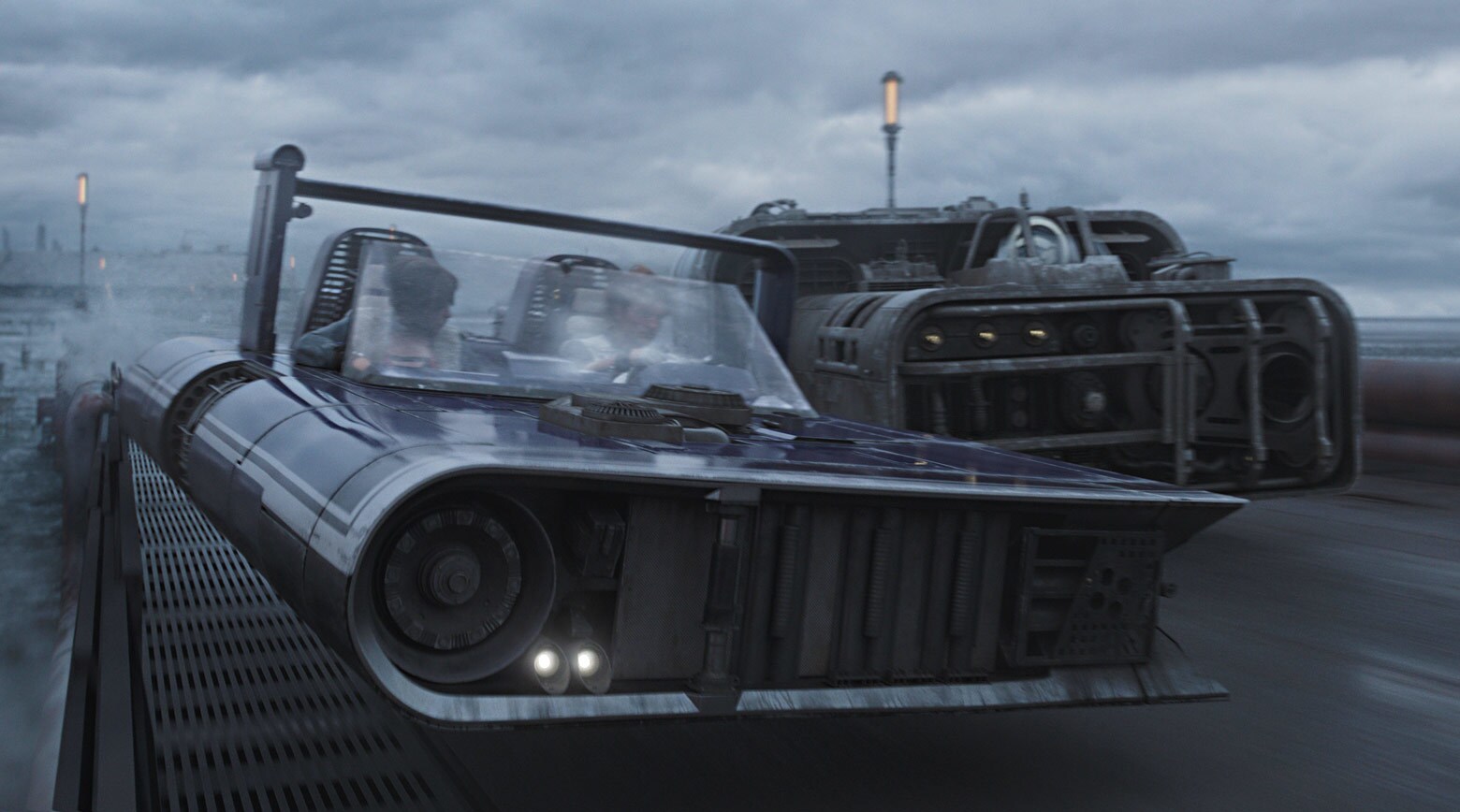 Sure, Luke Skywalker is better known for having a landspeeder, using it to cross the desert sands. But when it comes to city driving, I’d take Han Solo’s speeder any day. Appearing in Solo: A Star Wars Story, the Mobquet M-68 landspeeder is the drag racing muscle car of Corellia, easily souped-up and turned into a racing machine -- its repulsorlifts are customizable and often overcharged by street racers. The particular convertible that Han Solo drove may look a little banged up and asymmetrical but it has it where it counts, maneuverability to get through some tight spots, and the ability to drift -- really handy when being chased by Moloch or by Imperial patrols. Modeled on such cars as the Dodge Charger and Chevy Malibu of the 1960s and 70s, the M-68 is a serious racing enthusiast’s dream. Hang some sabacc dice on the windshield, and you have cool for parsecs.

Switching from the muscle car of the 1970s to the sleek lines of the 1930s, and you have the Naboo N-1 starfighter, epitomizing the Naboo style of combining art with function. First seen in Star Wars: The Phantom Menace, these fighters were the mainstay of Naboo’s planetary defenses, capable in both space and atmosphere. Flown by Bravo Squadron at the Battle of Naboo, and later by Hazard Squadron, these fighters have a symmetrical design with twin engines, twin cannons, twin torpedo launchers, and especially important for Anakin Skywalker, an astromech socket and autopilot. With that bright yellow and chromium color scheme, these fighters really stand out for their beauty that masks their strength in combat.

If the N-1 is the beauty, the U-wing is the beast. This drop ship used by the Rebel Alliance may not be pretty, but if you’re a rebel soldier looking for air support or an evac, it may be the most gorgeous ship on the battlefield. The U-wing, named for the shape that its wings form when hovering or landing, is a heavy hitter, not as agile as a fighter, but superb as a gunship and landing craft, providing cover for its cargo of troopers. It could be flown into combat by a pair of pilots, with gunners operating from open doors to take on targets on the sides. In Rogue One: A Star Wars Story, the gunner Bistan toppled an AT-ACT with his repeating ion blaster from the door of his U-wing. Later, the New Republic used U-wings, including one in Alphabet Squadron piloted by the mysterious Kairos. 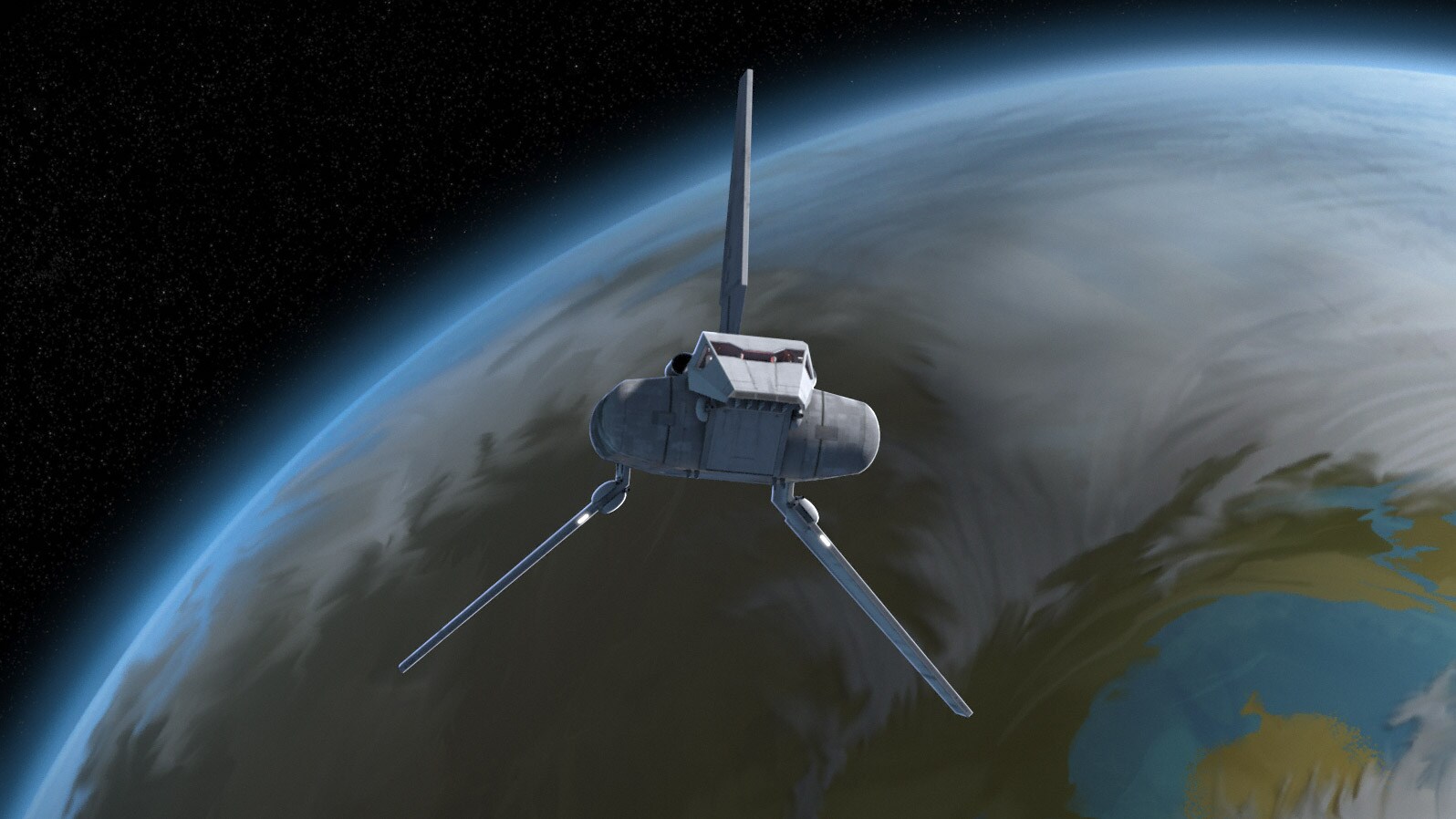 As you can see in this list, landing craft are really vital. While the Lambda-class shuttle is more a favorite for its larger role in Star Wars: Return of the Jedi, the Sentinel-class troop transport was well-used by the Empire, first appearing the Special Edition of Star Wars: A New Hope, and later showing up in Rebels. Able to carry more than just stormtroopers, they can handle larger cargoes including dewbacks -- imagine trying to fit those in a TIE fighter! With a fixed foil above, and two flanking wings that fold out from the sides of the stern, this transport may not get the love of its cousin, the Lambda-class, receives for ferrying Darth Vader and the Emperor, but then again, isn’t a Sentinel-class that is stolen and used by rebels either. 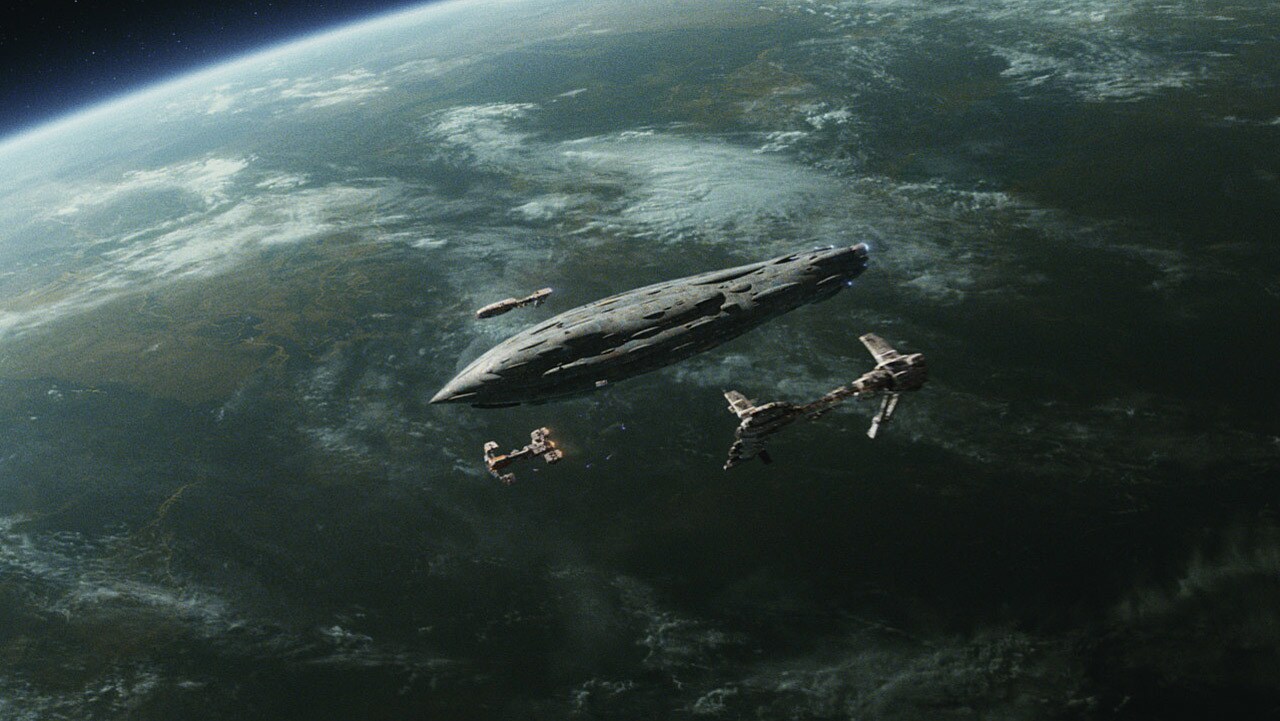 Like its MC80 predecessors, the MC85 is a massive capital ship designed and built by the Mon Calamari. The Raddus, seen in Star Wars: The Last Jedi, serves as the flagship of the Resistance, and boasts both speed and heavy shielding. With dozens of laser cannons, ion cannons, and torpedo launchers, and two launch bays, the MC85 was also a major offensive weapon. With experimental deflector shields helping protect the ship from harm, while its 11 ion drives gave it a boost in sublight speeds, able to evade First Order Star Destroyers during the evacuation of D’Qar. Its sublight speed comes at a cost -- the engines burn through fuel at a great rate, ultimately leading to the need to abandon the ship as when it starts to run on fumes. Even when it outlived its role as flagship, the Raddus left the First Order with a colossal parting shot as Vice Admiral Holdo turned the Raddus into a hyperspace projectile to shatter the gargantuan First Order flagship Supremacy and its fleet of Star Destroyers. While the Raddus was lost, other MC85 star cruisers showed up to help in the Battle of Exegol in Star Wars: The Rise of Skywalker. 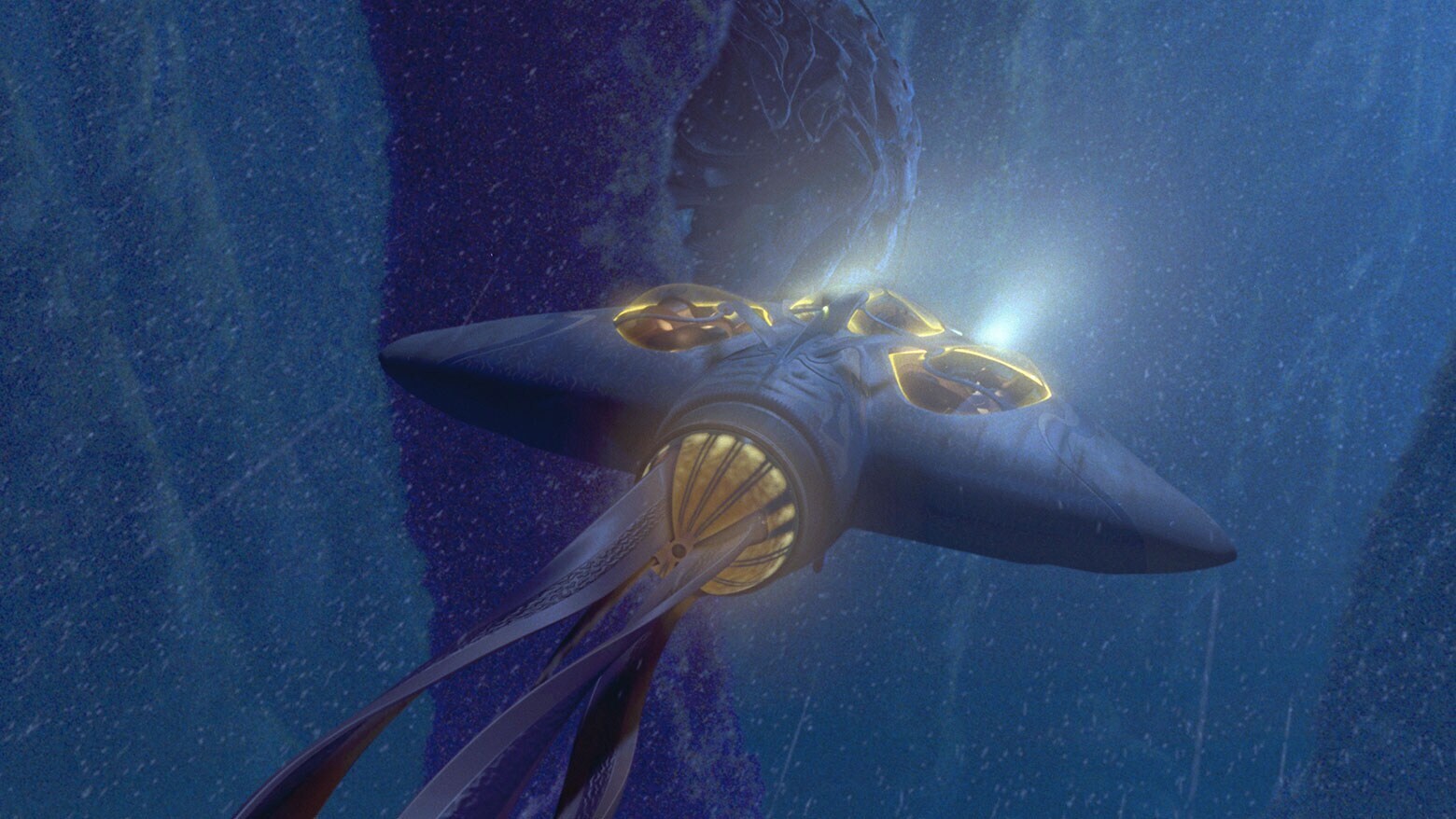 In a film saga takes place on different planets and in space, there’s not a lot of need for transportation underwater -- but when there is, there’s the sturdy bongo. Made by the Gungans using their unique technology, these three-person submersibles are sturdy ships, as evidenced in The Phantom Menace. Not only can a bongo survive crushing depths of the planet Naboo’s core, it can take quite a beating from the mammoth creatures that live in the deep. Despite getting snagged by an opee sea killer’s tongue and then having a bite taken out of it, the bongo carrying Obi-Wan Kenobi, Jar Jar Binks, and Qui-Gon Jinn only suffered a tiny leak and a little power damage, easily fixed with a restart. With a manta ray design using organically grown technology, spiraling turbines, and electrostatic bubble shields, these submarines look more like exotic sea creatures than manufactured vehicles. Capable of high speeds and an ability to travel at any depth, the bongo is one of the galaxy’s ultimate undersea craft -- and another triumph of Gungan innovation.