8 of the Scariest Places in Star Wars

From Mustafar to Dagobah, the galaxy is filled with spooky locales...

The Star Wars galaxy covers a lot of magnificent places, but like the Force, there’s also a dark side. The galaxy far, far away is full of locations where there lies horror beyond imagination. Whether it comes in the form of a haunted house (or ship), lairs of monsters and torment, or the darkest recesses of your mind made manifest, there are plenty of frightening places that are best avoided…or if you have to visit them, maybe go in broad daylight. With plenty of backup. Wookiee backup, preferably. In the spirit of Halloween season, here are some of the scariest places in Star Wars.

Whether it’s the interrogation room aboard the Finalizer where Kylo Ren pries secrets out of his captives, or the chamber in Cloud City where Han Solo is shocked and tortured without questioning, these are truly scary places. There’s even a version of this for mechanicals: the droid workshop in Jabba’s palace is full of torment as EV-9D9 serves up punishment for droids who fail to meet expectations.

When it comes to competitions for spooky, the Nightsisters will usually win the prize -- green gaseous ichor as part of their dark side magic, dark rituals for transforming warriors into monsters, and oh yeah, an army of undead warriors and malevolent spirits. On Dathomir, the underground lair of the Nightsisters is the nexus for all their awe-inducing sinister activities. One part Frankenstein’s laboratory, two parts Temple of Doom, and throw a cemetery in the trees out front, and you’ve got Mother Talzin’s domain as seen in Star Wars: The Clone Wars: where Savage Opress is made and Asajj Ventress is baptized into the clan. Even years after the fall of the Nightsister clan, the lair is still home to evil in Star Wars Rebels, as Maul uses it as his base, learning Nightsister magicks and making a deal with the spirits of the dead Nightsisters, requesting knowledge for him and Ezra at the cost of letting the spirits possess Sabine and Kanan. Only Ezra’s cunning and strength in the Force allow him to save his friends and escape alive.

3. The Sarlacc of the Great Pit of Carkoon

Through Threepio’s translation, Jabba the Hutt described being in the Sarlacc’s belly as “a new definition of pain and suffering as you are slowly digested over a thousand years.” We'll pass, thanks.

We got a glimpse of Darth Vader’s fortress on Mustafar in Rogue One: A Star Wars Story, and it's an imposing, haunting place befitting its owner. Built by Vader above a Sith cave and on the site where a Sith temple once stood, it features a river of lava flowing underneath and cascading out from it, and the tower shape is like a tuning fork for the dark side of the Force. Even Director Krennic found that his experience here left him a little breathless. It's so spooky that it even inspired two Halloween-themes comics series, Star Wars Adventures: Tales from Vader's Castle and its current followup, Return to Vader's Castle. With the dark side so strong and Darth Vader spending his time here, this is truly the old haunted manor of the galaxy far, far away.

On Ahch-To, site of the first Jedi temple, Rey stretches out with the Force and feels all the life on the island, but also senses a place that calls to her -- a dark place underground, cold. Luke slaps her out of the vision because he fears that she isn’t even fighting the call of the dark offering her something she needs. Accessed through a blowhole along the edge of the island, the cave lures Rey with the glimmer of answers and pulls her in, where she would then see a vision relating to her hopes and fears. 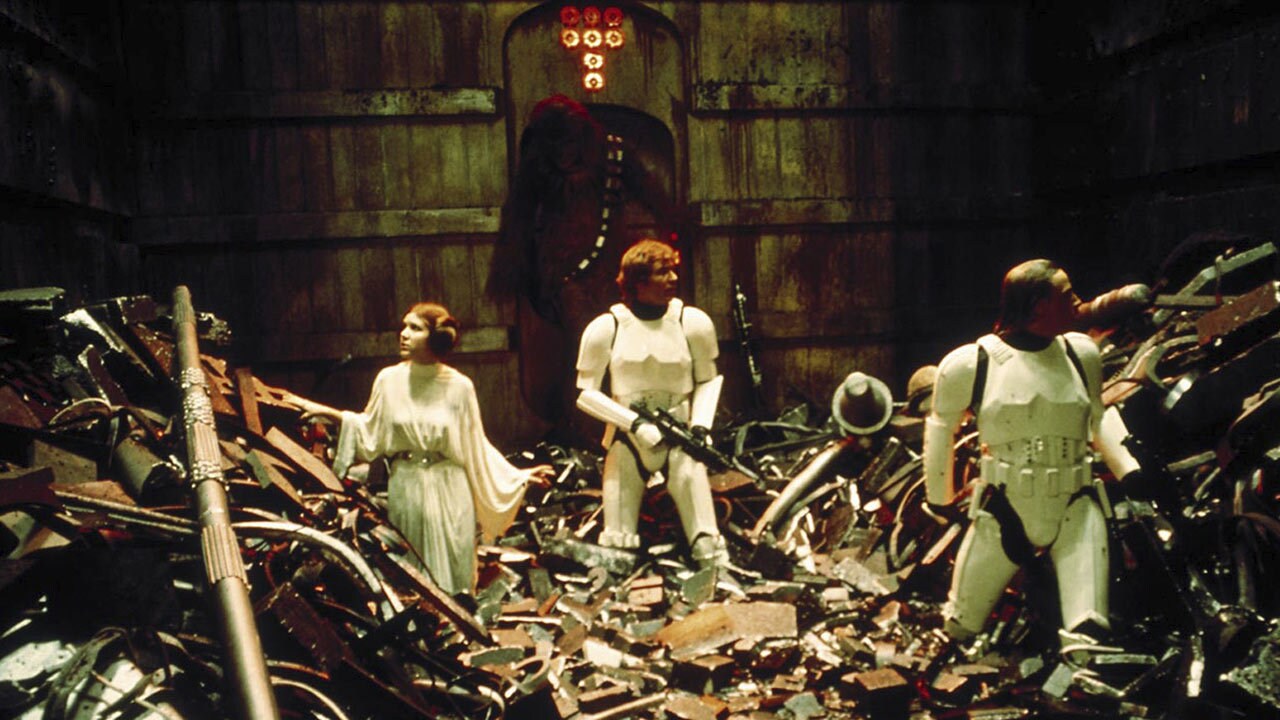 The Death Star trash compactor is a carnival haunted house all in one dimly-lit room. It’s a triple threat of fears: murky water you might drown in, home to a monster you can’t see, and if that doesn’t freak you out enough, the walls can slowly move in, squashing you flat. Also, a bonus level of disgustingness, you’re in a pile of smelly, wet garbage. And there’s no easy way out. The dianoga is easily in the top two of scariest Star Wars monsters and being in its home turf should fill you with an amount of dread -- it could be anywhere, waiting to drag you under as a prized delicacy. But will it be death from the deeps or death from being pancaked or death from your panicky blaster-happy friends and those blaster-proof walls? Best escape room experience ever! 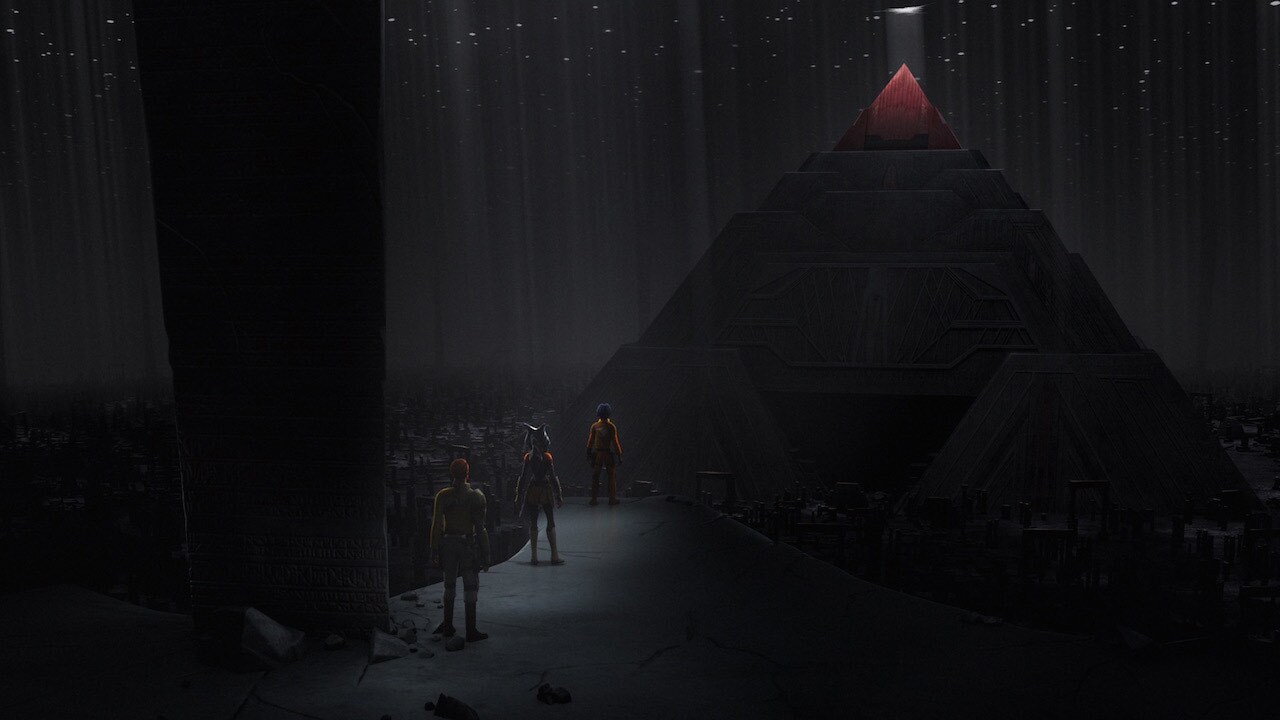 What are some of places we consider scariest here on earth? Places where evil cults hide their secrets and plotted doomsday. Dark spooky caves. A burial ground where a lot of people died and might still haunt. In the galaxy far, far away, the Sith temple on Malachor is a combination of all three -- it’s a giant Sith temple, filled with traps, surrounded by dead warriors who were petrified during the battle here, and it’s in a giant underground cavern. Plus there’s a creepy scary-faced guy who lives here, calling himself “Old Master.” Yup, if there’s a place to dare your friends to stay overnight to prove their bravery, this is it. Luckily for your friends, most of the place was destroyed in the epic showdown between Ahsoka Tano and Darth Vader in the Star Wars Rebels episode "Twilight of the Apprentice." Super creepy!

8. Dark Side Cave on Dagobah

If there’s one place in all of Star Wars that I consider the scariest, it’s the dark side cave on Dagobah. The planet itself is a bit spooky -- not a lot of sunlight, and a lot of swamp with lizards, snakes, and something big enough of slurp up a droid. It’s basically a giant ball of mist, muck, and decay. Now imagine a cave there. Luke feels more than just shivers when he is nearby -- he fells cold and death in the Force, and refuses to leave his weapons behind. When Luke queries Yoda on what lies ahead inside, the sagacious master cryptically answers, “Only what you take with you.” The dark side turns Luke’s worst fears into reality: he is ambushed by Darth Vader, the dark-side monster who killed Ben Kenobi and his father -- but even decapitating Vader in combat is not enough, for the mask explodes to reveal Luke’s own face underneath. Realizing that you might become the enemy (or even that you are already your own worst enemy) is a truth that many of us would not want to discover. Ultimately, Luke’s failure here teaches an important lesson: the only thing he has to fear is fear itself. He goes in with fear, and chooses to battle it, and learns that giving into fear is the path to the dark side. Like the mirror cave on Ahch-To, the cave on Dagobah preys on and amplifies your worst fears. What our minds can make up is far scarier to us than anything the galaxy can spook us with.