Game designer Brandon Scheel will help you succeed in the new game mode, the ultimate test of skill in the galaxy.

You’ve collected characters from across the Star Wars saga and today Galaxy of Heroes is ready to take you on the ultimate showdown. Welcome to the Grand Arena, a new game mode that allows players to battle each other using their entire character collections to prove once and for all who is the best player in the galaxy. Ignite your lightsabers or reach for the good blaster at your side, StarWars.com recently spoke to Brandon Scheel, a designer on the mobile game, to get valuable intel to take you to the verge of greatness and increase your odds at becoming the grand champion of the Grand Arena.

1. Avoid putting all your eggs in one basket. (Or maybe it’s a solid strategy after all).

If your opponent conquers one of your territories, they’ll earn a windfall in banners. “This means you may want to spread out your strong defensive squads, because putting your top three squads on defense in a single territory and three weaker ones in the other territory can create an easy target for your opponent,” says Scheel. But he concedes that putting your best defenses in the same place could also make that territory nearly impossible to defeat. “That’s a solid strategy when you have confidence you can take out at least one of your opponent’s territories.”

2. Save your squads for quick use in the Grand Arena.

Squad goals: Scheel preps different squads for offense and defense to save time later. “It also allows you to plan out which squads you’ll use on defense and which to save for offense.” And he saves the squads in the order he’ll place them in to cut down on confusion. “In my saved squad list, squads 1-3 go in my top territory and squads 4-6 go in my bottom territory.” Guess and test new configurations until you find what works for you!

3. Choose a path – go heavy on offense, defense, or strike a balance. “Some squads are better on defense than others, and some of the ‘glass cannon’ squads are much better on offense,” Scheel says. “Explore different strategies and see which ones work best for your collection of characters and ships -- and your play style.” And don’t forget, you can always turn back and change your strategy for each new round. 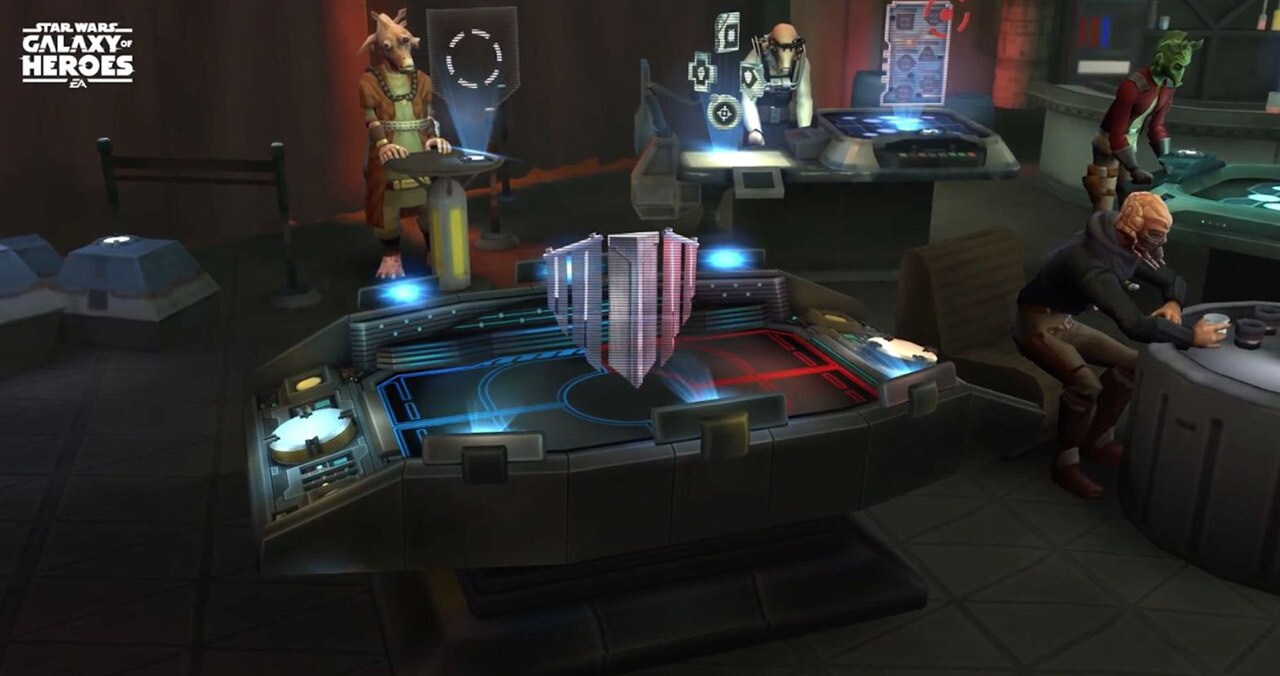 4. Choose your offensive matchups carefully. One should always pick an opponent with care, especially if you hope to emerge victorious. Some matchups in the Grand Arena are just destined to fail. For example, if you’re playing as the First Order, Scheel does not recommend picking a fight with the Resistance led by Rey fresh from Jedi training. But Imperial stormtroopers against the clan of the Nightsisters? That’s more like it. “Remember, you may not need to take out all of your enemy’s squads to win -- you just need to earn more banners.”

5. Don’t be afraid of failure. “Do you think that winning 1 territory will be enough, or will you need to win both territories to earn more banners than your opponent? Take risks when necessary and be precise,” Scheel says. But don’t be wasteful. “Avoid wasting squads against defensive squads that have a much higher Galactic Power than your attacking squads.”

Bonus: You earn bonus banners if you attack and win with less than a full squad. So if you’re in a neck-in-neck race to win your Grand Arena round, consider taking some risky attacks with a lighter squad to gain the edge over your opponent.

Prepare for battle and watch the trailer for the Star Wars: Galaxy of Heroes - Grand Arena below!


Kristin Baver is a writer and all-around sci-fi nerd who always has just one more question in an inexhaustible list of curiosities. Sometimes she blurts out “It’s a trap!” even when it’s not. Do you know a fan who’s most impressive? Hop on Twitter and tell @KristinBaver all about them!
Star Wars: Galaxy of Heroes Grand Arena