A grim Jedi Master with an amethyst-bladed lightsaber, Mace Windu was the champion of the Jedi Order, with little tolerance for the failings of the Senate, the arguments of politicians, or the opinions of rebellious Jedi. As the Clone Wars intensified, Mace sensed the dark side of the Force at work, and knew the Jedi's enemies were plotting to destroy the Order and end its stewardship of the galaxy. 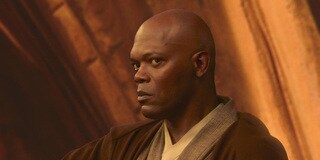 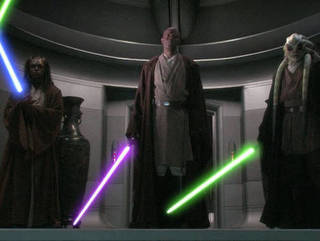 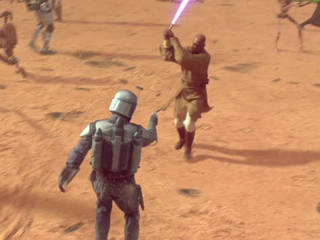 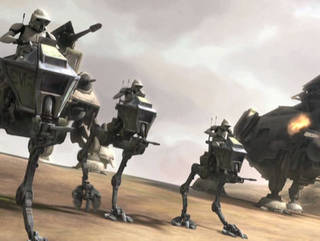 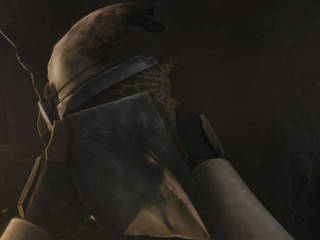 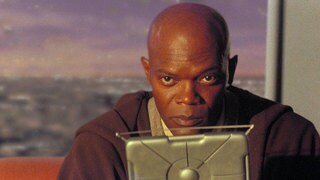 In the last years of the Republic, Mace Windu felt strange currents at work in the Force. Long the Jedi’s champion, he sought to maintain the Order’s ancient traditions amid galactic unrest and political corruption. Never patient with those who disobeyed the Jedi Council, Mace doubted the maverick Jedi Qui-Gon Jinn’s belief that the ancient Sith had returned. Qui-Gon was correct about the Sith, and died in combat with Darth Maul, who was in turn struck down by Obi-Wan Kenobi. At Qui-Gon’s funeral, Mace and his old friend Yoda pondered an unhappy riddle: Had Maul been the Sith Master, or the apprentice?

Mace also thought little of Qui-Gon’s insistence that young Anakin Skywalker was the Chosen One foretold by Jedi prophecy. Anakin showed great ability with the Force, but Mace denied Qui-Gon’s request to train the boy. Anakin, Mace felt, was too old to dedicate himself to the Force without being distracted by his emotional attachments. Mace never stopped doubting young Skywalker, and his ill-concealed distrust would cast a shadow over their relationship as Anakin ascended the Jedi ranks.

As the Separatist crisis engulfed the galaxy, Mace warned Chancellor Palpatine that the Jedi were too few to defend the Republic in case of war. Mace’s background blinded him to the growing threat posed by Separatist leader Count Dooku: he refused to believe that a former Jedi such as Dooku would stoop to targeting senators such as Padmé Amidala for assassination. But Mace heeded Yoda’s warnings that the dark side of the Force was behind the galaxy’s troubles. And he couldn’t ignore other dangerous developments, such as the revelation that someone had hired the mysterious Kaminoans to build a clone army for the Republic.

When the Separatist-allied Geonosians captured Obi-Wan, Anakin, and Padmé, it was time to take action. Mace led a strike team of Jedi to Geonosis, battling Dooku and his droids in the planet’s gladiatorial arena. Mace struck down the bounty hunter Jango Fett, but the Separatist hordes overwhelmed his forces. Mace refused to surrender, and only the arrival of Yoda and the clone army prevented his death in battle. Mace’s escape gave him little comfort -- the galaxy was now at war, with the Jedi forced into an unfamiliar and dangerous role as generals.

During the Clone Wars, Mace’s forays onto the battlefield showed why he was renowned as a warrior. During the Republic campaign to retake Ryloth, he led clone troopers in the assault on the city of Lessu and personally captured Wat Tambor, the Separatist emir who’d looted the planet. Though notorious for loathing politics, he proved an able diplomat, brokering an understanding between the Twi’lek freedom fighter Cham Syndulla and the planet’s corrupt Senator Orn Free Taa.

Mace spent much of the Clone Wars on Coruscant, directing the Jedi in their perilous role of wartime leaders. Mace was quick to punish Jedi who failed to follow orders, reassigning rebellious Padawans such as Ahsoka Tano to mundane duties that allowed them time to reflect on their mistakes. Mace jealously guarded the Jedi’s independence against outside interference and sought to uphold Jedi values when dealing with the military and politicians. He opposed Malastare’s Dugs when they decided to kill the ancient creature known as the Zillo Beast, and decried Palpatine’s decision to bring the mighty beast to Coruscant for scientific study. As the war continued, Mace came increasingly to distrust Palpatine -- though he never guessed that the Supreme Chancellor was in fact the Sith Lord Darth Sidious.

Mace was troubled by Palpatine’s request to make Anakin his representative on the Jedi Council, warning his fellow Jedi Masters that it was dangerous to pair the Supreme Chancellor with the powerful, tempestuous young Jedi. He agreed that if Palpatine failed to surrender his wartime powers after the death of the Separatists' General Grievous, the Jedi should remove the Supreme Chancellor from office and take control of the Senate.

When Anakin discovered Palpatine was the Sith Lord Darth Sidious, Mace knew the future of the Jedi Order was in grave danger, and sought to arrest the Supreme Chancellor. Mace seemed to defeat Sidious and raised his lightsaber to strike down the Sith Lord, but a desperate Anakin ignited his own weapon and severed Mace’s forearm. Sidious then blasted Mace with Force lightning, sending the great Jedi champion plummeting to his death.