Unlimited Power! How Star Wars: The Secrets of the Sith Will Take Fans to the Dark Side

The writer and artist behind the new book -- written from the perspective of Emperor Palpatine -- talk to StarWars.com.

"If one is to understand ‘the great mystery,’ one must study all its aspects. Not just the dogmatic, narrow view of the Jedi.” Palpatine’s words to Anakin Skywalker were key in bringing the noble hero to the dark side.

Insight Editions will unleash Star Wars: The Secrets of the Sith -- written in the voice of ol’ Palpy himself -- on October 5. The book is an exploration and celebration of all things dark side, featuring Darth Sidious’ thoughts and wisdom regarding Force powers, Sith warriors, and more, complete with gorgeous, fully-painted art. StarWars.com caught up with author Marc Sumerak and artist Sergio Gómez Silván, also the talents behind Star Wars: The Secrets of the Jedi, to prepare for our journey down the dark path. 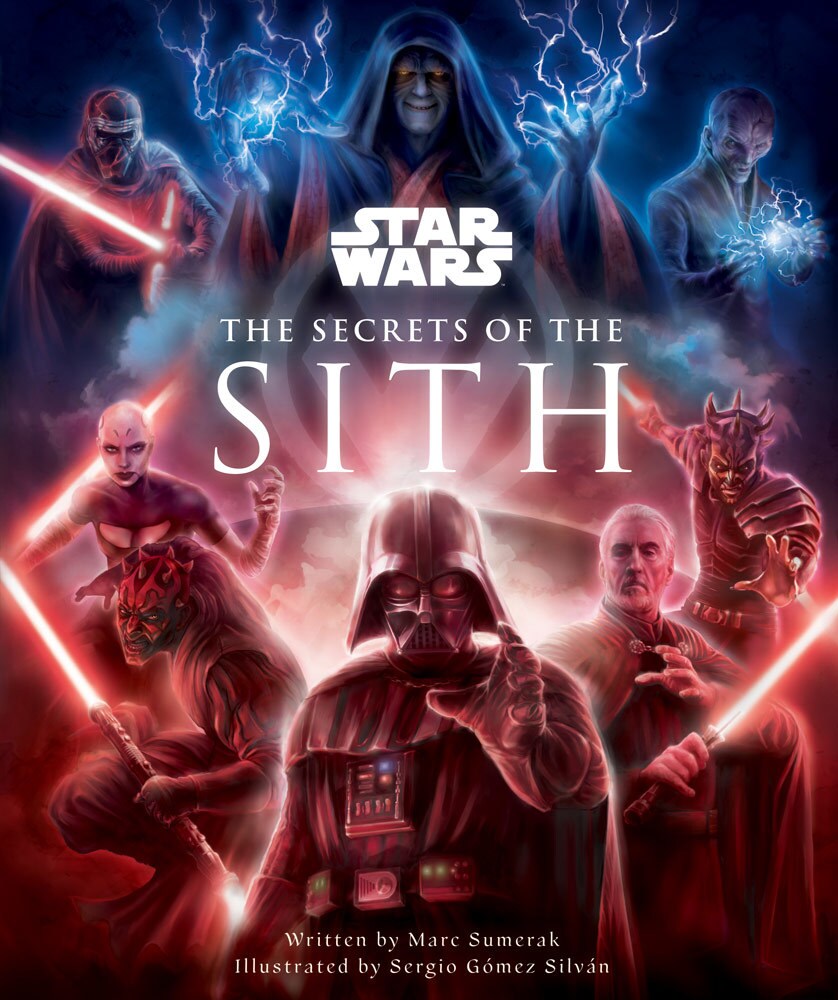 Diving Into the Dark Side with Marc Sumerak

StarWars.com: The Secrets of the Sith is written in the voice of the Emperor, who always has the most fun dialogue and delivery. How much did you enjoy channeling your inner Palpatine?

Marc Sumerak: After writing from Luke Skywalker’s perspective in The Secrets of the Jedi, it was pretty wild to cross over to the dark side and let the Sith Lord inside of me out to play. As over the top as the Emperor can be, he also had a more reserved public face back in his days in the Galactic Senate, so the challenge here was finding just the right balance of cunning strategist and power-mad despot to make the book crackle with Force lightning. The guidance of my editor, Chris Prince, was essential in my transition from Marc Sumerak to Dark Sumerak. In a way, he became my Sith Master on this project...so he’d probably better watch his back!

StarWars.com: The book is filled with character bios, reflections on the nature of the Force, and histories. How did you decide what to include and what Palpatine would know about each?

Marc Sumerak: As with any project like this, it’s all about diving deep into the established lore and refocusing it through the perspective of the narrator -- in this case, Emperor Palpatine. No matter how many times you’ve experienced the movies, the animated series, the novels, or the comics, there’s always something new to learn. So it’s important to go back and view them again with that specific character in the forefront of your mind, paying special attention to their interactions, their choices, and their motivations. Once you’re inside of their head, then it’s all about marrying the facts with that character’s perspective about them. And much like with The Secrets of the Jedi, we’re dealing with a narrator who has very specific beliefs about this subject, so it might be best to take some of his opinions with a few grains of Crait salt.

Marc Sumerak: I think they’ll learn that our pal Sheev is really just a loveable, misunderstood scamp! Kidding. More than anything, I think fans will revel in the chance to get inside of the Emperor’s mind and to explore his generation-spanning master plan from his perspective. He may have been twisted by the dark side, both physically and mentally, but there’s no denying that he planned for every eventuality. Well...almost every one. 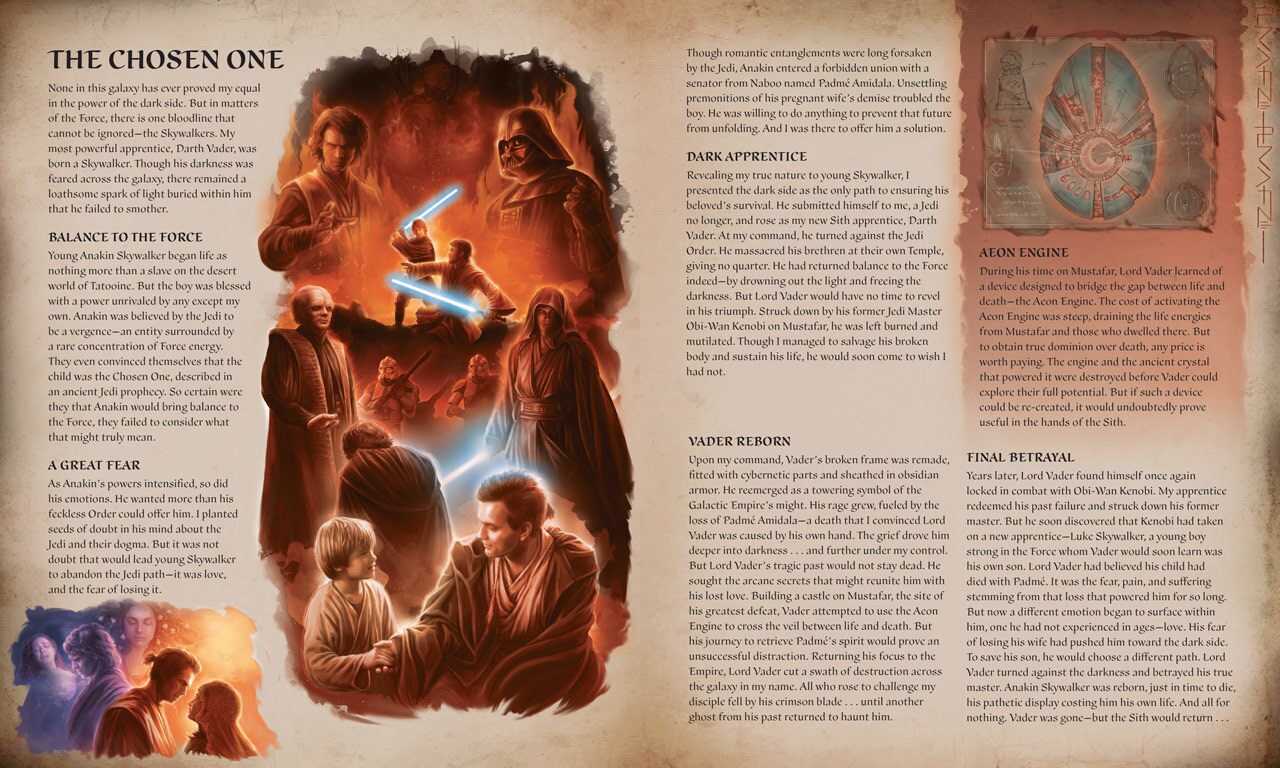 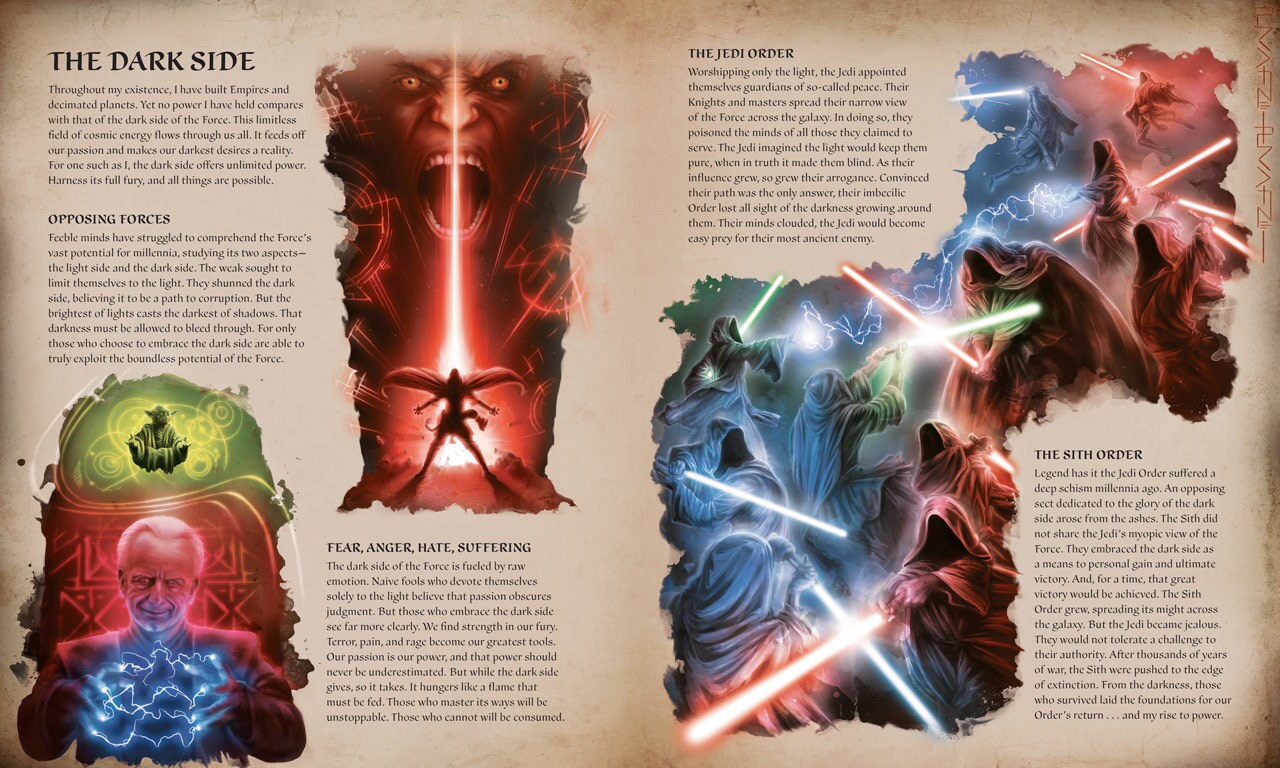 Bringing the Dark Side to Life with Sergio Gómez Silván

StarWars.com: In the spreads we're showing -- a section on Darth Vader and the dark side -- I'm struck by the bold use of color. Can you talk about your use of color and what you want to convey through it?

Sergio Gómez Silván: I tried to show the evolution of Anakin, from the yellowish tones of the desert of Tatooine where he first met Obi-Wan, through the reddish part at the center where he commits the terrible massacre at the Jedi Temple, leading to his inevitable fate as a Sith, to the orange fires of Mustafar where he burns -- completing his metamorphosis to Darth Vader. And I put all this in contrast with the blue of the lightsaber, giving Obi-Wan prominence as the connection to the light side. My goal was to build an image out of contrast, light, and shadows, more than using a wide palette of color, and I hoped to make sense of the story behind all the overlapped layers.

Sergio Gómez Silván: Oh, thank you! I'm glad you said that, as I am definitely trying to capture a mythic feel in my illustrations. First, I started from the idea of medieval books of knights and saints, and I also researched the art nouveau style and Japanese parchments from the feudal era. But also, I wanted to mix these ancient elements with the technological galaxy of Star Wars. When creating the illustrations, I usually work from the lightsabers -- I mean, these weapons are so prominent, iconic, and visually dazzling that I have to compose the image and color based on them. Style-wise, I chose the watercolor splashes to give the imagery dynamism and a spontaneous look, and then used softer handmade lines to add a more ancient feeling.

StarWars.com: Which did you enjoy more -- creating art about the light side, or the dark?

Sergio Gómez Silván: That's a tricky one. Well, since The Secrets of the Jedi was the first book in the series, I struggled to find the style and I wasn't totally convinced I had it right until the book was almost over. On the other hand, for The Secrets of the Sith I already had an established style so I had a solid base to work from, allowing me to enjoy the process more and focus in on other aspects of the illustrations. But I will say, the bad guys are always more fun to illustrate than the good ones.

Star Wars: The Secrets of the Sith arrives October 5 and is available for pre-order now.

See Star Wars: The Secrets of the Sith and more on This Week! in Star Wars!

Interviews dark side Sith ThisWeek Star Wars: The Secrets of the Sith