'Turn Everyone Into An Inventor': The Story of the littleBits Droid Inventor Kit

The designer takes StarWars.com into the droid factory to talk about inspiring innovators and hacking her own interactive Sith Lord suit.

When Anakin Skywalker was still just a precocious young boy, he created C-3PO out of spare parts and pure ingenuity. Now Threepio's favorite glob of grease and eternal counterpart is bringing the same spirit of invention and limitless possibilities home with the littleBits Droid Inventor Kit, a new educational toy that takes the joy of learning engineering through plastic building blocks and modernizes it with simple electronics and app-enabled commands.

Plug in the 9-volt battery and flip the power switch and R2-D2 comes to to life with a chattering series of beeps and whistles, the first of 20 bluetooth-enabled sound bites. And that's just step number one! 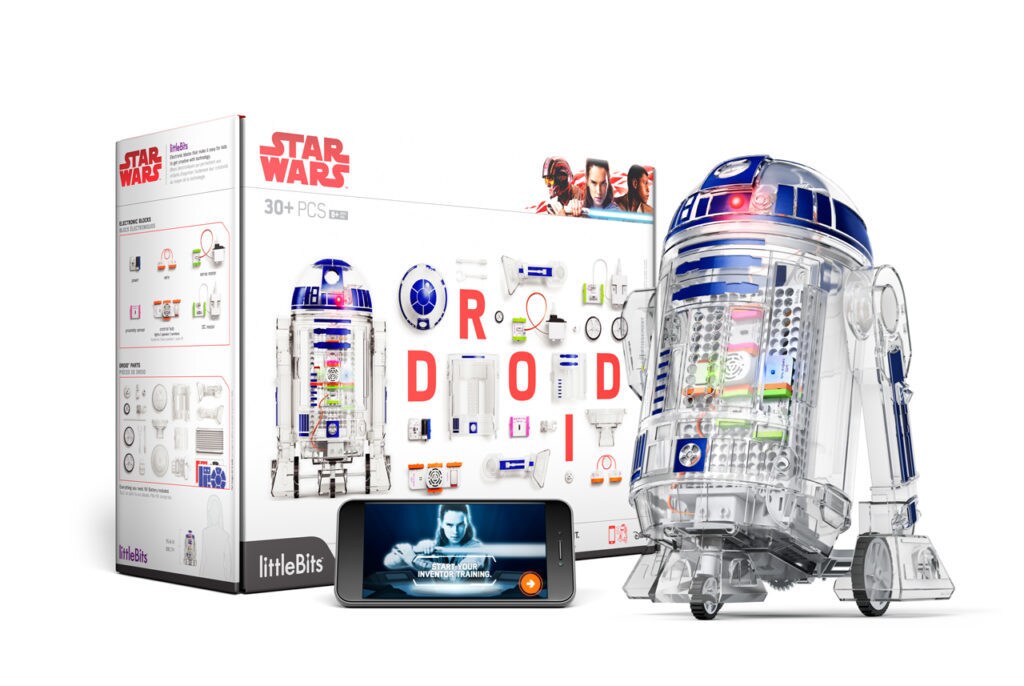 The kit encourages young builders to face their fears of failure, make mistakes, work through dilemmas, and explore new ideas. Basically, unlearn what you have learned and unleash your full potential. Yesterday, in this spirit, Lucasfilm's San Francisco headquarters hosted the littleBits "Droidathon," featuring droids built with the kit by members of ILM, as well as leading tech companies including Facebook, Google, and Instagram. On hand was The Last Jedi's Kelly Marie Tran, as well as local students to judge the varied creations. The event kicked off littleBits' Droid Inventor Kit competition -- of which Tran, Lucasfilm president Kathleen Kennedy, and Daisy Ridley will be judges -- and the droids on display were truly inventive and inspiring. You can see photos of these most impressive droids and more from the Droidathon in the gallery below. 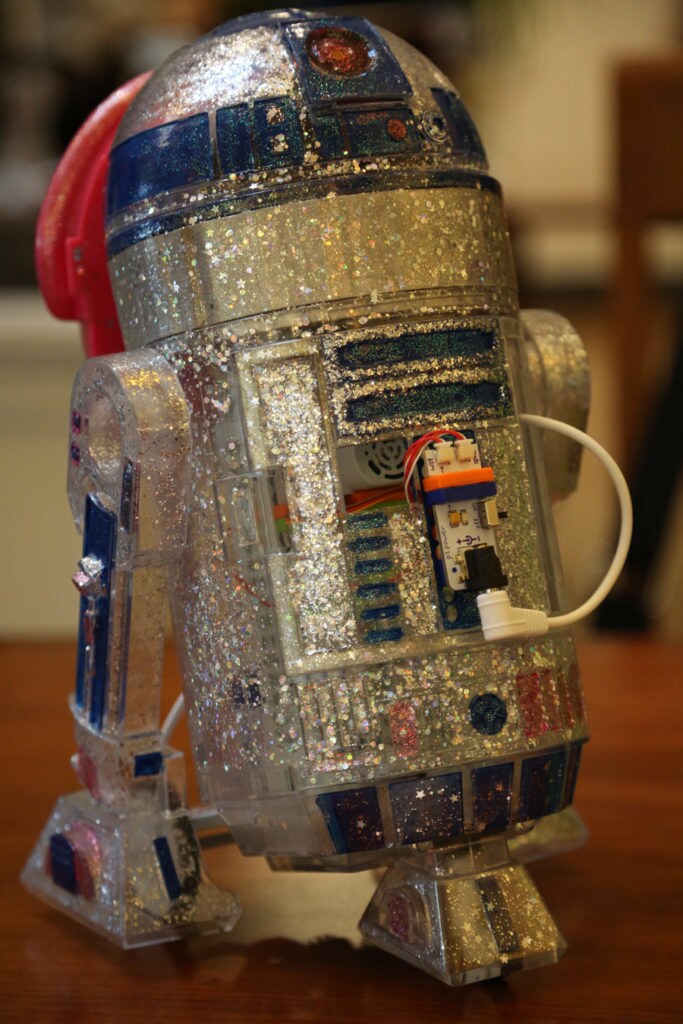 StarWars.com recently sat down with littleBits' director of product design Krystal Persaud, who's also the droid designer and a longtime Star Wars fan, to find out more about the clear plastic astromech's creation inside the relatively new Manhattan-based toy company.

Since littleBits launched in 2011, the company has amassed an interchangeable library of over 65 interactive bits, easy-to-use electronic building blocks that snap together easily with magnets, taking a hands-on approach to teaching children about STEAM, or science, technology, engineering, the arts and mathematics. LED lights, power cells, motors, and sensors come together to help kids create working guitars, sibling alarms to protect private spaces and anything else they can imagine. 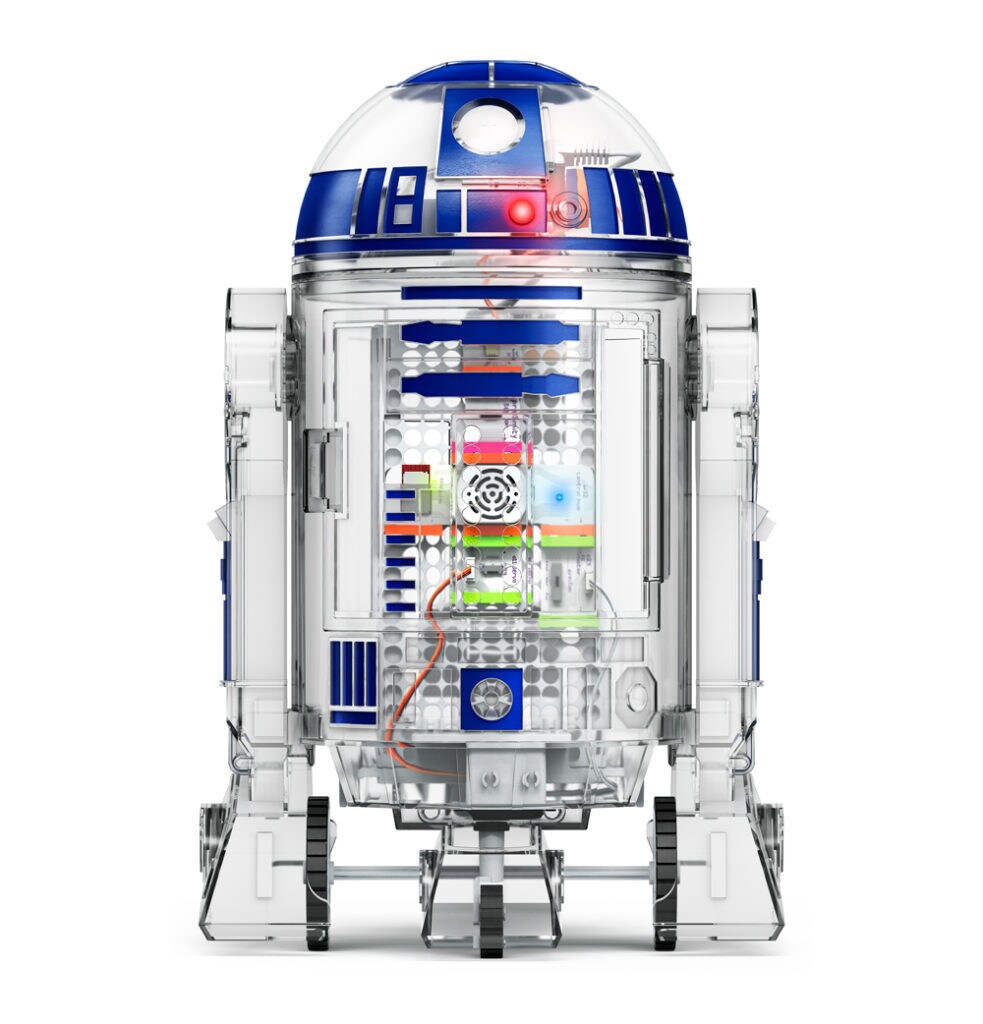 The Droid Inventor Kit provides a little more guidance than the littleBits sets that have come before it, with a clear guide to creating your own Artoo powered by six bits, including a proximity sensor, DC motor, and servo, all the standard protective body parts that come together with a satisfying click, and the technology to send him out on missions with highly sensitive intel, teach him to draw and navigate obstacle courses, or simply employ him as new sidekick for your cat. Among the Jedi mind tricks that come with the app, kids can guide their astromech with a wave of their hand (like any Force-wielder in training), and other upgrades allow the head to spin 360-degrees.

But Persaud says the designers also wanted to make sure that their droid had plenty of opportunities for young inventors to leave their own unique mark on their creation. Each kit comes with stickers to customize the plastic shell, but inventors are also encouraged to think outside the astromech, swapping out the body for a milk carton or other household objects and playing around with the style of the standard domed head unit.

So far, it's working. Among the ingenious upgrades, two sisters under the age of 10 developed serving technology to send each other M&Ms and juice boxes as if they were on Jabba's sail barge.

'Turn everyone into an inventor'

The initial idea for the company came from founder and MIT-educated engineer Ayah Bdeir's collaborations early in her career. “She's always been a very creative person and she was collaborating with some designers and really wanted to create tools so that designers could invent with electronics as easily as if they were engineers,” Persaud says. But Bdeir quickly realized that outside of those who had studied the field, engineering, invention and electronics seemed out of reach. “If we could boil down all of these interactions into really easy pieces and make it fun and accessible, anybody could be an inventor,” she thought. “That's really where she started reimagining this building block that was interactive and electronic for the 21st century. And, you know, since then littleBits has been on a mission to turn everyone into an inventor.”

The littleBits were designed in an array of candy colors, coded for individual purposes but designed with as little text as possible, coming together on a plain white circuit board. “Every aspect of the product is designed to be very universal,” Persaud says. “Our goal on the design and engineering teams is to have as little text as possible so that they are very intuitive and you shouldn't need to read anything....We do look at tech trends and what new pieces of technology are coming to market. And that's something that we feel is really valuable about the littleBits platform is it's not just modular so if we wanted to add a VR bit, we technically could. And then it would work with every other bit.”

Each week young testers converge on the office space to play around and offer their own opinions to help guide the company. But don't be fooled into thinking littleBits are just for kids. Persaud has used the standard littleBits pieces to hack her own Darth Vader costume, an ensemble she's been working to upgrade each year since 2009 (even though at nearly 5'7” she's a little short for a Sith Lord). 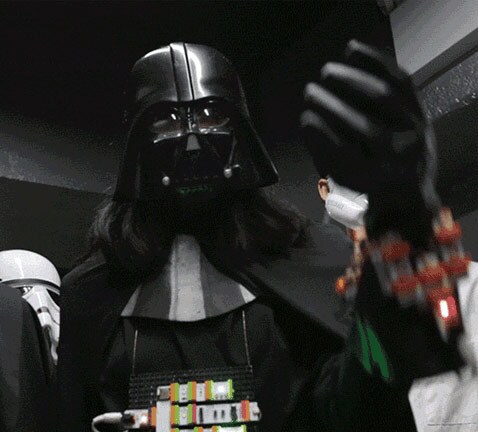 Persaud has always been an Imperial sympathizer, it seems. The youngest of four sisters was guided by her oldest sibling who discovered Star Wars when the films were first released in theaters. By the time Persaud, now 29, arrived, the family was watching the saga regularly during family movie nights at home. “My older sister -- she's like the original superfan, I think.”

Persaud was old enough to see the prequels on the big screen, and her uncle made sure she had a Jar Jar Binks poster for her room, delivered as a birthday gift, “which was not my favorite, but I took it.”

She simply preferred the Dark Lord himself. “I'm a huge Darth Vader fan. I love Darth Vader,” she says. So much so, when she got married this fall, her co-workers threw her a Vader-themed bachelorette party. And each Halloween, Star Wars Celebration, or Force Friday, she dons the black helmet of the Sith apprentice.

The littleBits pieces have helped her make the suit more interactive, adding breathing sounds, the Imperial March, and key snippets of dialogue -- for the moments when Persaud finds your lack of faith disturbing -- to a voice box that can be triggered with a clench of her fist.

And two years ago she hacked the other glove with a bunch of blinking lights and other pieces to make it look like she'd just lost a hand in a lightsaber battle.

For Persaud and the company at large, the Droid Inventor Kit is taking the first steps into a larger world. It's a departure from the free-form designs of earlier kits, with the chance to engage a new audience that may be intimidated by sets lacking in concrete design plans. But it still retains that open-ended, choose-your-own-adventure style of play. “There actually is a lot of remixing and configurability that can happen with this one character. Sometimes, if you're staring at a blank piece of paper, it can be hard to get inspired.”

Artoo was an obvious choice as the base model. “He's definitely a favorite around the office,” Persaud says. And early on in the process, a kid tester walked into their lounge and gave their Artoo prototype a snuggle. “She walked into the room and she just hugged the droid. She just saw it and hugged it,” Persaud says. “That's one of my favorite moments. And that's the thing about R2-D2; there's this emotional attachment that you have to him. Once you hear that R2-D2 sound you know exactly what it is and it either makes you laugh or smile. 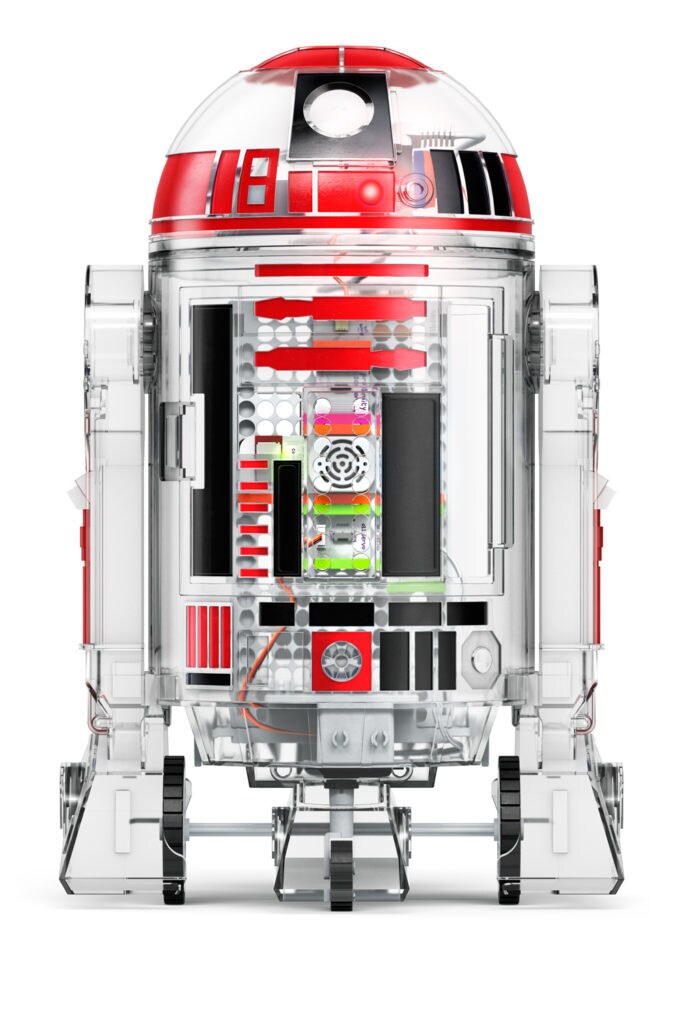 “When you look at the entire span of the franchise," Persaud continues, "we felt like R2-D2 for parents and for kids was the most recognizable and the most beloved character. He has this mix of being like a loyal companion, he's a little mischievous, he's very cute and adorable...Anakin obviously made C-3PO, but making more of a humanoid robot is pretty advanced for your first robotic exploration.”

The astromech's tripod base makes for a solid starting point as young inventors dabble with making their own modifications. “Kids are extremely creative and smart, and they have a lot of opinions, and they have a lot of self expression -- especially at that age. So one of the things that we really embraced was making sure they had a lot of possibilities for different kids with different personalities. So if you were the type of kid that did maybe want to prank someone and make an astromech disguised as a milk carton, then you could absolutely do that. If you wanted to try to make your droid look like a replica, you could absolutely do that, too. The kit also comes with three sets of colored decals -- classic blue, red and black, and a white set -- so if you didn't want to make a blue replica, you can actually use the white set and make it any color you want, and that is sort of an extension of that kid's identity.”

The black stickers sort of suggest an undercover mission aboard an Imperial Star Destroyer, a la Star Wars Rebels' Chopper. “And I definitely was a big advocate for that,” Persaud says.

In the weeks since it hit shelves on Force Friday, the Droid Inventor Kit has won over fans and cleaned up accolades, including being named in Good Housekeeping's 2017 Best Toy Awards and among Walmart's "Top Rated by Kids." “We've been getting really great feedback,” Persaud says. “One of the things that I'm the most proud of on this project is we've really hit on something unique, empowering people to be tinkers and be creative. There's not a lot of other toys out there like that.

“Parents really understand the value and see their kids are creative, and this is a toy that gives them an outlet to do that. We talked to a lot of parents who were buying it for their kids but also themselves. And we hit upon something -- that it's actually a really great family activity that they can do together.” 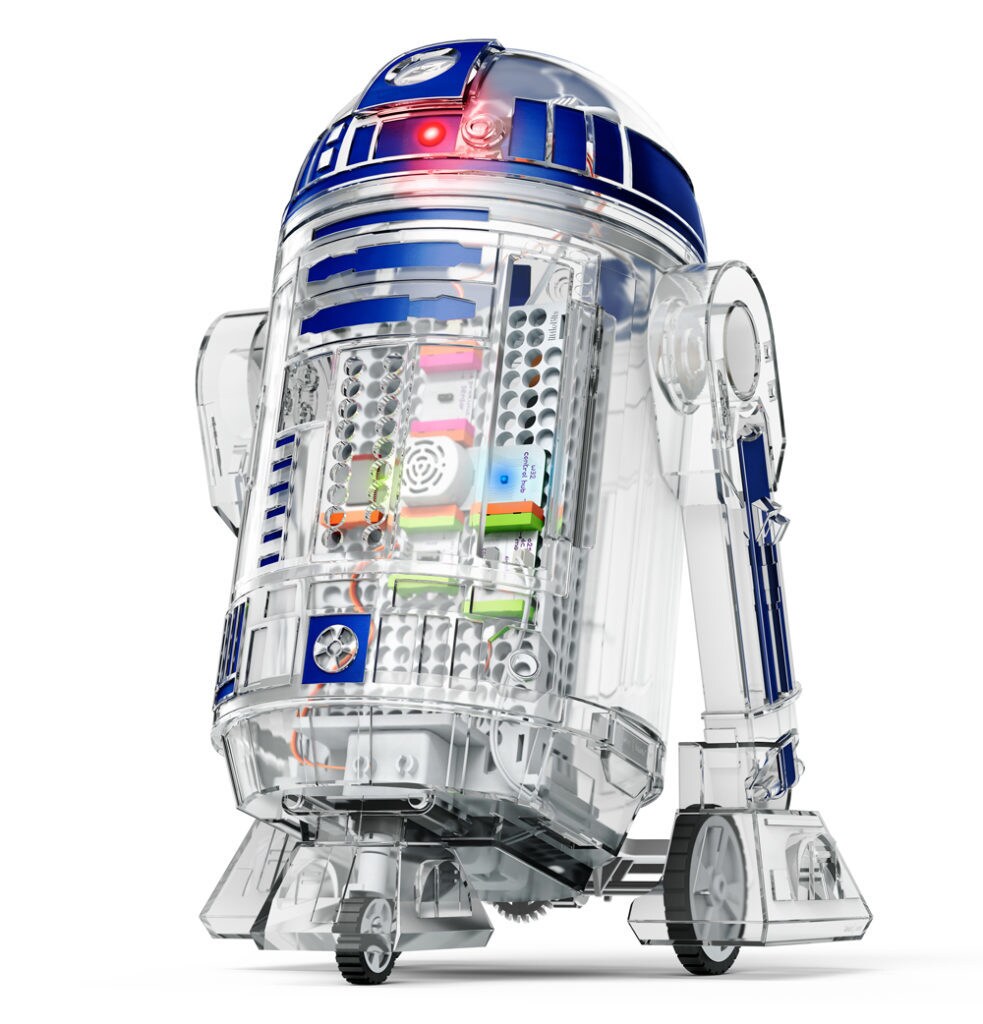 And although Persaud couldn't say if there are other Star Wars-themed collaborations in the works, she would love to design some dark side toys to add to the mix.

There's even a joke among her colleagues that they could one-day create the ultimate battle station -- a Death Star Builder Kit.

“That would be amazing!” she says. But they wondered: “Do you really want to make the one weakness? You touch it in one place and it just explodes,” she laughs.