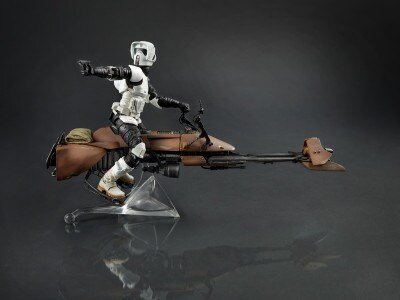 The Force is strong -- with action figures and plastic lightsabers -- at Toy Fair 2014. Hasbro has unveiled new toys and vehicles for several major Star Wars lines, including Star Wars Rebels, the Black Series (including deluxe-size creatures and vehicles in the 6-inch collector's line!), the brand-new Star Wars Command, and lots more. Check out our gallery after the jump!

Based on the upcoming animated series, Hasbro showed off the first toys and vehicles for Star Wars Rebels. Ezra, Kanan, Chopper, and the crew of the Ghost will soon join classic Star Wars icons -- immortalized in 3.75-inch form.

Hasbro made history with its collector-oriented line, The Black Series, which introduced the first ever highly detailed, 6-inch Star Wars figures. It's been a massive success thus far, and is expanding with a deluxe assortment of even larger figures, including Jabba the Hutt and a Speeder Bike with Scout Trooper.

Not to be outdone by their 6-inch cousins, the 3.75-inch Black Series figures continue to impress in areas of articulation, paint-apps, and playability in the classic Star Wars toy scale. New entrants include Dagobah Luke, Snowtrooper, and more.

The Star Wars Armory line brings home the weapons of a galaxy far, far away, with a major new entry revealed at Toy Fair: The Inquisitor's double-bladed lightsaber from Star Wars Rebels.

Additions to the Star Wars Mission Series, two-packs of 3.75-inch figures based on worlds, include Utupau (Obi-Wan Kenobi and General Grievous), Bespin (Luke Skywalker and Darth Vader), and more.