A designer for the One for One company tells StarWars.com how he used classic trilogy concepts and new line art to create simply sophisticated footwear.

Nathan Photavath was seven years old when his family first introduced him to the Star Wars saga. “You know, when you are a kid, you really think everything your older brother does or shows you is really cool,” Photavath recalls. In this case, he was right.

He rewatched his favorite scenes on the family’s VHS player and spent countless hours playing a video game version on his Super Nintendo, his interest and knowledge of the franchise expanding each day. By the time Star Wars: The Phantom Menace hit theaters in 1999, he took a half day off school for the special occasion of seeing the film in the theater when it debuted. “I was just in awe of the visuals, landscapes, costumes, and effects,” he says. “Star Wars has always been ahead of its time for pushing the limits and boundaries of storytelling, innovation, and effects.” 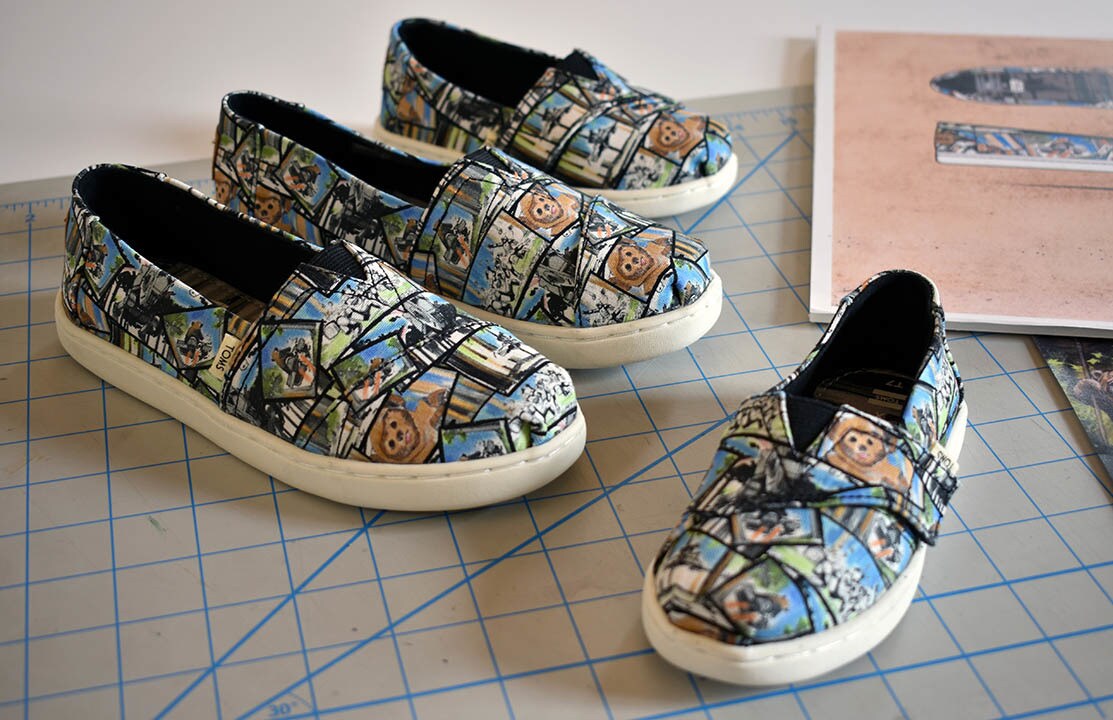 Photavath is now a senior footwear designer for TOMS -- the popular unisex shoe company that also pioneered a humanitarian effort 13 years ago called One for One, matching every pair of shoes purchased with a pair of new shoes for a child in need and evolving to provide other basic needs. He recently put his passion to work designing the company’s first-ever collaboration with Star Wars, pairing the classic TOMS design with storyboards from the classic trilogy. The fashionable line, launching this week, pays homage to the beginnings of both the TOMS brand and the Star Wars saga.

StarWars.com sat down with Photavath to talk about his inspiration for each and how he artfully expanded on classic concepts for contemporary, stylish designs. StarWars.com: The new collection takes its inspiration from concept art and storyboards. What made you decide to use these early iterations of the film creation instead of going in another direction? How did you choose which scenes to focus on?

Nathan Photavath: From the start, we thought about, “How do we make our collaboration different from others in the past by building on what is unique to both parties?” The TOMS brand started off with one iconic shoe, the Alpargata, and pioneered the One for One model. For every shoe we sold, we gave another to a child in need. We wanted to merge the idea of where it all started in the first drop to build the foundation of the collection and partnership. Hence, focusing the collection on the classic saga. After touring the Lucasfilm office, I was immediately inspired by the film’s original storyboard concept art and images floating around the building. Diving deeper into each film from the original trilogy, I thought about which landscapes and scenes really stood out as being iconic, and to top it off, these were almost like flashbacks of my earliest memories from the films. StarWars.com: Once you landed on the images to focus on, did you add your own artistic spin to the art or art direct the original storyboards into a pattern?

Nathan Photavath: After selecting key storyboard scenes and concept art, we decided to add some extra elements and put our own TOMS twist to the custom prints. We paneled the scenes of the concept art to wrap around the exterior of the upper pattern, adding some color pops to give it another level of dimension. At the same time, we wanted to make sure we were creating designs that were unisex, for everyone to wear. 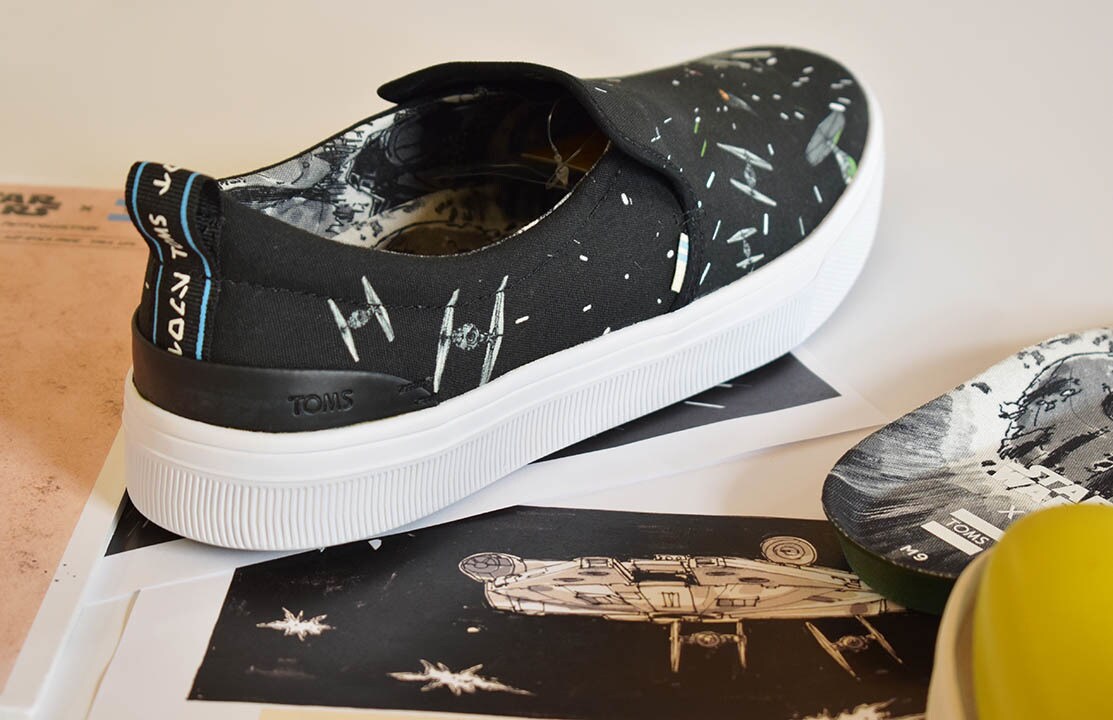 StarWars.com: What about the designs on the other styles in the line, the slip on and lace up? What can you tell me about the details you incorporated to make them extra special, like the Aurebesh on the back?

Nathan Photavath: The idea here was to expand on the original concept art and evolve it to have more fun with the characters and elements. For the slip on, I thought it would be really cool to create a print that highlighted the space battle/dogfight. By using perspective and looking down at the shoes, I wanted the wearer to feel like they were indeed in space in the middle of all the action. For the lace up, we picked out some classic fan-favorite characters and did a really cool all-over print. In keeping with storyboard themes, I modified the character art details to have a blue pencil sketch on a white based canvas to really make it pop and look like a concept sketch. Each character has their own unique signature and quotes that we decided to add to the print. Tying both shoes together, we created a custom webbing on the heel that translates into “TOMS” in Aurebesh.

The Star Wars X TOMS collection is available around the globe at TOMS retail stores, online, and at select TOMS wholesale partners starting on July 2.