“This is the Way”: Artists from Around the World Celebrate The Mandalorian

StarWars.com speaks with the international talents behind a powerful new series of posters.

One of the most beautiful aspects to Star Wars is that it knows no boundaries or borders. Its fanbase is worldwide, and the themes of Star Wars -- selflessness, friendship, family -- are universal. And that spirit lies at the very core of a series of posters released earlier this month by The Walt Disney Company to mark the release of The Mandalorian Season 2 on Disney+.

In partnership with the marketing agency MEOKCA, The Walt Disney Company recruited eight artists from eight different countries to craft their own interpretations of the series, all of which feature the Mandalorian creed “This is the Way” translated into their own language. The styles are wondrously varied, ranging from Eileen Steinbach of Germany, with a minimalist expression, to Brazil’s Kin Noise, who infused ‘80s pop culture design into his work -- but are all united through the show’s famous quote. “It was an honor to have been able to help pass Mando’s message to the French public!” says Simon Delart. And it’s StarWars.com’s honor to share all of the pieces here, along with exclusive artist commentary. 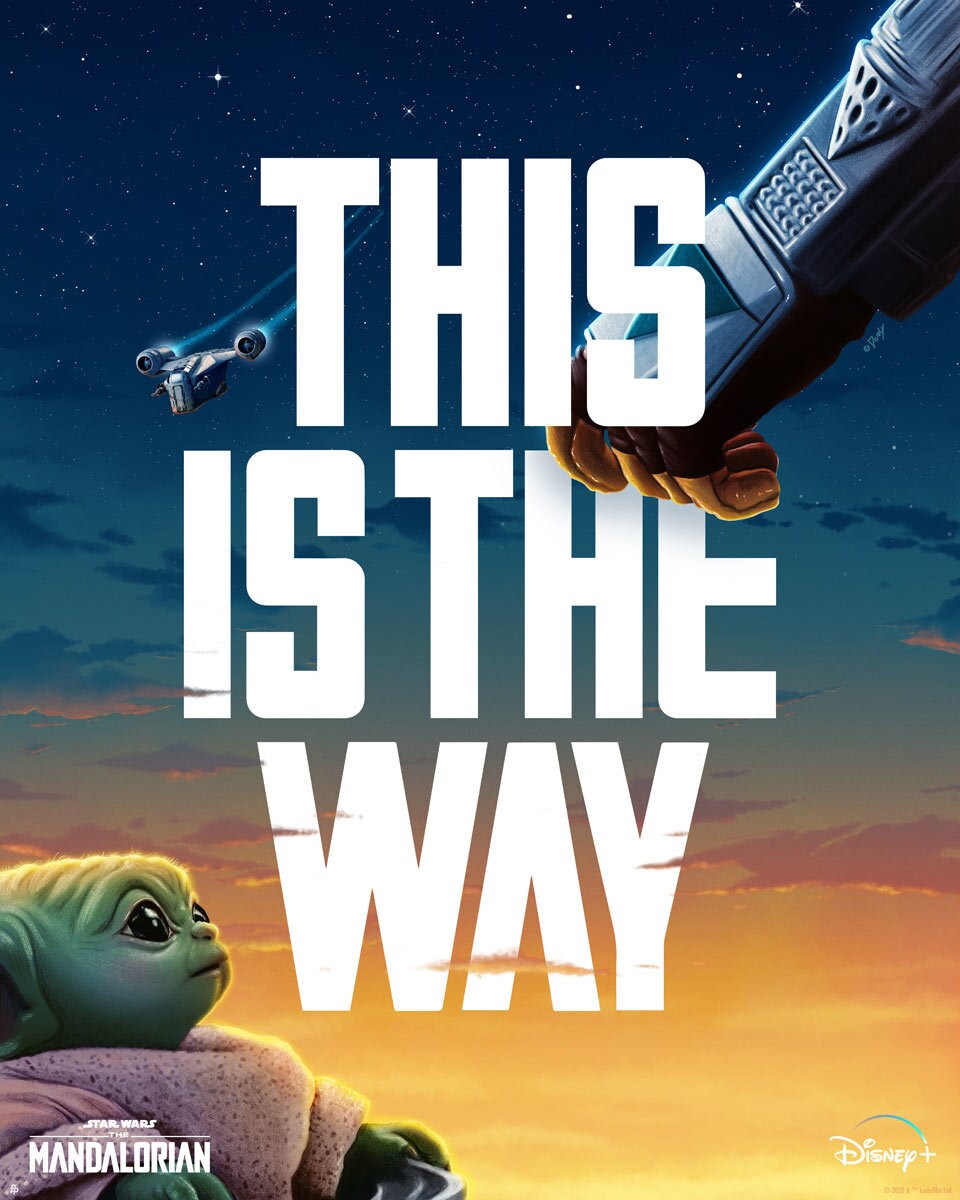 “I wanted the phrase to be part of the piece and intertwined just as [much as] the relationship between the Mandalorian and the Child -- that sense of duty he has to protect him is intertwined by that very creed. The use of my typography/the written word is a reflection of that.” -- Doaly (UK) 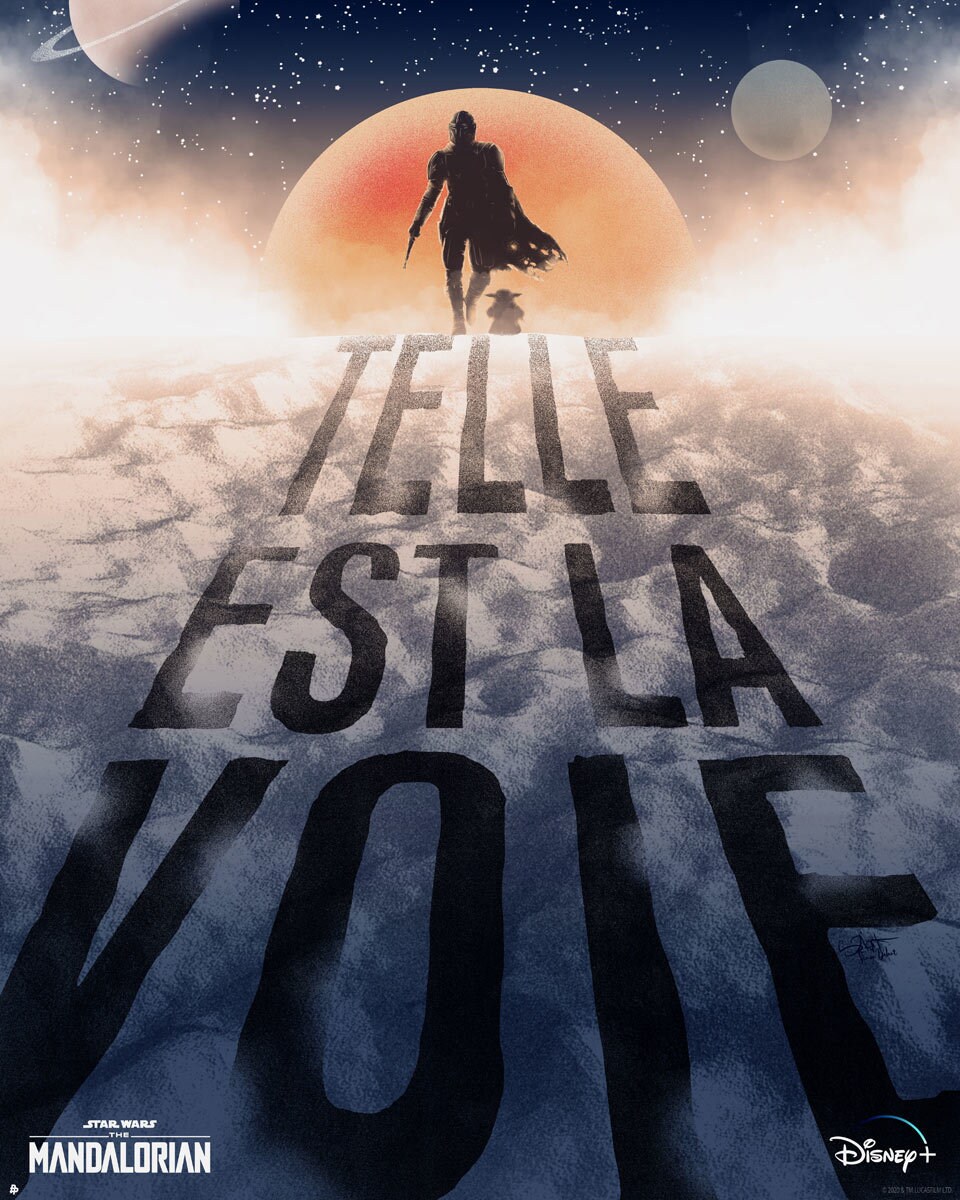 “The Mandalorian borrows a lot of codes from Westerns, and I wanted to pay tribute to the genre. Positioning the character emanating from the smoke, against the light and in front of a rising sun sounds like a perfect concept. Mando is iconized, like a cowboy ready to face all the trials before him. The phrase ‘Telle est la Voie’ takes the place of the projected shadow of the character. Its composition can also echo the cult opening credits from the Star Wars saga.

“It was an honour to have been able to help pass Mando’s message to the French public!” -- Simon Delart (France) 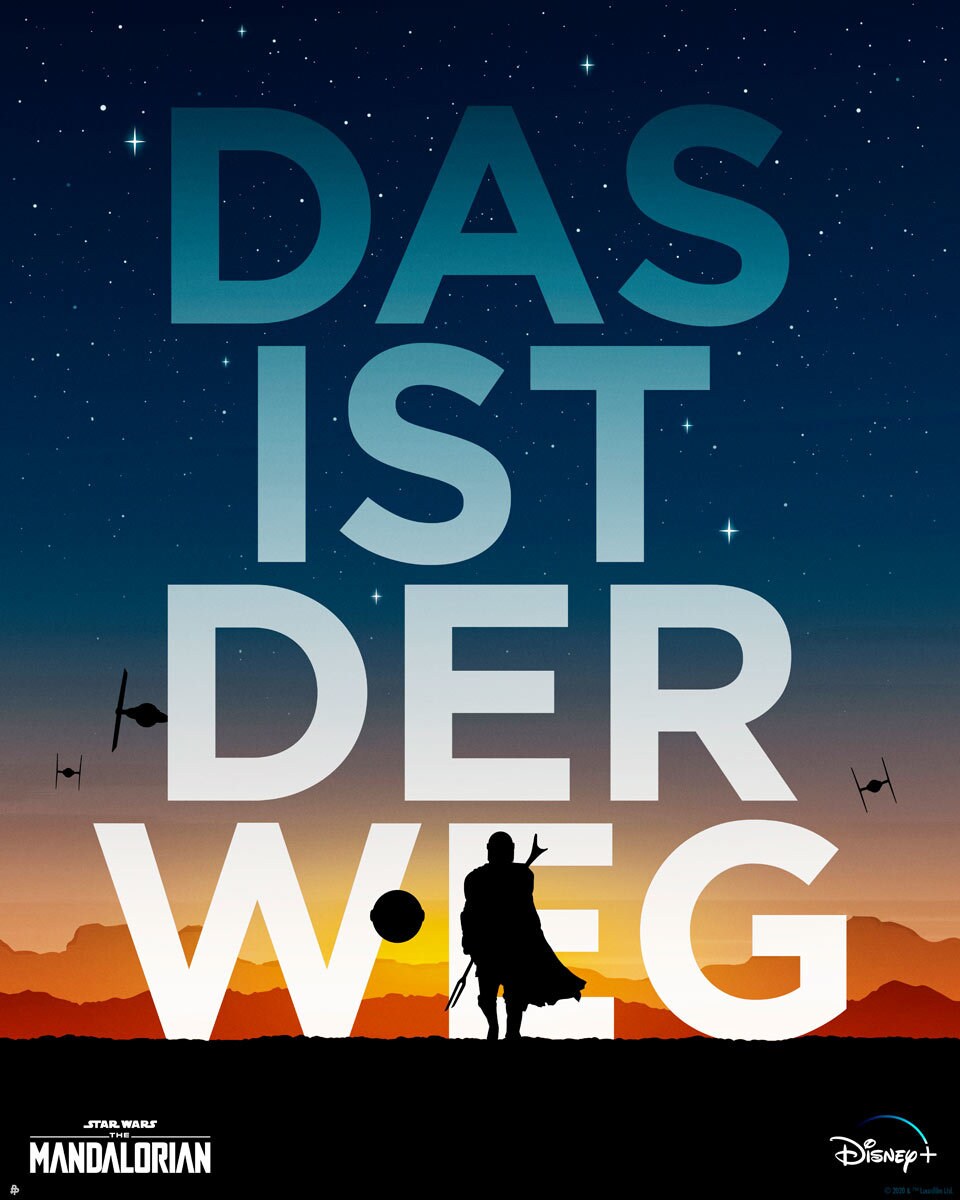 “After creating [a poster] for the first season, it was an absolute delight to be asked back for the second -- this time with a spin. I loved the idea of showcasing the iconic phrase ‘This is the Way’ in different styles and languages, as this show touched so many people around the world and brought us together through its story and love for the Star Wars universe. I knew immediately that I wanted mine to be a companion piece to my first one: something iconic and striking, simple yet stunning. In the first piece I worked with warm colors, the Mandalorian facing the world on his own; this time I went with brighter colors, the colors of the sunrise bringing a new day, representing the adventures and the journey he and the Child will face in this season.“ -- Eileen Steinbach (Germany) 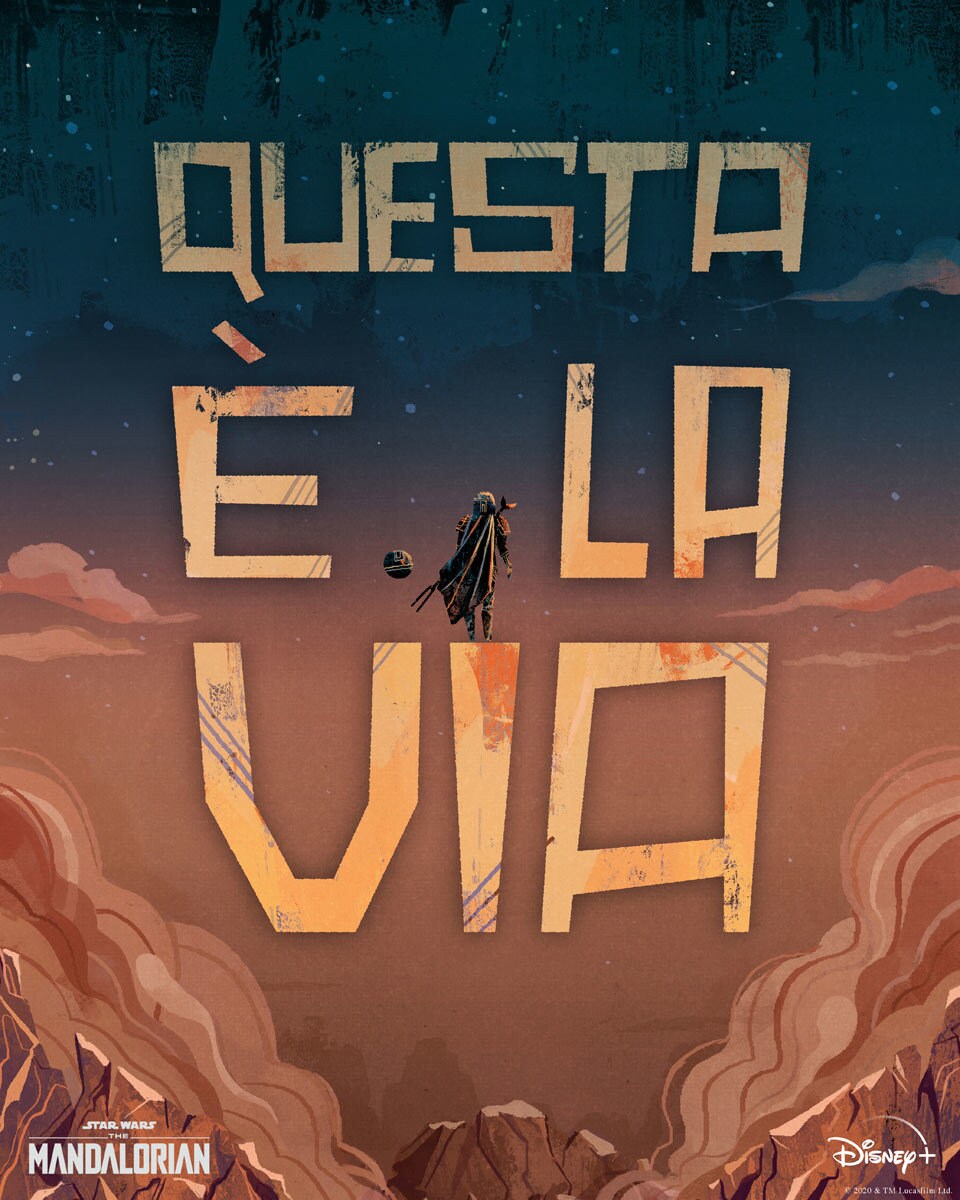 “My approach right from the beginning was that of not wanting to represent a specific scene from the series. Instead I wanted to [convey] the impression that the Mandalorian [gives off].

“When I saw the first season, two references immediately came to my mind. The atmosphere of Sergio Leone's Western movies, his long shots with a lot of room left for the environment that relates in a powerful way to man. The colors also resemble some sandy landscapes and the figure of a ‘lonesome gunman.’ The second reference is that of The Odyssey, in particular the figure of Ulysses as the archetype of the eternal traveler.

“So I looked for a synthesis between my perceptions and the story. To empower this, I thought the best way was to use the phrase ‘This is the Way’ as part of the scenography, because it moves the actions of the Mandalorian. I thought also of placing the Mandalorian from behind, because I wanted to reinforce the idea of a journey that begins, and of which we, as observers, can be silent traveling companions.” -- Flavia Sorrentino (Italy) 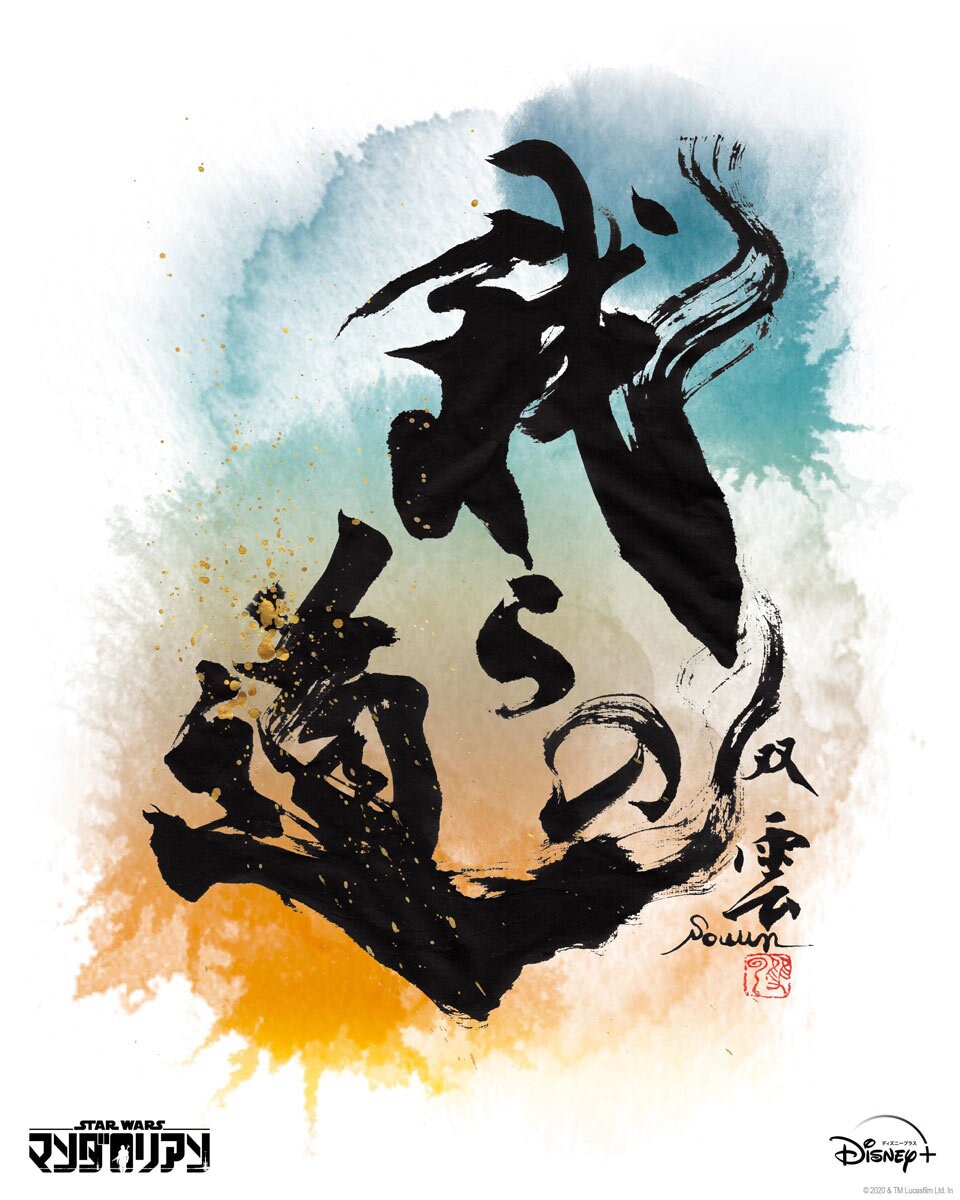 “I am so honored to work on this, since I have found the same appreciation for the world of the Mandalorian as the one of a calligrapher, as well as a person who inherits Japanese culture.” -- Souun Takeda (Japan) 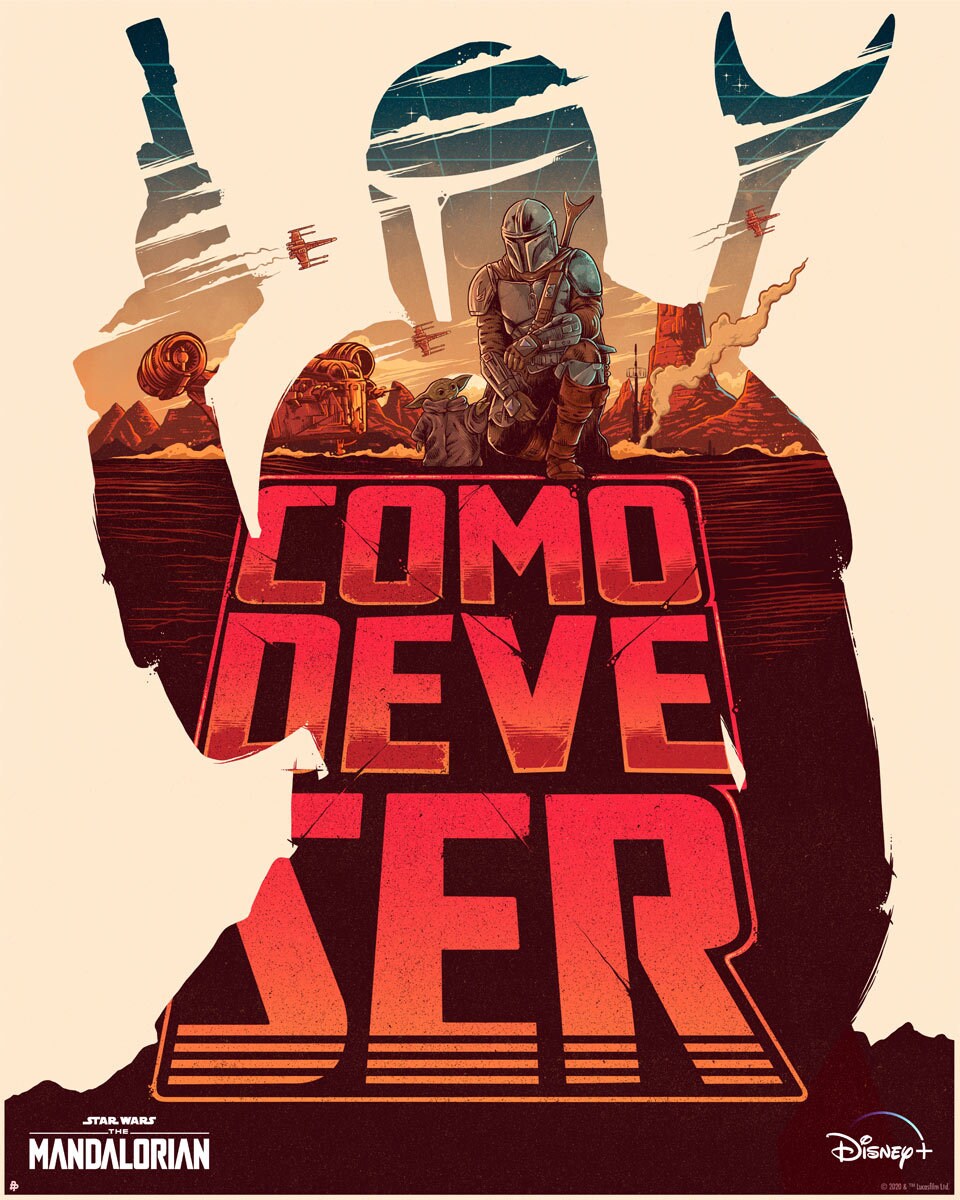 “The invitation to illustrate one of The Mandalorian posters was wonderful. As a fan of fantasy and sci-fi, I was able to apply a little of my style, an aesthetic inspired by ‘80s comics, bright colors, and a look that reminds me of old arcade games.

“The composition of the illustration has the gestalt in the form of Mando giving emphasis to the text in Portuguese: ‘Como deve Ser.’ Inside, I could represent Mando and the Child, not forgetting to bring the Western look to the incredible Razor Crest and X-wing starfighters.” -- Kin Noise (Brazil) 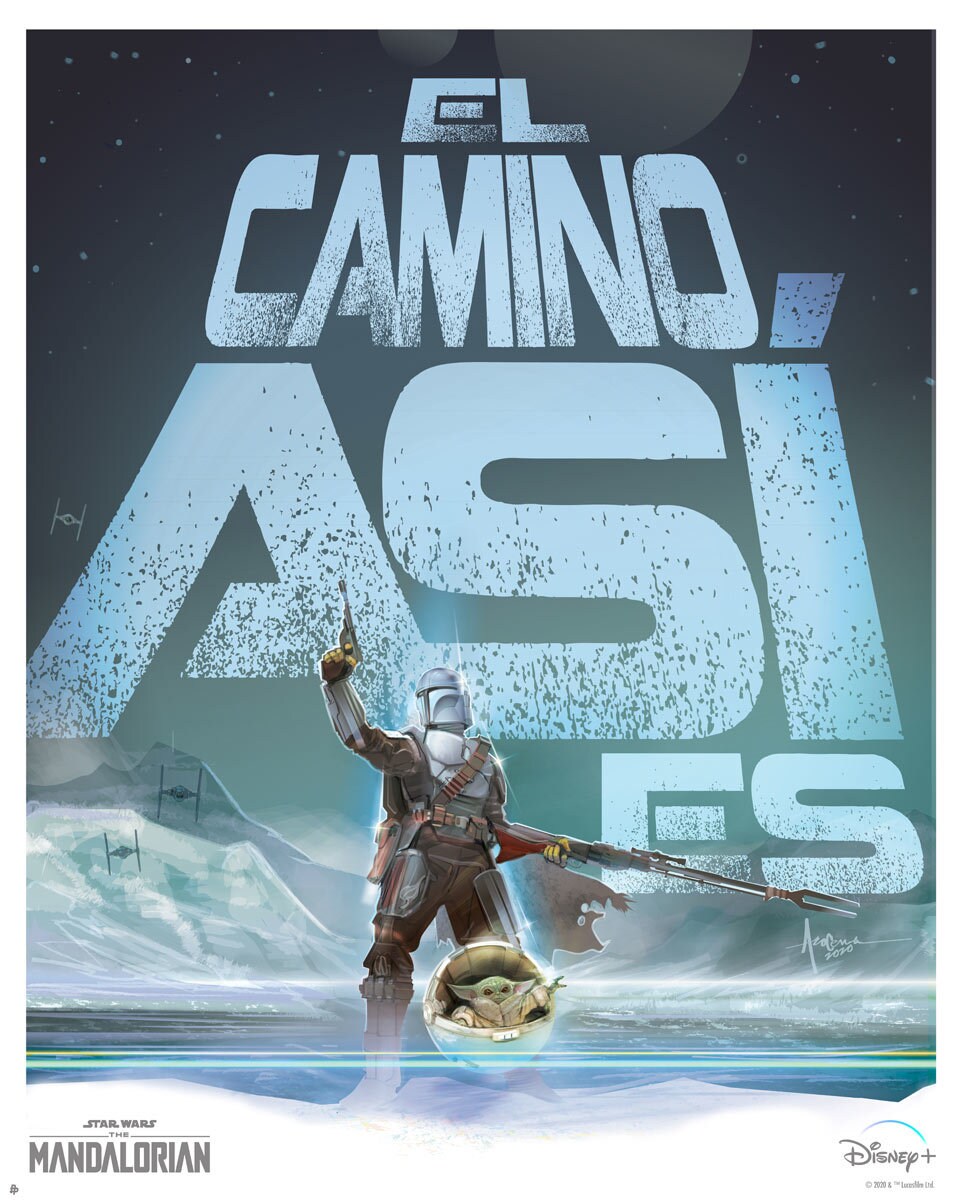 “Since 1977 I've been a Star Wars fan and, yes -- I even sent in five proofs of purchase to get my exclusive Boba Fett figure with non-threatening jetpack rocket! Fast forward 43 years and having the honor to represent South America in the multi-cultural, creative celebration for the premiere of The Mandalorian Season 2!

"The ‘El Camino Así Es’ Illustration of Mando and Child in a frost-bitten, cruel planet, while TIE fighters drop in pursuit, was a different approach than the standard heat-driven color palette from Season 1, and specifically inspired by the Season 2 trailers. I created the poster using a thousand vector points in Adobe Illustrator on my HP Z4 Workstation.

“To acquire the best amount of reference for character accuracy, help came in the form of an action figure from Hasbro’s Star Wars Black Series Mandalorian line. Many thanks to the teams of Disney+ North America, Disney+ LATAM, the Poster Posse, and all of you out there -- the true fans of Star Wars.” -- Orlando Arocena (Colombia) 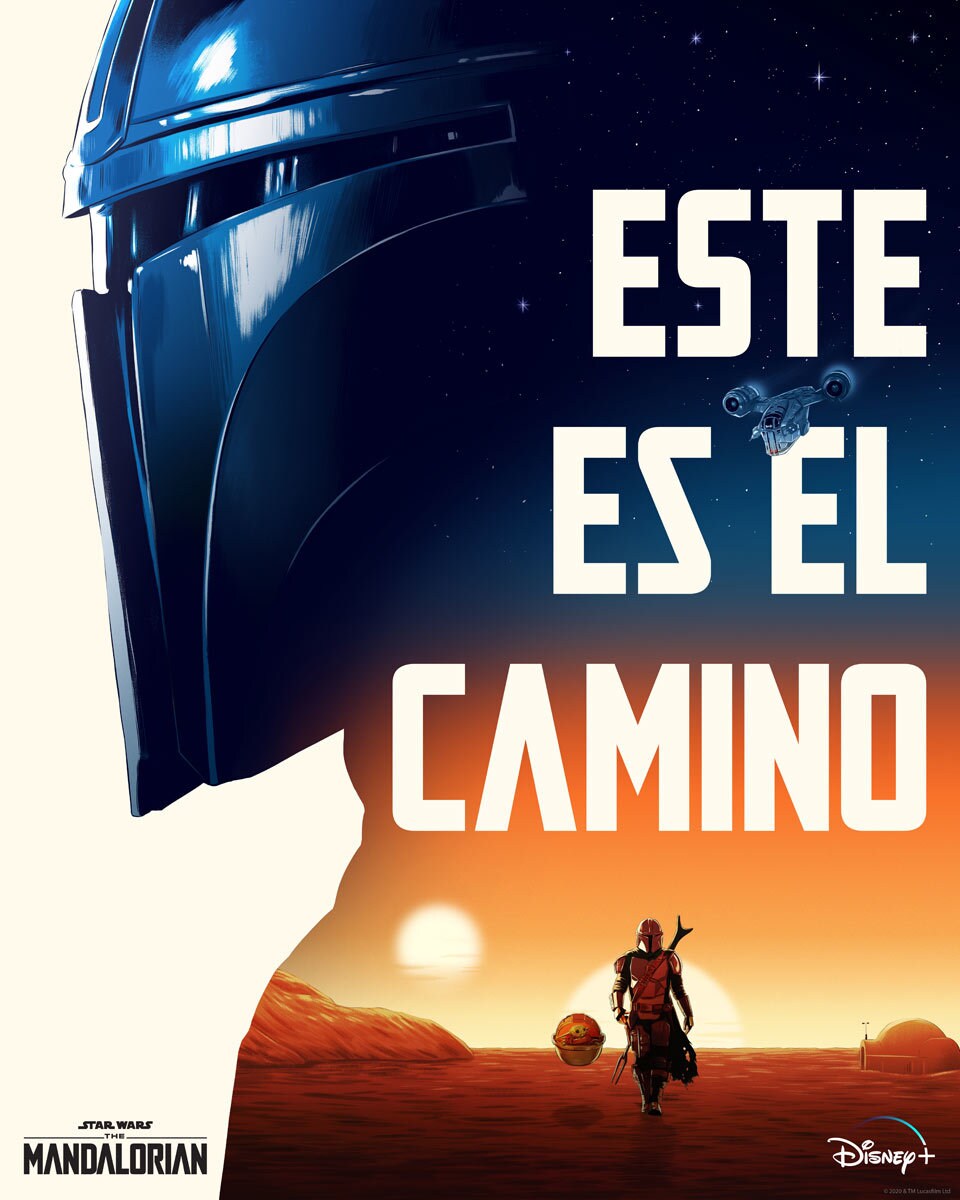 “‘Este es el Camino.’ The word camino, in Spanish, has several meanings. On the one hand, camino can be understood as the path to be walked. A way that takes us to a certain place. In a less literal sense, it can also be understood as the means that leads us to a destination. That is, camino is the direction we must take, what we must do. The way to go, definitely, and that is often a journey full of obstacles and unexpected situations.

“In The Mandalorian, the paths of Mando and the Child cross and are irretrievably united. So it seemed important to me to show both characters in the illustration, walking side by side. But, despite the importance of the Child in the plot, I though it was necessary to highlight the figure of Mando as the main protagonist of the action; that’s why the scene is located into his silhouette.

“Mando is very aware of the Mandalorian mantra ‘Este es el Camino.’ In the illustration it’s literally inside him, occupying an important space in his head. On the other hand, the image of the Child is located in the lower part, closer to the chest, since he represents the most emotional, even paternal, part of the Mandalorian.

“This is the concept that I wanted to represent in my illustration: the meaning of the camino in all its expressions. And the symbiosis between both characters, who will undoubtedly have to face new obstacles this new season. Because life is not a bed of roses or, as we say in Spain, la vida no es un camino de rosas. -- Alexandra España (Spain)