SWCO 2017: 5 Highlights from the "Heroines of Star Wars" Panel

Princess Leia started a grand tradition of female heroes in the Star Wars universe -- a brave, and scrappy young woman who could weld a hunk of junk back together, slay a Hutt, or direct a space skirmish with aplomb. But there have been several heroines in the Star Wars universe in the years since, including the initially snippy Padawan and ex-Jedi Ahsoka, voiced by Ashley Eckstein, and the artistic Mandalorian warrior Sabine Wren, voice by Tiya Sircar. During Star Wars Celebration Orlando, the pair joined Star Wars Rebels executive producer Dave Filoni for a panel on the importance of female heroes and the future of the ladies of Star Wars, including a very special scavenger guest and a sneak peek at a new series of animated shorts that will explore some of their pasts. Here are five things we learned from their talk. 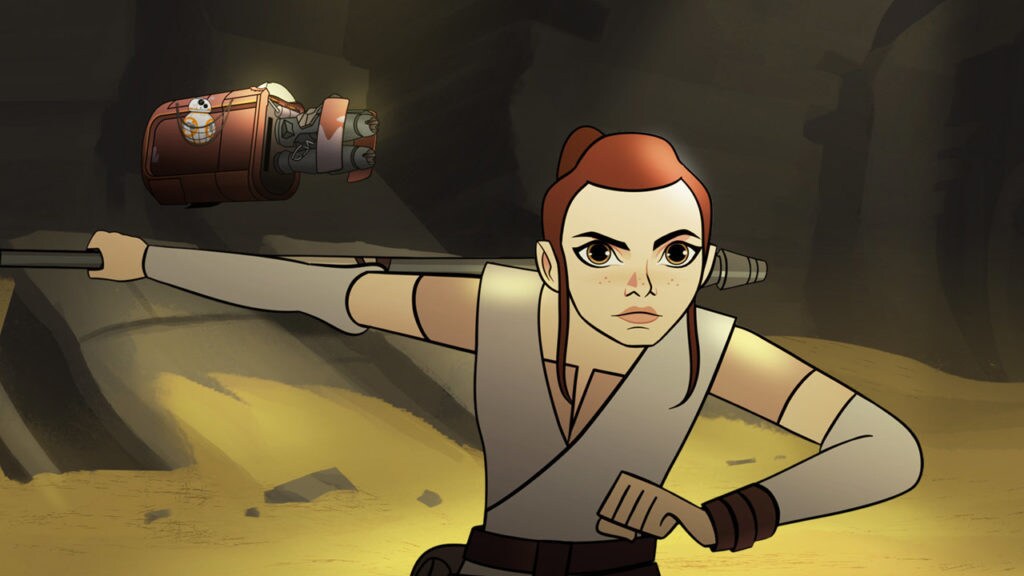 1. Worldwide premiere of Forces of Destiny!

Viewers live-streaming at home didn't get to see the short, “BB-8 Bandits,” although episodes of the new animated series are set to debut on Disney's YouTube channel this July. On Friday, the live audience saw the first clip, a new scene exploring the start of Rey's friendship with the roly-poly astromech, as she rescues BB-8 from a brush with the Teedo and whisks him away safely wrapped in the net on her speeder. The episode is brief, in a fresh style that sets it apart from Star Wars Rebels and harkens back to animated cartoons before the computer-generated age. Filoni said the shorts will focus on “everyday acts of heroism,” with existing characters like Rey, Leia, Jyn, Ahsoka, and Sabine taking a front seat. Rey's first short already delivered. As she rescues the droid from the band of junk collectors, she shows off her fighting prowess with her staff, her tactical acumen to best the group even when she's outnumbered, and her cunning in concocting a plan on the fly -- ensuring that the last Teedo on their tail will need to find a new ride before he can bother them again. 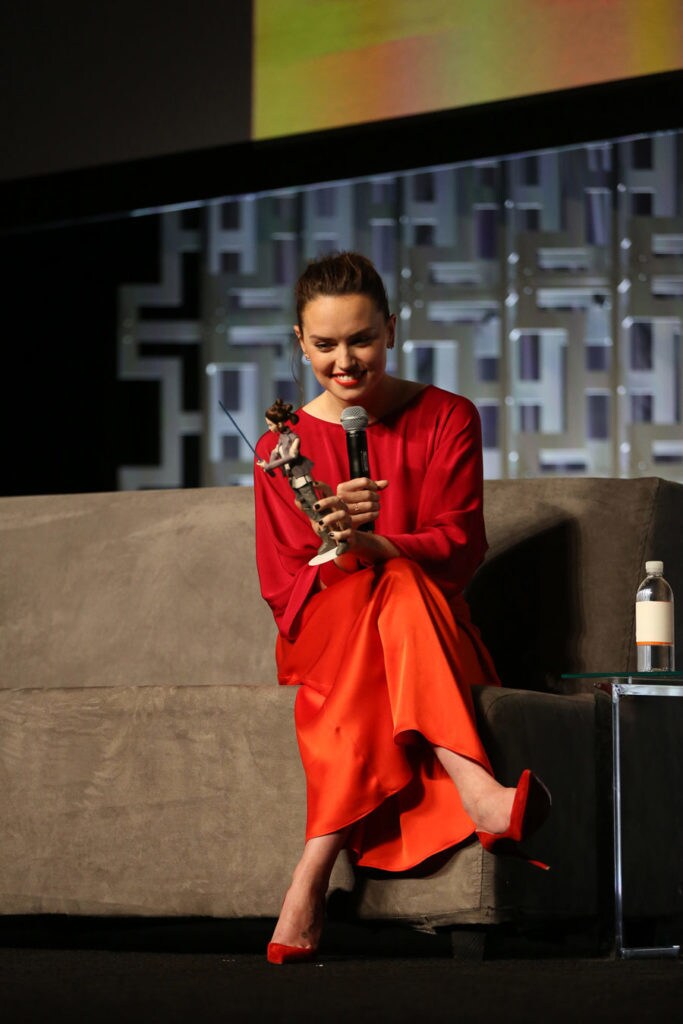 Ridley's appearance on the panel was met with uproarious applause and guests stood on their chairs to get a glimpse of the Force Awakens star live and in person. “It was very exciting doing something that looks so beautiful,” she said of the shorts, before revealing that there was one aspect that didn't thrill her. “I don't like the sound of my own voice." 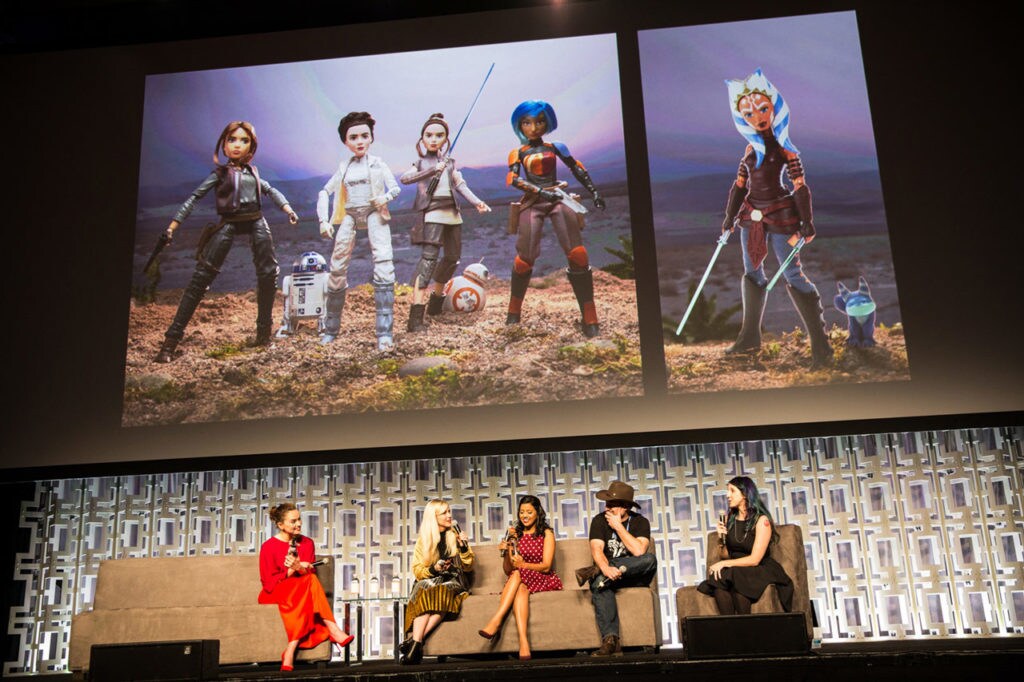 3. All the guests got to meet their plastic counterparts -- except Filoni.

The series will tie in with a new line of 11-inch adventure figures, with rooted hair and bendable joints, and the voice actors looked genuinely delighted when panel host Amy Ratcliffe brought out versions of Rey, Ahsoka, and Sabine for them to examine. “But wait, there's no little cowboy hat person!” Filoni joked when he was left out. “Now I know how it feels.”

The jabs continued with the discussion, as Filoni envisioned a world where he had his own figure but it was little more than “a peg warmer.” He would have to go to the store to comfort his tiny counterparts. “I'd be like, 'Sorry, man, seemed like a good idea at the time.' I'll be there with, like, the rancor keeper.” 4. We have to thank Sandra Day O'Connor and the goddess Athena for their influence.

While discussing important influences, Eckstein talked about growing up down the street from Disney, where her father was an employee. “And my whole childhood revolved around it.” But it was O'Connor's real-life success that empowered her to follow her dreams. “For a hot minute I wanted to be a Supreme Court justice,” Eckstein said. “She was the first female to rise to be the highest judge in the land. If she can do it, I can do it, too.” As a third grader, Eckstein even asked her mother to craft a costume to honor the honorable judge, complete “with the black gown and the gavel,” she said. “I was a weird kid,” she added, before disclosing that she was Cousin It the following year. Sircar's role models were more of the mythological breed. “This is so dorky,” she said, remembering long-ago playtime with her older sister. “We used to play gods and goddesses, like ancient greek mythology, instead of playing teacher and house like normal children,” she said. “We would fight over who got to play Athena.” 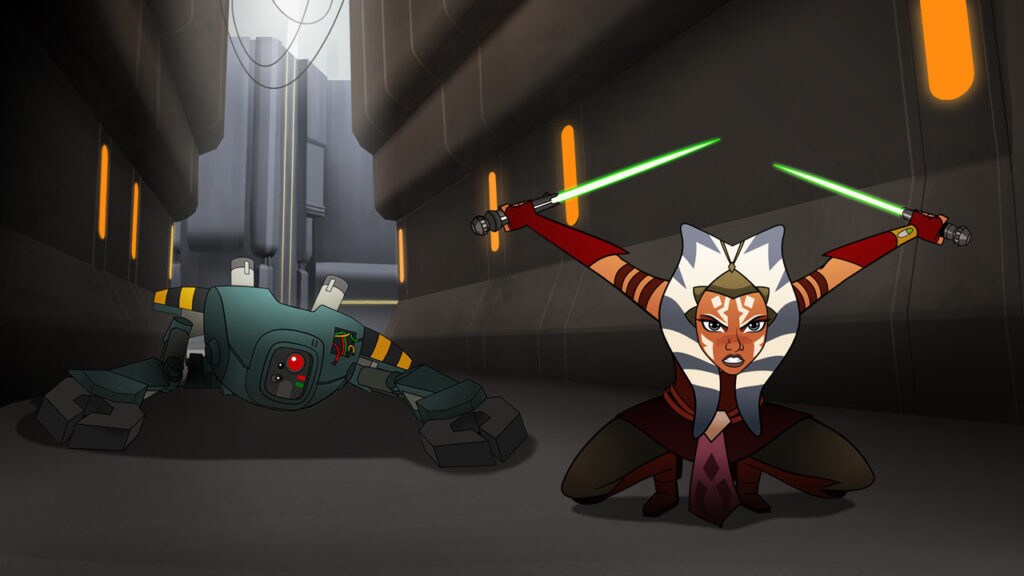 5. They're hoping one day female heroes and stars won't be such a shock.

When Star Wars: The Clone Wars debuted in 2008, it was the first time a female Jedi was one of the main stars of the franchise. “Ahsoka at the time was groundbreaking. And it shocked people,” Eckstein recalled. But she noticed that after that first introduction, her gender was never brought up again. “They've just created a strong character and I feel like people don't even see her gender,” Eckstein said. The franchise has continued to build on the idea, giving equal footing to young men and women on screen with a host of multifaceted animated characters that are strong, complicated, and cherished by the fans as much as Leia, Padmé, Rey, and Jyn on film.