The newlyweds must navigate new, difficult issues as their honeymoon begins.

With the end of the Empire came new beginnings for the galaxy and those who worked so hard to set it free. For Han Solo and Leia Organa, it was a future they would explore together, good and bad.

In StarWars.com's latest exclusive excerpt from Star Wars: The Princess and the Scoundrel, the new novel by Beth Revis arriving August 16, Han and Leia arrive at the first stop on their honeymoon cruise aboard the Halcyon starcruiser. The two discuss certain misgivings about their hosts, as well as a burden Leia now carries -- the revelation that Darth Vader was her biological father. (Before you attend the galaxy's biggest wedding, be sure to check out our previous excerpt featuring Luke and Leia, the reveal of the book's stunning cover, and a Q&A with the author.) 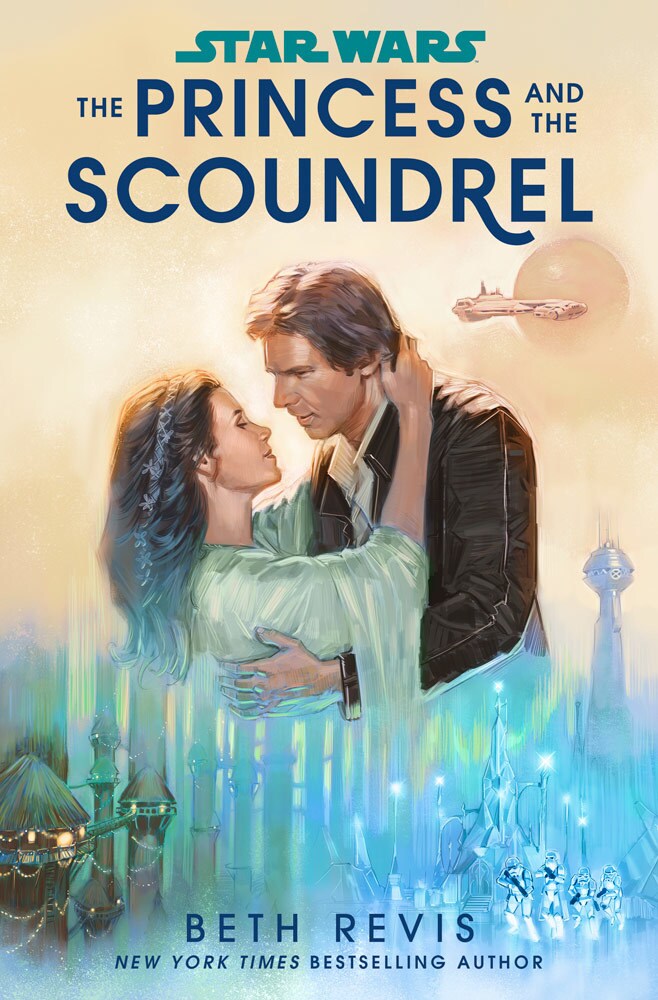 Despite being made of ice, the guest residence Han and Leia were given was luxuriously appointed, warm, and private. From the ground, the cube house looked as if it was perched cockeyed on a tube, much like the precariously warmed kistrozer glasses, but inside, the floor was flat and made of some sort of metal panel that radiated heat. The walls all angled oddly, but the sharp corners allowed prisms of rainbows to glow across the white furnishings. The city resided at the northern pole of Madurs; it would never get fully dark while they were visiting, and the gentle, hazy light cast everything in cool-toned softness.

“It’s not bad,” Han said, shrugging as he sat down on the bed. He leaned back, his boots on the white coverlet until Leia knocked them down.

“What do you think of Prime Minister Yens?” she asked, sitting down in the spot where his feet had been.

“Obviously.” Leia paused, watching a beam of light that cut through the room. “But about what?”

Han raised his hand in the air from his position on the bed, counting down with his fingers. “The black tower. The ruined palaces. The real reason he invited you here. Take your pick.”

Han snorted. Not everything had to lead back to the Empire. He didn’t bother arguing with Leia now; he knew she would never see it from his point of view. But little worlds like this, ones that could not only self-sustain but thrive enough to develop their own art and culture—they didn’t want to join any larger government, Imperial or Republic. They just wanted to be left alone.

Han could respect that.

Leia stood up from the bed and headed to the clothing stand in the corner, where two straffle cloaks were draped, waiting for them. They’d been informed that, after a brief respite, the first tour to view the ice fishing and underwater base would begin. Leia tossed one of the cloaks to Han, who let out a breath of air in an audible oof! as the heavy mate­rial hit him in the stomach.

“You do realize we don’t have to go, right?” he said, shoving the cloak to the floor.

“Come on, this is our chance to check out that black tower.”

“There’s no way he’s gonna actually take us to see that,” Han said with a snort. “Bet you he’ll take us in the other direction and then give some excuse about how we can’t go there.”

Han finally sat up. His eyes searched hers. “Do you really think the Empire has some hold here? Sure, that black tower is pretty damning, but Yens made it sound like the Empire came, and they fought them off.”

“A little moon like this can’t just fight off the whole Empire alone.”

Han shrugged. “Could have been more trouble than it was worth. And the Empire was losing its grip.”

“Not a year ago. Not while you—” Leia stopped herself.

But Han knew what she’d been about to say. Not while you were gone. He’d lost a whole year, and within a week of him waking up, both Jabba the Hutt and the Empire were dead. Everything had happened so fast—but not for Leia. Not for anyone who hadn’t been trapped in carbonite.

“It doesn’t have to be the Empire,” Han said sullenly. “Sounds like Yens just doesn’t like any overarching government.”

Leia cut her eyes at him, twisting her ring on her finger. “The new republic we make will be different.”

“Fine.” Han said, falling back on the pillows. “Let’s say there’s either the Empire or something else bad happening on this moon.” They just couldn’t catch a break. He sat up on his elbows, though. “But . . .”

“But what?” There was already a fight in Leia’s voice, as if she could guess what Han wasn’t saying.

Han didn’t finish the sentence. There was no point in saying he wished things were different, easier. They weren’t, and both he and Leia wouldn’t turn a blind eye or sit idly waiting for backup.

However, there was some emotion warring behind her eyes that wor­ried Han. He had seen her slip into a mask before when presented with someone she needed to be polite to, or a cam droid, or up on a stage.

He didn’t like that she was wearing a mask now, when it was just the two of them.

He straightened on the bed, pulling her closer. She felt so delicate in his arms, almost fragile, like a bird newly hatched, unsure of whether or not to plunge from its nest and take the first flight.

“I can’t stop now,” Leia murmured. Han didn’t answer, just rubbed a rhythmic circle against her back. After several small moments, Leia added, “I have to do as much as I can while I can.”

That made him stop. “While you can?” The wording made it sound ominous, and Leia’s defeated shoulders and low head only added to that.

She twisted around in the bed to meet his eyes. “Not everyone in the galaxy is like you,” she said.

Han smirked, reclining on the pillows so that Leia could get a better view of all he had to offer. “Why, thank you.”

That actually got a laugh out of her, but a grave shadow passed quickly back over her countenance. “I meant that not everyone will take the news of my, er, parentage as well as you did.”

Han blinked a few times. He had to remind himself of what Leia meant. When she’d first told him that Vader was her father, it had been so preposterous, news given to him so suddenly and after the rush of her acceptance of his proposal that he’d mostly put it out of his mind. Leia, linked to Vader? That was impossible. It didn’t make logical sense. So his brain had shifted it away, sidelining the truth so completely that he’d been able to ignore it.

That had been a mistake.

Not only had Han not seen just how heavily this information contin­ued to weigh on his wife, he’d also not allowed himself time to accept the truth.

Nothing like repression to rear its ugly head at the worst moment. Han forced the thoughts back down. Again. As much as he could.

“It matters,” she stated flatly. “Once the galaxy knows my secret, peo­ple will see me differently. It will limit what I’ll be able to do to help others; they’ll question, at the very least, my motives.” Leia had a dis­tant look in her unfocused eyes. It reminded Han sharply of the way she’d spoken about Luke, just after the second Death Star had been de­stroyed, the certainty with which she’d known he had survived.

That look put Han on edge. It spoke of unknowable things, of that strange way Luke had turned from a kid to a Jedi, and Han didn’t like it one bit. It made him feel as if the entire galaxy was passing him by, like he was stagnant while everyone else went into hyperdrive.

But when Leia’s gaze centered on him, he saw only fear inside her. And somehow, that was worse.

A part of Han wanted to kiss her worry away, to make her forget about whatever was causing her such trouble. And he knew instinctu­ally that she would let him. Ice fishing and tours be damned; if Han scooped Leia up and tossed her down on the bed, he was certain she would let him distract her from the dark thoughts troubling her now.

But he couldn’t do that. Not to her.

Leia closed her eyes. “I have to do as much as I can, while I can,” she repeated. Leia let out a defeated breath. “A secret like this, it cannot be hidden forever. So if there’s something I can do, I have to do it. Now. I can’t stop doing my job,” she continued, speaking quickly, as if her words were a confession. “I can’t stop helping others. I can’t just quit being myself. And part of it is because this is the way I believe I should live my life. This is the work I love. And part of it is because I have to keep the guilt at bay. I commanded the battles. I knew people would die—good people—and they did.”

It was a war, Han wanted to say, but he was too afraid that his words would silence hers.

“But also, I know I will no longer be trusted if . . . once people know. If I have a position in the new government, it will be recalled. Any work I’ve done will be criticized, possibly dismantled. I’ll lose everything.”

“Except me.” The words slipped past Han’s lips before he could even process the thought, but he saw the way Leia looked at him, the hope rekindled in her eyes. “Face it, sweetheart, you’re stuck with me.”

She laughed again, the sound sweet and true.

“But,” Han added, “it seems to me like you’re wasting all your pre­cious time worrying about the future. Maybe the galaxy finds out. Maybe it doesn’t. Right now, we have a prime minister to work around so we can find out what that damn black tower is. One thing at a time.”

He didn’t want to dismiss Leia’s thoughts too much; it was clear this truly worried her. But Han wasn’t bothered. Leia, he had no doubt, would rise above any challenge. And he knew better than most that it was possible to reinvent yourself beyond your past.