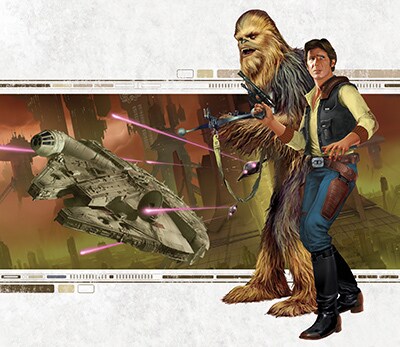 I love board games and video games, but I’ve never tried my hand at traditional roleplaying games before. The closest I’ve ever gotten to it was when I was a teenager, seeing my younger brother and his friends sit around our dining room table with books and notebooks and dice and thinking the entire enterprise looked complicated and boring. (And nerdy. I was at an age where I actually cared about that sort of thing.) I never really gave it much thought beyond that.

So when I found out that I would be serving as editor here at Lucasfilm for a comprehensive new Star Wars roleplaying game system from Fantasy Flight Games (beginning with Edge of the Empire), I was nervous. Even as a Star Wars fan, this didn’t seem like something I could relate to. But I’m always up for a challenge (plus, you know, it’s my job), so I dove in, not sure what to expect. Hundreds of pages of submitted material later, I realized that I was experiencing a real respect for those who play (and design!) RPGs.

For one thing, you have to keep track of a lot of information to play this kind of game effectively. There are different playable species, all of which have different career paths, motivations, and skills. You have to know how the world you’re playing in works (luckily, if you’re a Star Wars fan, you’re already slightly ahead of the game, here). You can choose from plenty of different spaceships and weapons to augment your playing reality, as well as a large selection of gear and equipment. This is all really impressive to someone like me; I tend to prefer games where all I have to do is shoot things. (http://www.smiliegames.com/galaga/).

But what really impresses me about RPGs is the breadth of imagination involved. For one thing your playable character needs to be a fleshed out being, with a backstory, personality traits, talents, and desires. Then you and your game partners have to create detailed scenarios that play out blow by blow, and all of the action is happening on the stage of your own imagination. What happens when that bounty hunter starts shooting at you? What does the cantina you just entered look like? What approach will you take when bargaining with a Hutt? (Protip: Don’t trust the Hutt any farther than you can throw him.) It doesn’t surprise me that quite a few successful writers started out playing (and often continue to play) RPGs. It seems like an excellent training ground to hone storytelling skills.

So I’m indebted to the folks at Fantasy Flight for opening my eyes to just how much dedication and imagination goes into this kind of game. Now if you’ll excuse me, I have to go apologize to my brother...

Jennifer Heddle is the senior editor for adult fiction (both novels and comic books) at Lucasfilm. A 15-year veteran of the book publishing industry, she  now gets to obsess about Star Wars full-time. You can find her on Twitter at @jenheddle.