"You must have Jedi reflexes if you race pods."

Star Wars Inside Intel is a StarWars.com feature where Lucasfilm Story Group member Emily Shkoukani, whose job is to know as much about a galaxy far, far away as possible, explores obscure facts about Star Wars lore and continuity. In this installment, Emily breaks down everything they know about podracing…

The high-speed sport of podracing swept into the Star Wars galaxy with its exhilarating debut in 1999’s Star Wars: The Phantom Menace. The Boonta Eve Classic showed off the trappings of podracing from the captivating array of pods, to the unrelenting track, and the arena’s stands of some 100,000 spectators excitedly cheering and irresponsibly betting. Although podracing has been featured minimally in Star Wars since The Phantom Menace, a bounty’s worth of lore was created to make such a thrilling sport.

The objective is simple -- win the race. Course markers line tracks like the Boonta Eve arena, signaling to a podracer’s navigational system the route to follow. A racer wins after completing three laps around the course, and crossing the finish line first. But what makes podracing exciting is the danger of it all, which is why it’s a mostly outlawed sport within the Republic (and later, the Empire, all the way to the New Republic), but thriving in the Outer Rim. Although there are rules and regulations, they’re treated more as guidelines. Officials and referees exist but even they are easily bribed, threatened, or distracted by pilots and their crews to circumvent the “guidelines” they’re intended to enforce.

Galactic history explains that podracing was inspired by a more primitive version of the sport where carriages were drawn by creatures, who would race around a track for glory. This sport transformed into the dangerous, high-speed competition seen in The Phantom Menace after a mechanic called Phoebos applied the same arrangement of carriage and creature to modern technology, replacing the carriage with a pod and the creatures with engines, and using repulsorlift technology so the vehicle could hover. 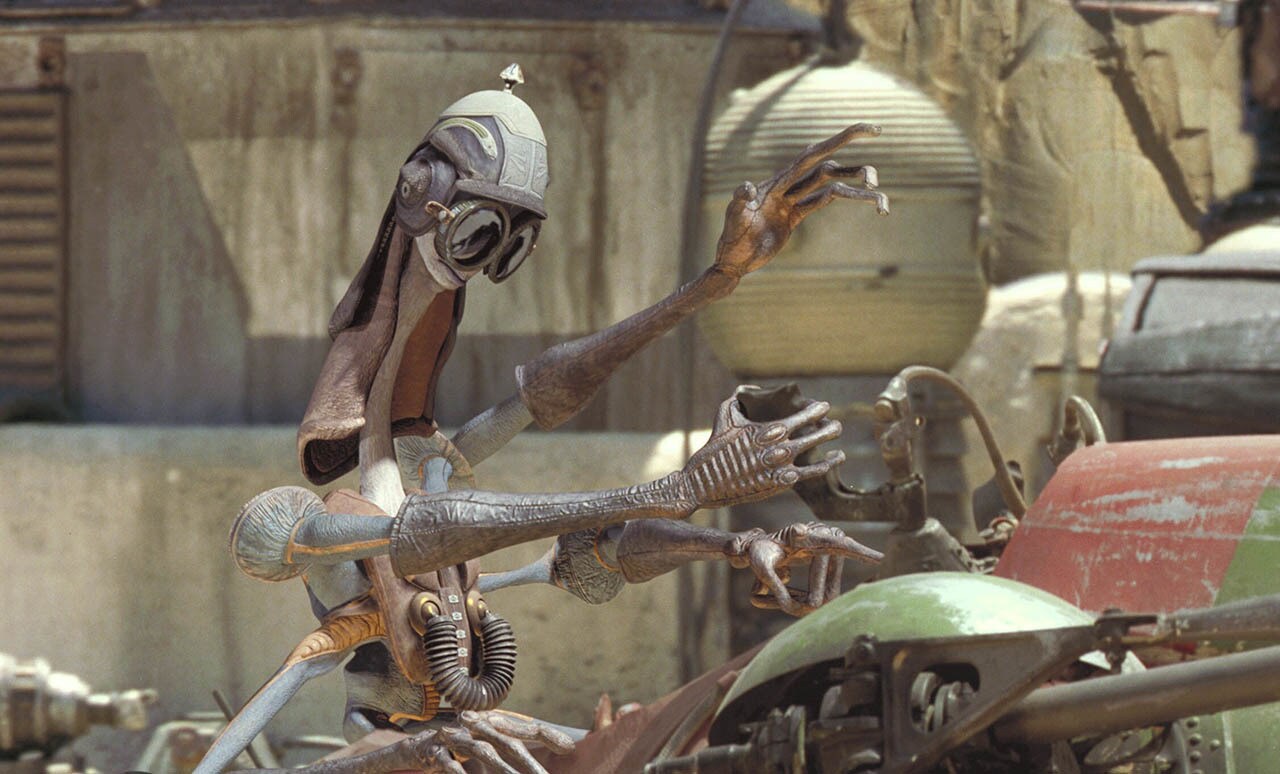 Podracers are generally designed for the pilot which, in Star Wars, also means keeping in mind the species piloting. The spindly Xexto Gasgano used four arms consisting of 24 fingers to operate his exceedingly complex pod, maintaining the engines, running diagnostics, tracking other racers, and more, all while piloting.

The engines vary in design just as much as the cockpits. Different engines offer different benefits. Sebulba’s split-x radiators gave him a top speed of over 829 kph (515 mph), and he often used their massive size to bully other racers, smashing into smaller pods to throw them off course or into a hazard. While Sebulba could pay for a pod that would guarantee him a win, Anakin Skywalker had to cobble together salvaged materials for months to build his pod. 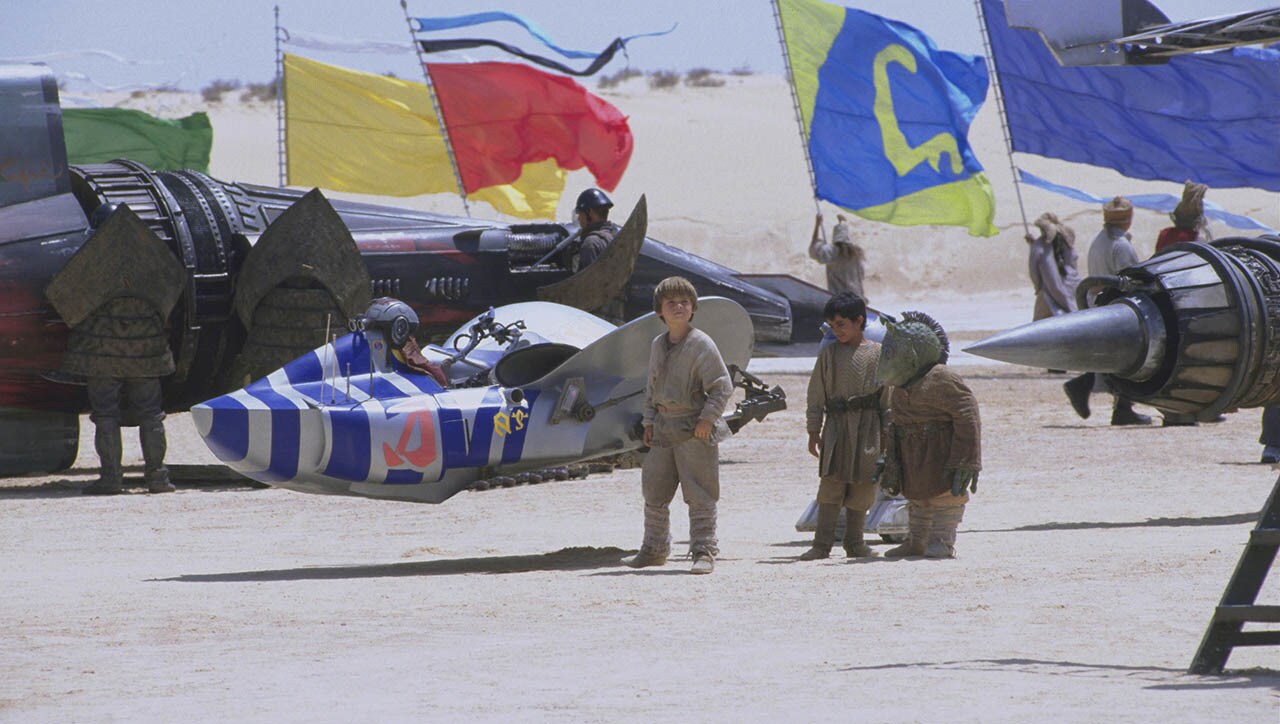 Anakin’s small pod was powered by two Radon-Ulzer engines, which he smartly modified for impressive maneuverability and speed. Each engine was outfitted with triple air scoops (the prongs jutting out from the turbines) that allowed the young pilot to easily weave through obstacles and make sharp turns. And by re-wiring and installing new subsystems, Anakin made it so that a maximum amount of fuel could be injected into his engines for the maximum amount of thrust. Thus, his pod is supposedly the fastest to ever race in the Boonta Eve Classic, zipping through the track at speeds up to 947 kph (588 mph), over a hundred kilometers per hour faster than Sebulba’s pod. But the tactics for winning this unforgiving race don’t always come down to just speed.

Anything goes in podracing. It’s not uncommon for pilots and/or crews to sabotage other racers prior to or during a race. The dimwitted Nuknog named Ark “Bumpy” Roose attempted to sabotage Anakin’s pod prior to the race, only to cripple Ben Quadinaros’ instead. Assassination attempts, exacting revenge, and bribery are all part of the sport. Many pilots even equip their pods with weapons or make illegal modifications to get an edge on other competitors. In a deleted scene from The Phantom Menace, Sebulba’s pod shoots fire at other racers from his flame jets. There’s a general disregard for life when it comes to podracing, and pilots competing in such races understand that at any moment, it could all be over for them.

Often overlooked, podracing couldn’t be done without the mechanics that make up the crew. Since podracing’s break-neck speeds exempt almost all humans from competing in the sport itself, it’s common for them to instead join a crew, taking great pride in the work they do. But the more recognizable crew members are the comical pit droids. These small droids are programmed to have a sense of urgency but their minimal logic processors prevent them from performing complex jobs. They’re largely used to make simple wire connections, reach tight places, and refuel ships. If given a task too complicated or outside of their ability, instead of asking for help the droids will come up with often hazardous solutions such as balancing on each other to reach somewhere. Their inability to logically problem-solve, combined with their programmed haste, typically results in some type of accidental entertainment such as when one was sucked through Ody Mandrell’s turbines. Luckily for these diminutive droids, they’re incredibly durable so such an incident caused minimal harm (but maximum damage to the engines).

By the end of the Boonta Eve Classic portrayed in The Phantom Menace, only six racers crossed the finish line out of the 18 that competed. Some perished during the event, like Ratts Tyrell’s unfortunate end in the Laguna Caves, others were deterred by external forces like Teemto Pagalies, who crashed his pod after being shot at by a Tusken Raider, and one, Neva Kee, remains to be accounted for after flying off course to utilize a shortcut -- they were never seen from again.