Discover the history, features, and meanings hidden within the iconic armor.

Star Wars Inside Intel is a StarWars.com feature where Lucasfilm Story Group member Emily Shkoukani, whose job is to know as much about a galaxy far, far away as possible, explores obscure facts about Star Wars lore and continuity. In this installment, Emily covers what we know about Mandalorian armor…

Mandalorian armor has been dazzling audiences since Boba Fett’s first on-screen appearances in The Star Wars Holiday Special and Star Wars: The Empire Strikes Back, as the mysterious bounty hunter looked undeniably cool in beskar, his now-iconic t-visor helmet, and, of course, a jetpack. It’s no question why this “first” Mandalorian became a fan favorite. Over 40 years on, we’re still learning more and more about Mandalorians and their armor.

A fun fact about Boba Fett is that the character was originally meant and designed to be a “super commando” affiliated with the Empire, and his armor was originally white. The origins of the term "Mandalorian" are a little murkier, however. It first appeared in 1980's The Empire Strikes Back Sketchbook, but Joe Johnston, designer of Boba Fett, has no memory of “Mandalorian” being used during production of Empire. Still, the idea took hold and was carried on into the Expanded Universe (now known as Legends, and not part of current continuity) in Marvel’s Star Wars #68 (1983), which sees Leia go to Mandalore after Han has been frozen in carbonite and handed over to Boba. In the comic, Leia learns that there were Mandalorian commandos that worked with the Empire during the Clone Wars, but only a few (including Boba) remained.

Years later, Lucasfilm would develop Mandalorian culture and the importance of its armor in current continuity via Star Wars: The Clone Wars, Star Wars Rebels, and The Mandalorian.

Aside from looking cool, Mandalorian armor had both a practical and cultural significance to its wearer. Mandalorian armor was generally made with beskar, a durable alloy capable of deflecting blaster bolts and withstanding lightsabers. Although beskar had been used to forge armor for some time, it was not until after the Great Purge of Mandalore that the metal became scarce, as Imperials stole the beskar in the aftermath. In The Mandalorian, Din Djarin is rewarded with Imperial-embossed beskar after completing a bounty, and takes the camtono full of metal to his covert of Mandalorians. There, the Armorer of his tribe forges the beskar into pristine armor and whistling bird projectiles, while donating what’s left over to the Foundlings -- a new generation of Mandalorians. Later, Djarin would also ask the Armorer to forge a gift made of beskar for Grogu: a chainmail shirt. 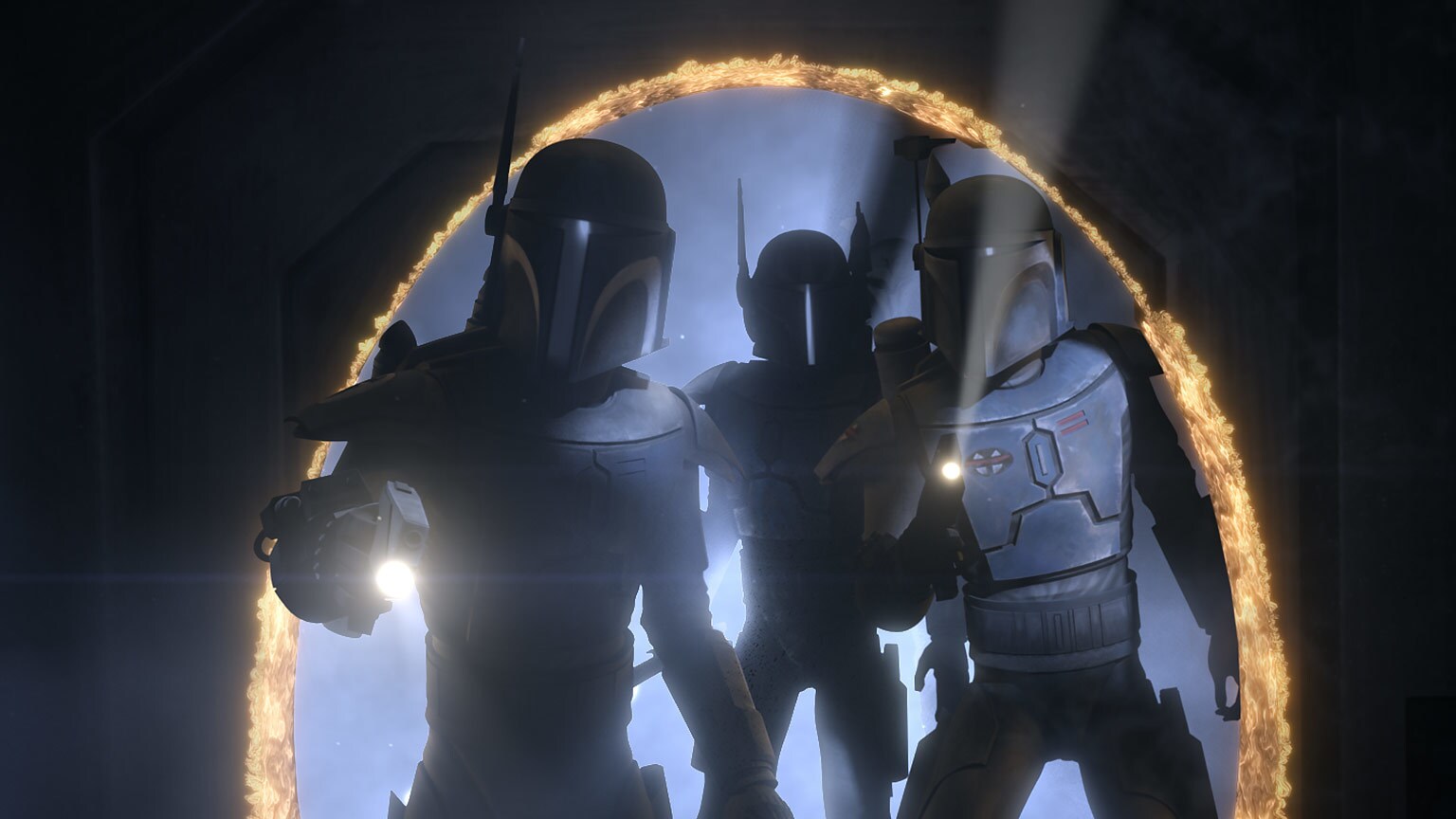 Mandalorian armor could be forged and decorated in many different ways, and generally correlated to the Mandalorian’s affiliated clan. (In Mandalorian culture, families were referred to as clans.) Clan Wren’s armor was crisp white with yellow outlines, while Clan Eldar’s armor was gray and orange. A splinter group of Mandalorians called Death Watch were known for their blue-accented armor, until Maul’s Shadow Collective entered Mandalorian politics. Death Watch fractured with the weight of a pending civil war on Mandalore, with half the group pledging their allegiance to Maul. These warriors were known as Mandalorian super commandos, and their armor changed to reflect their new leader, swapping the blue with crimson red -- and some helmets featured horns. Despite all the variances in armor, Mandalorians could easily be identified based on a few simple details including the small hexagonal design on their chest plates, and the t-visor helmet.

In addition to color variations, clans were known to have a signet -- a symbol incorporated into their armor. Boba Fett sports a mythosaur on his shoulder pauldron, though as he does not identify as a Mandalorian, it's a mystery as to what this signifies for him. After forming a bond with Grogu, Din Djarin and the child were deemed a clan of two and bestowed the mudhorn as their signet, in recognition of the one they killed on Arvala-7. And Mandalorian armor can feature other types of marks and designs; Lady Bo-Katan Kryze's helmet incorporates the face of an owl.

With such a cultural significance, Mandalorians wear their armor with pride. Even Sabine Wren, who had been outcast from her clan, still wore her flamboyant armor as she forged her own path in life. And it’s no wonder why Boba was willing to dive through the acidic gut of a sarlacc to search for his armor.