Star Wars in the UK: The Amazing Vintage Ads, Comics, and Posters of Star Wars Weekly #4

In this issue, readers can order Star Wars kites, learn what a "persec" is, and more!

February 29, 1978. That was a leap year, wasn’t it? Nope. 1976 and 1980 were leap years, so why does the cover boldly state: "No. 4, Feb. 29, 1978, Every Wednesday"? Simple, someone made a mistake. The correct cover date should have been March 1, 1978, but hey, who’s counting? We’re about to embark on an intergalactic adventure with the galaxy’s greatest heroes in a four-color frenzy (well, this is a UK comic so it’s mostly black and white) that’s truly out of this world.

Speaking of the world -- you know, the real world -- Ted Bundy had just been captured, The People's Republic of China lifted bans on works by Aristotle, William Shakespeare, and Charles Dickens, Rhodesia (better known these days as Zimbabwe) vowed to push for multiracial democracy within two years, and the Great Pyramid of Tenochtitlan was found in Mexico City. But, as the mighty Queen said that week at no. 40 in the Hit Parade: spread your Wings and let’s see what’s inside. 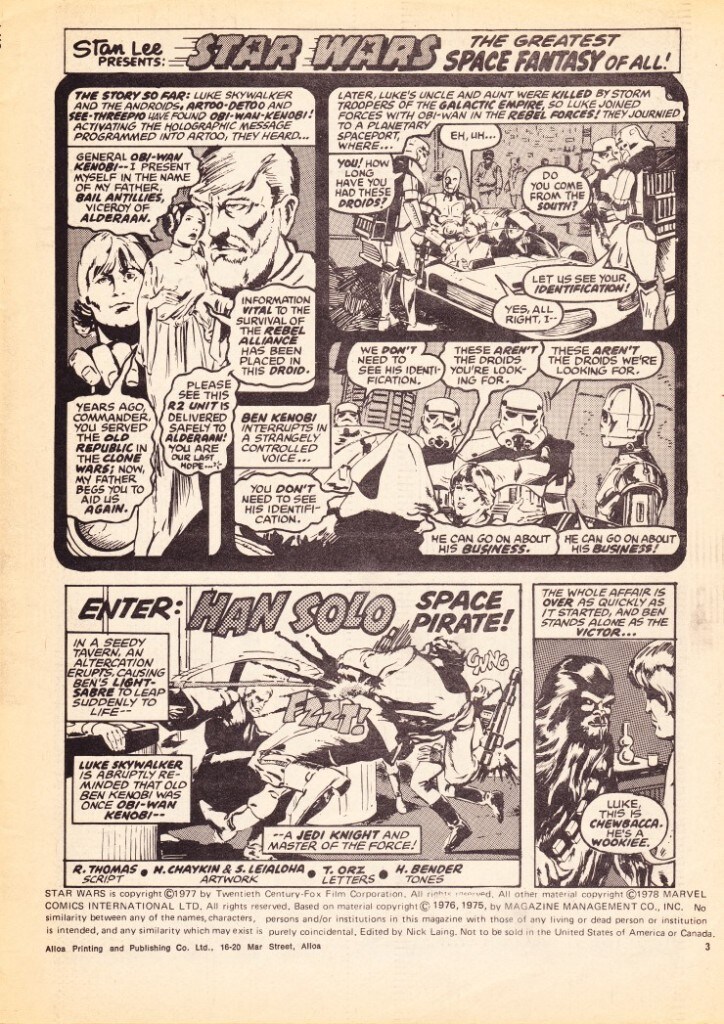 First off let’s check out the cover. It will come as no surprise to see that the image on the cover bears only a passing resemblance to a scene in the actual movie. Here we have a frantic Han Solo yelling “We can’t outrun them!” while Ben Kenobi points out that “The Star Destroyers are too fast! They’ve overtaken us!” (And apparently had time to do a 180 so they are facing the right way to shoot at them.) Again, it’s our young hero Luke -- with grains of sand still between his toes -- who bravely yells “Then we’ll fight -- to THE LAST MAN!” While it might seem comical to misrepresent the characters so wildly these days, it was common practice back then to ramp up the hyperbole to 11. Anything to grab the attention of a kid with pocket money burning a hole in his or her pocket was fair game.

The inside cover has "Who’s Who In Star Wars," giving us our regular rundown of the major players so far. No need to repost it again this time around, but next issue there will be some new additions as the "Who’s Who" stayed abreast of the major characters as they entered the story. It’s also telling to see Biggs here, a character who was far more central to Star Wars in earlier drafts and even during the shooting phase of the movie. Editorial decisions meant that Biggs ultimately took a backseat in the final film, but kids of the time did -- and still do -- consider Biggs a key character and a prime motivator in Luke’s wider development from farm boy to Rebel hero.

A  story recap takes us back to Luke and Ben watching a holographic Leia imploring Ben to come to the Alliance’s aid, and ends with our heroes dodging Imperial attention before entering the cantina. Then we reach that tagline -- "Enter Han Solo Space Pirate!" Back in 1977-78, the character of Han Solo was viewed through very different lens. Today we look at his redemption arc, how his romance blossomed through hard times with Princess Leia and transformed him from a cynical smuggler into a good man. But back when all we had was that first film, he was regarded as a pirate -- roguish, in it for himself, and popular with the ladies (cue the deleted "Jenny" scene from the cantina). And he definitely shot first. Here was a character who could look after himself and knew all the tricks of the trade. Perfect for what Kenobi had in mind.

The issue also featured the infamous fake Jabba the Hutt. On set he’d been played by the late Declan Mulholland, who was supposed to be replaced by a stop-motion character (of course, this wasn't possible until the Special Edition 20 years later). But in the pages of the comic, he was a long-faced, black-eyed character in an Imperial uniform. Retconning would change that character to Mosep Binneed, but for now this was our Jabba the Hutt.

To satisfy the general public clamoring for anything they could lay their hands on from the film, a number of licenses were granted for "quick win" items -- products that would put the Star Wars logo, name, and brand "out there"’ as quickly as possible. Buttons, decals, patches, posters, and iron-on T-shirt transfers were just some of the products that could be found in the pages of Star Wars Weekly. Here we see an ad by Junequest offering a variety of products that couldn’t be more 1978 if they tried -- two-inch badges and long sleeve T-shirts that were available in red, white, navy, and light blue.

The weekly comic mined the 95-page Star Wars Collector’s Edition heavily for content, bringing behind-the-scenes details to the many kids buying the magazine. For the first time, youngsters were given the chance to read about the lives of not only the stars of the film, but the creative minds making it. Before Star Wars, most kids were unaware of these details, leaving the cinema before the credits had barely begun to roll. After Star Wars, many kids stayed to the very end.

Here we take a look at the life and career of young 21-year-old Carrie Fisher. Most famous for being the daughter of the legendary movie star Debbie Reynolds, Fisher acted in only a handful of projects and was still finding her place in the world, but her acerbic wit was already fully operational. “I wanted to do the role of Princess Leia because I wanted to have real conversations with people with bubbles on their heads,” said Fisher. The Star Wars adaptation ended with what is likely the trippiest representation of hyperspace put on paper so far, as we prepare to visit the Death Star in the next issue.

Competitions were the norm in weekly magazines of the day, giving kids the chance to win a vast array of prizes. In Star Wars Weekly no. 4, the prize was a 150-piece Star Wars jigsaw puzzle from Waddington House of Games. They retailed at the time for 99p, but if you could match up the pair of identical Artoo Detoos, then you had a chance of winning (but only if your entries were in by March 31, 1978, which was my seventh birthday). Kids of the '70s fondly remember Outer Spacers, though if they tasted them today those golden memories might be somewhat sullied. Coming in Beefburger, Chutney, and Pickled Onion flavors, they were a corn-based snack costing 5p, and given their stellar nature were a natural fit to have in a Star Wars promotion. All kids had to do was collect three wrappers and get Mom or Dad to write a check for 95p made payable to "KP Fighter Kite," and you could be swooping your vinyl fighter kite around the local park. Another example of a "quick win" product, these are still occasionally seen today and are hugely evocative of the era. 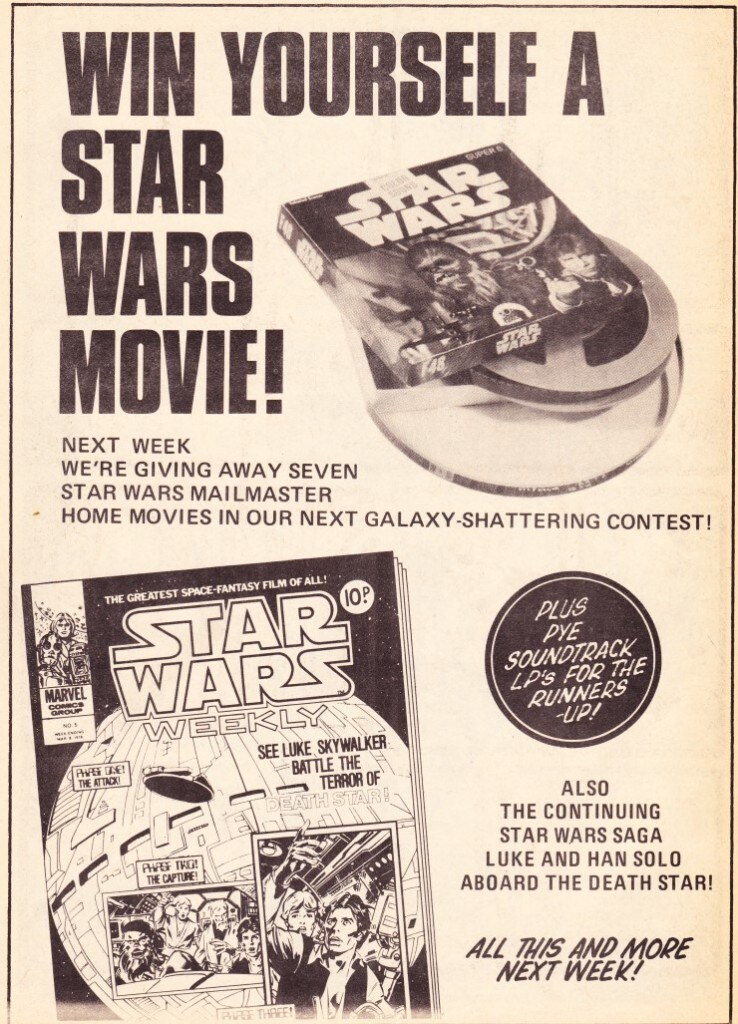 "WIN YOURSELF A STAR WARS MOVIE!" That was the promise for kids who bought the following issue, as Marvel UK were giving away seven copies of the Star Wars Mailmaster Home Movies (Runners-up received copies of the Pye soundtrack LP). It was a common example of enticing the readers to come back for more, but who could resist that? Apart from anything else, the adaptation hadn’t even got halfway and here was a chance to win a portion of the actual film! "Tales of the Galaxy" takes up a significant portion of the issue, with "Wartoy" written by Tony Isabella of "Black Lightning" fame, and George "Crisis on Infinite Earths" Perez handling the art alongside Rico "Legion of Monsters" Rival. It told the tale of a war robot built for battle, but consigned to the scrap heap until an alien invasion gave it a chance to prove its worth.

Issue no. 3 brought the first glossary to the inside back page of the comic, and issue no. 4 didn’t disappoint with a second run through key phrases, characters, and vehicles. Once again it’s littered with common errors of the time, but thankfully there’s not a Hans Solo or Darth Vadar in sight.

The Old Republic is described as ‘The governing body of the Alderaan star system that began to lose its grip when the Imperial Empire came into power." A "persec" is correctly identified as a measurement of distance, while "See Threepio" is described as "an android made of gold’ who "can understand over a thousand intergalactic languages." (This is underselling him somewhat.) Tatooine is "a neutral planet in the rebellion," and finally we have two spelling errors: "Wookee" and "X-fighters." 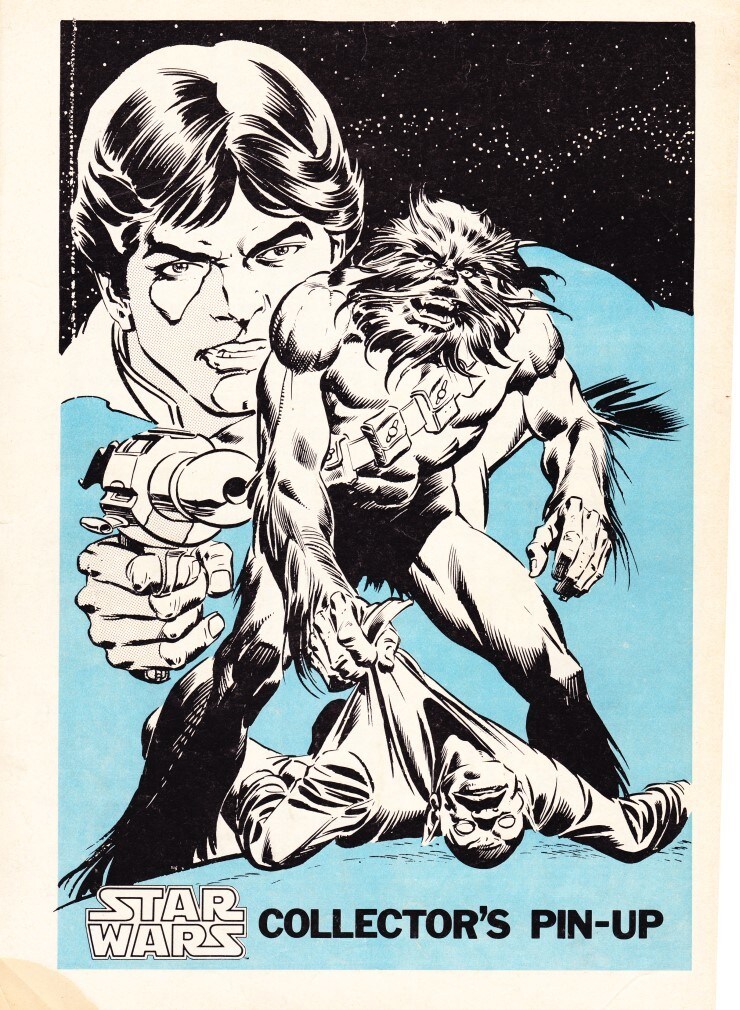 We round off the issue with another Star Wars Collector’s Pin-Up. No artist is attributed to the artwork (though it appears to be another Tony DeZuniga piece), which shows a muscular Chewbacca finishing off an alien adversary with Han Solo and a very '30s style blaster looming over him. Classic sci-fi aesthetics meets the galaxy far, far away.

The adventure continues the following week with issue no. 5 of UK Star Wars Weekly. Be sure to come back and check it out.

Mark has contributed to Star Wars Insider for almost a decade, is the owner of Jedi News, writes for the UK’s largest free newspaper The Metro and DeAgostini's Build The Millennium Falcon magazine, and co-hosts RADIO 1138. He's an honorary member of the UK Garrison, a friend of the Rebel Legion, and when he’s not talking, tweeting, or writing about Star Wars he can usually be found sleeping, where he’ll most likely be dreaming about Star Wars.