This issue had it all, including a pence-powered TIE fighter!

Back in March I took a close look at the very first UK Star Wars Weekly comic, dated February 8, 1978. The Marvel release helped thousands of kids across the UK take their first step into a larger world. With Star Wars in wide release across the United Kingdom, the arrival of the comic (along with the long overdue Palitoy 3 3/4-inch action figures and Sphere's release of the novel) propelled Star Wars from mega hit to cultural icon. In 1978 there was no escape from the galaxy far, far away. Even the pop charts had a galactic feel. Wishing on a "Star" by Rose Royce was at No. 11, "Mr. Blue Sky" by ELO was at No. 16, "Galaxy" by War was at No. 17, and "Who's Gonna Love Me" by The Imperials was at No. 20. Iron-on T-shirts had images of Han Solo and Chewbacca. The vinyl soundtrack was selling out everywhere and the queues just kept going on and on around the block.

Hop forward a week to February 15 1978 and the release of the second issue of Star Wars Weekly. What cosmic treats would it have in store for a legion of Star Wars fans hungry for more? We launch right into the action as soon as the cover is turned. Sitting behind is a classic Marvel Collector's Pin-Up featuring Luke, Han, Vader, and our two heroic droids. The "Who's Who In Star Wars" page that followed may seem perfunctory in 2015, but back in 1978 this was fried gold as so little information was out there about our lead characters. We learn that "storm troopers" (yes, they broke the word in two) were "the drones of the Galactic Empire," feeding right into the knowledge of the time that they were clones (indeed, issue No. 4 of the Star Wars poster magazine goes into great depth detailing the birth and life of a cloned stormtrooper). Princess Leia is described as "the unifying force behind the growing rebellion against the evil Galactic Empire" while Vader is described as "the dark Lord of Sith." It was an innocent time when Ben called Vader "Darth" like it was his first name and the only additives in blue milk were the cookies you dipped into them. Star Wars is also largely responsible for folks staying right up to the end of the credits. Not in the manner that people do these days -- waiting for an end of credits sting -- but to listen to the sumptuous music and learn more about the creative minds who magicked up this visual and audio feast."Who's Who" handily included a truncated rundown of the cast and crew, and it was here many kids first read the names of Production Designer John Barry and Director of Photography Gil Taylor. We also learned that the music was by John Williams and that Gary Kurtz was the producer. ILM had yet to be formally and publicly recognized as a special effects company ("special effects" not "visual effects"), and so miniature and optical effects were credited to John Dykstra and mechanical effects were credited to John Stears. Finally, we had the three editors who so magnificently pulled all the disparate elements together: Marcia Lucas (then wife of George), Richard Chew, and Paul Hirsch.

And before we leave this page, note the printing location of the comic was in Alloa, Scotland. 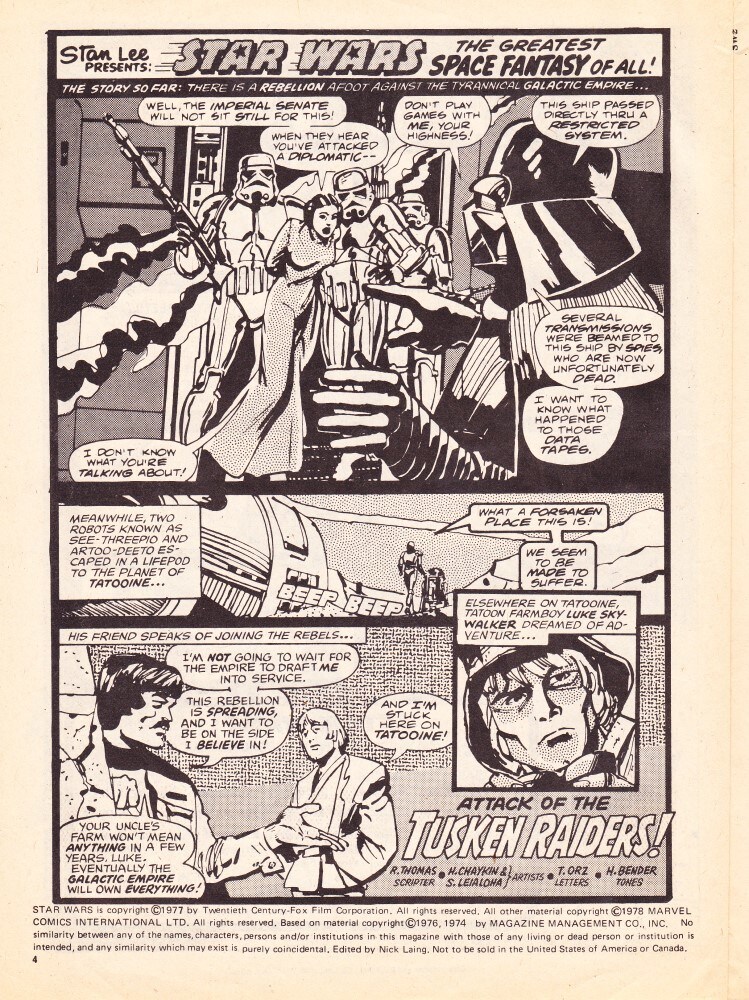 We next get a one-page summary of the previous issue's events and rejoin the story with the classic briefing-room scene as Admiral Motti learns firsthand the true power of the Force. Readers of this website are well aware of the original Marvel adaptation of Star Wars so there's no need to run through the comic, but note that the inner pages of UK Star Wars Weekly were entirely in black and white. Greyscale printing tricks were utilized to give some level of depth and shade to the artwork, but ultimately the sands of Tatooine were the same color as the steel floors of the Death Star.

It can't be overstated just how much a product Star Wars was in the 1970s. Influenced by sci-fi shows and films of the 1930s, it sits in a pocket of time in a way that no other Star Wars film has. Here in the UK we were in an age of disco and punk, of the mega movie soundtracks that accompanied both Saturday Night Fever and Grease. The hugely successful children’s TV show, Grange Hill, had premiered its very first episode exactly a week before on February 8, 1978, and light entertainment was ruled by Morecambe and Wise and The Two Ronnies -- two shows which would feature prominent Star Wars-related guests and perform occasional Star Wars skits. In the weekly magazine, to denote just how futuristic things were getting, a very familiar font would be used in the late '70s and early '80s on Palitoy's Space Ranger toys (which included future back-up strip star, ROM Space Knight) as well as a plethora of other products. Issue No. 1 of the weekly magazine gave away a free X-wing fighter and issue No. 2 followed suit by giving readers the chance to build their very own TIE fighter. Just fold as instructed, slot in your 1p coin at the front and you have a cardboard vehicle that looked nothing like a TIE fighter (it looked more like Darth Maul's Sith Infiltrator) which could "battle the X-fighter" you'd built the previous week. Seems crazy now, but in the product-starved February of 1978 this was as close as you could get to the real thing. Marvel had already released the Star Wars Official Collector’s Edition, which provided a detailed look behind the scenes and gave readers some idea of the many influences that went into the making of the film. From the depths of that 95-page magazine came this double-page article exploring the character of Luke Skywalker and the man who inhabited him, Mark Hamill. In a fascinating reveal, Hamill remembers Lucas' direction on how to play the young farm boy: "When the scenes were shot next to the Sandcrawler, I played Luke as I thought he should be played. But George said 'cut' and came up to me to tell me how he should be played. Almost subconsciously I copied George's mannerisms, and he said 'great, that's how it should be played.' There's a lot of George Lucas in Luke Skywalker."

So much for Lucas ignoring his actors! 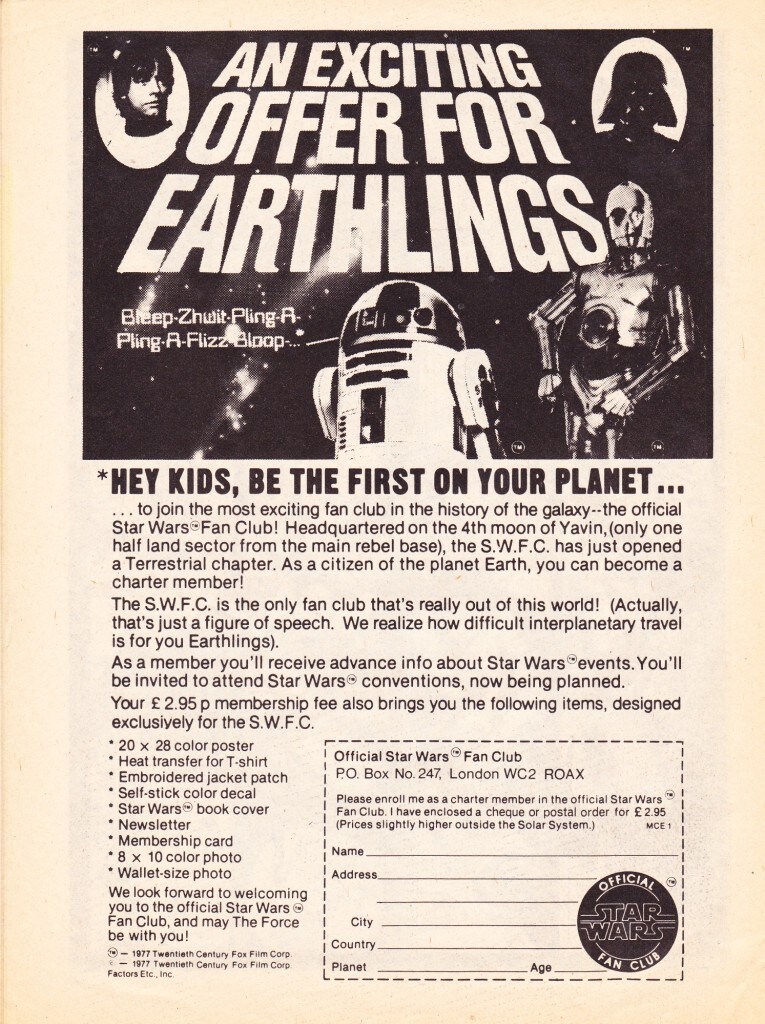 A fascinating page is this ad for the newly-started UK Star Wars Fan Club. Bringing British kids the same benefits as their American counterparts, this promised many things that wouldn't come to pass for a number of years. Using THAT font again, it hyped "advanced info about Star Wars events. You'll be invited to Star Wars conventions, now being planned." As Richard Woloski wrote in his excellent piece about the 1987 10th Anniversary convention, it would be nine years until the next convention and another 21 years before Celebration got underway. Nevertheless, kids swarmed to the fan club and it grew to become one of the most vital and inclusive elements of Star Wars fandom in the late '70s through to its end in 1986. All that for £2.95 (Back when a week’s pocket money was 50p, the weekly comic cost 10p and Star Wars figures were 50p!) One of the trickiest elements of a weekly magazine is the constant requirement to make sure the reader comes back the following week. With UK magazines publishing 52 issues per year, plus annuals and occasional summer and winter specials, the need to entice their audience for more was paramount. Back in 1978, the lure and chance of winning exclusive prizes was one such draw and here we see why: the opportunity to win the double vinyl soundtrack album, the newly-released Star Wars calendar, and a Darth Vader helmet (worth £20.00!)

There was also a pull-out spread of the Death Star so your TIE fighter and X-fighter could battle over it. Sound crazy? Perhaps, but it worked. It's worth noting that Star Wars wasn't the only content included in this weekly feast. Micronauts, released in the UK by Airfix (not to be confused with Marvel titles of the same name), filled the back cover. Marvel backup strips were also present. The second part of "Forest For The Trees" by Bruce Jones and Vincente Alcazar took us back to the world of Betelgeuse, while Stan Lee Presented 'Tales of the Galaxy" and the first part of a story written and drawn by Mike Kaluta back in 1970 called "Hey Buddy Can You Lend Me A..." Set on a future Earth after most of humanity has left, it was the perfect foil for the fresh energy of Star Wars.

Stay tuned as soon we’ll leap forward another week (or should that be leap back?) for issue No. 3 of UK Star Wars Weekly.

Mark has contributed to Star Wars Insider for almost a decade, is the owner of Jedi News, writes for DeAgostini's Build The Millennium Falcon partwork magazine, and co-hosts RADIO 1138. He's an honorary member of the UK Garrison, a friend of the Rebel Legion, and when he’s not talking, tweeting or writing about Star Wars he can usually be found sleeping where he’ll most likely be dreaming about Star Wars.