Look back at the UK version of Marvel's original Star Wars comic -- including its paper X-wing giveaway!

With the arrival of Star Wars into UK cinemas on December 27, 1977, the Star Wars galaxy expanded beyond the borders of the United States and the other countries fortunate enough to have received it and across the pond to the country it was largely shot, the UK. And with a voracious public keen for any snippets of information on the film, a comic seemed an I inevitability. Luckily for us kids of the day, Marvel UK and Stan Lee were about to provide it. 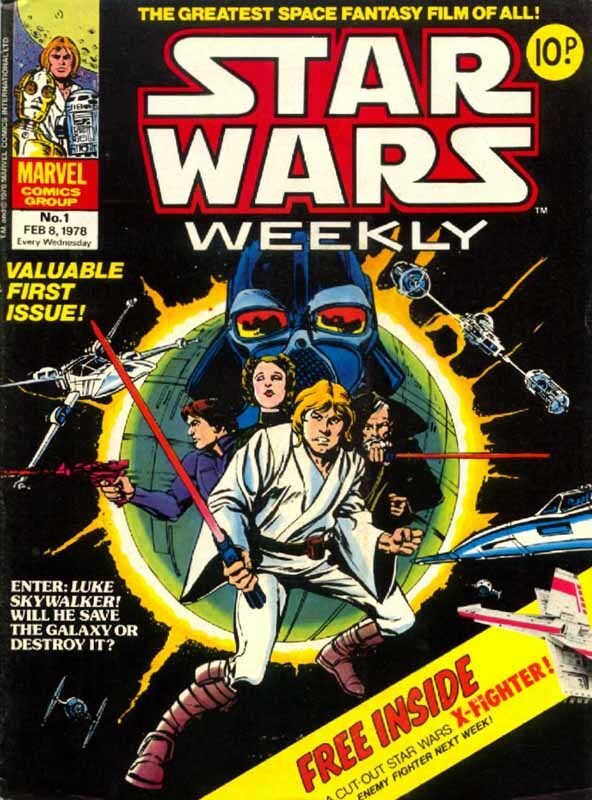 Cover dated February 8, 1977, and costing 10 pence (back in the days when a ten penny mix could buy you 20 sweets) Star Wars Weekly hit newsagents shelves with a bang, wrapped in the same cover art as the US Marvel issue 1 (and leaving Luke with a red blade, Han in a blue blazer, and Leia in green) but emblazoned with very different words. "Enter: Luke Skywalker! Will he save the galaxy or destroy it?" Typical Marvel bombast in the age of the Merry Marvel Marching Society, Make Mine Marvel, and Excelsior! It promised us "A Valuable First Issue," but perhaps even Marvel didn't realize quite how valuable it would prove to be.

Speaking with Marvel UK editor and British comics legend Dez Skinn last year, I broached the subject of just how perilous the situation was for Marvel back in the late '70s, with a shrinking comics market, outlets closing, and the landscape changing on both sides of the Atlantic.

"Marvel UK was hemorrhaging money. The only thing that was making any money was Star Wars Weekly. It was doing so badly they tried to sell the company off. Nobody wanted it, nobody found it viable. The only interest they got was from IPC because Star Wars Weekly was outselling 2000AD and they only wanted Star Wars Weekly. They didn't want Spider-Man and the Hulk and The Avengers, they didn't want any of that. So that didn't work for Marvel because they were already licensing Star Wars from Lucasfilm, so they wouldn't get much out of a shared sub-license." 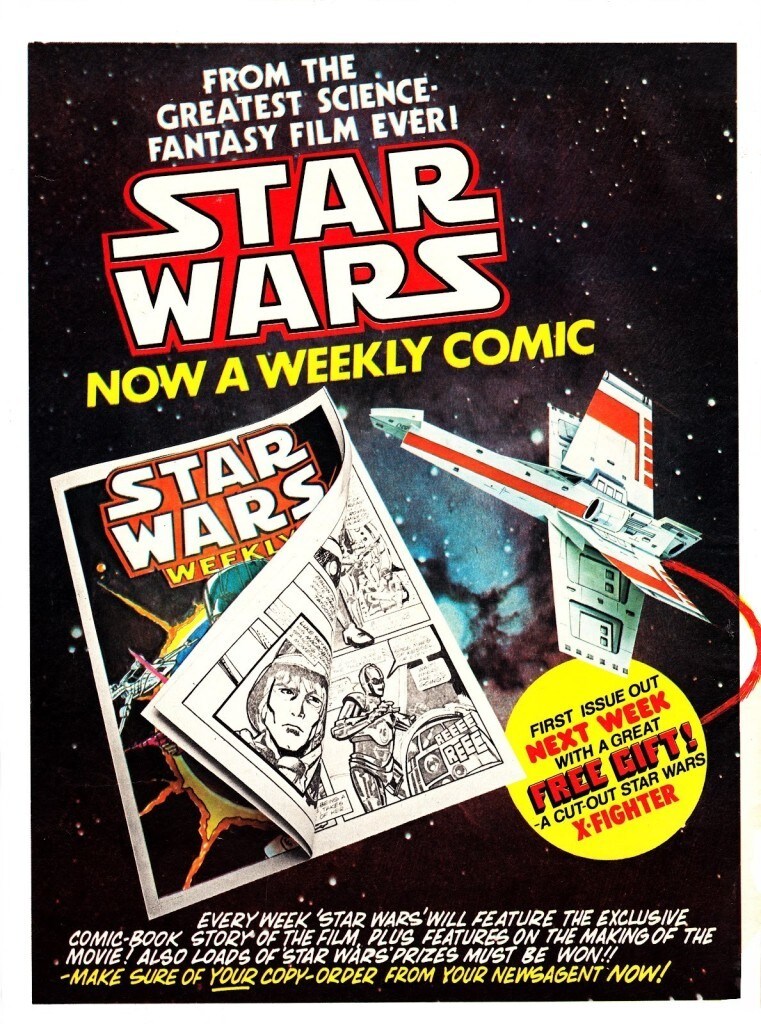 Unbelievable to think that the mega franchises that Marvel now encompass could have become the property of IPC and not Disney (which was itself in a slump during the '70s). But back to that first issue.

Famously, artist Howard Chaykin and writer Roy Thomas hadn't seen the film when they made the comic, working only from the few meager transparencies that 20th Century Fox released for the film, and so what us UK kids saw in the comic was far removed from what was in the movie. And it's worth mentioning that by early '78 there were still parts of the UK that hadn't yet got the film, so they knew no better. In 2015 there is a level of expectation alien to the creators and audiences of '77, '78. But back in the days of disco, flares, Choppers, ABBA, Spangles, and ELO, we were a lot more laid back. Those panels fairly exploded with the adventurous spirit of Star Wars and even today, after Dark Horse released an excellent Special Edition adaptation in '97, that original version is the one we go back to. 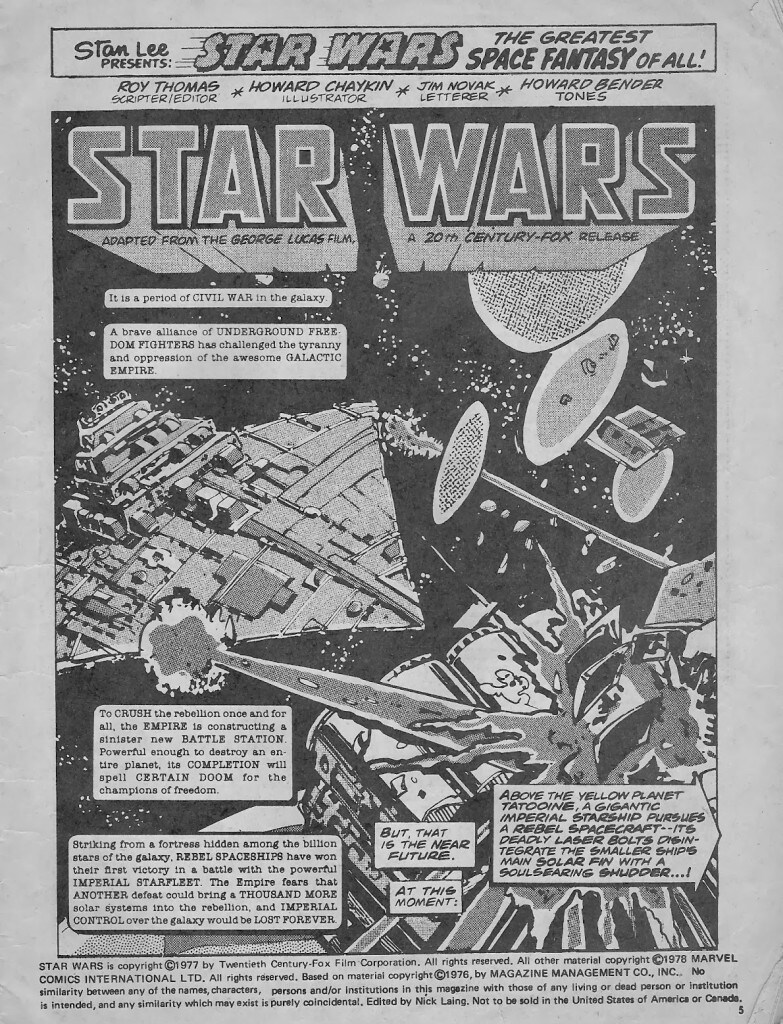 But what made the UK version any different from the US, other than the differing size, black and white pages, and fewer pages of Star Wars? Well, it introduced us to our heroes and villains via a page recounting their stories up to that point, as well as packing the issue with familiar British adverts of the day. It also -- as was the style of British weekly comics back then -- ran a back-up strip, in this first issue a "Tales of the Galaxy" story called "The Forest for the Trees." A dark and foreboding tale written by Bruce Jones with art by Vincente Alcazar, the short story told the story was originally published in Unknown Worlds of Science Fiction Giant Size Special #1 in 1976, published by Magazine Management (utilizing the logo of its distributor, Curtis Circulation), which at the time was the parent company of the struggling Marvel Comics. 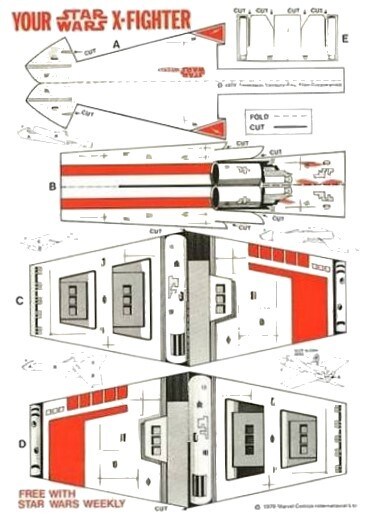 But most memorable was the free gift that first issue was giving away. These days, when nine out of 10 UK kids' magazines come bagged with plastic toys, sweets, stickers, and more, back then it was far more rare, and so the chance to build your very own cut-out  Star Wars X-wing fighter was priceless. Not many survive now (not many made it out of the '70s in one piece), but back then it was fried gold, a piece of the saga before it really became one, and another brick in the wall of memories that make Star Wars and these weekly titles in particular so important and beloved. 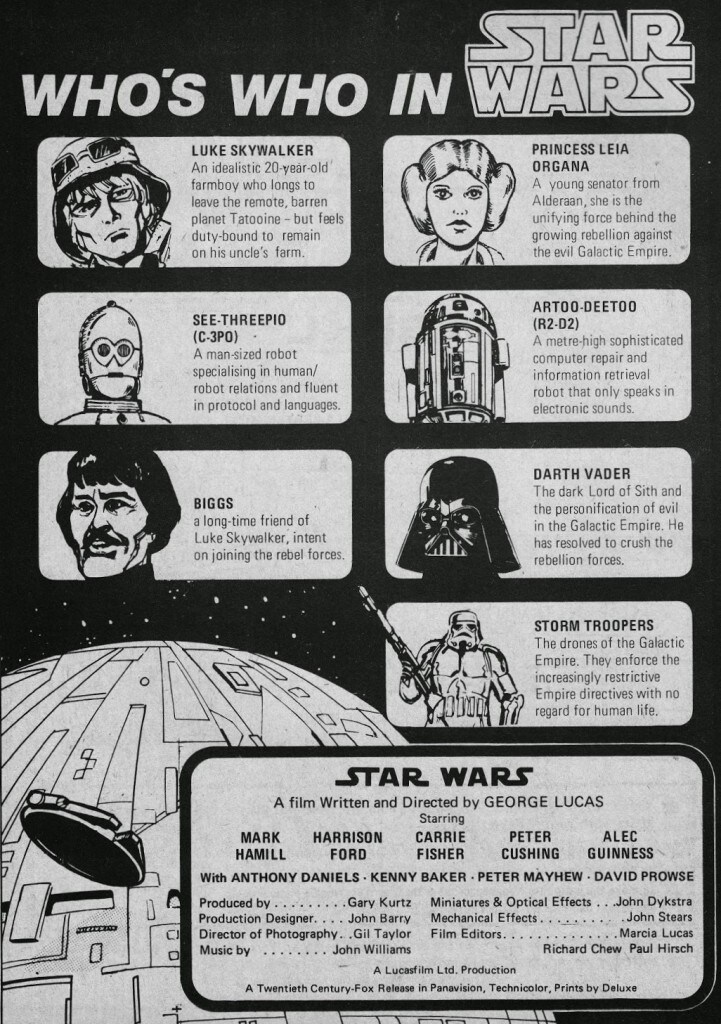 The title -- of course -- was a smash, turning around the fortunes of Marvel in the US and its UK arm at the same time and launching a run of 171 issues (encompassing name changes to Empire Strikes Back Weekly, Empire Strikes Back Monthly, and Star Wars Monthly), as well as 155 issues of Return of the Jedi Weekly. And with the return of Star Wars to Marvel with another million-selling debut issue, it's an appropriate time to look back and remember that while Star Wars may be the most cyclical saga in cinema history, it couldn't do any of it without the skills of the artists, the support of the publishers, or the continuing love of the fans.

Mark Newbold has contributed to Star Wars Insider magazine since 2006 and been involved in websites since 1995. He is the co-owner and daily content manager of www.jedinews.co.uk.