Star Wars in the UK is a feature in which StarWars.com looks at how our friends across the galactic pond experienced the saga through the years.

Two years of stepping back to 1978, our tour of the first dozen issues of Star Wars Weekly comes to an end as we take a look at issue 12. Hitting UK newsagents on Wednesday April 26th 1978, the cover screamed that we were about to experience the "SOUL-SHATTERING CLIMAX OF THE YEAR’S MOST SENSATIONAL MOVIE." Behind a Howard Bender cover showing Luke and Vader clashing, both brandishing red lightsabres (and I spell it that way intentionally, as that’s how it was presented in the magazine back in ’78), we see a red X-wing hunt down Vader’s yellow TIE fighter over a blue Death Star. It was still 10p to buy, still packed full of great back-up strips and increasingly essential for kids of the day to own. 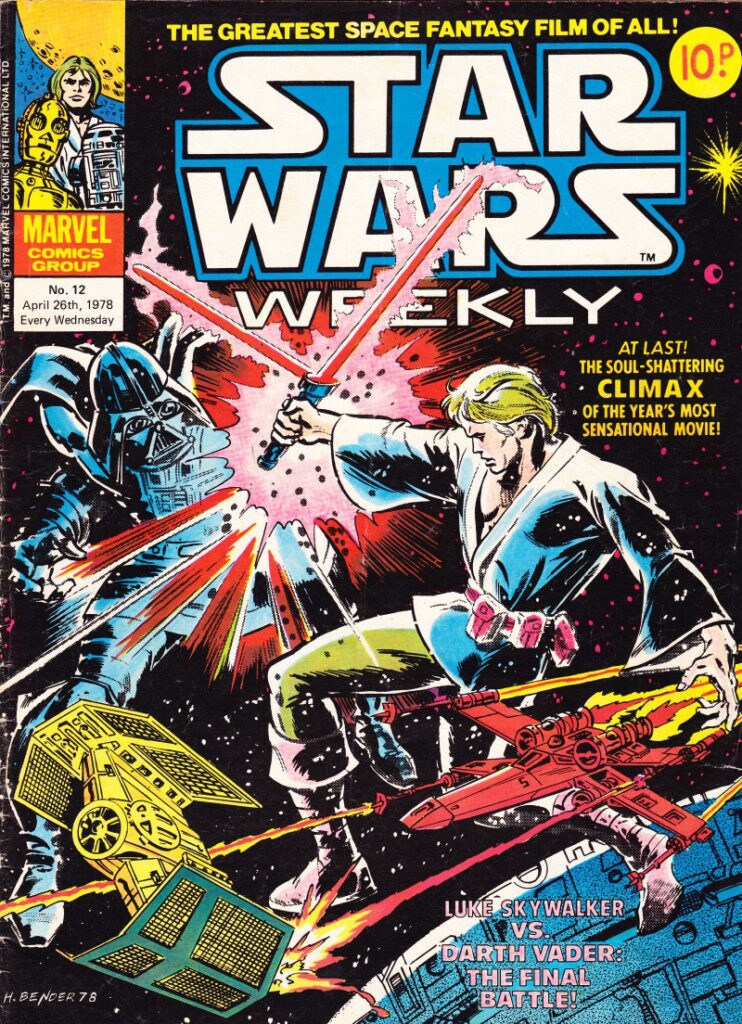 Topping the charts, in the days when records simply didn’t enter the hit parade at number one but had to crawl and fight their way up the list, was a trio of classics. At number one was "Night Fever" by The Bee Gees, followed by "Matchstalk Men and Matchstalk Cats and Dogs" by Brian and Michael, and "I Wonder Why by Showaddywaddy. The top three albums were unchanged from last week with Nat King Cole, the Saturday Night Fever soundtrack, and Genesis in the lead slots and a new entry landed at number 40. John Williams’ soundtrack to Close Encounters of the Third Kind arrived on the UK charts, beginning a six-week stay.

Nottingham Forest FC won the First Division with Brian Clough at the helm, TV presenter Lauren Laverne was born two days later, and your radio listening on Radio One would likely start with Noel Edmonds, followed by Simon Bates, Paul Burnett, Tony Blackburn, Kid Jensen, and wrap up with the legendary Jon Peel at 10 p.m.

Now, let’s step away from the real world of 1978 for the final time and open the cover to issue 12 of Star Wars Weekly and dive inside. 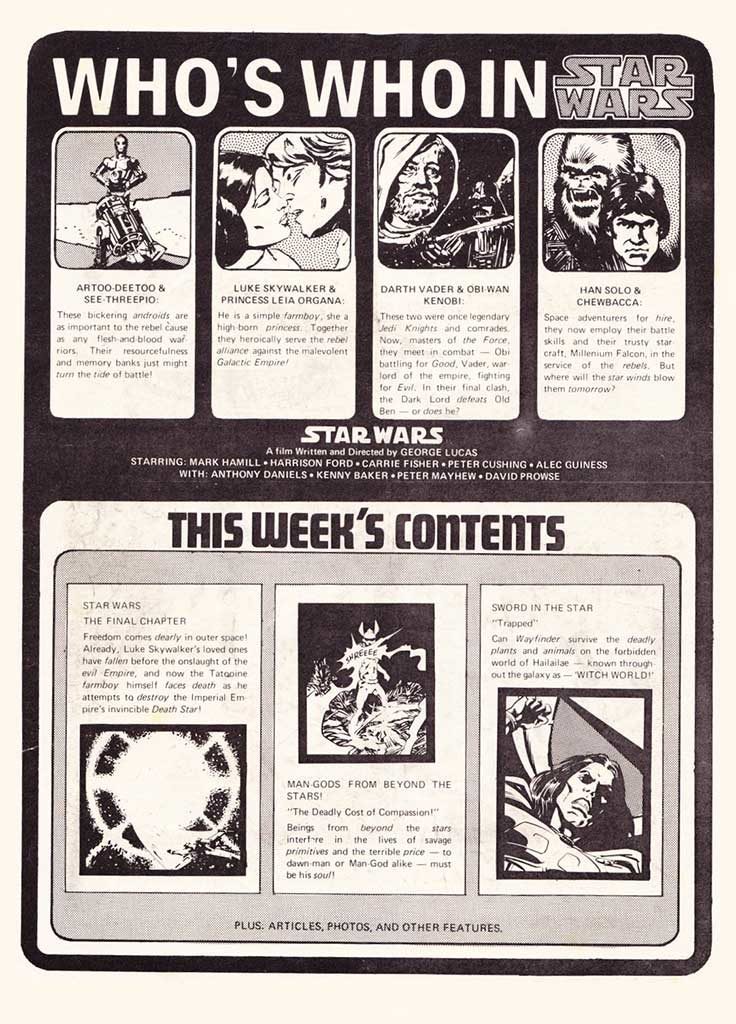 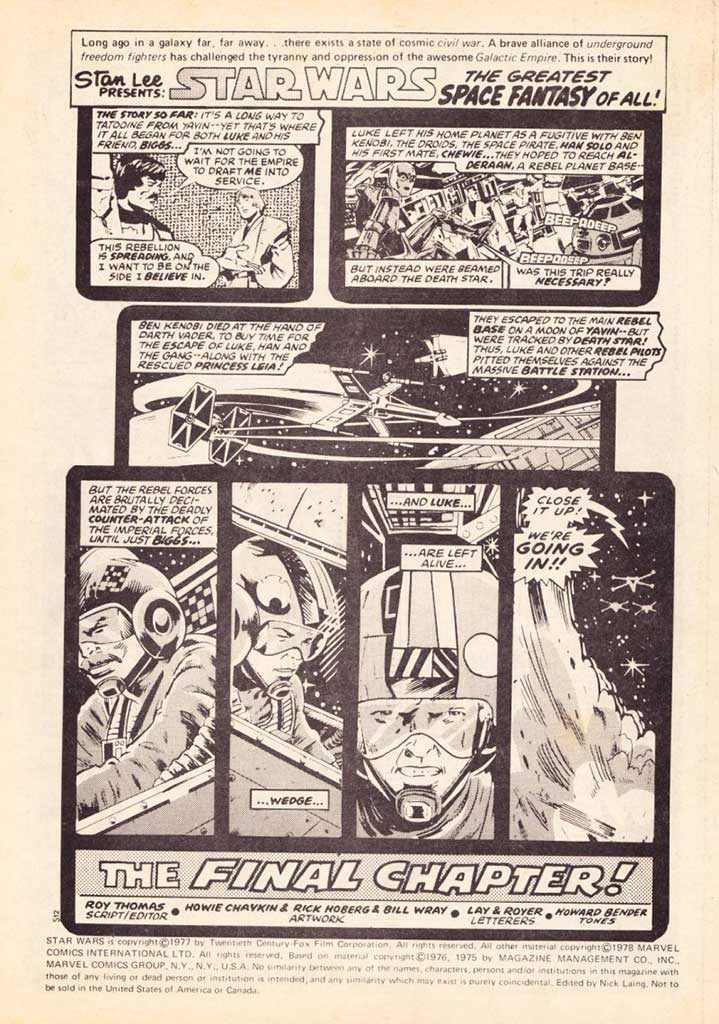 As always, we begin with a truncated Who’s Who In Star Wars looking at Artoo and Threepio, an inches-from-kissing Luke and Leia, Ben and Vader, and Han and Chewie.  All good stuff, but let’s tuck into the main event -- the Rebellion's iconic attack on the Death Star. We zip through the story so far to see Biggs explain how he is unwilling to wait to be drafted and would be jumping ship and joining "the side I believe in," then blast off from Mos Eisley, and go right to the beginning of the attack on the battle station. Biggs, Wedge, and Luke are our final three combatants who close it up and dive in.

Spoiler alert: the good guys get a positive result. Page 12 ends the adaptation with our six heroes standing with their medals (well, some of them have their medals. Chewbacca doesn’t get his Medal of Bravery until 1980’s Star Wars Weekly #97 in the story "The Day After The Death Star" by legends Archie Goodwin and Carmine Infantino. See December 2015's issue #5 of Marvels' Chewbacca series for the end of Chewie's medal saga.)

What that final panel does perfectly is hype what’s to come the following week in what is, for all intents and purposes, the beginning of the EU/Legends era. "NEXT ISSUE: A NEW ADVENTURE OF THE STAR WARRIORS." 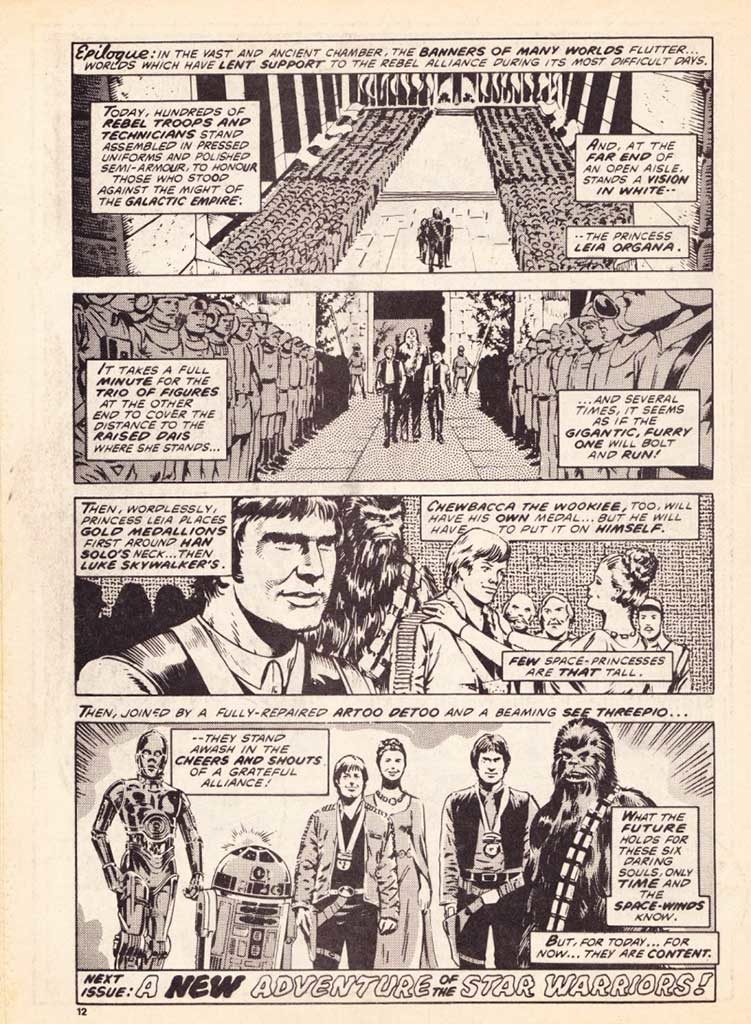 It may seem crazy now, but back in 1978, when all the Star Wars we had was the movie itself, there was no rock-solid guarantee that readers would want more. They did, we know they did, but to the publishers and backers of Marvel -- who was navigating tricky financial waters at the time -- it wasn't a sure thing. The full-page ad on page 13 shows just how keen Marvel UK were to retain the readership and prep us for adventures that would leap beyond the story of the film and span the gap to the sequel. "IT’S ALL OVER…FOR NOW!" Splinter of the Mind’s Eye and the Han Solo trilogy of novels would follow soon after, and an entire galaxy would develop and keep developing for four decades.

Of course, the Marvel US issues were far ahead of the UK in terms of story. At the time, US comics weren’t readily available in UK stores, as Marvel UK wanted to focus on their weekly releases, so only the most hardcore collectors would have issues sent from the US. For a generation of UK Star Wars fans, Star Wars Weekly was where it was at. Page 20 indicated the direction that the title was set to steer in subsequent issues. By giving the comic a more magazine-style, and bearing in mind that the UK weekly title was the only official weekly release (the poster magazines of the time were monthly), Star Wars Weekly had the opportunity to get info about the film out to a wide audience. Here we meet the model makers of the film, the real stars of Star Wars, as the headline says, and go in-depth with John Dykstra, where he discusses the technical magic of the film and his revolutionary Dykstraflex camera.


The issue was jammed with the usual back-up strips, a staple of the title. Doug Moench, Alex Nino, and Roy Thomas brought us "Tales of the Galaxy: The Deadly Cost of Compassion" while "The Sword in the Star Stave II: Witch World!" by Bill Mantlo and Keith Giffen completed the issue. The back cover of the magazine once again featured the infamous Force Beam ad, which hyped an unlicensed Star Wars product in an official magazine, but I’d prefer to end this retrospective with the inside back cover. A classic Marvel pinup of Luke and Leia swinging across the Death Star shaft -- it’s kinetic and action-packed, totally capturing the tone of Star Wars -- and a fitting end. Thanks for following along in my look back at a magazine that meant a lot to so many.

Mark is the owner of Jedi News, has written for Star Wars Insider and Build The Millennium Falcon partwork, and co-hosts RADIO 1138 and Take Cover on the Jedi News Network. He’s an honorary member of both the 501st and the Rebel Legion and when he’s not talking, tweeting, or writing about Star Wars, he can usually be found sleeping, where he’ll most likely be dreaming about Star Wars.