The Star Wars adventure -- remastered with a glossary, collector's pin, and a Death Star schematic.

Grab your Spangles and Monster Munch and let’s dive into issue No. 3 of Star Wars Weekly, cover dated February 2, 1978.  With Star Wars fever rising by the day and the anticipation for Star Wars-related content as hot as ever, Wednesdays meant kids across the country were zooming down to the newsagents on their Choppers (yes, the most famous kids bike in '70s Britain was called the Chopper), Grifters, Budgies and Tomahawks and grabbing the latest issue (along with the obligatory 10-penny mix if they’d earned their pocket money that week).

Issue No. 3 arrived behind an action-packed cover (which I will say with confidence was inked by Tom Palmer) showing a very mature and confident Luke ordering Ben Kenobi to “swing that lightsabre Ben or we’re finished!” (note the British spelling of "lightsabre" which was prevalent both sides of the pond in those days). And by looking at this scene -- which quite clearly wasn’t in the film itself -- young Skywalker would be correct. A HUGE green Gotal looms large as Ben swings his red blade and Luke blasts a beaked alien into oblivion. No half measures here -- Marvel UK wanted to grab a young fan base by the scruff of the neck and let them know that Star Wars Weekly was THE comic to buy (all that for just 10 pennies!). Kellee Patterson might have been singing “If It Don’t Fit Don’t Force It,” but in an age when so little product was available, anything goes.

Enough reminiscing, let’s open the page and see what’s waiting for us inside. 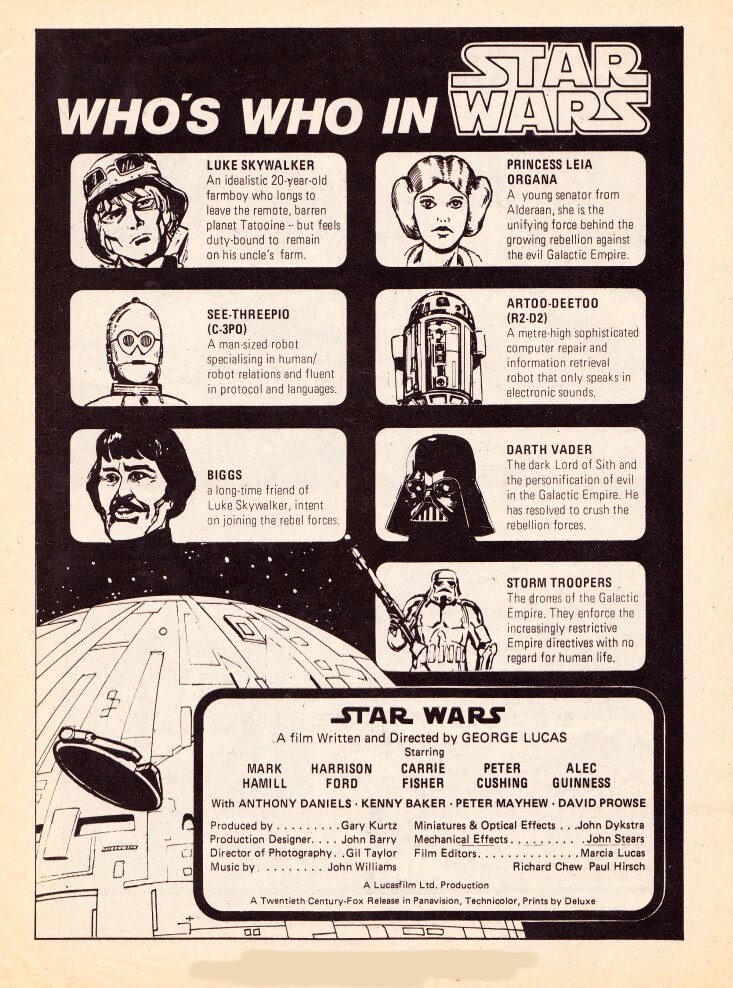 As was the custom with the UK weekly magazine, the issue started with Who’s Who on the inside cover and recapped the events of the previous issue. We see a stunned Leia (clearly flaunting the George Lucas rule that “there’s no underwear in space”) and the infamous briefing room scene where Vader teaches Admiral Motti just how powerful the Force can be. Luke finds Leia’s message, heads off into the Jundland Wastes and encounters “TUSKEN RAIDERS!”

We know the story of Star Wars well enough to sidestep a retelling of the plot. Issue No. 3 takes us up to the moment Luke is introduced to Chewbacca and promise us "Six Against The Galaxy" in the next issue. If that didn’t get your pulse racing for Wednesday, February 29 (yes, 1978 was a leap year) then nothing would. 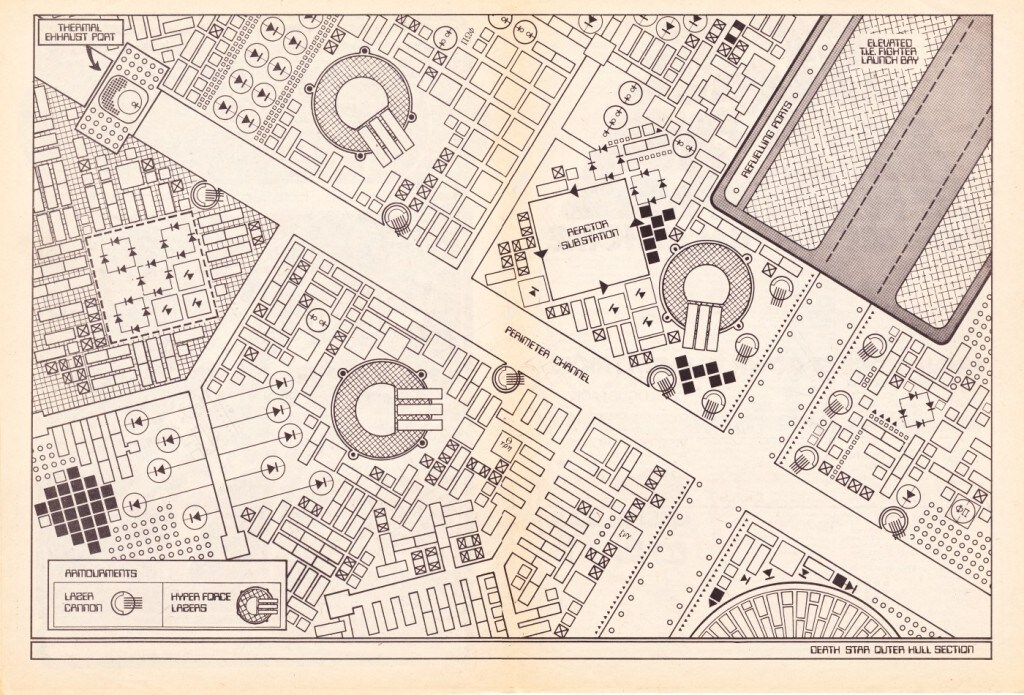 Issue No. 1 had given us the X-fighter (a.k.a. the X-wing) and No. 2 the TIE fighter, so to complete the set issue No. 3 featured a pullout Death Star Battleground. And just in case you weren’t sure quite what to do with it, the magazine told you: In 1978, the home video market was vastly different to the beast it would become in the '80s. Bing Crosby Enterprises (yes, THAT Bing Crosby), had given the world's first demonstration of a videotape recording in 1951, but it wasn’t until BetaMax (which launched in ’75) and VHS (arriving in ’76) that home video would really take off. Not many people had the facility to record at home (hence the scarcity -- until the rise of YouTube and online downloads -- of The Star Wars Holiday Special) and movies were ridiculously expensive to buy. The thought of owning a full copy of Star Wars seemed like science fiction to the majority of kids, and so the chance to own even a small portion of the movie was hugely attractive.

Leisure Mail gave UK fans that very opportunity. You could own eight minutes in silent black and white for £6.25, color for £12.15, eight minutes of color with sound for £16.15, or 20 minutes in color with sound for £32.95. That might seem cheap these days, but with inflation that would equate to £183.22 ($285.29) in today’s market. And that's just for 20 minutes of selected highlights from the film. Believe me when I say that kids back in ’78 really did earn their stripes when it came to going the extra mile for Star Wars. 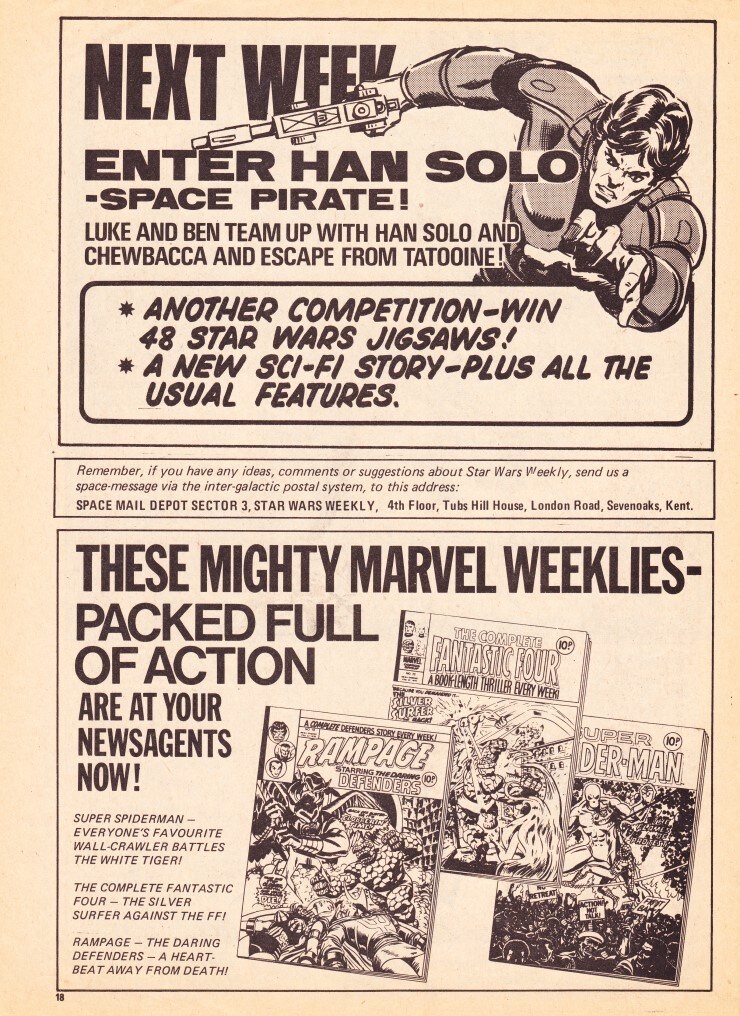 A common sight in the pages of a weekly UK comic was hype for the following issue. In a cutthroat industry where shelf space was at a premium and titles came and went with alarming regularity, the practice of pre-selling the next issue was paramount. Even for a hot property like Star Wars, this was no different. It was still early doors and the survival of the title wasn’t guaranteed. Despite the US Star Wars title selling over a million copies of its first issue and all but saving Marvel from the dumpster of history, the comics trade in the UK was decidedly unromantic. Targets needed to be met, and if they weren’t then the title would go the way of Marvel UK’s Rampage and Complete Fantastic Four and many DC titles later in ‘78 during the infamous DC Implosion.

Cue this ad featuring a very un-Han Solo Han Solo: "Enter Han Solo -- Space Pirate! Luke and Ben team up with Han Solo and Chewbacca and escape from Tatooine!’ Classic Marvel hyperbole in an age when somewhere in a quiet corner of the Marvel bullpen, there was a bucket brimming with exclamation marks that just had to be used up each issue. And don’t forget the wider family of Marvel titles: the aforementioned (and ultimately doomed) Rampage and Complete Fantastic Four along with Super Spider-Man.

As always, the issue wasn’t just Star Wars from cover to cover. Stan Lee presented Tales of the Galaxy and Hey Buddy Can You Lend Me A…Part II (more classic Mike Kaluta story and art as our heroes battle giant ants on a strange alien world). There’s also a second Tales of the Galaxy with a script by Mat Warrick and classic European style art by Gonzales, telling a tale of a doomed planet Earth falling victim to alien threads which accumulate to block out all sunlight. A very weighty tale for the kids of ’78. 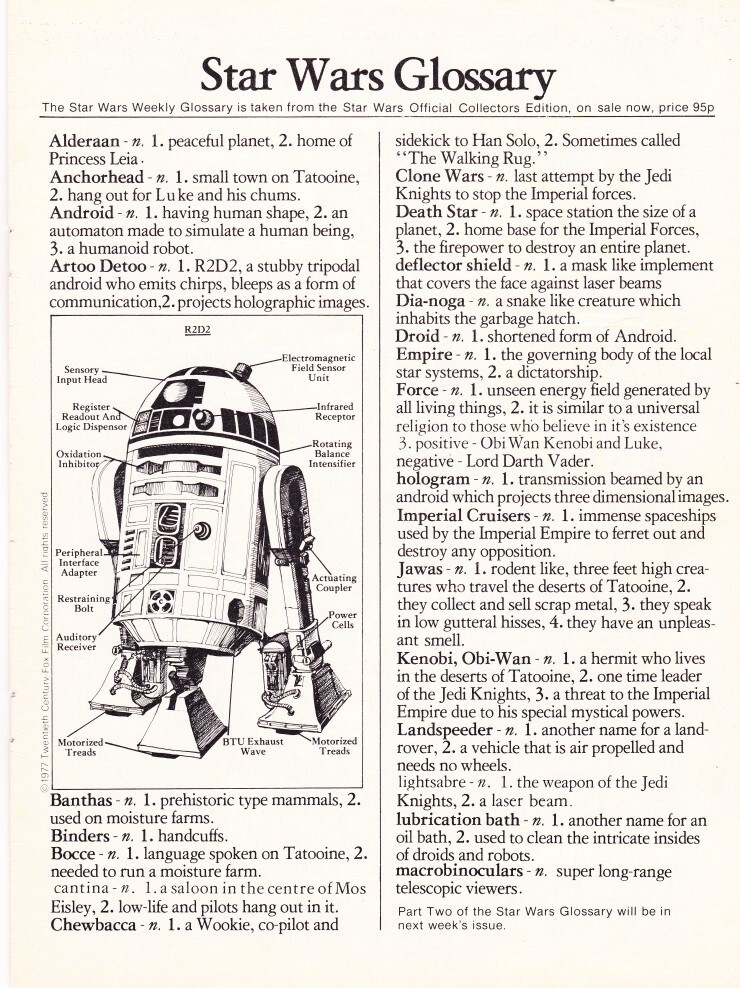 In these days of Essential Guides, Complete Cross-sections, Character Encyclopedias and Databanks, it may seem rather redundant to have a one-page Star Wars Glossary. But step back to the knowledge-starved days of 1978 and that glossary was gold dust, telling you all you needed to know about the galaxy far, far away.

Taken from Marvel’s own Star Wars Official Collector’s Edition, we learned a number of fascinating facts, some which still hold and some which have been altered. For example, did you know that the Clone Wars was the last attempt by the Jedi knights to stop the Imperial forces? Or that Chewbacca was sometimes called “the walking rug?”

Back then we wrote "Artoo Detoo" and "See Threepio" instead of R2-D2 and C-3PO, Ben Kenobi used a "lightsabre," not a lightsaber, and Kenobi, Obi-Wan was the one-time leader of the Jedi Knights. Certainly a lot has changed, but there was a special kind of magic to the galaxy when the only story we had was the original Star Wars. Rounding out the issue was a striking piece by the late Filipino artist, Tony DeZuniga, most famous for co-creating DC’s Jonah Hex. This Star Wars Collector’s Pin Up on the back page featured all of our heroes and villains and encouraged kids to cut it out and pin it up on their wall. Some did, some didn’t, but at least part of Marvel’s ploy was for kids to buy two copies of the magazine -- one to cut up and display posters such as this and another to keep pristine.

So there you have issue No. 3. Don’t change that channel, as next time we leap the lanes for issue No. 4 of UK Star Wars Weekly.

Mark has contributed to Star Wars Insider for almost a decade, is the owner of Jedi News, writes for DeAgostini's Build The Millennium Falcon partwork magazine, the UK’s largest free newspaper The Metro and co-hosts RADIO 1138. He's an honorary member of the UK Garrison, a friend of the Rebel Legion and when he’s not talking, tweeting or writing about Star Wars he can usually be found sleeping where he’ll most likely be dreaming about Star Wars.