Star Wars in the UK: Star Wars Night with the CBSO

The power of John Williams' music reverberates at the Symphony Hall.

With a few months until the worldwide release of Star Wars: The Force Awakens, it’s hardly surprising that there are any number of Star Wars-related events happening across the globe. From theme nights at baseball games to guest appearances on chat shows, Star Wars is ever-present and it’s no different here in the UK. On Friday, October 16th, I had the good fortune to attend a very special concert performed by one of Britain’s foremost orchestras, the City of Birmingham Symphony Orchestra at the Symphony Hall. As part of their Friday Night Classics series, the CBSO was holding a Star Wars night, and what a night it turned out to be. 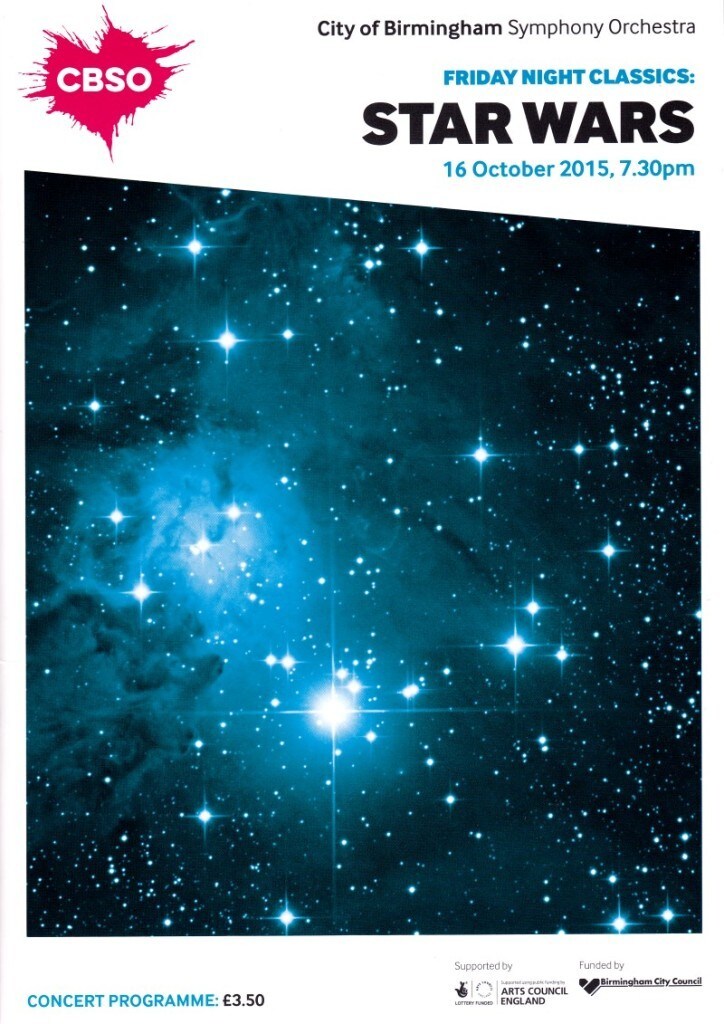 Pre-show festivities featured a chat between our evening’s presenter, The Phantom Menace voice actor Marc Silk, concert producer and announcer Tim Burden, and movie make-up artist Shaune Harrison. The three talked about the music of John Williams and their own special involvement with the saga. Harrison worked on a number of creatures for The Phantom Menace including Bib Fortuna (interestingly the original Bib Fortuna, Michael Carter, was offered the role but declined due to the rigors of the make-up) and Jar Jar Binks. Silk talked about his time recording the lines for Grand Senator Aks Moe and being asked to recite it in higher and higher pitches for the maker himself, George Lucas. With Burden leading the conversation, it was a great way to start the evening. 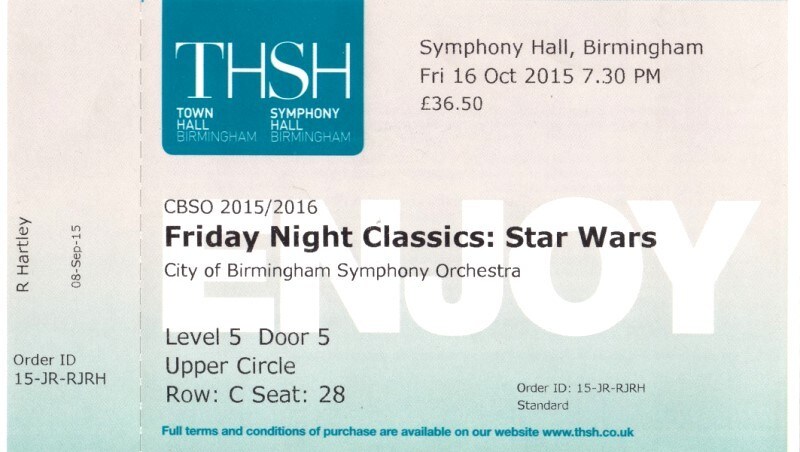 We (me and my father-in-law who bought the tickets and came with me to the concert despite knowing zero about Star Wars) moved into the Upper Circle and were treated to a sweeping view of the magnificent Symphony Hall. Opened by Queen Elizabeth II in 1991, the stunning acoustics of the room make it one of the premiere concert venues in the world and brings 370,000 people into the 2,262-seat auditorium every year. These days, the CBSO calls the Symphony Hall home. Since a premiere performance conducted by Sir Edward Elgar in 1920, the CBSO has been Birmingham’s first orchestra and has spent the better part of a century traveling and performing across the country and the world. However, tonight was Star Wars night and a galaxy far, far away was where we were headed. 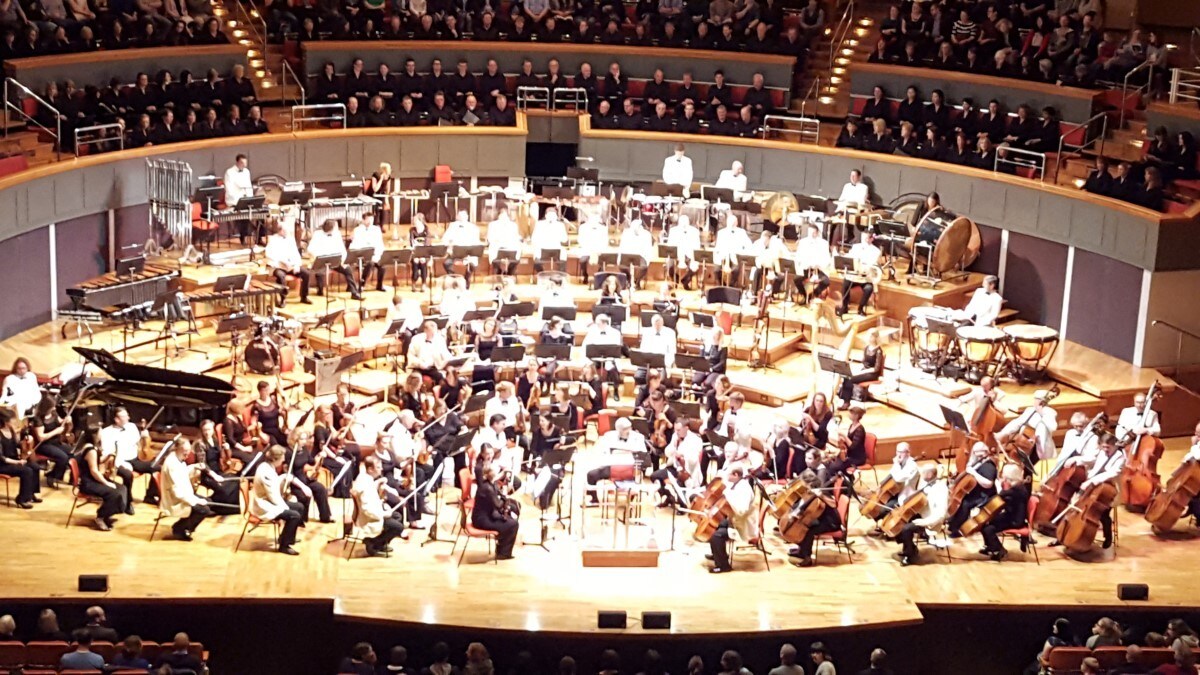 Led by conductor Michael Seal, the CBSO started with Alfred Newman’s 20th Century Fox fanfare before launching into the familiar Star Wars theme from A New Hope. Then came one of the many musical surprises of the night as the piece ended not with the A New Hope credits, but with the triumphant end moments of Return of the Jedi. Seal was clearly loving it, encouraging his musicians to take a bow to rapturous applause at every opportunity. His enthusiasm was infectious, feeding the music-hungry crowd and leading them into a selection of themes from The Phantom Menace. "The Flag Parade" was presented in a very unfamiliar arrangement before leading into "Anakin’s Theme" and the "Adventures of Jar Jar Binks." The City of Birmingham Chorus made themselves known, standing to perform the dramatic vocals from "Duel of the Fates." In a room like this, with a knowledgeable crowd and an orchestra at the top of their game, it was an exhilarating moment. 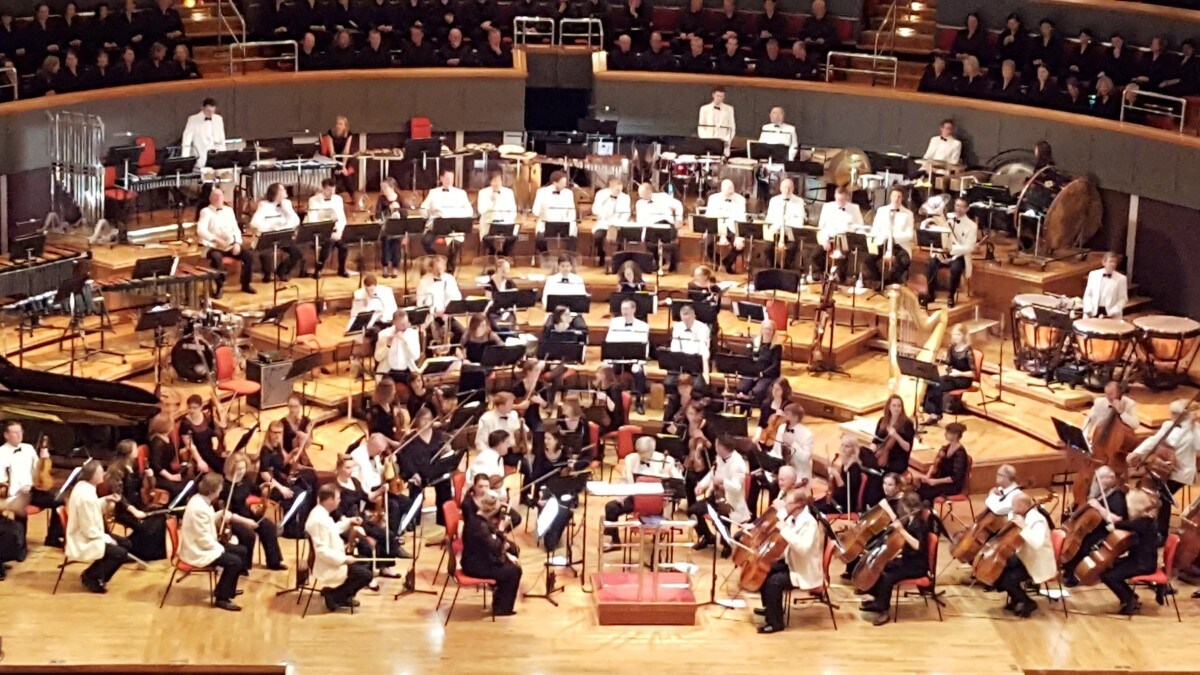 Attack of the Clones -- surely the most underrated of all the Star Wars scores -- was next with Across the Stars, and from there we were treated to "Yoda’s Theme" and the "Imperial March" from The Empire Strikes Back. A perennial crowd-pleaser, "The Imperial March" is certainly the best known Star Wars theme after the "Main Title" itself. Revenge of the Sith was next and once again the CBSO Chorus were used to great effect in "Battle of the Heroes," sending the audience off to the intermission on a high. 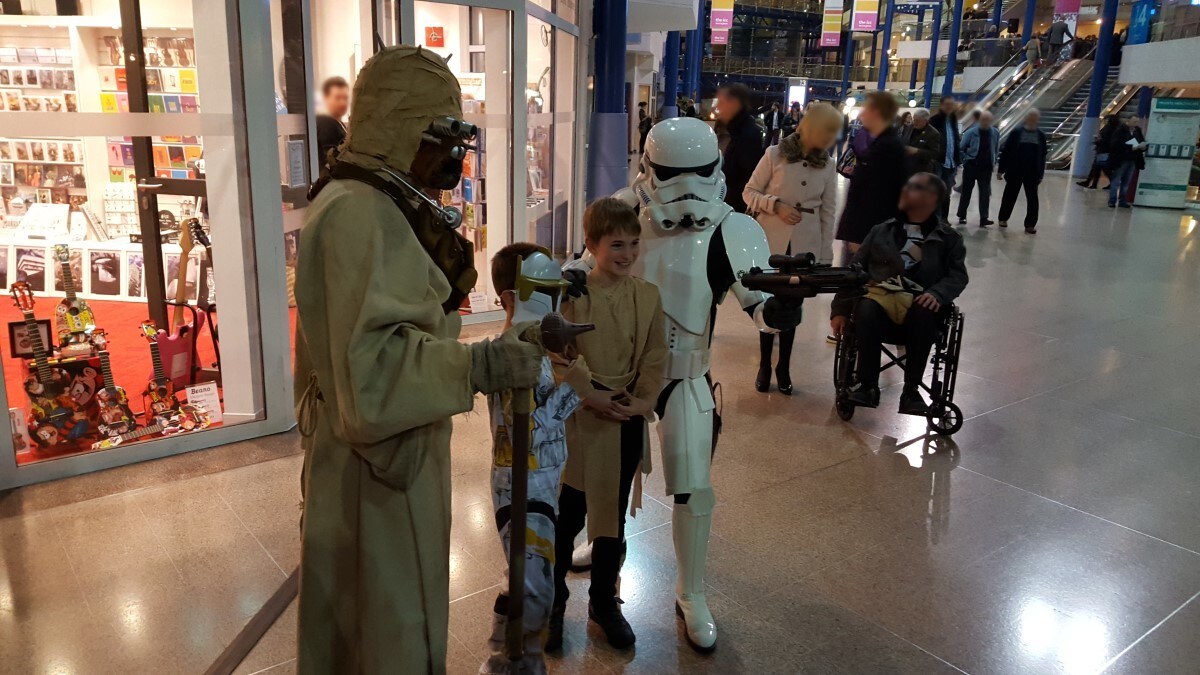 One small tub of double chocolate chip ice cream and a cappuccino later, and we were back in our seats for the second half, which opened with "Here They Come!" (Better known as the "TIE Fighter Attack "). Again presented with an unfamiliar orchestration, it was a thrilling piece, not only because I didn’t know quite what was coming next, but because the CBSO was so clearly revelling in the music. As fans, Star Wars music is so ingrained into us that we can spot a half-hearted performance from a mile away. The music is about so much more than just the notes. There’s emotion and meaning in there and the performances conveyed that beautifully.

The "Cantina Band" was next, bringing a touch of jazz wailing into the Symphony Hall and rousing the crowd into rapturous applause. The haunting flute opening in "Princess Leia’s Theme" made for a nice followup, and "The Throne Room" mixed the classic music from A New Hope with the end credits of Revenge of the Sith.  "The Asteroid Field" from The Empire Strikes Back then barrel-rolled us and kept the audience on the edge of their seats until a much softer selection from Return of the Jedi. "Luke and Leia" was hauntingly performed, a highlight of the soundtrack that perfectly essays the relationship between the Jedi twins. 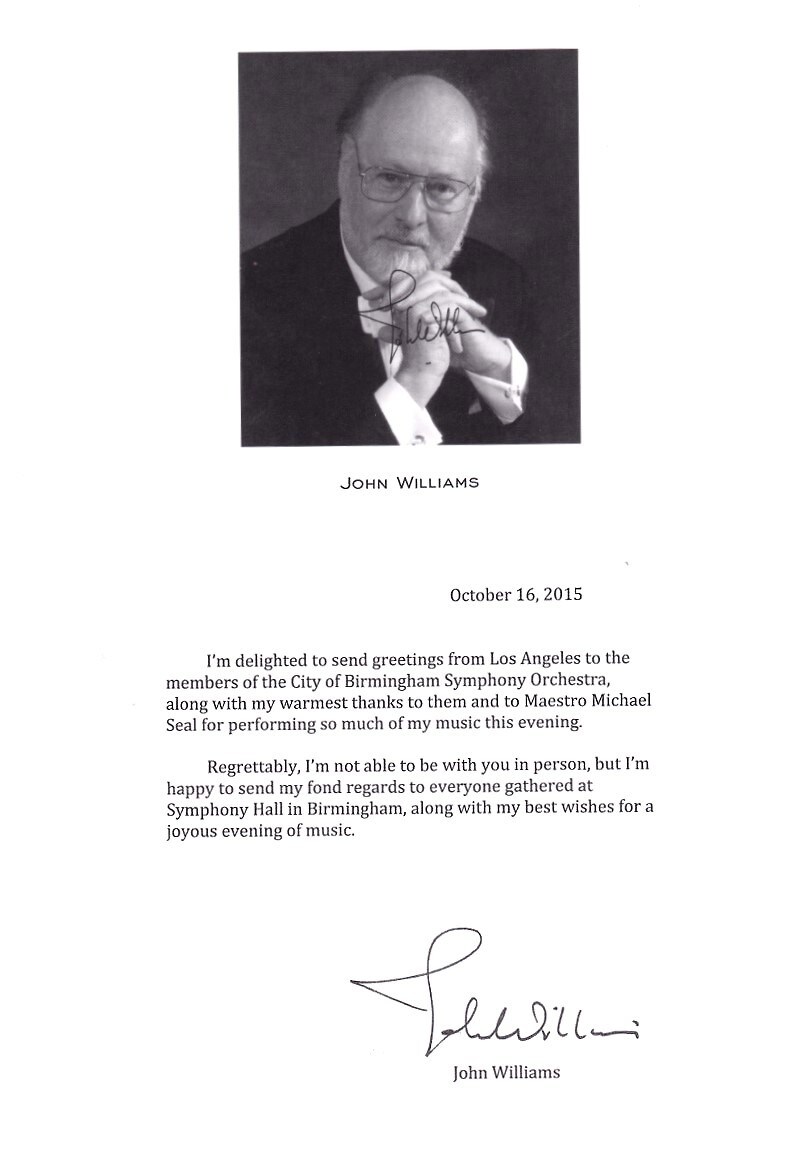 Throughout the evening, Marc Silk had come on stage to introduce various tracks, and again he appeared to give us some special news. The Maestro himself John Williams had sent a message from Los Angeles, wishing the CBSO the best of luck for the evening. With The Force Awakens so tantalizingly close (during the pre-concert chat, Tim Burden informed us that The Force Awakens soundtrack had been completed just three days earlier) and the promise of new music just weeks away, what could possibly be a better seal of approval than that? 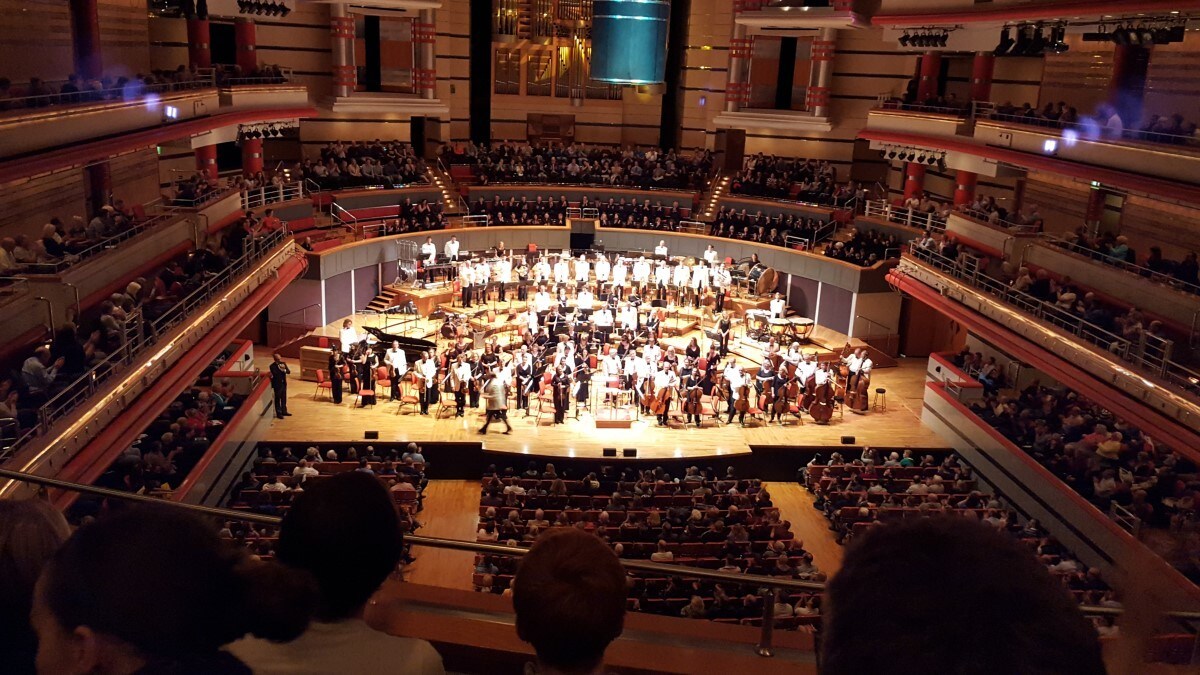 We were almost home as "Parade of the Ewoks" brought a smile to everyone’s face, and then, a surprise. Marc Silk once again appeared to introduce the concert piece "The Forest Battle," a track from the original Return of the Jedi soundtrack that is rarely performed live. Hopefully that won’t be the case going forward as it was the highlight of the night -- for me at least -- hitting every note like a young moisture farmer bullseyeing womp rats in his T-16.

The concert was over, but the crowd certainly wasn’t having any of it, and Michael Seal was coaxed (though I suspect it took very little coaxing) out of the wings to conduct the encore: a second run through "The Imperial March." Finally sated, the audience left the grand environs of the Symphony Hall and ventured out into the brisk Birmingham evening on Broad Street. The UK Garrison was there, busily posing for photographs with smiling crowds as the spirit of the Force was in full effect. Fingers crossed it won’t be too long before the Symphony Hall and the CBSO treat us to another evening of Star Wars music, one that includes tracks from The Force Awakens.

Mark has contributed to Star Wars Insider for almost a decade, is the owner of Jedi News, writes for DeAgostini's Build The Millennium Falcon partwork magazine and co-hosts RADIO 1138. He's a Rebel Legion UK supporter, an honorary member of the UK Garrison, a friend of the Rebel Legion, and when he’s not talking, tweeting or writing about Star Wars, he can usually be found sleeping where he’ll most likely be dreaming about Star Wars.