The Power of the Force and Found Family in Star Wars: Hunters: Battle for the Arena - Exclusive Reveal

Author Mark Oshiro tells StarWars.com about drawing inspiration from Lando Calrissian and Asajj Ventress for their new middle-grade novel based on the forthcoming game.

Lando Calrissian, Jango Fett, and Asajj Ventress may not seem like obvious inspirations for a new anti-hero. But in this trio of driven, often self-serving characters, author Mark Oshiro found the elements they needed to tell the story of Rieve from Star Wars: Hunters.

Today, StarWars.com is pleased to reveal the cover of Oshiro's new book, Star Wars: Hunters: Battle for the Arena, based on the forthcoming game. The story will transport us to the world of Vespaara where newcomer Rieve, a Force-sensitive orphan from Corellia, is finding her footing as a Hunter in the Arena. But it's not long before her past comes back to haunt her... 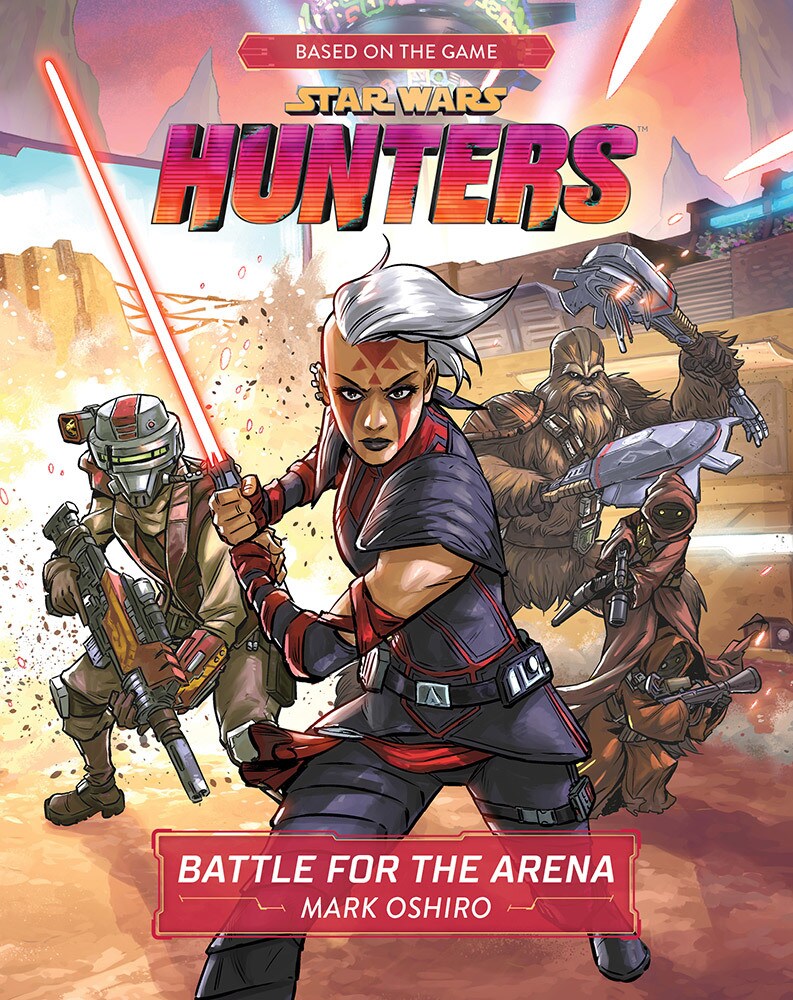 Recently, Oshiro sat down to talk about their love of Star Wars, how their life experience is woven throughout their writing, and why Grozz is their favorite of the Arena warriors.

StarWars.com: Congratulations on the book! A dark-side warrior is an interesting choice for the hero of your tale. What can you tell us about Rieve and her place in your story?

Mark Oshiro: Rieve is a walking mystery. She’s vague about her past, and she doesn’t like vulnerability. So becoming a Hunter seems like a good idea to her! She can disappear into this Sith Lord persona, and the Arena provides her an outlet for her quietly chaotic powers. She’s very much an anti-hero because she has no interest in others. 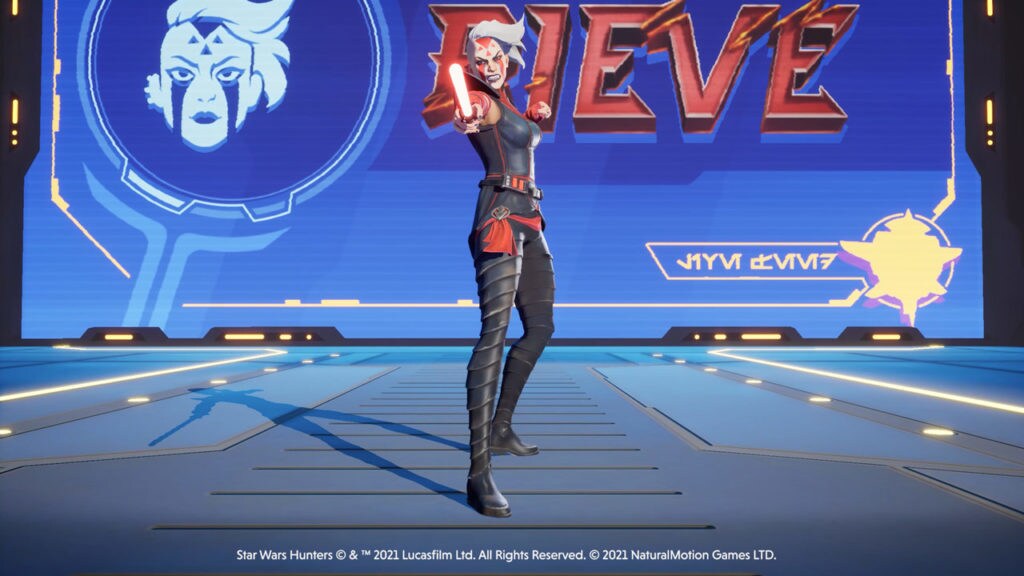 StarWars.com: As soon as I heard she was a charmer from Corellia, she reminded me of Han Solo. What existing Star Wars characters were you looking to for inspiration to capture her charisma and her strengths? What about her flaws and struggles?

Mark Oshiro: As we fleshed out Rieve, I was looking for inspiration from characters like Lando Calrissian, Jango Fett, and even Asajj Ventress from The Clone Wars. I love antagonistic people who have a reason for their antagonism. So I wanted her to be someone who, from another character’s point of view, might almost seem like a villain. As an orphan, she’s used to having to watch her own back, so one of her biggest flaws is her flat-out refusal to trust most people. It’s all part of her drive for self-preservation, but as you’ll see, it also does her a disservice.

StarWars.com: You previously wrote the account of a very sympathetic wampa in search of its clan in From A Certain Point of View: The Empire Strikes Back. What draws you to characters who are not routinely the focus? As someone who is queer, nonbinary, and latinx, how does your own life experience translate into your stories?

Mark Oshiro: A lot of that is rooted in what I’ve been through. People like me are so routinely ignored in mainstream fiction that I tend to be attracted to the outsiders. In Rieve’s case, it was so easy to slip into this character who has had to deal with feeling alone and abandoned. In particular, though, thanks to the suggestion and support of Lucasfilm, I got to write a character dealing with PTSD. Her past has a traumatic incident that directly influences her current state, so treating that with care and dignity was very freeing.

StarWars.com: How did you first get introduced to Star Wars as a fan? How does it feel to contribute more to the galaxy with your writing?

Mark Oshiro: My parents introduced it to me before I could actually remember watching them! Return of the Jedi came out just before I was born, and there is nothing I watched more growing up than that original trilogy. As a teenager, I discovered the novelizations and original novels, and I disappeared into the Heir to the Empire trilogy. So it is quite literally a dream come true to be able to write my own Star Wars story. 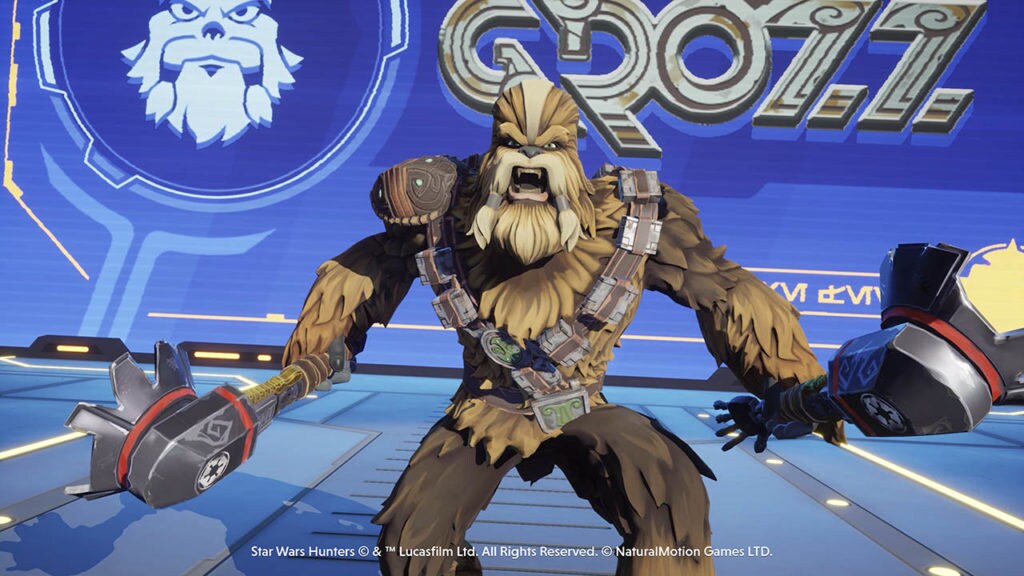 StarWars.com: Totally judging your book by its cover here, it looks like we'll also be spending time with Imara Vex, the Jawa twins Utooni, and Grozz the Wookiee. Who's your personal favorite among the arena warriors and why?

Mark Oshiro: Oh, Grozz. Absolutely. He’s a big goof who channels my childhood love of professional wrestling, but he also gets to have a fascinating relationship with Rieve. He was also a huge challenge to write because Rieve doesn’t speak Shyriiwook, so I had to come up with all these fun ways to have them communicate.

StarWars.com: What do you hope readers and gamers take away from the book?

Mark Oshiro: The power of found family. Rieve’s journey is one of self-acceptance, and I hope readers and gamers take that idea to heart. You deserve to be loved and appreciated.

Enter the arena when Star Wars: Hunters is released later this year, available as a free download for the Nintendo Switch, on the App Store and on Google Play, connecting players in real time to battle in arena settings inspired by familiar Star Wars locales.

Preorder your copy of Star Wars: Hunters: Battle for the Arena now!

And for more on this story and other news from around the galaxy, watch today's episode of This Week! In Star Wars!