Take a first look at new roleplaying releases, including Star Wars: Age of Rebellion and Star Wars: The Card Game!

Fantasy Flight Games, makers of Star Wars roleplaying and card games, has an exciting slate of new releases this month. Check out a special preview below!

Take on the sinister Galactic Empire as a member of the Rebel Alliance!

The 464-page Star Wars: Age of Rebellion Core Rulebook provides everything you and your friends need to wage guerrilla warfare across the Star Wars galaxy, face down legions of stormtroopers, or steal secret plans and restricted codes. No matter what role you play in the Rebellion, the fate of the galaxy rests in your hands!

The Core Rulebook features clear and concise rules for character creation, unique talents, skill checks, and combat. It also clearly describes the game’s narrative dice system, which uses custom dice to create an immersive story that grows and turns with each and every roll of the dice.

Blast deeper into the action of your Star Wars roleplaying campaign with the Star Wars: Age of Rebellion Game Master’s Kit!

The GM’s Kit includes a GM screen which provides a handy reference for a host of vital Game Master information. You’ll also find expanded rules for running military squads and squadrons, plus a complete adventure titled Dead in the Water, which challenges players to stand strong against the Empire, even after they’ve finished the adventure featured in the Core Rulebook.

Whether you’re waging epic space battles or chasing after the heroes in the twisting hallways of a heavily guarded Imperial base, the Star Wars: Age of Rebellion Game Master’s Kit has everything you need to keep your players focused on the action! One galaxy. Three games. One set of dice.

The Star Wars movies are full of dramatic twists and turns, and Star Wars Roleplaying Dice translate the action to your games of Star Wars: Edge of the Empire, Star Wars: Age of Rebellion, and the upcoming Star Wars: Force and Destiny.

Star Wars Roleplaying Dice come fourteen to a pack and allow players and GMs to quickly determine the success or failure of actions in the game, while advancing the story’s narrative with advantages and threats. 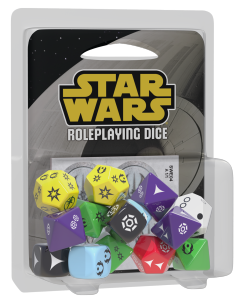 “The Force is what gives a Jedi his power. It’s an energy field created by all living things. It surrounds us and penetrates us; it binds the galaxy together.”
-- Obi-Wan Kenobi

It Binds All Things is the fifth Force Pack in the Echoes of the Force cycle for Star Wars: The Card Game, and it continues the cycle's progression deeper into the mysteries of the Force with ten new objective sets (two copies each of five different sets) that allow you to follow a new Jedi version of Leia Organa to the forest moon of Endor, experience the boundless loyalty of a Wookiee, or use fate cards in entirely new ways with the Empire's Imperial Navy.

Even as the different affiliations of Star Wars: The Card Game explore the possibilities offered by the Echoes of the Force cycle, you may discover that the best way to gain control of the Force struggle is a targeted offense that directly attacks your opponent’s Force-committed units. To that end, It Binds All Things also introduces one of the galaxy's most feared Bounty Hunters, the Assassin Droid IG-88.