The power of the Force came to LEGOLAND, and everything was awesome.

The Force came to LEGOLAND California earlier this month with the Carlsbad theme park’s annual LEGO Star Wars Days celebration. Fans came to enjoy a variety of special activities and attractions just for this event, including a major presence by the Star Wars costume clubs, a huge collection of creations by fan builders, and world premiere screenings of LEGO Star Wars: The Freemaker Adventures.

Both Saturday, June 4, and Sunday, June 5, LEGOLAND California opened with special fanfare and a procession of 50 members of the local chapters of the 501st Legion, Rebel Legion, and Mandalorian Mercs costume clubs. The gathered crowds watched at the gates as stormtroopers, Rebel pilots, Mandalorian bounty hunters, Ewoks, Sith Lords, Tusken Raiders, and Jedi marched into the plaza just inside the main entrance, topped off with a visit from Princess Leia and Darth Vader. The terrace connecting the entry area to the adjoining lands was busy all day with photo ops with costumed characters in front of the main lagoon, or in front of a special Death Star wall backdrop, made by the Imperial Sands Garrison of the 501st Legion costuming group. But it was more than just the Empire present, with kids and adults lining up to take photos with characters with Rebels, Jedi, bounty hunters, and even an R4 astromech droid! There were also some favorites from The Force Awakens including Rey, Finn, Kylo Ren, Han Solo, Poe Dameron, First Order stormtroopers, and even pilot Jess Pava. 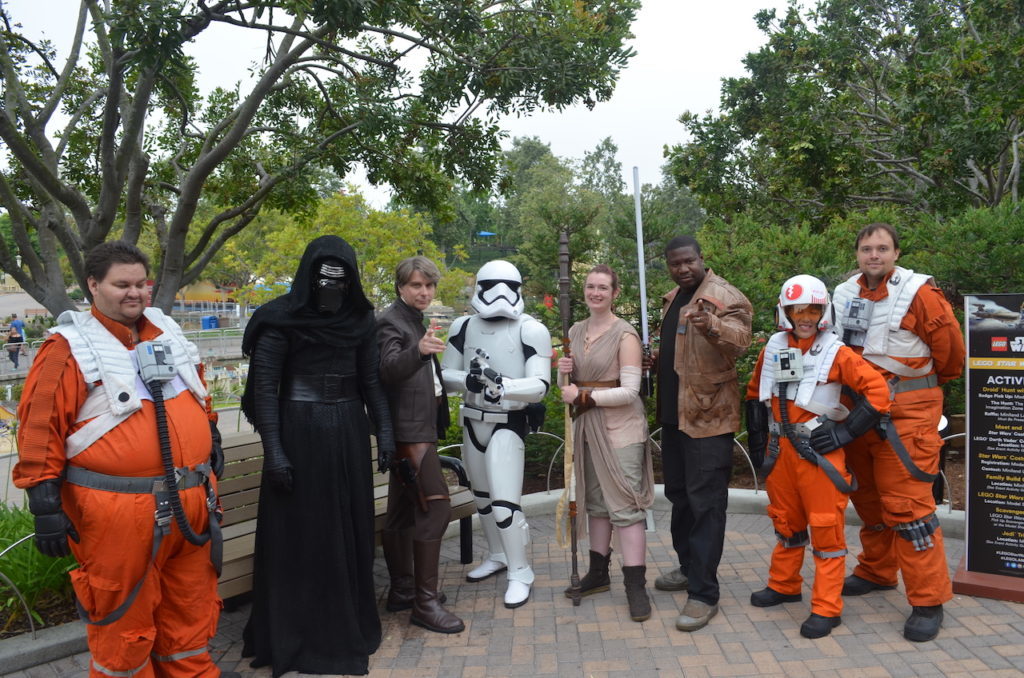 The fun with costumed folk continued over into LEGO Star Wars Miniland, where theme park goers could pose for photo ops with costumed fans in front of the cool dioramas from the saga. From standing with stormtroopers next to a 19,200-piece Millennium Falcon in Docking Bay 94 to encountering Qui-Gon Jinn near the plains of Naboo, to meeting Kanan, Sabine, and Ezra from Star Wars Rebels, there was a chance for everyone to find a favorite character. With plenty of members from the costume clubs present, you could return to LEGO Star Wars Miniland and discover an entirely new batch of costumed characters. Costumers came from all over Southern California to bring joy to the crowds at LEGOLAND. Not only were there fans in costume to ooh and ah over, there were fan-made LEGO creations to behold. On the patio on the roof of the Model Shop overlooking Miniland, fan LEGO models and photography were on display from almost 50 fan builders. Some model makers went to great length detailing faithful recreations of Star Wars locations and vessels like Maz Kanata’s castle, by Mary Applegate and Max Philippe, with towers and the courtyard, and two stories of minifigure scenes.  A group project had a display of mini-scenes, built by different individuals, that told the story of The Force Awakens, including a scene of Kylo Ren throwing a tantrum, by Peter Abrahamson.

Other builders added a bit of their own fun, like Mark Borlase, whose 150,000-piece “Death Star Scenes” diorama showed off different interior locations from A New Hope (including the Millennium Falcon in a hangar), as well as some additional rooms aboard the armored space station including a mess hall and a video arcade, which each room lit up! Andy Schwarz showed off his “Mini Star Wars Land,” his own little LEGO scale amusement park where Star Wars minifigures crowded around models of The Force Awakens ships, took photos in front of mini dioramas and rode tiny rides. He described it as a place where Star Wars characters might go on their break, and even could switch roles, showing off the Rebel pilots riding TIE fighters and Imperial pilots riding X-wings on a motorized aerial carousel. Jason Daubert showed off a few of his LEGO constructions, including a chess set made of characters from The Force Awakens, built in CubeDude style (featuring BB-8 with different colored highlights as light side pawns!) and both a BB-8 and Death Star with studs facing in all directions.

Some fan builders went even more whimsical, like a scene entitled “Vader and the Kids Day Out,” with builds of Vader and little Luke and Leia playing in a park, built by Mariann Asanuma. That blend of Star Wars and LEGO humor formed the lighter side of the Force, from Darth Unikitty to Jango Fett taking little Boba out in a wagon. Evan Ridpath built a giant diorama of the queue area of the Star Tours theme park attraction, complete with figures waiting in line. One of the highlights was a rotating scene showing a young Ben Solo playing with his family aboard the Millennium Falcon!

But there was more to LEGO Star Wars Days than just costume club meet-and-greets and checking out the awesome builds by some fantastic LEGO fans -- the theme park had a variety of special activities just for this weekend: trivia and costume contests, a Family Build Challenges, and a scavenger hunt in LEGO Star Wars Miniland. Plus a droid hunt game with the costume clubs, LEGO Star Wars video games in the Xbox room, meet and greets with LEGO Darth Vader, and sneak preview screenings of the upcoming new show, LEGO Star Wars: The Freemaker Adventures. Of course, all of this was in addition to the permanent Star Wars-themed attractions: LEGO Star Wars Miniland, which contains more than 1.5 million LEGO bricks forming dioramas from the first six Star Wars films and The Clone Wars, the LEGO Star Wars Gallery of large-scale versions of Star Wars minifigures, and the Death Star Model Display, featuring both an eight-foot-wide Death Star surrounded by dogfighting X-wing and TIE fighters and a build station around a giant model of the Death Star trench run.

In the Family Build Challenge, kids and their parents raced against the clock to build a model that fits a particular Star Wars theme. You couldn’t just dump a bunch of LEGO bricks on the table and call it Alderaan -- you had to use your imagination and building skills with the pieces given to come up with a creation that would beat the competition.

Attendees also had a chance to participate in a challenge to earn exclusive R2-D2 and C-3PO Pop Badges by answering questions about LEGO Star Wars Days and participating in some of the special activities, or posting on social media with the #LEGOStarWarsDays tag. With the Pop Badge Challenge and the Miniland Scavenger Hunt both requiring finding answers around LEGO Star Wars Miniland, fans could be spotted with their answer sheets while counting Rebel pilots in the Hoth diorama, looking at lightsaber blade colors in the Gallery, or trying to find an epic duel in Theed Palace in the Naboo diorama.
Plus, there was the special premiere of LEGO Star Wars: The Freemaker Adventures. On both days, audiences lined up to see the first episode of the new show coming to Disney XD, and came out happy! Star Wars fans young and old enjoyed watching the adventure of the Freemaker family of junk salvagers on the big screen in the LEGO Show Place Theater.

Fans didn’t leave LEGO Star Wars Days empty-handed. While some lucky fans might have gone home with prizes from the different contests, lots of fans picked up free LEGO Star Wars Days buttons featuring Chewbacca and Han Solo, as well as earned ribbons for the droid hunt or Pop Badges featuring Threepio and Artoo. The Force was definitely strong at LEGOLAND California, where everything was awesome!