Looking for a fuzzy Wookiee notebook, a talking Darth Vader action figure, or an R2-D2 plushie with revolving dome? Your search is over. 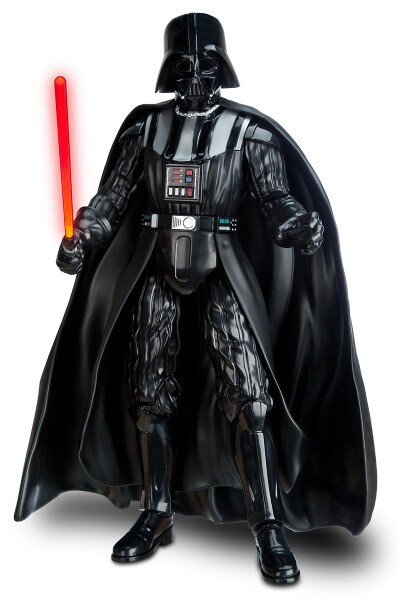 For a Star Wars collector like me, hearing about a plan for new Star Wars product can rub both ways. I’m curious and excited about what is going to be released, hoping that the items will be both cool and high quality, yet more than a bit concerned about finding a way to afford and display them -- even in a 9,000-square-foot former chicken barn! So imagine my feelings when I first heard about Disney Store -- an entirely new retailer that would be coming up with lots of exclusive merchandise!

Turns out I had no reason to worry. The initial merchandise -- which has been on shelves for several weeks -- easily meets my high standards. But beyond that, getting to meet and talk to some of the folks behind the Disney Store rollout of Star Wars has given me great confidence for the future of the merchandise they’ll be producing as well as the environment where it will be sold.

I always like to say that Star Wars fans are everywhere, and that’s particularly true of the Disney Store division, from bottom to top. There’s a reason employees at the Stores, Parks, and elsewhere are called “Cast Members,” because no matter the job, they are all working toward one goal: making sure that guests have a magical, fun, and entertaining time.

“There are only two movies I remember seeing as a kid,” says Nomi Vela, Disney Store project design director/boys and girls. “And it was Star Wars that I fell in love with.” Vela played with her Barbie dolls, but even though gender lines were fairly strictly drawn in the late 1970s, she also played with her older brother’s Star Wars toys as well as watched the original trilogy over and over when they arrived on video. “It really was one of the ways we bonded.”

When Vela heard the news that Disney Store would be developing its own exclusive merchandise, she realized that 37 years of Star Wars merchandise proceeded whatever her team came up with. “We looked at it through many filters, with two generations of designers, and we delved deep into the core: What is it about Star Wars that connects with us?” she recalls asking. “We wanted to design ‘cool’ intro products, knowing that we were producing for a wide age demographic. We really were creating based on our personal connections to the movies in order to come up with products that would be universal.”

I saw that in the R2-D2, Darth Vader, and fuzzy Chewbacca journals. When you open the Chewie notebook, for example, he roars -- but not loud enough to upset a classroom teacher. The ceramic mugs are amazing, all sized and shaped differently depending on the individual character. And then there are the 16-inch talking action figures. That’s in the hands of Brian Ewing, senior designer for Disney Store (and with a personal Star Wars collection filling about 50 storage boxes).

“The fantasy element hooked me as a kid,” Ewing recalls. “The spaceships, the settings, all the designs -- we had never seen anything like that. And it triggered something in me: I wanted to be able to make things like that.” Even at nine years old, Ewing started getting the Art of... books and admiring the work of concept artist Ralph McQuarrie. “When I first heard the announcement that Disney had acquired the Star Wars franchise, I got this tingling feeling. I just knew it was something I had to work on.”

Ewing notes that after the decision was made on the initial kind of products to offer, especially action figures that were the core of the original Kenner toy line, one of the key goals was to do something that hadn’t been done before. “We asked ourselves, how do you make an action figure really cool? You want it to look impressive, so that means larger, as accurate as possible with beautiful deco and crisp sound clips.”

Ewing and his team of 3D modelers worked closely with Lucasfilm consumer products on the hundreds of details that go to raise a product from merely good to great. Then came a tough decision: which characters to choose for the first wave? 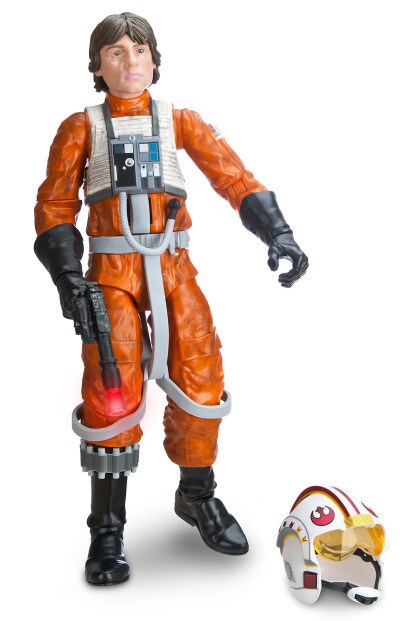 The final decision landed on characters from A New Hope, to take fans back to the original film. A key focus for Ewing was the line of Talking Action Figures that includes Stormtroopers, an X-wing pilot, Han Solo, and Darth Vader, who stands at an impressive 14.5”. “We knew the fans would be watching closely, but we also have our own very high expectations to meet.”

With the merchandise being developed, it became the job of Jonathan Storey, a 22-year Disney Store veteran, to prepare the Stores and the Cast Members. It was a task that the vice president of Stores for North America took on with relish, since he’s been a huge Star Wars fan and major collector since his childhood growing up in the small seaside town of Great Yarmouth, Norfolk, England.

He’s also a kindred soul, believing like me that Star Wars merchandise played a huge role in making the franchise the cultural phenomenon that it is today -- one celebrated by three generations of fans. “The movie was ahead of its time, but it was actually the toys that gave Star Wars its staying power,” Storey says. “I had nothing else to keep it alive, so I played out every conceivable story line. As a child, I think I rescued Princess Leia at least a thousand times.” Also like me, Storey possesses a collector’s gene, as becomes obvious from his photo in front of his collection.

Storey also remembers well the first time he stepped into a Disney Store, even before visiting his first theme park. “There was nothing else like it anywhere -- the music, the atmosphere, the escapism -- just like Star Wars was for me.” Storey’s devotion to the Disney Store is well known to his friends and family -- “They used to say you’ll be there all your life unless Lucasfilm offers you a job” -- that he looks back on hearing about the purchase of Lucasfilm in an “almost dream-like way. My e-mail inbox exploded!”

With a strong design and production team at work, Storey’s biggest responsibility was getting the Guest experience right. “Disney Store tells many stories, and we needed to bring a new one to life in a way that Star Wars fans of every age would appreciate,” he says. “We need to stay true to the story and maintain the history and integrity of the brand, but also introduce it to a whole new generation.”

The Cast Members in every store are the key. “It’s up to them to know the story and tell it with confidence; they’re not just selling an R2-D2 item, but a plucky little droid that saved the heroes throughout the saga.” Cast Members were immersed in Star Wars starting earlier this year. There were meetings; special Cast Member trading cards with major characters, vehicles, planets and weapons from Star Wars; trivia contests “backstage” where correct answers would bring an even more exclusive set of cards; and more.

In the Stores, clips and music have been added to the large Theater screens, there are free inflatable lightsabers to “train” with at special in-store events, and giveaways and prizes that started with a major launch on May the 4th. “I watched 25 children, lightsabers in hand, working near the screen of our in-store Disney Theater,” Storey says of that day. “So many of them were convinced they were using the Force to move and strike the training remote.”

And this is just the start. “We’ll continue to build on the experience with Star Wars Rebels and then Episode VII and beyond,” Storey says. “It will grow and evolve.” As will his collection and mine as we make room for some very exciting new Disney Store collectibles—made by fans for fans!

Steve Sansweet, head of Fan Relations at Lucasfilm for 15 years and now a Lucasfilm consultant, is chief executive of Rancho Obi-Wan, a non-profit museum that houses the world’s largest private collection of Star Wars memorabilia. To find out about joining or taking a guided tour, visit www.ranchoobiwan.org. Follow on Twitter @RanchoObiWan and www.facebook.com/RanchoObiWan.