Star Wars at The Tech: See Podracers, Learn How to Build a Real One

Can we actually make real Podracers, droids, and lightsabers? One big part of Star Wars' appeal -- for myself, and for many fans, I'd imagine -- is the sheer invention and creativity seen in the films. It's the ships and models filled with details, like scorch marks on X-wings and the unique look of every lightsaber hilt. It's the costumes that blend samurai influence and 1960s comic book art, but look timeless. It's the beauty of the designs, for characters and locales both good and evil. The magic of Star Wars is how all of that comes together to create an amazing world, inspiring wonder about how it was made -- and, to a greater extent, if Star Wars technology could be made real.

Star Wars: Where Science Meets Imagination, an exhibit currently installed at San Jose's The Tech Museum of Innovation, addresses lightspeed, droids, and all the technology from a galaxy far, far away. It also has many, many original artifacts from the entire saga on display, resulting in a hybrid movie history/future tech exploration of where art combines with science in Star Wars, and it excels at both. One exhibit looks at how a droid like R2-D2 might actually "see," and how it would be able to understand the number of people in front of it. (It converts raw data picked up from a camera into shapes, and is programmed to interpret those shapes in a very specific way. The robot on hand also has some choice pick-up lines, which is maybe more impressive.) 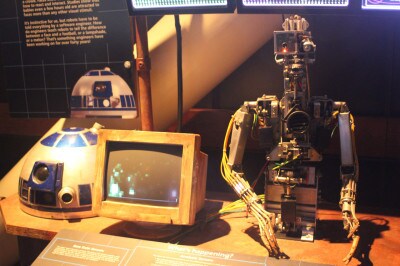 Another display shows Sebulba's Podracer model, which has an accompanying card explaining that its garish color scheme and huge engines were intentional design choices, meant to make it easier to pick out on the racetrack in The Phantom Menace. Nearby is an interactive lab where you're tasked to build an actual floating car; the lab explains that while Star Wars' repulsorlifts -- used in Podracers -- are fantasy, magnetic levitation (or maglev) is a potential technology for creating hovering vehicles in real life. Very fun, very cool stuff, and it's nice to know that maybe, someday, we might just have flying cars and craft. (Though I'd imagine traffic on the Brooklyn side of the BQE and on the Bay Bridge will still be terrible.) 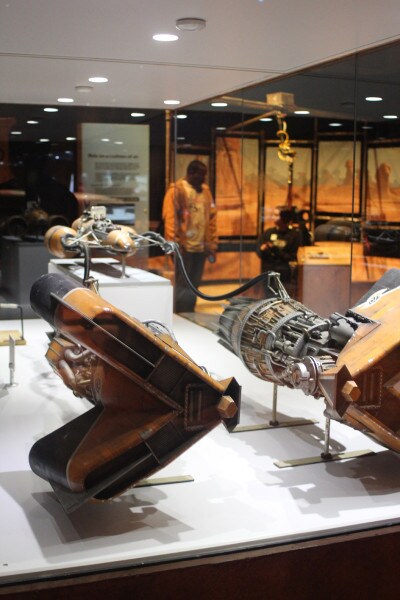 As dual science/Star Wars experience, the exhibit has attracted fans for different reasons. Christopher Salcido, 39, from San Jose, came for the chance to see certain original props for the first time. "I've seen a lot of different Star Wars exhibits all over the place," he says, "but I don't think I've seen the landspeeder that close. I enjoy the detail. You look at all the models, you think of all the kit-bashing that went into making them way back, it's really cool. I think that anyone who has a chance to come check out the exhibit should." 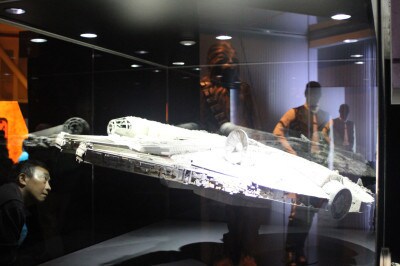 But does getting so close to what was seen on screen run the risk of ruining the illusion of the films? It doesn't seem so. "It makes me more of a fan," says Gregory Parks, 31, from San Jose. "I like to be able to see where they start from. When you see the landspeeder in person, and you see it with wheels, you realize they had to delete them. How did they do that? That's really interesting." 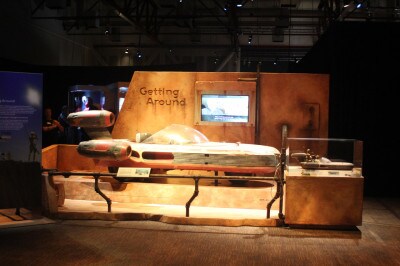 For longtime fans, the various displays offer lots of surprises. Parks was particularly impressed with the models from the prequel trilogy, not having realized that those films -- known for their CGI -- even used practical effects. The exhibit features Podracer models, droidekas, C-3PO's "naked" form puppet from Episode I, Queen Amidala's various costumes, and lots more. 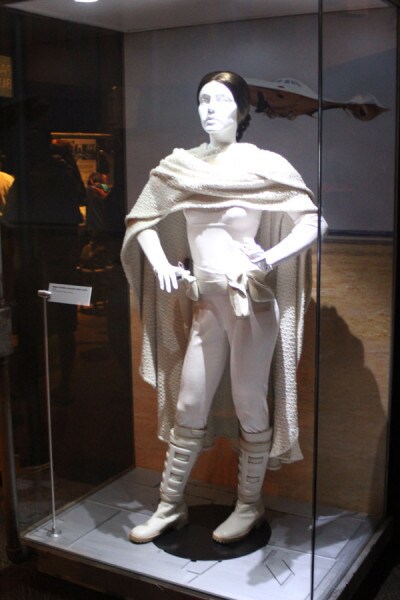 "I thought it was pretty awesome," Parks says. "There's a lot of stuff I haven't seen before. The models look amazing, and I love the way they incorporated showing the real technology that goes along with it. It makes Star Wars more accessible, and sparks people's imaginations to say, 'This is what we have in the movies. This is what we have now. How do we make those things come together?'"

That's the question posed at Star Wars: Where Science Meets Imagination. And hopefully, it inspires someone to make a real landspeeder or speeder bike. I know I'd love one, even if traffic still exists in the future.