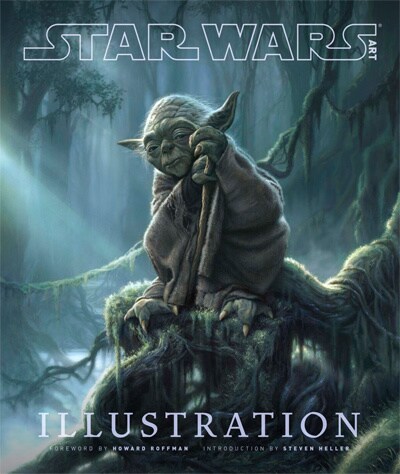 The third title in our Star Wars Art series is out: Illustration. This follows Visions and Comics. This book unites for the first time a lot of art that has appeared in a lot of places, some easily accessible, some hard to find, from limited edition prints to licensing artwork to everything in-between — by artists such as the legendary Ralph McQuarrie, Jerry Vanderstelt, Christian Waggoner, Paul Youll, Brian Rood, Terese Nielsen, Tsuneo Sanda, John Alvin, Dave Dorman, Hugh Fleming, and many talented folk.

It also has a foreword by Howard Roffman (until recently, president of Lucas Licensing), who writes, “I never imagined that the body of art inspired by Star Wars would be as vast as it is today or that a special selection of it would be hand-picked by George for presentation in a book like this. Twenty-five years ago that would have seemed like a crazy dream. But, after all, this is Star Wars and, with enough faith and determination, dreams can come true.”

Indeed this collection was curated by George Lucas. Then Abrams — editor Eric Klopfer and designer Liam Flanagan — did their usual stupendous job arranging the 150-plus artworks in an artful and logical manner. A crack crew here at Lucasfilm was tasked with finding dozens of the originals that usually hang on our walls. These had to be unframed, photographed at ridiculously hi-res, and then re-framed and re-hung.

At least one artwork made it into the book at the last moment. Every morning I walk past Hugh Fleming’s “Star Wars Rocks” (below). One day my sleep-deprived brain actually awoke and sent me a message: Hey, stupidissimo, that classic painting has slipped through the cracks! So, still in a mostly awake state, I put it in a memo to George ASAP. He said okay, and we got into the book at the last moment. 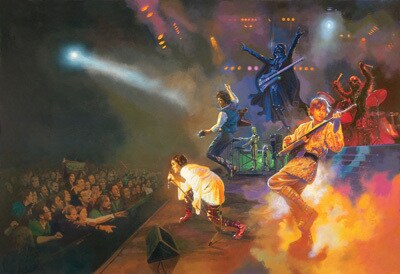 There’s also an introduction by the co-chair of the School of Visual Arts, Steven Heller, who writes: “Star Wars is a touchstone for illustration of an otherworldly kind. This collection of images fixes it among other seminal popular culture tales and characters that have been illustrated in scores of ways by hundreds of known and unknown artists.”

And this book ain’t the last one. As plans now stand we have at least two more to go in this series. The next will be out fall 2013 and may be the best yet! Abrams already has 98% of the artwork and I’m meeting with George tomorrow to show him the last 2%...

Next: What Happened to my Other Sock?

(A numbered Limited Edition of the book is available as well, which comes with even more illustrations, sketches, and five signed prints by: Brian Rood, Tsuneo Sanda, Jerry Vanderstelt, Christian Waggoner, and Paul Youll.)