Hello, what have we here? Get a first look at a galaxy of stories related to the upcoming film.

Entertainment Weekly took us inside Solo: A Star Wars Story, and now they're blowing the blast doors on the books and comics related to the film. The lineup looks scoundrel-riffic (which should totally be a word): a Han and Lando novel, a new Lando miniseries from Marvel, and tons more. Punch it, and check out covers and descriptions below.

In a story spans the decades, from a time before Han and Lando ever met, to a time after the destruction of the Empire, Star Wars: Last Shot features the two biggest scoundrels in the New Republic on their most dangerous adventure yet.

The Empire has been destroyed and smuggler-turned-war hero Han Solo is trying to adjust to domestic bliss with his wife Leia and young son, Ben. Enter Lando Calrissian, who needs Han’s help or all life on Cloud City will be annihilated. Lando is being hunted by a gangster known as Fyzen Gor, and to no one's surprise, it's actually Han's fault. Not long after Han met Chewie and completed the Kessel Run, he and Sana Starros cheated Gor out of getting his hands on a mysterious device. But Gor only knows the culprit was the owner of the Millennium Falcon: Lando Calrissian. In the present, Han and Lando must put together a team, including everyone's favorite Wookiee, to put a stop to Gor and his nefarious plans. Along the way Lando will realize that he has his own connection to the device, one that goes all the way back to his own days flying the Falcon with the droid L3-37.

Han and Qi’ra don’t have a lot in common other than not having a lot. They’re street kids on the industrial planet of Corellia, doing whatever it takes to get by, dreaming of something more. They each jump at a chance to prove themselves in the perilous world of Corellia’s criminal underbelly, only to discover they are on the same mission for the same unscrupulous boss. When the job goes disastrously wrong, Han and Qi’ra are on the run--from pirates, a droid crime syndicate, the Empire, and their boss—and will have to learn to trust each other if they have any chance of surviving. 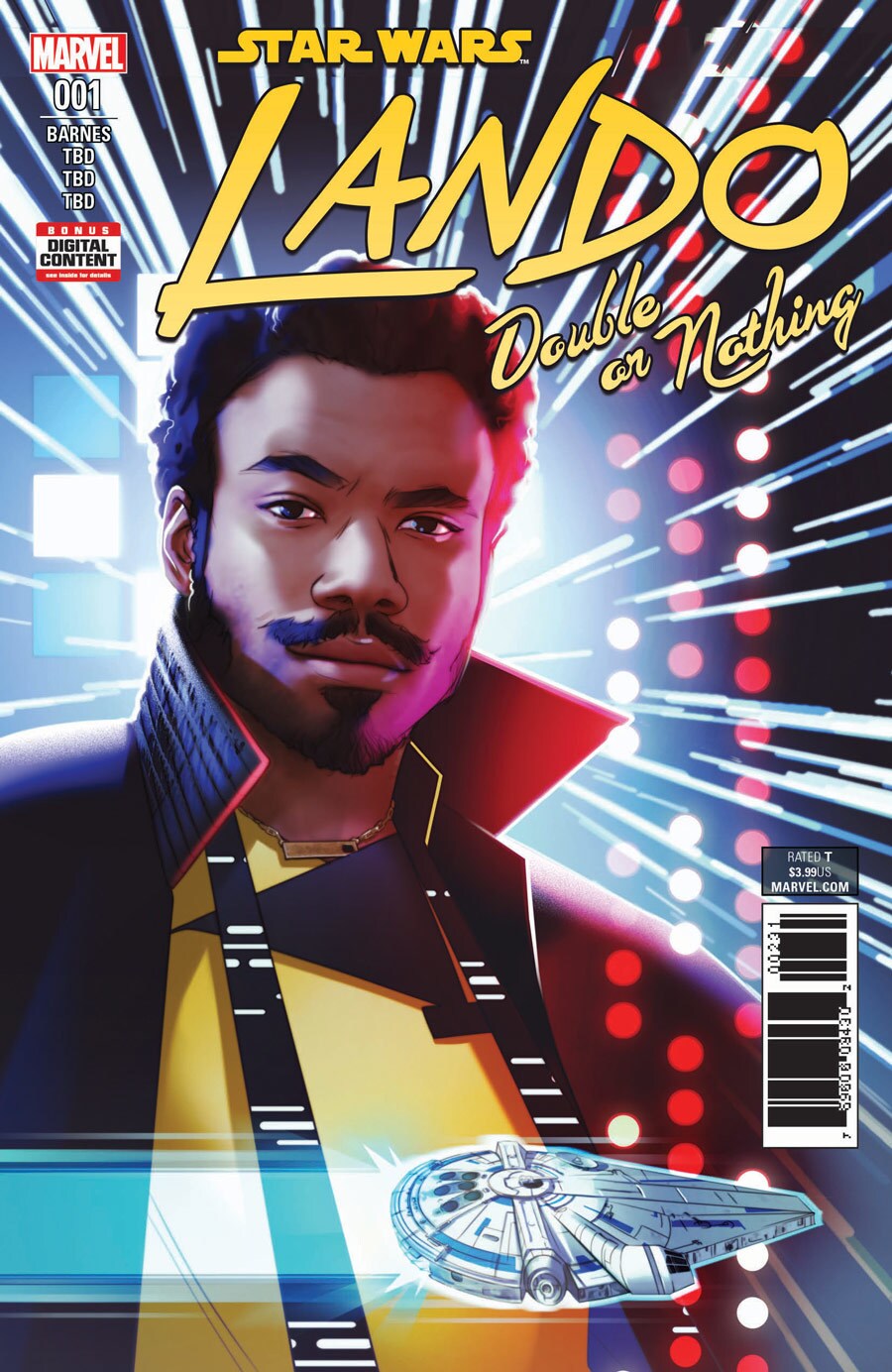 When a beautiful crime lord commissions the galaxy’s most talented smuggler to help free her people enslaved by the Empire, Lando Calrissian must wager it all on an impossible mission fraught with danger. Set just prior to the events of Solo: A Star Wars Story, our charming scoundrel must face Imperial forces with the help of his ship the Millennium Falcon in a deadly race against time. But even with the deck stacked against him, Lando can’t help playing the odds. When Chewbacca finds out that a job he thought was simply ferrying a ship full of tooka cats is actually much more dangerous, he’s excited to have something to do! But when he, a young bounty hunter librarian, and a droll cargo droid—whose real name, unbeknownst to the others, is K-2SO—land in the middle of a blue forest that seems to emit a fear-causing mist, Chewie realizes this job might be a bit too dangerous for his liking. He and his new friends will fight snarlers and sniffers and their own fears as they try to recover a sacred book—and save Han Solo in the process! A Wookiee is a girl's best friend! When Chewbacca meets young Zarro on an Outer Rim planet, he has no choice but to set aside his own mission to help her rescue her father from a dangerous mine. 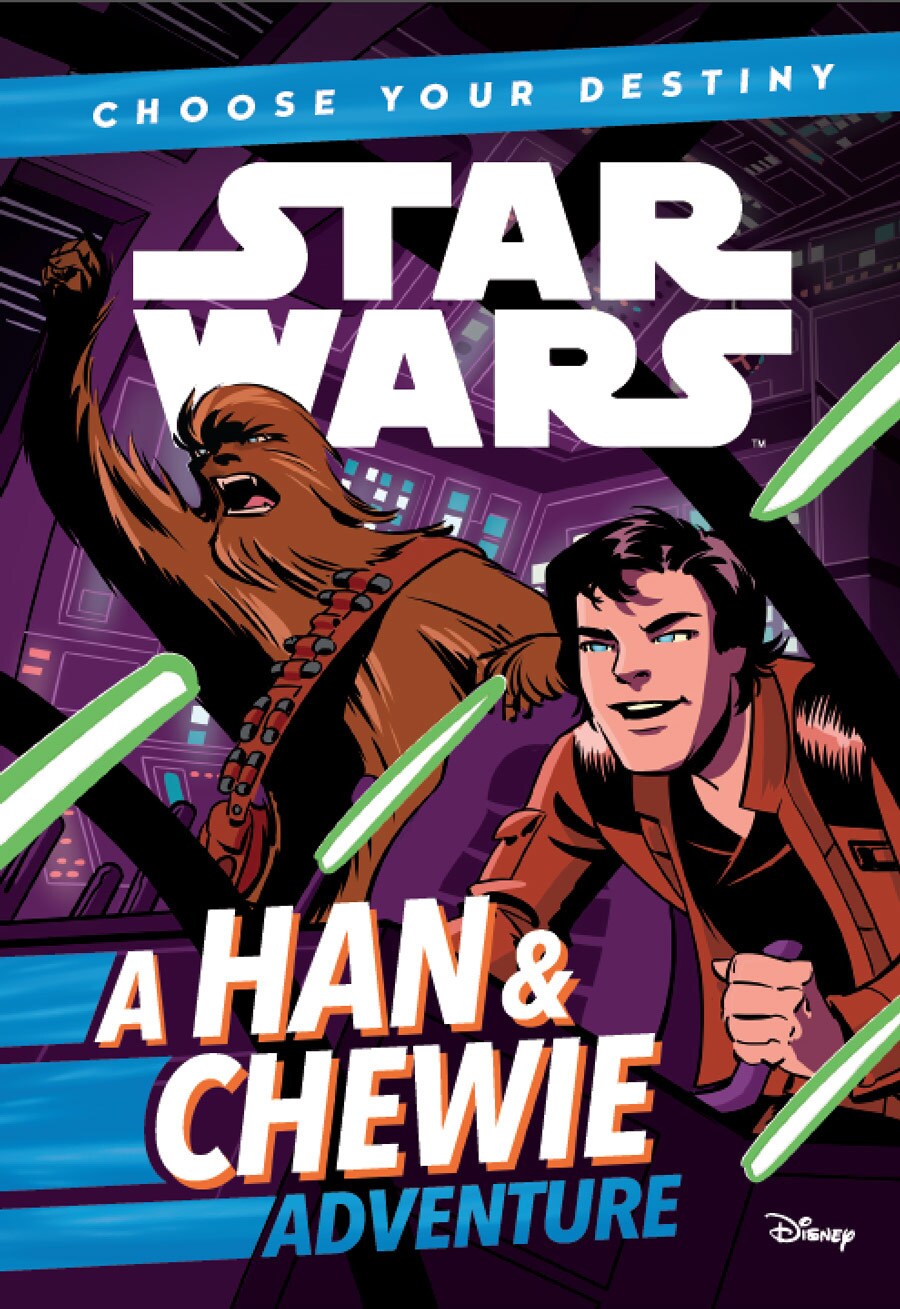 Jump inside the Millennium Falcon and help Han and Chewie as they journey across the galaxy on a simple smuggling job. But nothing is ever simple with Han Solo, and when things go wrong, Han pretends to be Jabba the Hutt to save himself, Chewie, and the Millennium Falcon. And that’s when things go from bad to worse! With over twenty possible outcomes, readers will have to think like a true smuggler to keep Han and Chewie safe from Imperial TIE fighters, Mandalorian mercenaries, and so much more! With so many different story paths, the adventures never end!

Meet Han, Chewie, Lando, Qi'ra and the rest of the crew from Solo: A Star Wars Story. 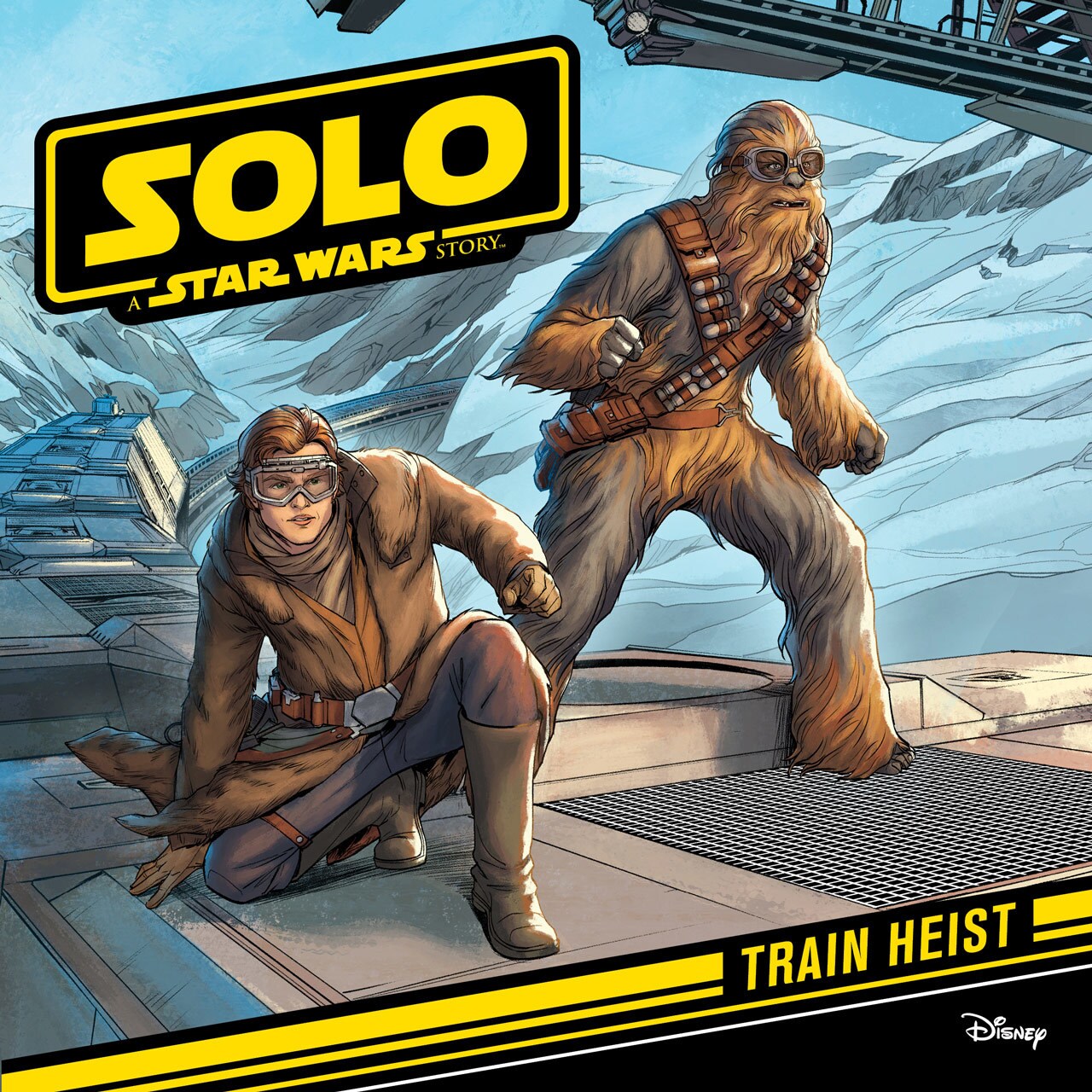 Han Solo and Chewbacca the Wookiee must team-up for a daring train heist on the planet Vandor! Han Solo thinks he has an easy smuggling job—until bounty hunters Zuckuss and 4-LOM arrive with their sights set on Han’s cargo—and Han. But Han just might have a trick or two up his sleeve to save himself and finish the job. “Powered Down” Part 1 of 2. Han and Chewie are on the run from bounty hunters and take refuge on a planet that mysteriously shuts down all electronics. With no way off the planet, will our favorite scruffy duo be able to evade their pursuers and save themselves? “Powered Down” Part 2 of 2. Han & Chewie must work together with bounty hunters Zuckuss and 4-LOM to battle a horde of insect-like droids before they’re all powered down—for good! 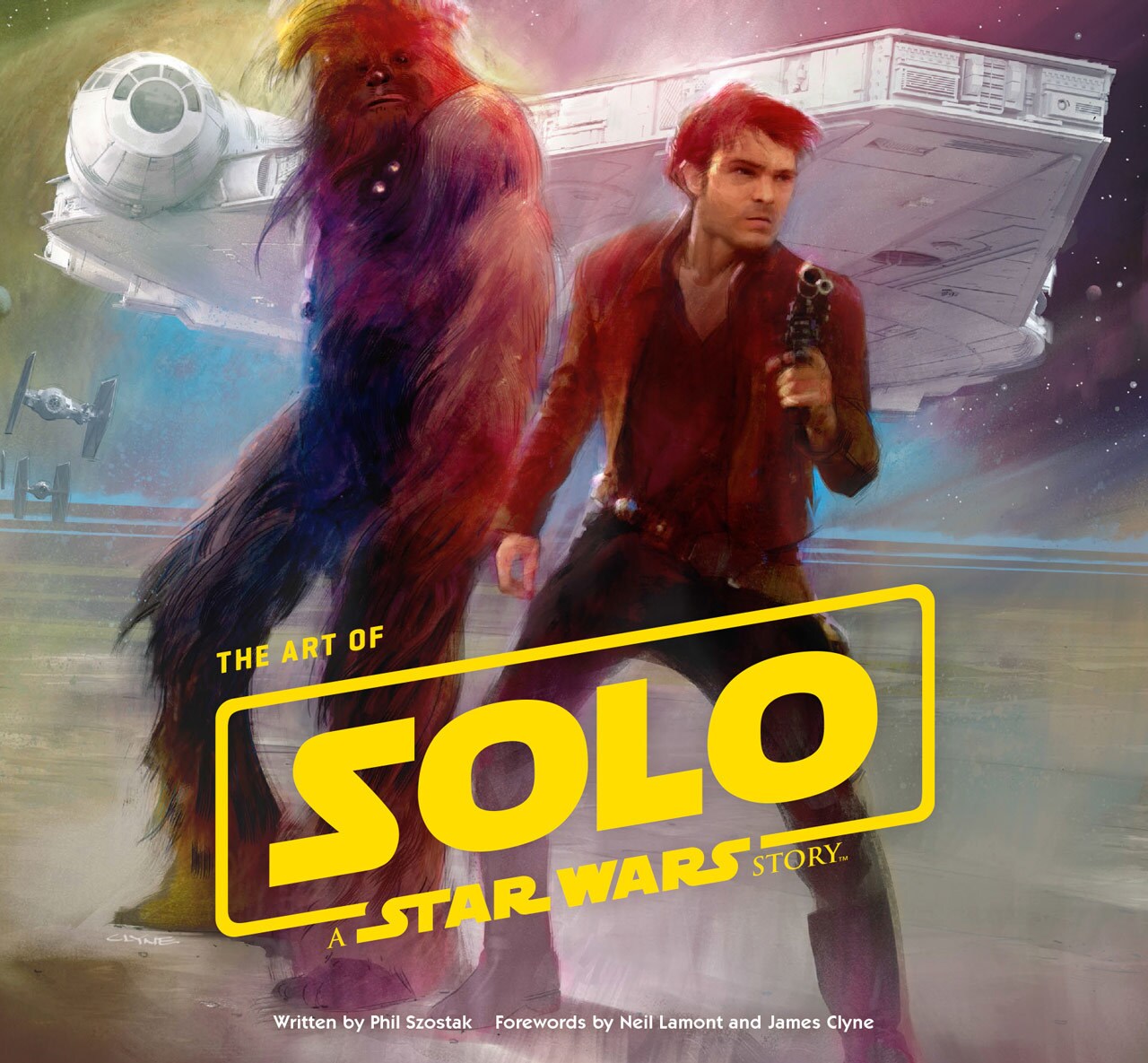 This essential visual guide to Solo: A Star Wars Story explores the world of young Han Solo in unparalleled detail. An authoritative companion to the latest Star Wars movie, Solo: A Star Wars Story The Official Guide features the fascinating planets, vehicles, and aliens that Han Solo encounters on his early adventures. Explore key characters, locations and props in captivating detail with extensive production photography and see the iconic Millennium Falcon as its never been seen before, in an exclusive cross-section artwork by Richard Chasemore.

The collector’s guide to Solo: A Star Wars Story, featuring profiles on the characters, ships, and worlds from the new film! 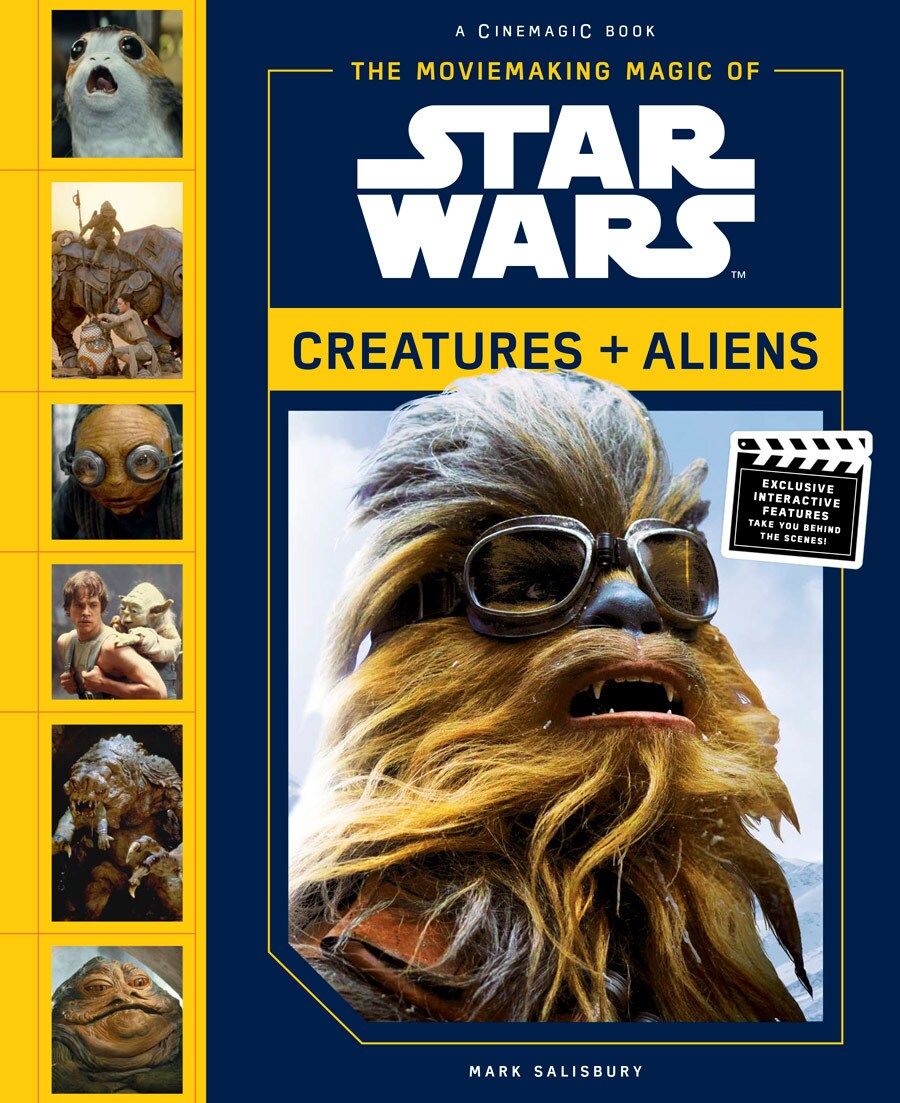 Go behind-the-scenes of the biggest movie franchise of all time in this immersive and interactive book to see how favorite characters—Chewbacca, Yoda, Jabba and more—were created from concept to screen. This collectible book includes 20 special interactive elements, including six-page booklets, accordion folds, and flaps that reveal the magic behind the movie with concept sketches, molds, digital imagery and more! Includes creatures and aliens from all 10 Star Wars films from A New Hope to Solo: A Star Wars Story! Young readers will love this Han Solo book, packed with characters and adventures from the new Star Wars movie, Solo: A Star Wars Story. Discover the new heroes, villains, aliens, droids, and vehicles from the movie, plus fan-favorites Han, Chewie, Lando, and the Millennium Falcon. Improve your reading skills while learning about the world of young Han Solo. Solo: A Star Wars Story Han on the Run is a Level 2 Reader packed with fun facts for kids who are beginning to read. It is part of an innovative DK series of leveled reading books that combine a highly visual approach with engaging non-fiction narratives. Adventure through the galaxy far, far away as Han Solo meets the friends and foes that will shape his destiny. Hear 7 exciting Star Wars sounds as you explore characters, vehicles, and more from Solo: A Star Wars Story.

Join Han Solo and his friends, old and new, as you search for hidden treasures – and dangers – in 8 beautifully illustrated scenes from Solo: A Star Wars Story. Then blast to the back of the book for even more Look & Find challenges. Discover more about your favorite characters from Solo: A Star Wars Story, as you read and place stickers in this amazing 32-page sticker album. Features 200 stickers from the new film! Blast off for adventure in the Millennium Falcon with Han Solo and Chewbacca, in this fun-packed activity book based on the new film, Solo: A Star Wars Story. With puzzles, games, fact files, and over 50 stickers! Meet the new heroes, villains, droids, and creatures in this coloring book based on the new film, Solo: A Star Wars Story.