Go under the hood of the classic prequel craft, now the ship of choice for the Mandalorian.

In “Ships of the Galaxy,” StarWars.com celebrates all the different kinds of craft across the saga. Strap in, punch it, and join us for the ride.

In Chapter 5 of The Book of Boba Fett, an iconic spacecraft from the days of the Galactic Republic made a surprise, triumphant return: the Naboo N-1 starfighter. Even with the tarp over the half-complete vessel, its unique design was instantly recognizable. (Of course, Mando made his own special modifications.) Let’s take a closer look at the N-1 starfighter and what makes it so wizard.

The Naboo N-1 starfighter made its in-universe debut in Star Wars: The Phantom Menace, a new style of fighter that was very different than what had been seen in the saga up until that point. “The N-1 is one of my favorites,” Doug Chiang, vice president and executive creative director of Lucasfilm, who was a concept artist for The Phantom Menace, told StarWars.com on the film’s 20th anniversary. “That was a big risk for me because I knew that Naboo had a lot of water and, for some crazy reason, I thought, “Okay, maybe their ships should have an aquatic feel.” That’s why there is a boat-like hull bottom. I was originally thinking that the N-1 would actually land on water, and that’s why it has that. That’s why it doesn’t have landing gear." 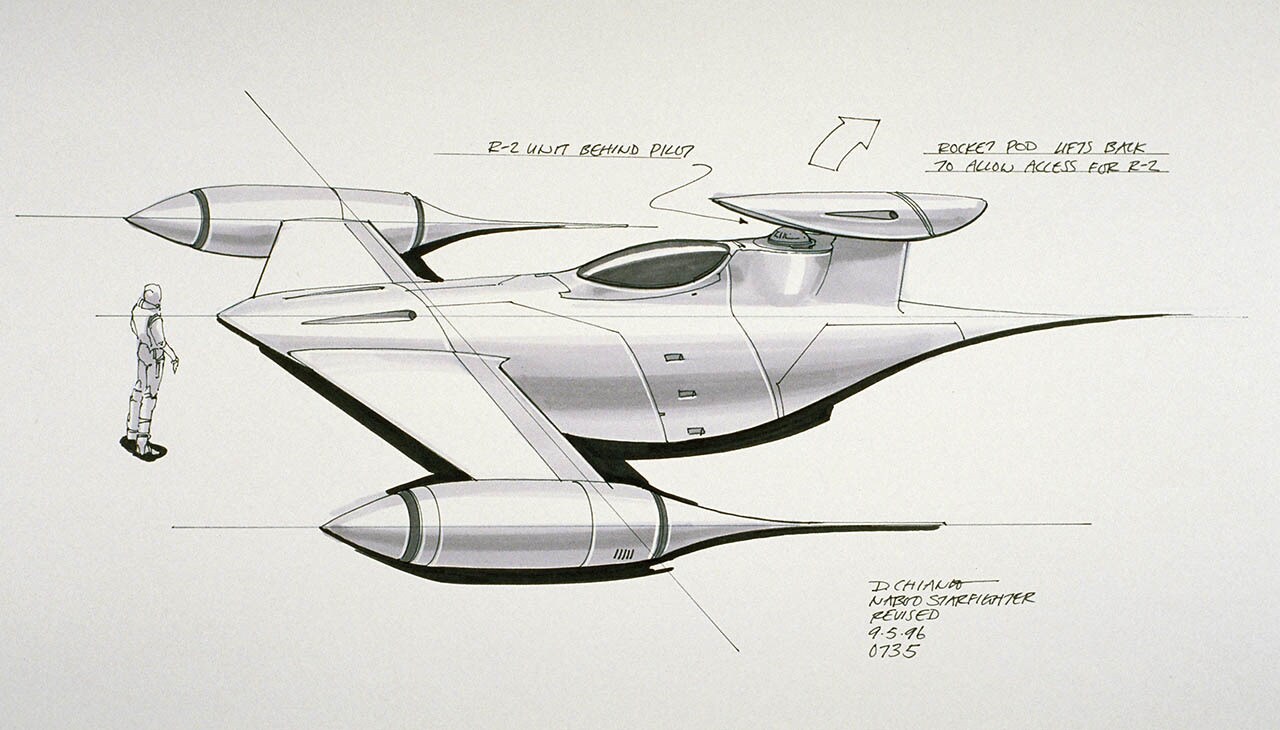 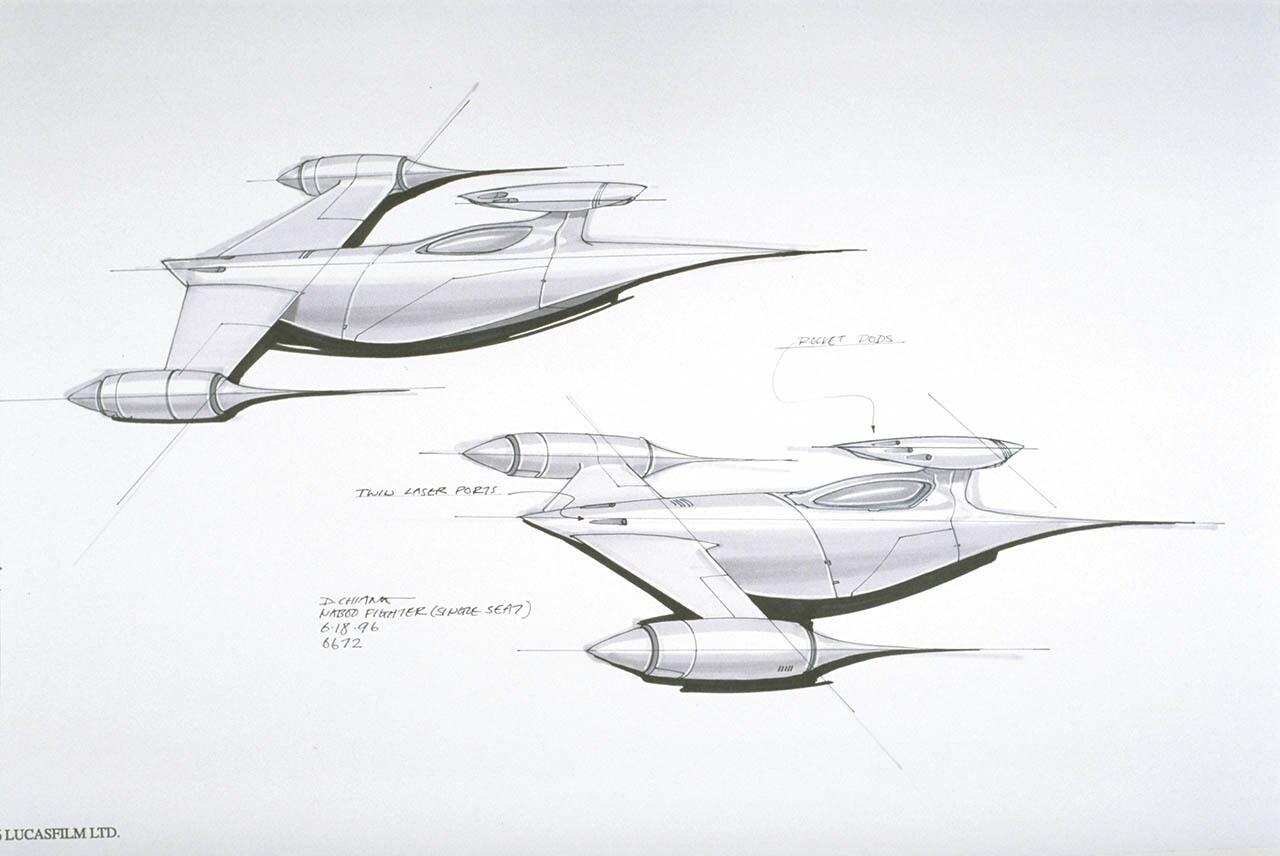 The design proved to be an outright success -- an elegant starfighter for a more civilized age.

“It was iconic, it was simple to read, you could tell what it was, and it was fresh,” Chiang said. “I was very happy that George [Lucas] actually liked it and actually wanted to push it even further by making it a bold color.” A few practical models of the N-1 were built for the prequel trilogy, and it was added to Star Wars: Return of The Jedi as part of the galaxy-wide celebration commemorating the defeat of the Empire for the DVD release of the original trilogy. 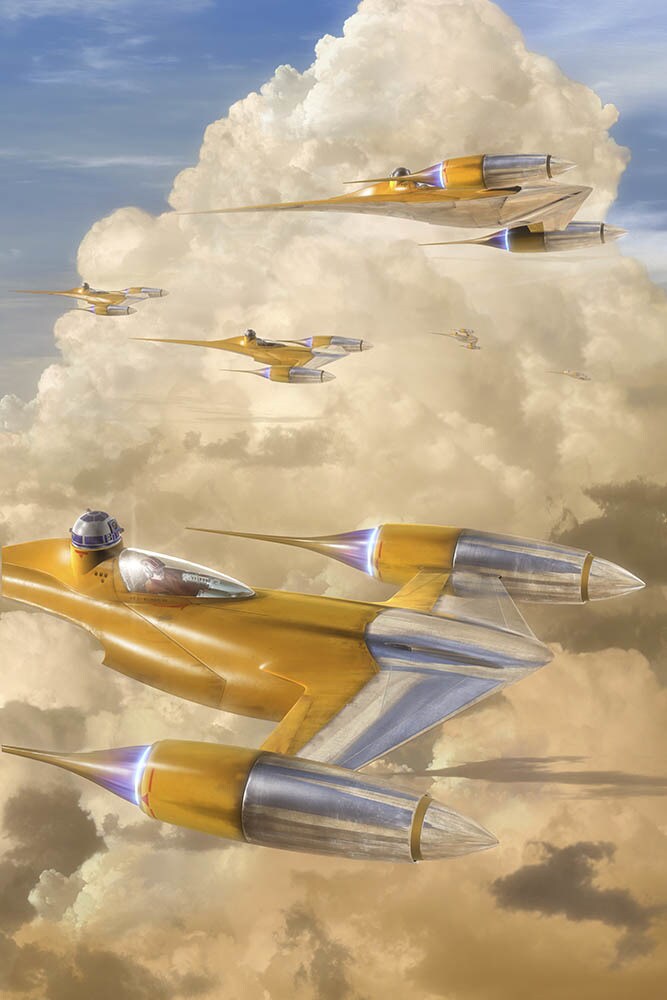 The look of the N-1 embodies the cultural aesthetics of the people of Naboo. Much like the planet it patrols, the design demonstrates the art and beauty valued by its inhabitants. The striking yellow encompassing the majority of the ship is contrasted by the chrome on the nose. It’s powered by two J-type engines, allowing for speed and optimal maneuverability. It can also jump into hyperspace without the assistance of a docking ring, making it one of the faster ships in the galaxy. If you need a quick getaway, this is the ship you’re looking for.

In addition to speed, the N-1 is equipped with twin laser cannons and two fire-linked torpedo launchers, making it formidable in aerial combat. There’s also a socket at the rear of the vessel for an astromech to assist with onboard duties, but this can be removed and refurbished based on the pilot’s preference. And for those particularly long journeys, the autopilot feature can come in handy, as well. What the N-1 starfighter lacks in size (holding only a single pilot), it makes up for in other areas valued by pilots.

In The Phantom Menace, Anakin Skywalker’s first moment of heroism occurs during the Battle of Naboo when the Force-sensitive child finds himself accidentally trapped within an N-1. He inadvertently hurtles through space, but soon takes control and brings down a Droid Control Ship, ensuring the invasion of Naboo by the Trade Federation is short-lived.

As seen in Star Wars: Attack of the Clones, three N-1s escort Senator Padmé Amidala to Naboo to vote on the Military Creation Act, with one ultimately destroyed by a saboteur. And as depicted in Star Wars: Forces of Destiny, Ahsoka Tano trains Amidala in aerial combat maneuvers, using an all-chrome N-1 starfighter. During Operation: Cinder in the Star Wars: Shattered Empire comic, Leia Organa (alongside Shara Bey and Queen Soruna) flies an N-1 to blow up some Imperial satellites and save her mother’s homeworld. The circle is complete.

Video game fans may recall that PlayStation 2 and Xbox owners could fly the starship in Star Wars: Starfighter, as well as in Nintendo 64’s Battle For Naboo.

Finally, in The Book of Boba Fett, Din Djarin, known to many as the Mandalorian, replaces his destroyed Razor Crest with a now-vintage N-1 starfighter. Alongside friend and mechanic Peli Motto, he customizes the classic ship with a turbonic venturi assimilator from a Galactic Republic-era starfighter. On this specific ship, the vapor manifold is missing, but this will only strangle the thrust capacitor, so Peli fabricates an induction intake charger to double the spacecraft’s output coefficient (which will not blow the shaft out of the pilot’s motivator block, despite the Mandalorian’s concerns, due to Peli reinforcing the compression housing). In other words, this modified N-1 starfighter is even faster than the classic design. Plus, the new paint job makes the ship looks like the Mandalorian’s armor, which is, simply, cool.

The Naboo N-1 starfighter has made an impact in several Star Wars stories, and with its bold, minimalist design, is a classic in any galaxy.

Dan Zehr is the host and brand director of the fan podcast Coffee With Kenobi, your spoiler-free place for Star Wars community and conversation. He is the co-author of The Star Wars Book and the Star Wars Character Encyclopedia Updated and Expanded Edition, and is a high school English teacher, with an emphasis on Mythology and Composition, and has an MS in Teaching and Learning. Follow him on Twitter @MrZehr.