Get an early look at the upcoming book with insights from the creative team!

Rebel Starfighters Owners' Workshop Manual, a look at the history of Rebel Alliance and Resistance fighters, arrives November 12 from Haynes Publishing and Insight Editions, the team behind Millennium Falcon Owners' Workshop Manual and TIE Fighter Owners' Workshop Manual. The book is a deep dive into a galactic alphabet of starfighters, including A-wings, B-wings, X-wings, and more, featuring design origins, production, and modifications for each rebel starfighter, and is fully illustrated with photographs, schematics, and exploded diagrams. StarWars.com caught up with writer Ryder Windham and artists Chris Trevas and Chris Reiff to get an inside look -- literally -- at some ships from Rebel Starfighters Owners' Workshop Manual, including a peek at the new Y-wing from Star Wars: The Rise of Skywalker, as well as their own commentary on how these pages took flight. Helmets on and buckle up.

Ryder Windham: To illustrate how an X-wing's Strike foils, or S-foils, unfold, I selected two sequential still frames from the original theatrical version of Star Wars [from 1977]. At George Lucas's instruction, Industrial Light & Magic revised the special effects for this scene in [1997's] Star Wars: Special Edition, and made the X-wings break out of formation while their wings unfolded. Because Lucasfilm considers the revised version "canon," I didn't know whether they'd allow Haynes to use the earlier still frames, but I'm glad that they did, simply because the original version more clearly illustrates the X-wing's S-foils in operation.

Chris Trevas: It was important to us to include classic Star Wars model photos alongside newer digital imagery in page layouts. We really draw from all of Star Wars history including the scenes we grew up with to the newest movies and cartoons.

Chris Reiff: We talked for a while about how to handle the S-foils illustration in the books. For a time we were going to do big cut-away renderings of the actuator system itself in the T-65 complete with servos, hinges, etc. In the end though, we liked the continuity that the more diagrammatic S-Foils illustrations brought to the other vehicle sections of the book, and how the style of those pieces mirrors the combat maneuvers style illustrations from the TIE manual and the flight controls illustrations from the Falcon manual.

Ryder Windham: The A-wing IncrediBuilds book [from Insight Editions] and The Last Jedi: Incredible Cross-Sections [from DK Publishing] provided a few bits of data about the RZ-2 A-wing's swivel-mounted weapons, but I still needed to fill the designated space for text on this spread. So I invented the additional info about how these weapons presented certain engineering challenges.

Chris Trevas: Each ship section has a special art focus on a different type of weapon and here we detail torpedoes and missiles. The A-wing, being an interceptor, would most often be armed with ship-to-ship missiles. After a lengthy and very nerdy discussion, Reiff and I determined that the launchers could also accommodate torpedoes when needed.

Chris Reiff: Doing up 3D files for each of the projectiles and talking through the deeply geeky, in-universe logic of how these systems work -- even when all that thought doesn't get written or shown explicitly -- is part of what we love about working on these books. We personally learn the Star Wars universe better with each project because we do a deep dive on all the little minutiae to make sure the bigger picture feels more cohesive and rich. It's more usual than not that we have an explanation for what every hose, switch, and light are for in the illustrations, whether or not they make it into a call-out list. One of these days we'll have to do a book just about the warning labels and placards of Star Wars that we think through. 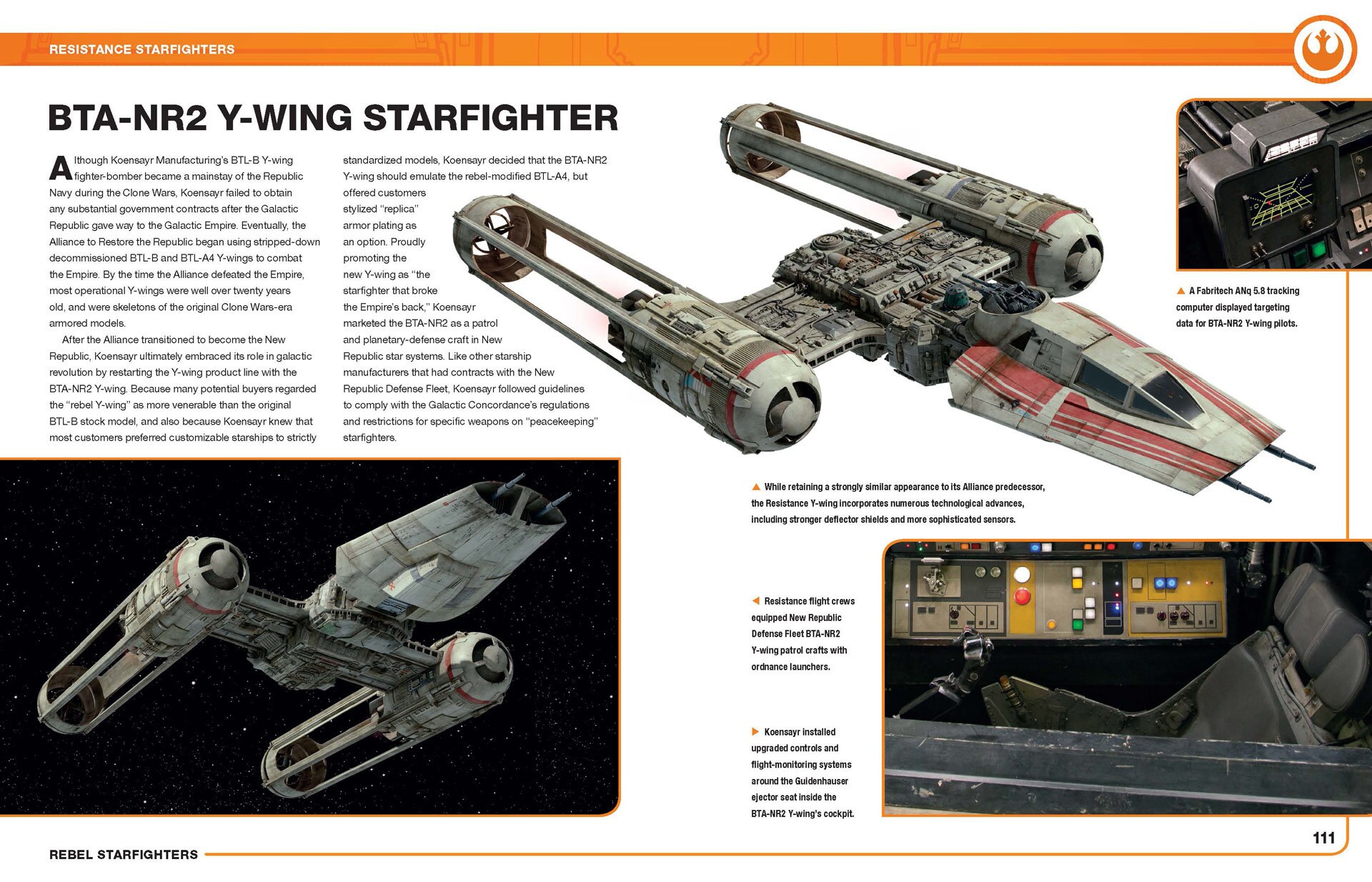 Ryder Windham: The moment Chris Reiff and Chris Trevas noticed a Y-wing starfighter on an advance poster for Star Wars: The Rise of Skywalker, they became obsessed with including the Resistance Y-wing in the Rebel Starfighters Owner's Workshop Manual, even though we had no idea whether Lucasfilm would provide information and high-resolution images of the new Y-wing in time for us to meet our deadline for Haynes Publishing. Fortunately, Lucasfilm came through, and we're all very pleased that our manual offers Star Wars fans something of an exclusive preview of the BTA-NR2 Y-wing.

Chris Trevas: Drawing and labeling the new Y-wing blueprints gave us a chance to note its similarities and differences compared to the classic Y-wing. Since the ship doesn’t have visible torpedo launch tubes, we’ve marked those as optional extras.

Chris Reiff: Drawing the blueprints for the new Y was a blast... With the reference we use and the level of detail we are including I could really get a sense for how hard the modelers and designers worked to make these new designs reference and complement the classic trilogy ships, as well as early [Colin] Cantwell and [Ralph] McQuarrie design cues. PLUS all those digital greeblies! Who doesn't want to see greeblies in Star Wars? 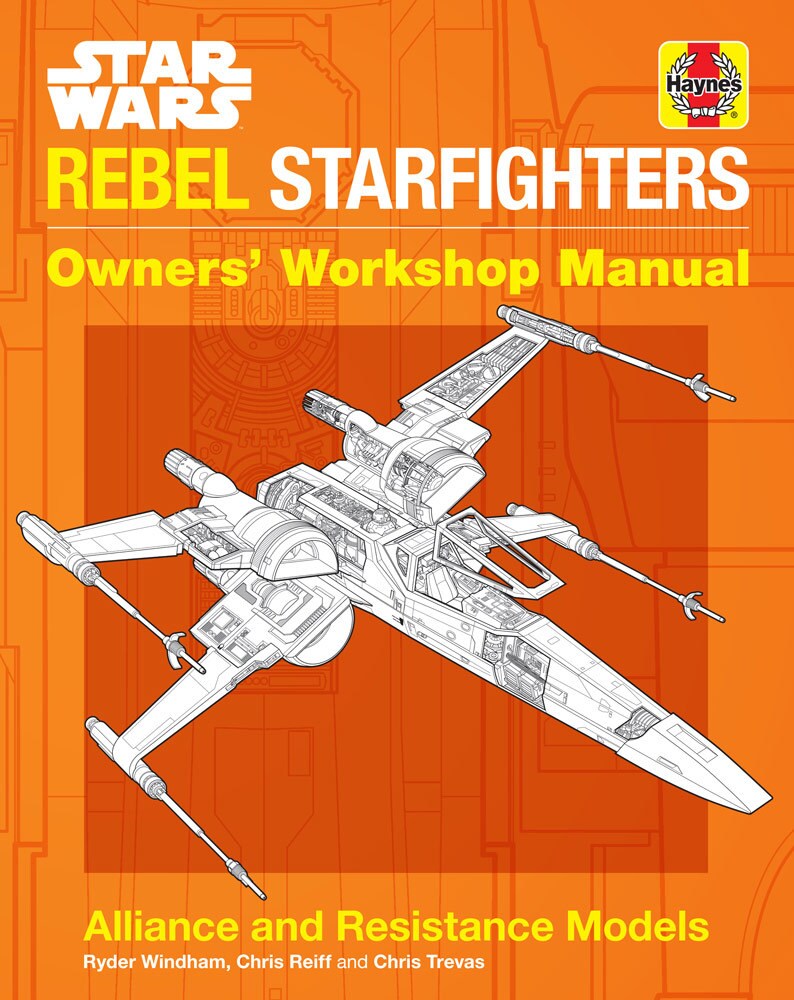