In a special panel, veterans discussed the positive role that Star Wars plays in their lives.

Closely following the Celebration opening ceremonies on Thursday afternoon, I had the honor to host a panel on Star Wars trooping and military and service professionals, firefighters, EMTs and law enforcement officers. In the last couple of years of conventions on both sides of the Atlantic, I’ve discovered a huge number of active duty military and veterans that troop with the 501st, Rebel Legion, and Mandalorian Mercs. When they learn of my own off-screen military and homeland security connection, virtually all of these men and women share with me how trooping and their professional experience reinforce a commitment to serve others, a core value in Star Wars fandom. Especially meaningful for me was my growing appreciation of how trooping helps those dealing with combat- or stress-related issues. So I suggested the panel idea to Lucasfilm’s Mary Franklin, and I was thrilled when she accepted it. Initial help came from 501st founder Albin Johnson who put me in touch with Lesley Farquhar, the commanding officer of the Imperial Sands Garrison of the 501st Legion in Southern California. Lesley provided all the logistical support and admin and was largely responsible from putting together our panel of four. Lesley was a Navy wife. Her husband Paul was featured on one of her PowerPoint slides that accompanied the panel presentations. He was the one suited up as a Deathtrooper "driving the ship” in her engine control room. Lesley spoke of how she and Paul found the value of Star Wars as a bonding element whenever Paul changed station. “Star Wars around the globe is truly a global phenomenon,” she told the audience. “For military service members, it can be an icebreaker and provides a common ground.” One of Lesley’s fellow troopers in the Southern California Garrison, Rebel Legion, is a Navy chief petty officer, Brandon Jackson, a hospital corpsman who troops as Mace Windu. Brandon told the crowd that he’d been a Star Wars fan his whole life. “I was a nerdy kid who grew up in South Central Los Angeles, and I never fit in. Star Wars was one of my many ways to escape into my imagination.” As a nerd, he was picked on, but he “kept pushing forward” until in the Navy he found himself as combat corpsman with the Marine Corps in Afghanistan. “I had to deal with a lot of death with my two tours in Afghanistan. The loss of friends took its toll on me. I fell into a very deep state of depression. Then I found the Rebel Legion and 501st, and I started trooping and being a part of a cause that was bigger than my pain.” Brandon now has a corner in the galaxy as a painter and sculptor of Star Wars figures, of which he has fashioned scores. “I made it my goal that all of my art would revolve around Star Wars.” Chief Gunners Mate Mary Ralston, who routinely cosplays as a Fem Han Solo, gave a similar testimony. "Star Wars has always been a part of my life. As I got older my love and interest for Star Wars did not diminish, but actually became stronger -- even an integral and necessary part of my life.” When she joined the Navy and was wrenched from her family, Star Wars was a way for her “to feel some normalcy, some comfort and an escape.” As a woman with "nerdy tendencies" in a very male dominated profession, she was the subject of some ridicule. “So, I began to hide my geeky side and became a closet nerd.” As time went on, Mary found the courage to embrace it. “I recently found myself in one of my military training courses reading my latest Star Wars novel, Revan. I was receiving some of the typical snickers and jokes when someone finally said, ‘You're such a nerd, Chief!’ To which I proudly replied, ‘Yes, yes I am. Thank you!’ It was such a liberating feeling that I had. I love Star Wars, and I love being nerd!” 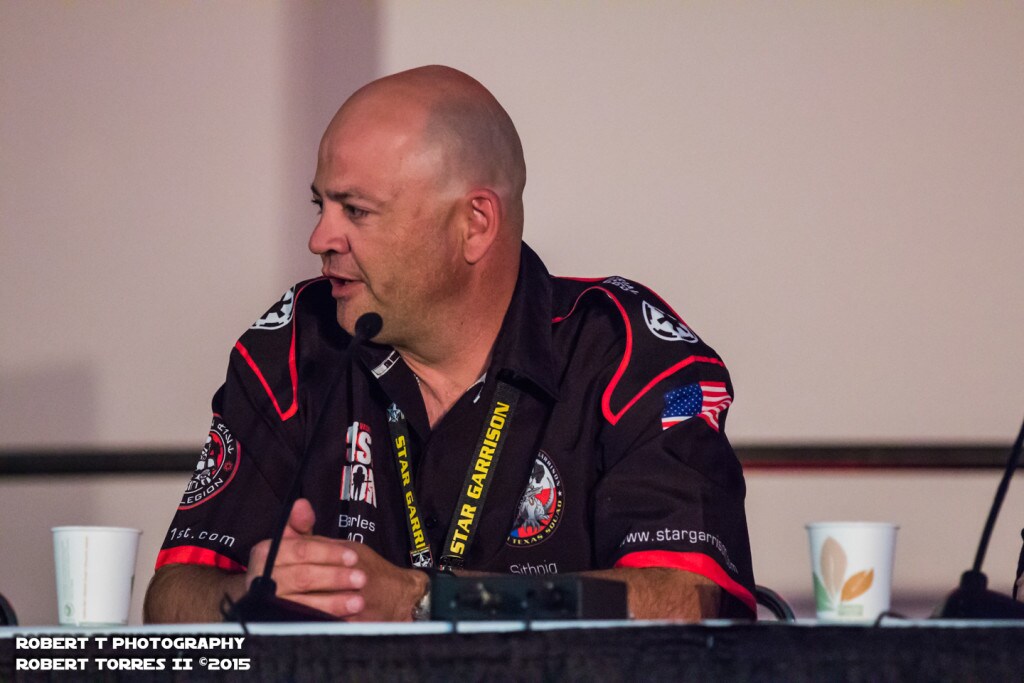 Brian Earles is a patrol deputy for the sheriff's office in Rockwall County, Texas. He troops as a stormtrooper with the Star Garrison of the 501st Legion. Brian comes from a long line of uniformed public servants. He spoke of carrying the tradition of his great uncle and grandfather who were at Normandy fighting on Omaha Beach. Brian addressed the issue of how the public sometimes profiles policemen, asking the audience if anyone had ever had a bad experience with a police officer. His nine-year old daughter was the first to raise her hand. “That got a laugh from the crowd when I called her out.” The exchange led to his making the point that it was important to him to use his love for Star Wars in doing his job. “I strive for Jedi calm when dealing with the people I encounter every day.” Tom Hutchens, Mandalore the Uniter and founder of the Mandalorian Mercs, also expressed how his love for Star Wars helped him make his way in the military. A third class petty officer in the Submarine Service, Tom values how both traditions have reinforced each other in his life. “My Navy experience and the organizational and people skills I got serving on a boat gave me the confidence and made it possible for me to start the Mercs and keep it going to this day.”

From the floor, a number of people came forward to speak of Star Wars and public service. American Red Cross representatives Debbie Pari and Rebecca O'Rourke spoke of the blood drives that Star Wars author Ryder Windham and the 501st routinely support. Their comments on need personally resonated with combat corpsman Brandon Jackson who gave example of the quantities of blood required during helicopter medevacking of wounded from the field. 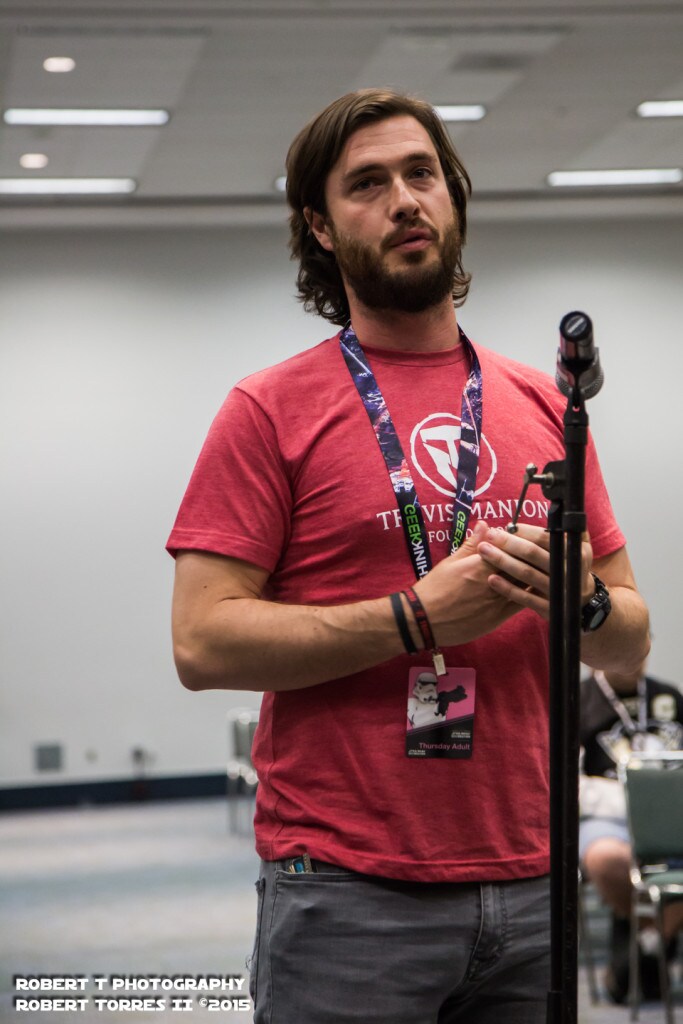 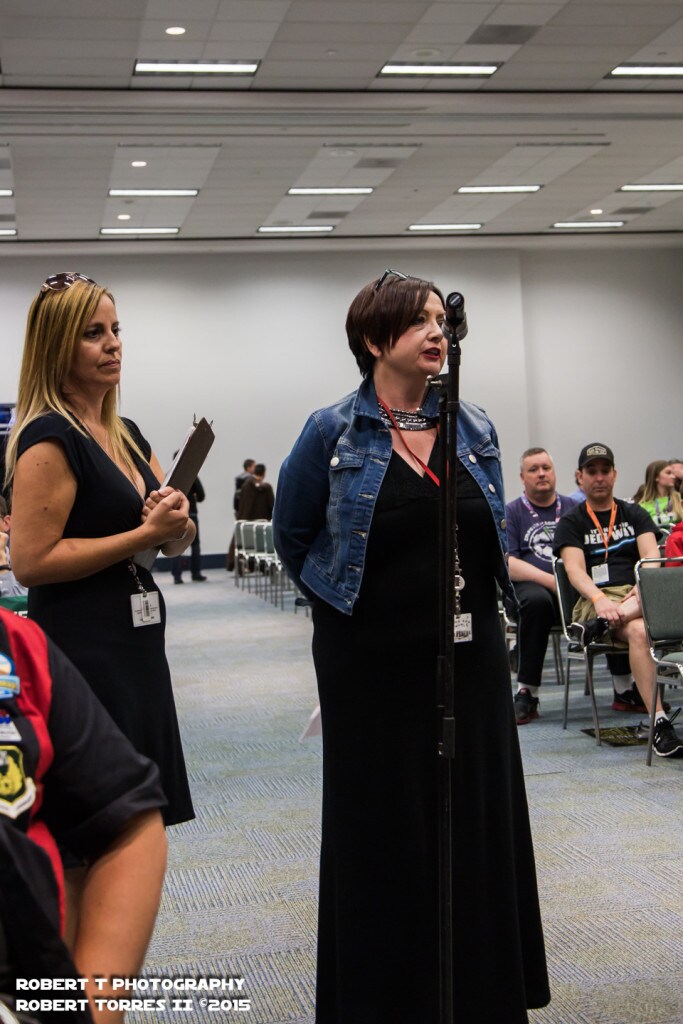 Albie Masland, a veteran outreach manager for the Travis Manion Foundation (that Dak vigorously supports), spoke of the Foundation’s work and the developing relationship it now has with the 501st. Joining him was Heather Shue of Virginia’s Tyranus Garrison. Heather shared how Tyranus and D.C. and Maryland’s Old Line Garrison raised several thousand dollars for the Foundation through their Blast-a-Stormtrooper events at last year’s Awesome Con in Washington. “The Foundation’s motto befits all Jedi,” Albie told the audience: “If not me, then who?” Star Wars Forum UK podcaster Jez Allinson served in Afghanistan with the Royal Air Force in a helicopter unit. Jez spoke of the stresses of a combat environment. Reaching into the leg pockets of his cargo pants, he produced two small Star Wars action figures — Rebel pilots — one fashioned in fabric by his sister. “I carried these into combat, and they kept me centered and sane.” 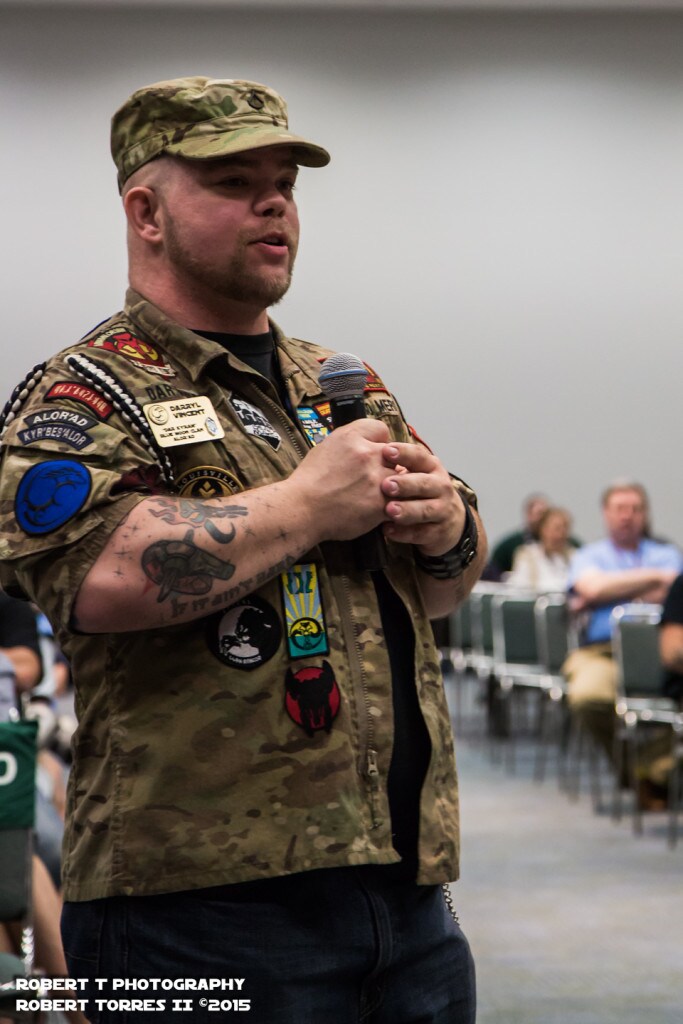 Darryl Vincent was another Afghanistan veteran. A Mandalorian Merc, Darryl — as Dar Kyram — is the CO of Kentucky’s Blue Moon Clan. Last year, a couple of months after leaving the service as a PFC in the 1st Infantry, 3rd Division at Fort Knox, he inducted Dak into the Clan. Dar spent a full year with his unit in Khost Province. “One thing I learned while deployed in Afghanistan is your brothers and sisters all have your back. There's a deep bond that is formed over there that is rare to find elsewhere. My friends in the Mercs have helped me through hard times, understanding my situation then as a low ranking soldier and now as a full time student-veteran. You can't find that kind of unity just anywhere." Another Afghanistan veteran was Army Lt. Col. Brad Striegel. Currently with the U.S. Army Forces Command, he had the last word. “Star Wars has influenced military personnel, not just at lower ranks, but at the strategic level of the military.” To make his point, Brad told the audience that the command’s four-star commanding general recently issued his thoughts and guidance in a command briefing to his troops. “One of the bullets on a slide read: 'Do. Or do not. There is no try. — Yoda.'"

Thanks to Robert Torres for the use of his images that accompany this post.

John appeared as Dak, Luke Skywalker’s back-seater in the Battle of Hoth in The Empire Strikes Back. He also appeared in the film substituting for Jeremy Bulloch as Boba Fett on Bespin when he utters his famous line to Darth Vader, “He’s no good to me dead.” Follow him on Twitter @tapcaf.